UNICEF Delivers for Families Hit by Earthquake in Haiti

UNICEF is reaching families with critical emergency supplies and humanitarian assistance after a powerful earthquake rocked southwestern Haiti on August 14.

The Haiti earthquake killed more than 2,200, injured over 12,200 and left an estimated 650,000 people — including 260,000 children — in urgent need of humanitarian assistance: food, water, sanitation, hygiene and water. Damage to infrastructure is also significant: 130,000 houses, 94 schools and 1,800 water supply systems were completely or partially destroyed.

“In the past days, the fierce earthquake has been followed by multiple aftershocks. In the south, some roads are still blocked by landslides and floods caused by Tropical Storm Grace, and some of the worst affected villages remain cut off," Bruno Maes, UNICEF Representative in Haiti, said from Les Cayes on August 23. "Our teams on the ground are doing their best to regain access and reach the remote communities with lifesaving supplies.” Within hours of the Haiti earthquake, a UNICEF convoy had delivered six medical kits to three hospitals in Les Cayes. The kits contain enough emergency health supplies — including gloves, painkillers, antibiotics and syringes — to treat 30,000 earthquake victims over three months. The kits were part of UNICEF's pre-positioned supply stock, stored in warehouses across Haiti. 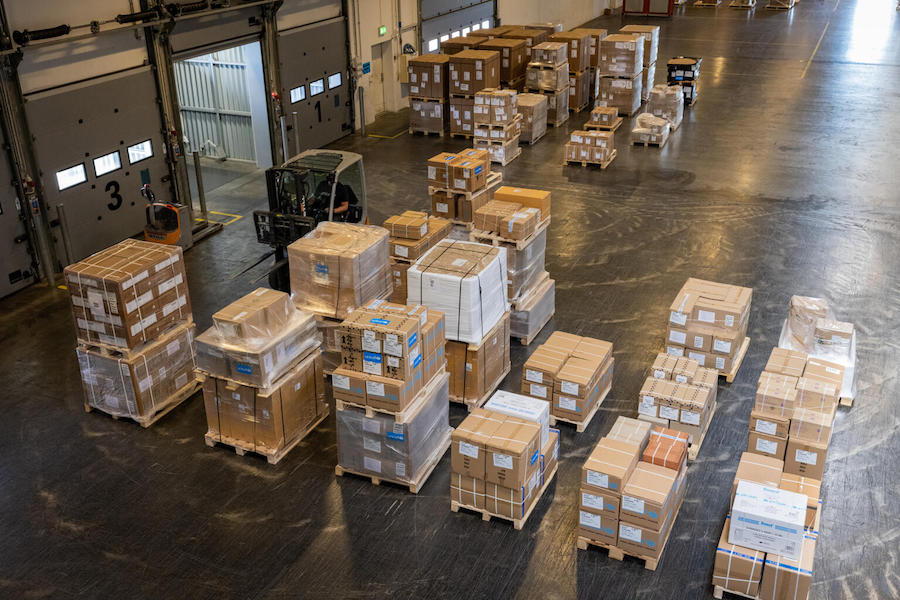 On August 23, Haiti's Prime Minister Ariel Henry and other officials were on hand in Port-au-Prince to receive a cargo plane carrying 29.8 metric tons of water, hygiene and medical supplies shipped from UNICEF's global warehouse in Copenhagen, above. The medicines, surgical equipment, nutritional supplements, 500,000 masks, 15 tents for destroyed health centers, 65,000 water treatment tablets and family hygiene kits will be critical to help families and children in Haiti survive the current crisis. On August 18, UNICEF staff confer with the Deputy Mayor of the municipality of Torbeck before the distribution of pre-positioned emergency supplies in Valere, a village in the Torbeck commune, in Haiti’s Sud Department.

Increasing levels of gang violence are complicating Haiti relief efforts. A humanitarian corridor has been established; national police escort trucks all the way to the storage point to protect deliveries from small, organized gangs of thieves who follow the trucks on motorbikes and try to loot them when the drivers stop. 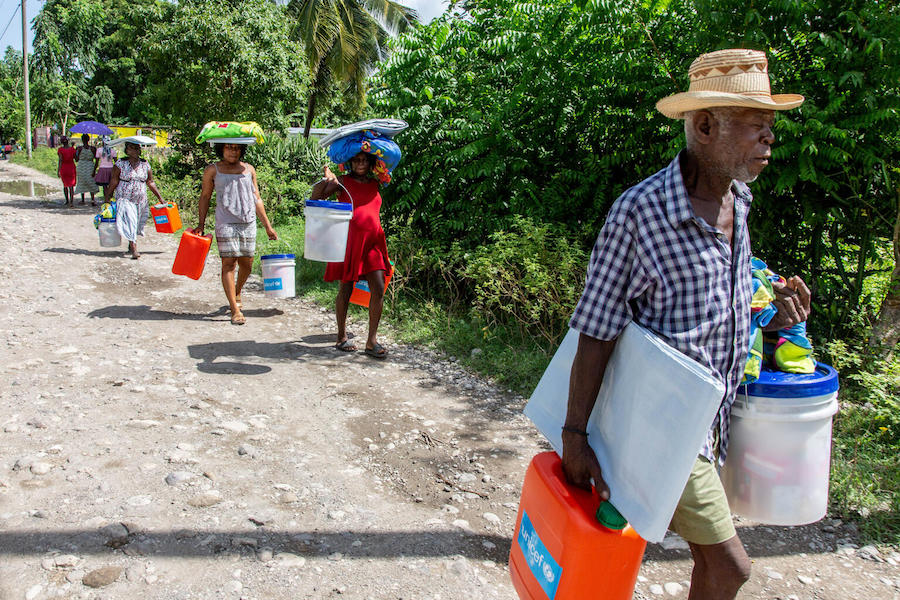 Carrying emergency supplies, people head back to their temporary shelter. Many people, fearing the collapse of more buildings, are sleeping in the open. UNICEF staff are sleeping outside or in their cars, waking after only four or five hours to start another day of helping the injured and traumatized. 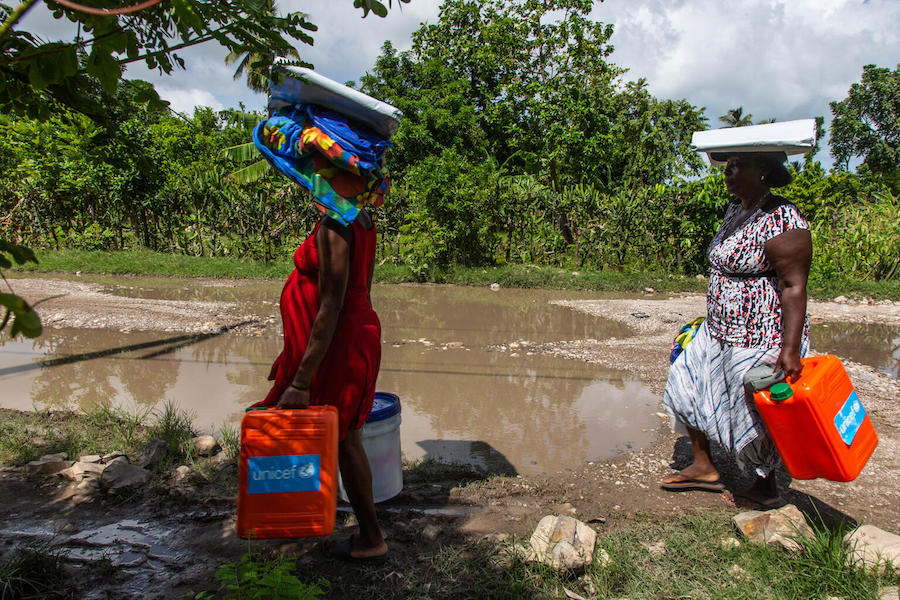 With UNICEF tarps balanced on their heads, Mera Marie Malia, a 38-year-old mother of five children who is seven months pregnant, and her neighbor lug emergency kits and jerry cans filled with safe water for their families. The tarps will be used to provide emergency shelter. 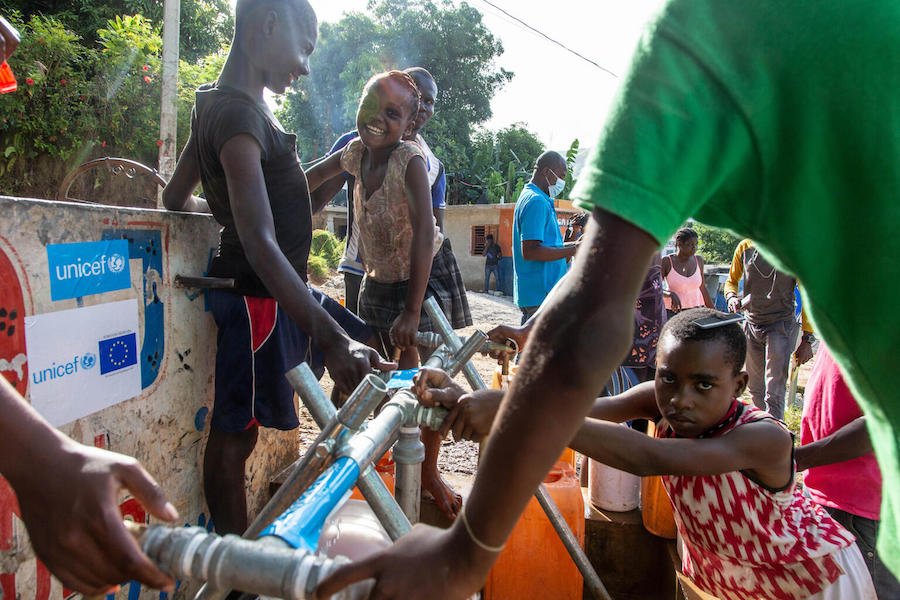 On August 18, in Marceline, near Camp Perrin district, children fill containers with clean and safe water at one of the four water stations supported by UNICEF in Les Cayes, Haiti. 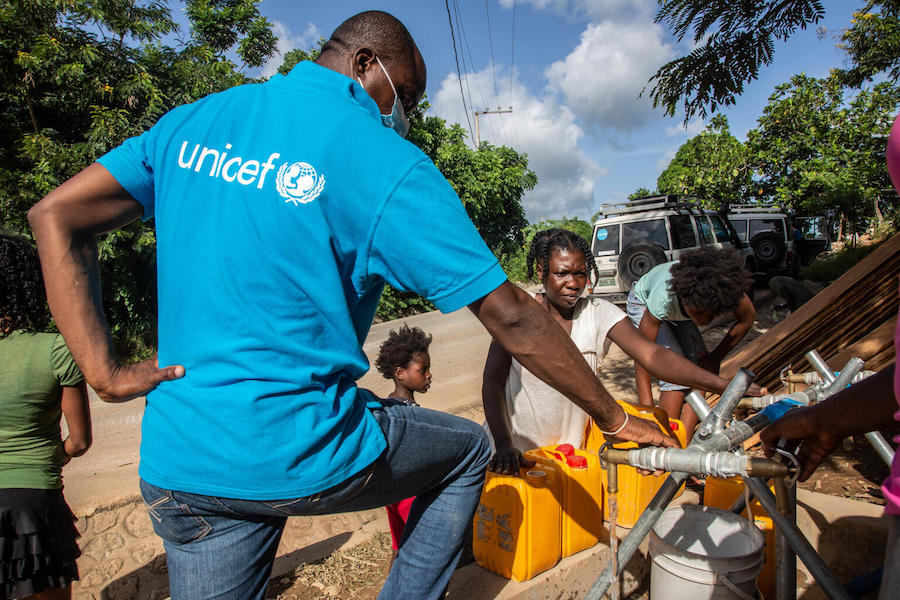 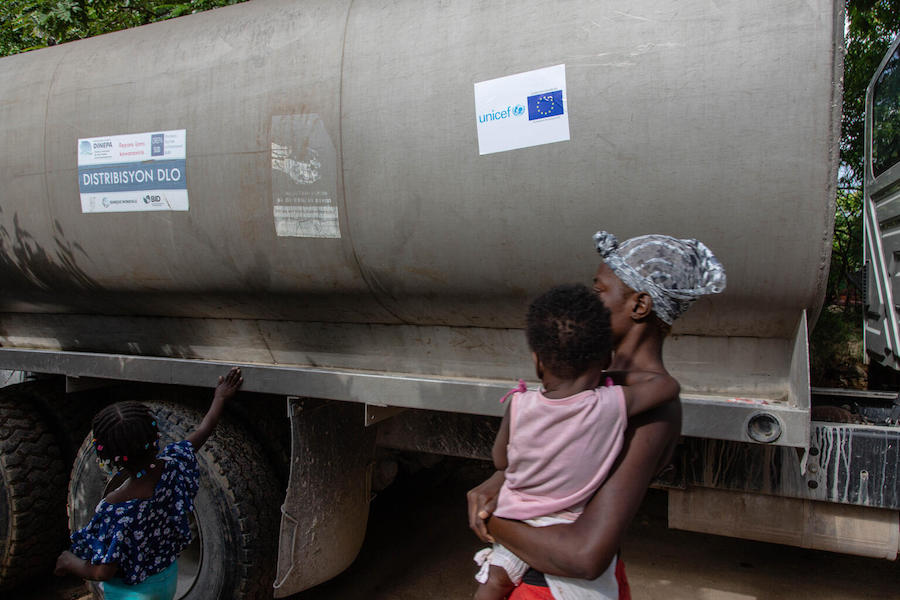 In Marceline, near Haiti's Camp Perrin district, a truck fills one of the first four water stations supported by UNICEF. 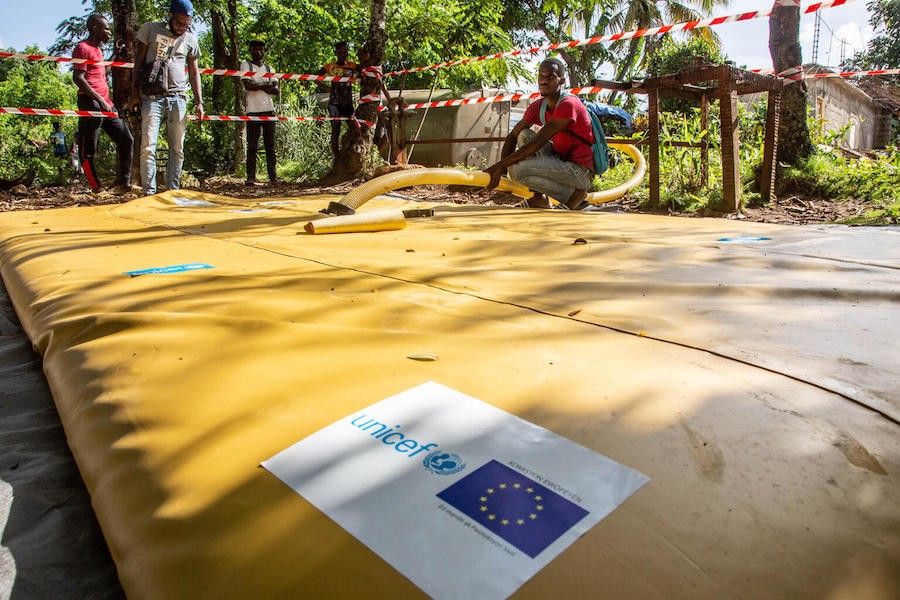 The ECHO-funded water trucks are continuously refilling at least four emergency storage bladders, each of which holds 10,000 liters of safe water for families in crisis. Plans are underway to accelerate the emergency response in the south over the next three weeks, delivering the essentials people need so they can begin the long process of rebuilding their lives. UNICEF estimates that it will need US$15 million to respond to the most urgent needs of at least 385,000 people in Haiti, including 167,000 children under the age of 5, for a period of eight weeks.

“The humanitarian needs of children and families affected by the earthquake and tropical storm have continued to grow in recent days," Maes said on August 23. "Hospitals and health personnel are overcrowded, and the medical aid we distributed this week is not sufficient. Children and families who have lost their homes are forced to sleep outside in the rain. This shipment of medical, water and hygiene supplies will be critical to save lives, and more help is on its way. But access to families most in need is still difficult.”

Top photo: On August 18, 2021, 7-year-old Farah eats a meal at a temporary shelter in Marceline, Haiti. Farah and his family spent two hours trapped under the rubble of their house after it was destroyed by the 7.2 magnitude earthquake in Haiti on August 14, 2021. © UNICEF/UN0504695/Rouzier