Conflict. Climate shock. Water scarcity and rising food insecurity. The humanitarian situation in Burkina Faso, a small, landlocked country in the Central Sahel region of West Africa, is one of the world's most violent and fastest growing displacement crises.

For more than a decade, West Africa's Central Sahel region has experienced varying degrees of violence between non-state armed groups and the government.

In 2021, Burkina Faso became the region's epicenter for violence, with the country experiencing a sharp increase in attacks on villages and abductions by non-state armed groups, who now control about one-third of the country. 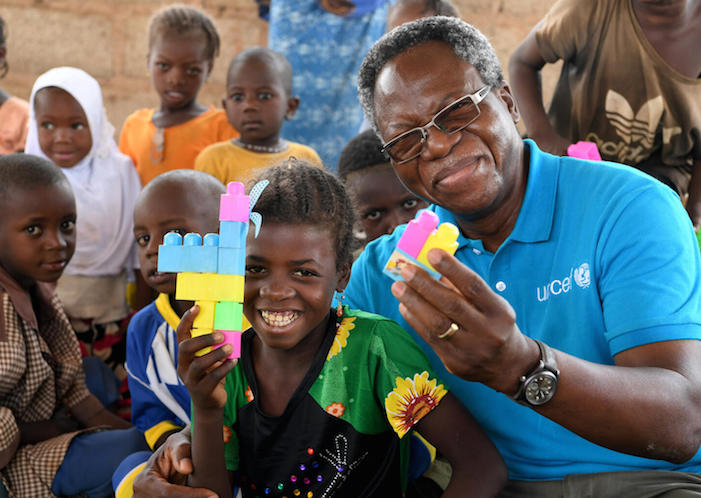 Salimata, 8, and a UNICEF staff member build with blocks at a Child-Friendly Space in Wedbare, north central Burkina Faso. Violence forced Sallimata and her family out of their village a year ago. When they arrived in Wedbare, UNICEF provided Sallimata with soap, clothing and psychosocial support. She visits the Child-Friendly Space regularly to participate in group activities with other children. © UNICEF/UN0640771/Dejongh

The violence has forced large numbers of people to flee for their lives. There are about 1.9 million internally displaced persons (IDPs) in Burkina Faso today. More than half of them are children. 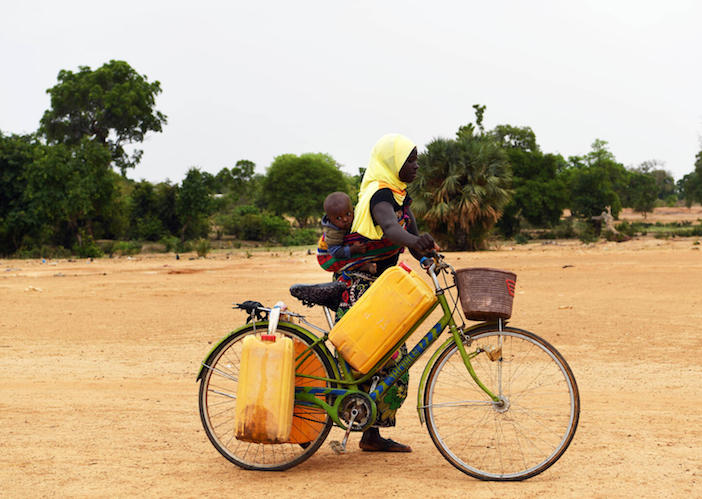 With her child on her back, a mother travels by bicycle to collect water from a well in Fada N'Gourma, Burkina Faso. © UNICEF/UN0642438/Dejongh

UNICEF's Children's Climate Change Index, which analyzes climate risk from a child's perspective, ranks Burkina Faso among the top 20 countries classified as "extremely high risk" based on exposure to climate-related shocks and their impact on children's access to essential services.

Water scarcity is significant; it's so hot that an estimated 60 percent of water contained by dams evaporates before it can be used.

Many families in Burkina Faso report that personal hygiene has become a luxury they can no longer afford. They are unable to wash their hands or their bodies because they need to drink every drop of water they can find to stay alive.

Food insecurity is on the rise 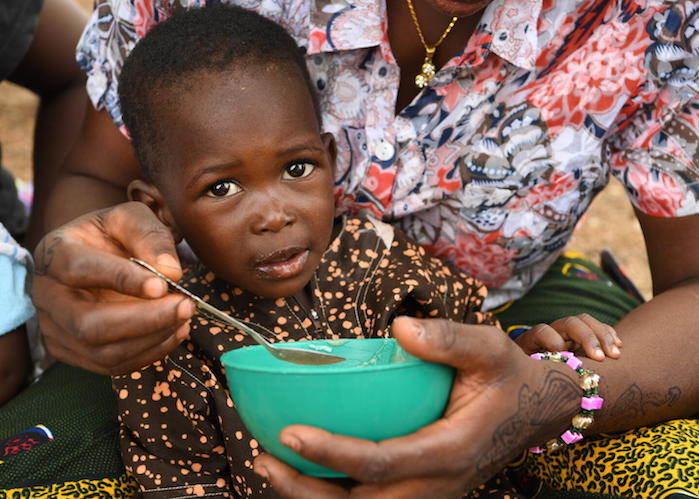 A child samples some nutrient-fortified porridge his mother learned to make at a malnutrition screening session in the village of Ngolo, in northern Burkina Faso. UNICEF distributes micronutrient powder to parents of children between the ages of 6 months and 23 months. © UNICEF/UN0640861/Dejongh

An estimated 700,000 children are acutely malnourished; more than 179,000 children are suffering from severe acute malnutrition, which can be fatal if left untreated. Five provinces across Burkina have reached emergency levels of food insecurity and are approaching the threshold for official famine declaration.

Before the start of the Ukraine war, Burkina Faso imported a significant majority of its wheat from Ukraine and Russia. With access to this supply cut off, the most vulnerable families in Burkina Faso are finding it more difficult to survive, as food prices have increased significantly.

UNICEF is on the ground in Burkina Faso, providing supplies and services to vulnerable children other organizations can't reach Aminata, 16, and her family left their home in Barsalogho in 2019 in search of safety. They settled in Kaya, where Aminata is enrolled in a UNICEF-supported school. © UNICEF/UN0640716/Dejongh

In Fada N'Gourma, a city in the eastern part of the country where insecurity is very high, waves of IDPs arrive daily, often fleeing villages surrounded by non-state armed groups that prevent anyone from leaving to get food or water, essentially starving them until they are forced to leave. The IDPs often arrive in Fada emaciated, the children dying from severe acute malnutrition. After weeks of being trapped in their village, baby Mali and her family left home in search of safety and health support for Mali who was severely malnourished. When they arrived in Fada, health workers started her on a treatment course of Ready-to-Use Therapeutic Food (RUTF). Within 12 days, she was in stable condition and on the road to recovery.

UNICEF aims to procure 130,000 cartons of RUTF this year, which would satisfy 80 percent of the country's needs. The country's appeal remains severely underfunded. In 2021, UNICEF Burkina Faso received only 23 percent of its emergency funding needs.

Your donation will help UNICEF reach children in Burkina Faso with the support and services they urgently need to survive. Please donate today.

Top photo: Children play together at a UNICEF Child-Friendly Space in Wedbare, in the north central region of Burkina Faso, in May 2022. © UNICEF/UN0640761/Dejongh