How UNICEF Supports Children on the Move From Afghanistan

As Afghanistan’s economic and humanitarian situation continues to deteriorate, many children and young people are feeling forced to go to work — often in difficult conditions. Many migrate to neighboring countries, seeking job opportunities they perceive to be lacking at home — encountering many dangers along the way, and at great risk to their health and safety.

“The dangerous journey for children across borders, especially when traversed alone, places these migrant children at risk of violence, exploitation and abuse,” Andreas von Brandt, European Union (EU) Ambassador to Afghanistan points out.

With funding support from the EU, UNICEF is providing a range of protection and support services to migrant children from Afghanistan upon their return to the country — including psychosocial counseling, assistance with family tracing and reunification, and reintegration back into their communities. Vocational training and apprenticeships are also available.

The following are a few personal accounts from individuals UNICEF has helped through these interventions while residing at the Gazargah Transit Center in Herat, Afghanistan, as recorded by photographer Mark Naftalin during a visit to the center in mid-June 2022. The names of minors have been changed at the request of the implementing partner. 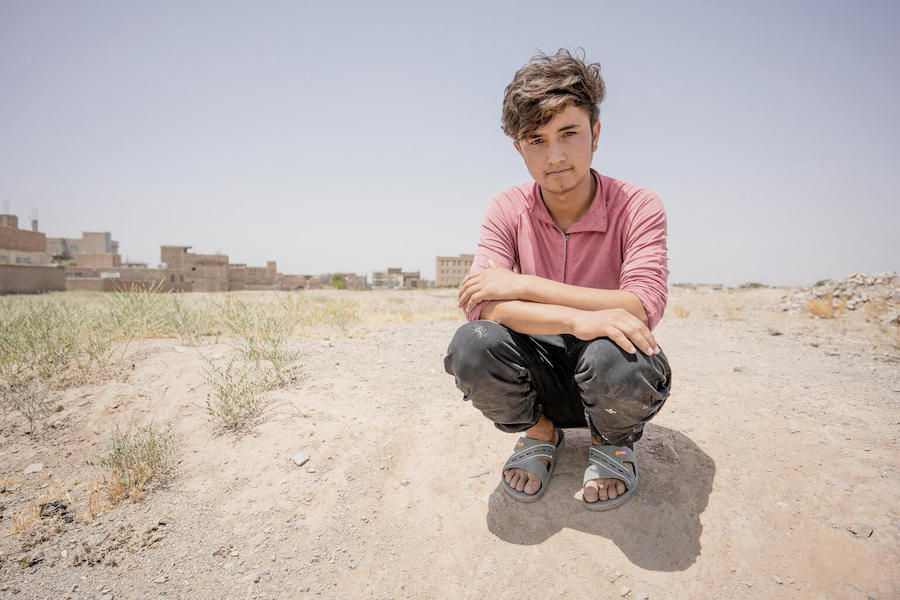 Ahmed, 17, spent four frightening months in Iran before returning to Afghanistan and landing at the Gazargah center.

"I’m so grateful to be at this center," Ahmed says. "They’ve given us lots of counseling, as well as things to wash with. We all share dormitories. You don’t realize how much you miss basic things like a comfortable bed. At night, I’ve had nightmares about trying to escape the Iranian police. It’s really scary. I fell out of bed, but when I realized where I was, I immediately felt better.

"We also play games here — it's such a welcome change from my situation in Iran, which was terrible. I’ve made friends with the other boys. We’ve all had similar experiences and it's been amazing getting to know them. I now realize it was a mistake going to Iran and I never want to return there. They work you so hard and I now know that I can get a job here. I'm so looking forward to going home and being with my family again.”

'I'm really happy to be back in my country' 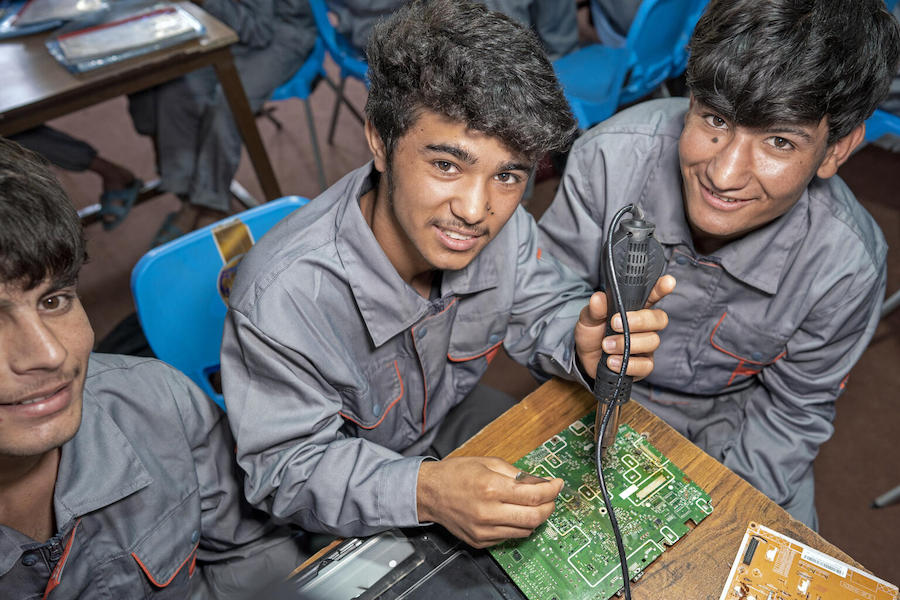 Shapoor, 16, above center, practicing new skills he's learning at the Ansari Vocational Training Center in Herat, which UNICEF also supports and where boys staying at Gazargah can take classes. Like Ahmed, Shapoor left his home in Afghanistan seeking work in Iran. "The whole thing was ghastly," he says. "I really struggled there with even basic things like food and water." Like Ahmed, he returned four months later, ending up at the Gazargah center.

"I’m really happy to be back in my country," Shapoor says. "[The center] provides everything for us, like food, a bed, football and other games, washing facilities and someone to talk to — plus I’ve met loads of boys who also migrated to Iran. We have a lot in common and we've shared lots of stories. I’ll never go back to Iran again, because I now realize that there’s actually very few opportunities there. I’ll also tell my friends back home about my experience and try to discourage them from going. My ambition is to acquire some skills and get a job here. It's really fun learning with the other guys. Perhaps one day we can all start a business together."

'The smugglers are ruthless' 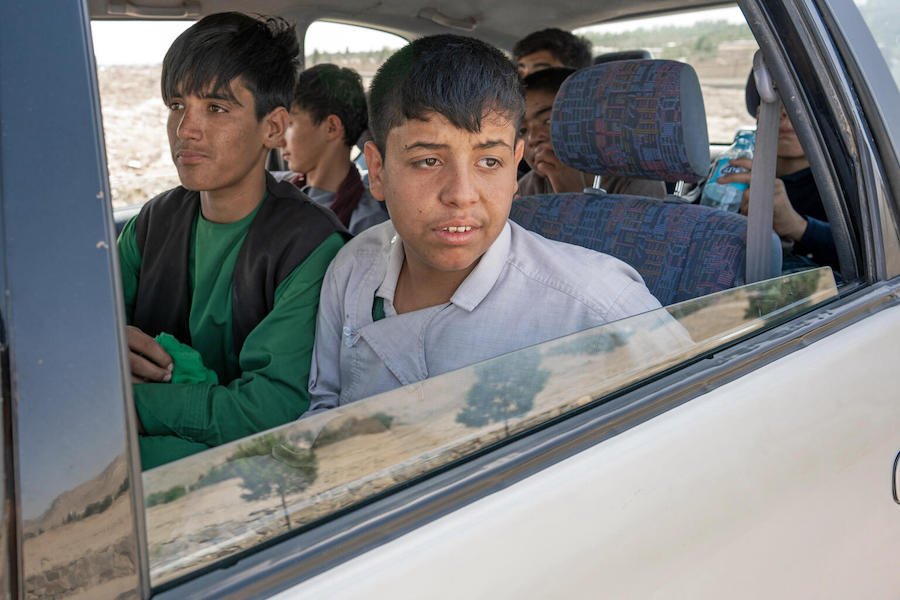 Ashraf, 13, above right, photographed while en route to the Gazargah center along with other returning migrant children, tells this story: "I fled to Iran because my father is elderly and ill, and I need to support the family. We drove to the border and walked into Iran. For three nights we were walking, running and crawling along the ground in order to avoid the border police. I've now been deported three times from Iran. The smugglers are ruthless and always beat you. It's nonstop. I keep going back though, because our family is desperate."

Ashraf continues: "One time, I fell off a cliff in Iran and really injured my back and the people I was with just left me there to die. Wild dogs kept circling me as if I was a dying animal. The last time the Iranian border force captured us they forced us to stand in the sun for seven hours in order to punish us. It was brutal. Then we were deported and I was brought to the transit center.

"I really appreciate their kindness at the center and what they have done for me. I love this place so much because it’s like a family. Everyone is so generous to us and they provide so much. One of the biggest things I’ve learned here is how to be kind to your fellow human being. I love playing with and talking to the other children here. I've spoken to the counselor and we discussed my problems and how to overcome them. I've faced so much stress and trauma, and they're trying to make me better.” 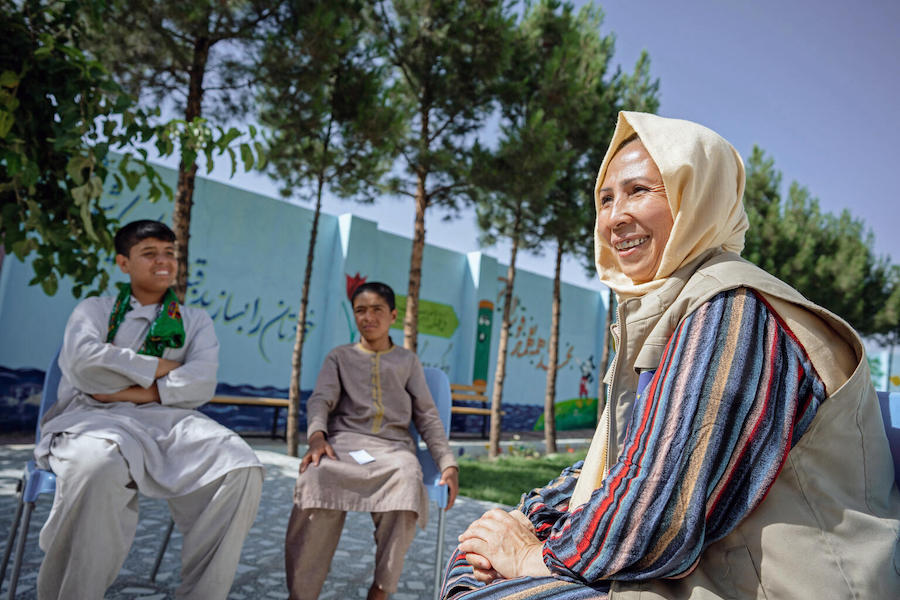 Mina Amiri, above right, is a psychosocial counselor at the Gazargah center. "It’s impossible to overemphasize the importance of counseling and psychosocial support to these young vulnerable boys," Amiri says. "These children have been through so much and they're massively traumatized. Our role is to be like a second family so that these boys understand that people care for them. We tell them about their rights — such as, no one can force them to work and no one can force them to do things [they] don’t want to do."

Amiri says that many of the boys she works with have had experiences most adults would find challenging, and that many are unaware that they even have rights.

"During the group sessions, we ask them to share their experiences and feelings so they understand that they’re not the only ones who’ve suffered," Amiri says. "It’s an important form of group therapy."

Another benefit of the group sessions, she adds, is that counselors can immediately tell who is uneasy and may be nervous, and then approach them separately and provide a more focused and tailored response. "The most traumatized can stay as long as necessary until they feel strong enough to return home. We also assign each of them a social worker who lives near their communities so they always have a support network should they need it." Above, a father and his 14-year-old son are reunited at the Gazargah center on June 16, 2022. The father, Fazel, explains:  "We've got eight members of the family to feed, and have no income here in Afghanistan, so I had to send my son away to Iran to earn some money for us all. My eyes are bad so I myself can’t work. This is the first time I've seen my son for a whole year. Now, finally seeing him, I feel like the king of the world. I couldn't ask for anything more. I’m so grateful to this center. I'd love him to learn a professional skill so he can work and support us without him having to travel to Iran."

Vaccinating children for polio in border areas and popular transit points for migrating children is another priority for UNICEF and its partners. Afghanistan and Pakistan are the two remaining polio endemic countries in the world; there is high risk of transmission of the virus when children are traveling from Afghanistan to Pakistan and back, especially if they are not keeping up with routine immunizations.

UNICEF and the World Health Organization continue to work with local partners in both countries to conduct polio vaccination campaigns. Between May 2021 and April 2022, UNICEF procured 33.5 million doses of polio vaccines to support immunization efforts in Afghanistan, vaccinating between 6.3 to 9.8 million children under age 5 during national campaigns. Permanent teams positioned at busy borders with Iran and Pakistan vaccinated 1.2 million migrating children.

UNICEF's humanitarian mission in Afghanistan includes many other interventions across all major program areas — yet remains significantly underfunded.

Top photo: Ahmed, 17, in pink (name changed), greets other adolescent boys at the UNICEF-supported Gazargah Transit Center in Herat, Afghanistan. Ahmed arrived at the center after being deported from Iran, where he spent four harrowing months as a migrant worker. At Gazargah, the boys have access to a range of services, including psychosocial counseling and vocational training. © UNICEF/UN0662963/Naftalin