UNICEF: Help Needed to Save Lives, Safeguard Futures in Afghanistan

A year since the change in political leadership, life is no better in Afghanistan, a country that has been in crisis for decades. UNICEF is there — as it has been for 70-plus years — delivering humanitarian aid and meeting urgent needs. But it can't do it alone.

Afghanistan, a country strained by decades of insecurity and devastating natural disasters, has long been one of the most dangerous places to be a child. Still, it was a very different country a year ago.

Before the Taliban seized power on Aug. 15, 2021, there were 1 million girls in Afghanistan attending high school. Women could work. The country's health system functioned. Water systems were more reliable. Measles and acute watery diarrhea weren't so prevalent. Families could put food on the table.

Today, despite an end to hostilities and the beginning of a relatively peaceful period, life in Afghanistan has deteriorated. Last summer, UNICEF pledged to stay and deliver for vulnerable children and families, and has since continued to scale up humanitarian aid, working from 13 field offices and leaning into its network of trusted local partners and decades-long presence in the country.

But Afghanistan needs more help. A lot more help. From UNICEF's standpoint, based on careful assessments across multiple program areas, the future of an entire generation of children is at stake.

Over half the population of Afghanistan — about 24 million people, including 13 million children — remains in urgent need of humanitarian assistance, according to situation reports.

Over 90 percent of the country is living in poverty. There is chronic food insecurity. Child malnutrition rates have soared, and undernourished children are more susceptible to disease. 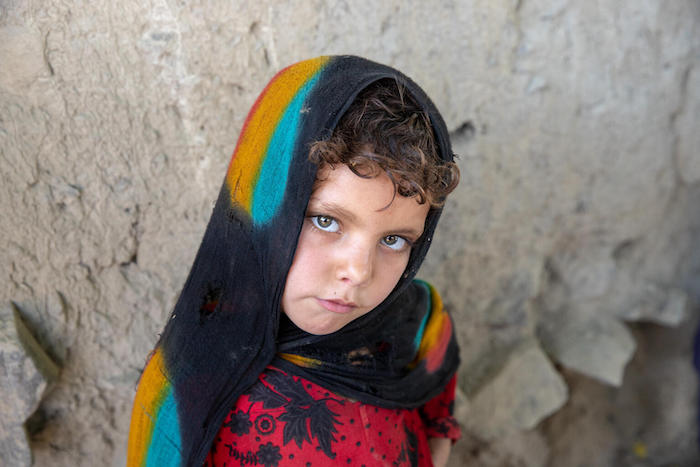 In Barmal District, Paktika Province, Afghanistan, 4-year-old Nazi received emergency support from UNICEF after surviving an earthquake that killed most of her family and flattened her home on June 22, 2022. © UNICEF/UN0665329/Bidel

Chronic drought, earthquakes and other natural disasters have pushed already disadvantaged households into deeper levels of deprivation. Desperate parents are pulling children out of school and into dangerous forms of child labor. The economy has collapsed, and the country's increasing isolation from the international community means little is being invested in its development.

Adolescent girls continue to be barred from attending school, a rollback of their rights that increases their risk of early marriage and other abuses — while also contributing to the country's economic downturn and hurting its future prospects.

UNICEF estimates that the decision to deny girls a high school education translates into a $500 million loss, or about 2.5 percent of the nation's GDP (gross domestic product). UNICEF Afghanistan Representative Dr. Mohamed Ayoya called the March 23 decision by the de facto authorities not to allow girls back to secondary school "shocking and deeply disappointing."

"Not only does it violate girls’ fundamental right to education, it exposes them to heightened anxiety, and greater risk of exploitation and abuse, including child trafficking, early and forced marriage," Ayoya said. "Now, this new analysis clearly articulates the terrible economic impact of this decision on the country’s GDP.” 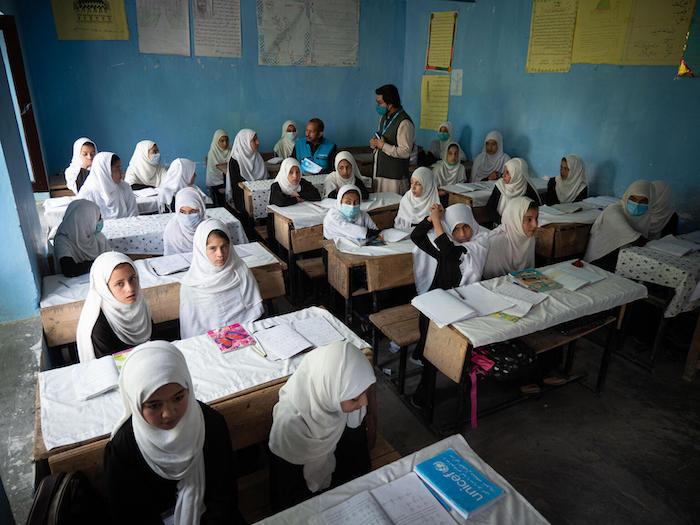 Grade 6 girls attend class at Halima Khazzan Girls' High School in Paktia province, Afghanistan. There used to be 750 girls in grades 7 through 12 at the school, but those girls have not been allowed to attend since March 23, 2022. UNICEF continues to advocate for the right of every girl in the country to complete a secondary school education. © UNICEF/UN0683672/Hubbard

Even before last August, Afghanistan struggled with over 4.2 million children out of school, 60 percent of them girls. Although the potential costs of not educating boys and girls alike are high in terms of lost earnings, not educating girls is especially costly; there are strong links between educational attainment and girls delaying marriage and childbearing, participating in the workforce, making choices about their own future and investing more in the health and education of their own children later in life.

According to UNICEF's analysis, Afghanistan won't be able to regain the GDP lost over the last year — or reach its true potential productivity — without fulfilling girls' rights to access and complete secondary school education. Put another way: if the current cohort of 3 million girls were able to complete their secondary education and if girls and women were able to participate in the job market, together they would contribute at least $5.4 billion to Afghanistan’s economy.

Not only is education a right for every child, it is the foundation for future growth in Afghanistan. — Dr. Mohamed Ayoya, UNCEF Afghanistan Representative

“UNICEF wants to see every girl and boy across Afghanistan in school and learning,” said Dr. Ayoya. “We will not stop advocating until that goal is achieved. Not only is education a right for every child, it is the foundation for future growth in Afghanistan.”

While continuing to advocate on behalf of every girl's right to an education, UNICEF has been hard at work scaling up direct humanitarian relief operations in other key areas. Despite challenges in the operating environment, UNICEF reports that it has been able to achieve measurable impact; by coordinating with the de facto authorities, UNICEF now has broader geographical access and is able to continue its programming unimpeded across the country — and reach children it wasn't reaching before. 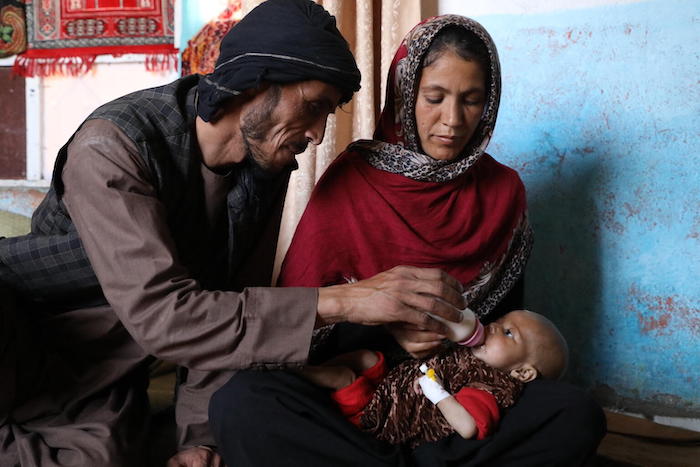 In Kabul, Afghanistan, a husband and wife tend to their 7-month-old daughter Arezzo, who is severely acutely malnourished, feeding her therapeutic milk provided by UNICEF. "I am really worried about my baby girl," the baby's father, Mohammad, said. "She is in really bad shape. I have no support to look after her and the rest of my family." Mohammed works, but only earns a dollar or two a day. It is not enough. © UNICEF/UN0679638/Munir Tanweer/Daf records

When a 5.9-magnitude earthquake devastated parts of Paktika and Khost provinces in late June, UNICEF was the first UN humanitarian agency on the ground providing aid in affected villages alongside local partners.

There have been other positive results. Between August 2021 and July 2022, UNICEF:

UNICEF to supporters: 'This is a pivotal juncture for a generation of children in Afghanistan'

More support is needed, however, to meet the targets set by UNICEF's plan for humanitarian action for children in Afghanistan — a plan to reach 15 million people, including 8 million children, with lifesaving assistance this year. UNICEF has appealed for $2 billion to meet those targets, an appeal that remains only partially funded, at 40 percent. 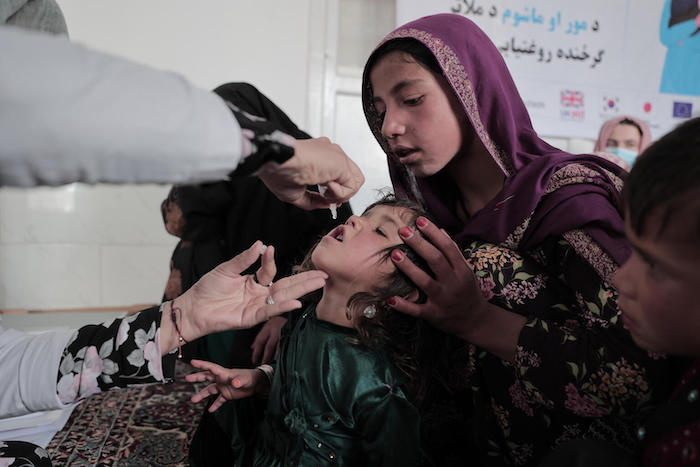 On June 11, 2022, a boy receives an oral polio vaccination provided by the Mobile Health and Nutrition Team in Alisha village, Shak district, Wardak province, central Afghanistan, a remote community that UNICEF was only recently able to access to deliver essential health, nutrition and other services, coordinating with local authorities. © UNICEF/UN0652333/Nesbitt

UNICEF is also focused on investing in long-term solutions that ensure communities can thrive long term. In addition to trucking safe water into emergency areas, for example, UNICEF also helps build solar-powered water plants. To support communities as they strive to keep schools open for high school-age girls, UNICEF is aiming to provide 38 million textbooks to schools, support training for 1,200 female teachers and expand community-based education classes from 10,000 to 17,000 by the end of the year.

UNICEF is also exploring alternative pathways to education, providing financial support to small-scale education initiatives, and helping to develop lessons delivered on tablets or via radio or TV.

Much more needs to be done to help the children of Afghanistan — to protect their rights and to secure their futures.

“This is a pivotal juncture for a generation of children in Afghanistan," Ayoya said. "Despite challenges in the operating environment, UNICEF is scaling up, delivering and achieving results like never before. As we do this, we want to say to the people of Afghanistan: we could not do what we do without your trust and support. We also thank our donors and partners for their generosity to date, but we urge them to continue their lifesaving support to children — especially with winter around the corner.” 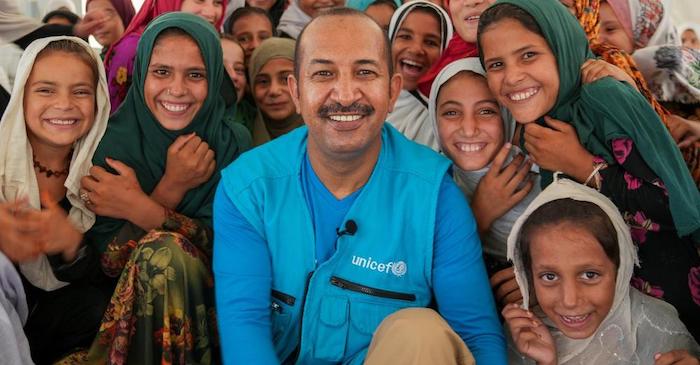 "As I reflect on the last year, and the challenges that Afghans, especially children and mothers, have endured, my message is that we salute your courage and resilience," UNICEF Afghanistan Representative Dr. Mohamed Ayoya said. "We see you; we hear you; and we’re staying here with you."  UNICEF has been on the ground in the country for 70-plus years delivering humanitarian assistance to vulnerable children and families. © UNICEF Afghanistan/2022/Omid