Like nearly everything else, the fight to free the world of polio has been hobbled by COVID-19. Though Africa's recent certification as wild-polio free is a milestone to celebrate this World Polio Day, severe challenges remain.

The COVID-19 pandemic interrupted vaccination activities, causing, for a time, an increase in polio's spread among children in several nations. Wild polio has continued to spread in Afghanistan and Pakistan, crippling a growing number of children. In parts of Asia, the Middle East and Africa, under-immunization in communities with poor hygiene and sanitation has allowed a rare form of the polio virus to make inroads, crippling children and forever changing their lives.

But throughout the pandemic, thousands of UNICEF-supported polio workers in Afghanistan, Pakistan, Nigeria and many other countries in Africa and Asia never stopped vigilantly tracking cases. And, in recent months, successful polio immunization campaigns have resumed in some of these same countries. Health workers have protected themselves and their patients by practicing physical distancing, handwashing and wearing masks while encouraging the families they've reached to follow suit.

In the coming year, that work will continue, aided by the many faces of this global effort: dedicated vaccinators, community mobilizers, parents who demand the vaccine and will go to any lengths to see that their child gets it, donors — and even children themselves. These intrepid UNICEF supporters have made all these critical activities — and the amazing progress so far — possible.

Still, responding to COVID-19 around the world has strained resources, and additional supplies are needed to safely resume vaccination campaigns. In honor of World Polio Day, please consider joining the global team now fighting for the health of every child. Just $19 is all it takes to send a UNICEF Inspired Gift of polio vaccines to protect 100 children from this highly contagious viral infection. Nine-year-old Christabel has made getting kids their polio vaccines a personal mission. After a pause of nearly six months due to COVID-19 safety measures, her home country, Ghana, just relaunched its polio immunization campaign, and Christabel didn't want any child to miss out. She got her vaccine but knew some children who hadn't, so she took matters into her own hands. She sought out a vaccination team and told them she'd help them make a house call. Following her lead, the team wended their way though a market and across makeshift bridges and open drains to a house where they discovered — and vaccinated — five children who still hadn't been immunized. © UNICEF/UN0352742/UNICEF Ghana 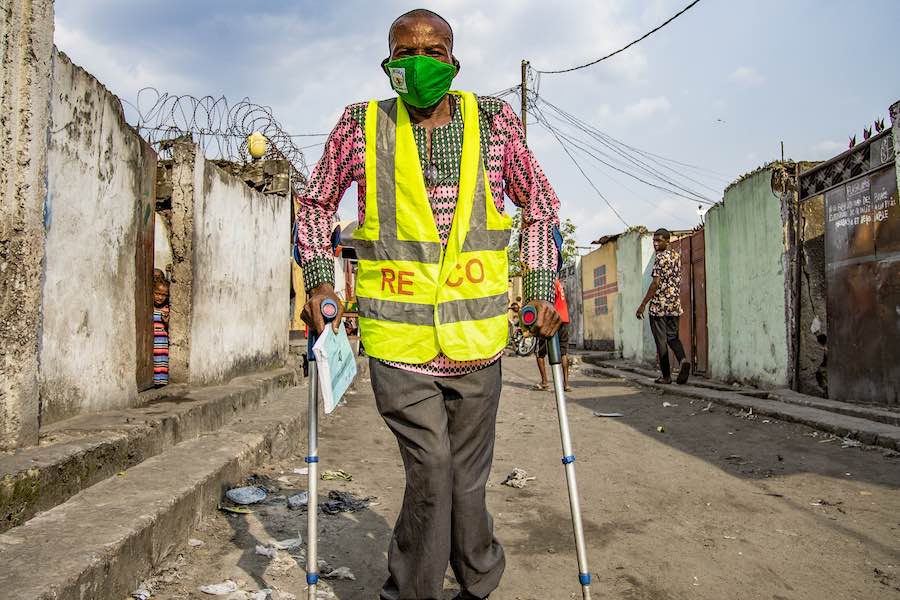 UNICEF and partners are helping the Democratic Republic of Congo, among other African countries, to resume their polio vaccination campaigns in the coming weeks. Richard Elaka, 60, a polio survivor from Kinshasa, will be working right alongside them. He was 7 when he was infected with the crippling disease and has needed crutches to walk ever since. But Richard's difficulties getting around are what's moved him to join the fight against polio. For more than 20 years, he's worked in community outreach to break down the biggest barrier to reaching every child: "I realized that many families don't get their children vaccinated because of a lack of knowledge." © UNICEF/UN0352670/Mulala 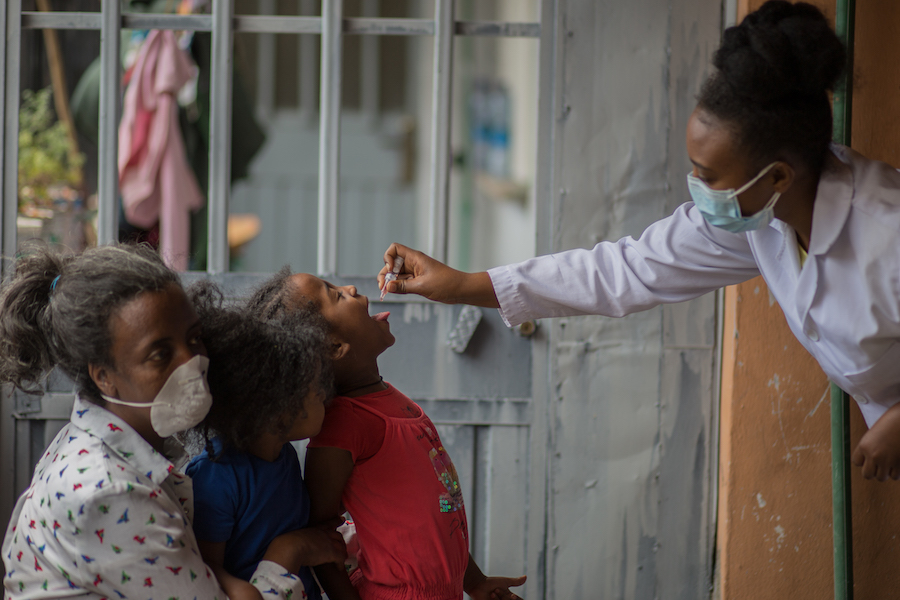 Ethiopia recently launched a four-day polio campaign to reach 7 million children. Health worker Mekdes Eyasu's personal goal is to get to 250 kids each day. Working out of the Gelan Health Center, she vaccinates children like Amen, 3, and Blen, 5, from a safe distance right outside their homes. “I wash my hands before I leave the health center. I make sure I sanitize after every door knock," says Eyasu, 23. "It is a stressful time, but it's great we could do this door-to-door. It would have been difficult otherwise.”

The many parents who have been been spared a potentially dangerous trip to a crowded clinic agree. “I heard about the vaccination on the media and I am glad that we don’t have to worry about getting COVID-19 at the health center,” says Roza Yosef. © UNICEF/UN0351450/Tadesse

Top: This young girl proudly bears the mark on her pinkie of having just been vaccinated against polio. She lives outside Abidjan in Côte d’Ivoire, where UNICEF and the government recently launched a successful polio immunization drive. © UNICEF/UNI372036/Dejongh