A Deep Dive Into Water, Sanitation and Hygiene (WASH)

New research presents a global picture of who has access to safe drinking water, sanitation services and hygiene — and who doesn't — revealing persistent inequalities. Here are five new facts from the data experts monitoring the situation, and why they're important.

Making sure that every man, woman and child on earth has safe water to drink, a hygienic toilet and the means to regularly wash with soap and water are three ideals enshrined in the United Nations' Sustainable Development Goals for 2030. They are also a big part of UNICEF's mission to improve children's health and well-being.

And while considerable progress has been made toward achieving universal access to basic water, sanitation and hygiene — the trio of WASH services — huge gaps in quality and accessibility remain, according to a new report from UNICEF and the World Health Organization. 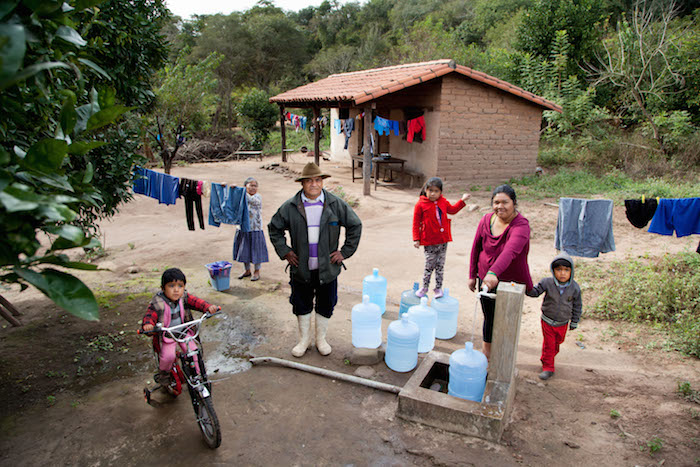 Aidi Panoso, second from right, collects water for her family at a community tap near their home In Totorenda, a Guaraní community in Chuquisaca Department, Bolivia. Aidi's father-in-law, Rene Visalla, second from left, says that running water and a toilet have brought the family safety; they no longer defecate in the bushes, where people have been known to get bitten by snakes. © UNICEF/UNI189314/Ashley Gilbertson VII Photo

“Mere access is not enough," Kelly Ann Naylor, UNICEF Associate Director of Water, Sanitation and Hygiene points out. "If the water isn’t clean, isn’t safe to drink or is far away, and if toilet access is unsafe or limited, then we’re not delivering for the world’s children.”

The inequalities that persist in both quality and access put children and their families in poor and rural communities at great risk of being left behind, Naylor adds: "Governments must invest in their communities if we are going to bridge these economic and geographic divides and deliver this essential human right.”

Here's a rundown of some of the latest facts and figures from the experts monitoring the situation — and why they matter.

From 2000 to 2017, the proportion of the world's population with proper access to safe drinking water — which means that supplies are located on the premises and are available when needed, free from contamination — jumped 10 percentage points, from 61 percent to 71 percent.

That still leaves 1 out of 3 people — or about 2.2 billion — without sufficient access.

About 19 percent have "basic" water service; that is, collecting it requires a round trip of half an hour or less. Another 11 percent — or about 785 million people, many of whom live in the world's least developed countries and mostly in rural areas — lack even basic water services. This includes the 144 million people who drink untreated surface water. 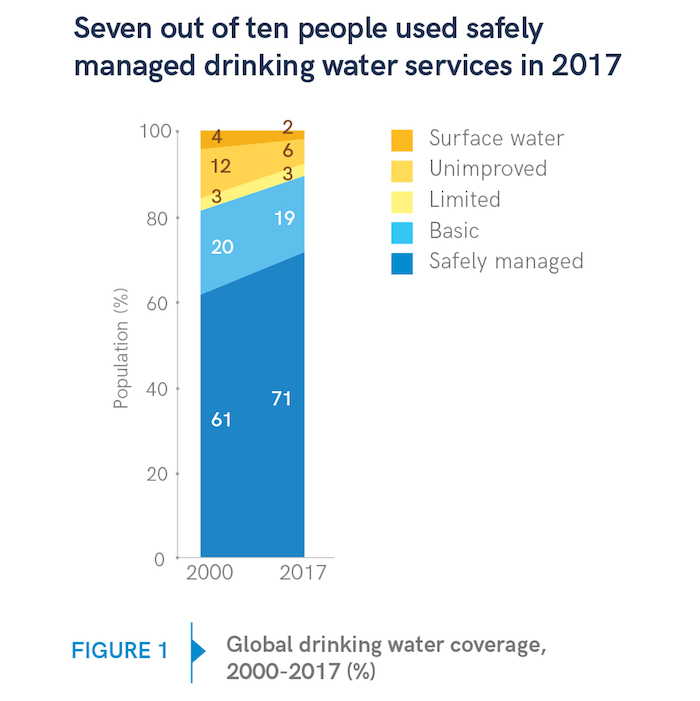 The proportion of the world's population with access to safely managed sanitation services — i.e. toilets connected to systems supporting safe waste disposal — increased from 28 percent to 45 percent. Another 29 percent had "basic" sanitation service, meaning a hygienic toilet not shared by other households.

That leaves 2 billion people without even basic sanitation — 700 million fewer than the 2000 total, but a significant number nonetheless.

If countries fail to step up efforts on sanitation, safe water and hygiene, we will continue to live with diseases that should have been long ago consigned to the history books.

“If countries fail to step up efforts on sanitation, safe water and hygiene, we will continue to live with diseases that should have been long ago consigned to the history books: diseases like diarrhea, cholera, typhoid, hepatitis A and neglected tropical diseases including trachoma, intestinal worms and schistosomiasis," says Dr. Maria Neira, WHO Director, Department of Public Health, Environmental and Social Determinants of Health. "Investing in water, sanitation and hygiene is cost-effective and good for society in so many ways. It is an essential foundation for good health.” 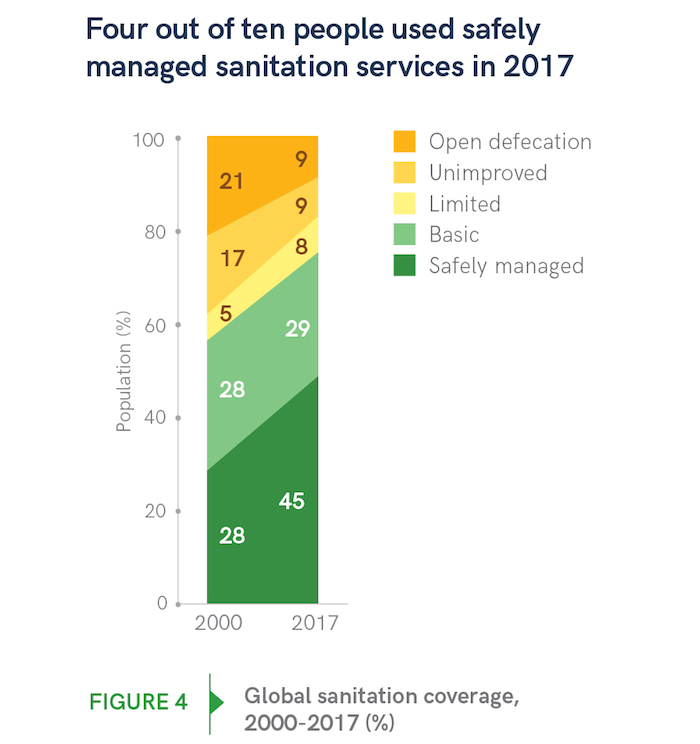 Access to services varies widely, both between and within countries.

Only 20 out of 86 countries managed to shrink by half the gap in basic service coverage between their richest and poorest citizens. And several countries were able to increase coverage in urban areas, without making comparable improvements in rural ones, widening the disparities.

Fewer countries are on track to eliminate open defecation among the poorest in rural areas.

An estimated 673 million people still relieve themselves out in the open, on the side of the road, in fields or in bushes. The vast majority, 9 out of 10, live in rural areas.

Open defecation has devastating consequences for public health. Fecal contamination of the environment and poor hygiene practices remain a leading cause of child mortality, morbidity, undernutrition and stunting. It can also negatively impact a child's cognitive development. 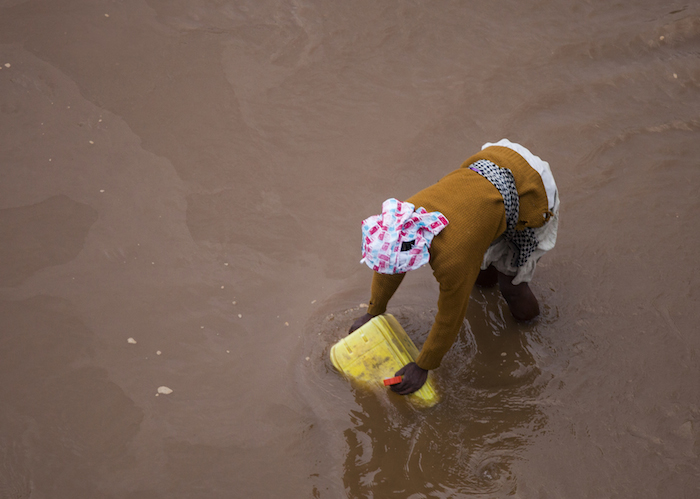 A woman draws water from a river in southern Madagascar. The prevalence of open defecation in the southern regions of the country contributes to the spread of water-related diseases; children are especially at risk. © UNICEF/UN0267012/Raoelison

In 2000, more than twice as many people were engaging in the practice, so the new figure represents progress. Assuming current rates of progress continue, however, less than half of countries where the practice is common are on track to achieve the global goal, which is to reduce its prevalence to less than 1 percent by 2030.

Even worse: in 39 countries — the majority in sub-Saharan Africa, where there has been strong population growth — the number of people practicing open defecation has gone up.

Two out of 5 people in the world lacked sufficient means to wash their hands — meaning regular access to soap and water at home — and so are missing out on one of the easiest, most cost-effective ways to prevent the spread of disease.

In sub-Saharan Africa, over 40 percent of the population lack access to even basic hand-washing facilities. 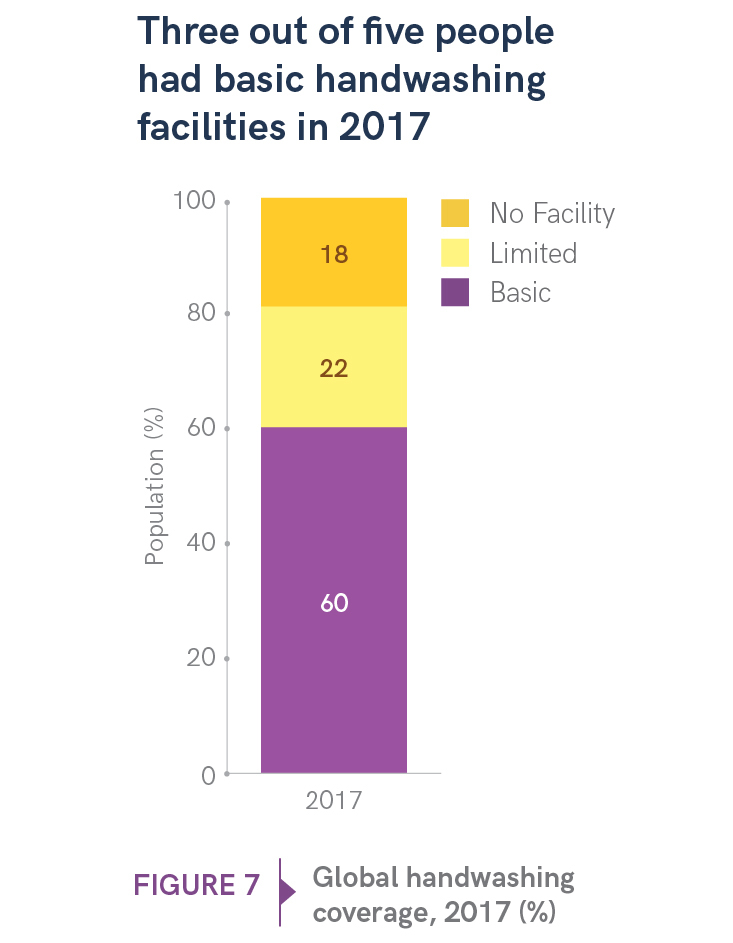 When global goals for WASH were set under the SDGs back in 2015, the challenges were well known. Even though our planet has enough fresh water for everybody, economic forces, poor infrastructure and other factors continue to deprive billions of people from one of life's essentials. 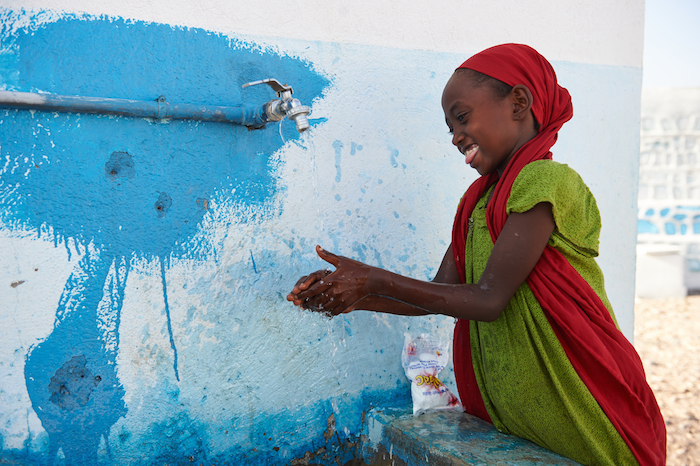 A girl washes her hands with soap and tap water outside a UNICEF-supported school in the village of Dafo, outside Tadjourah, southern Djibouti. © UNICEF/UN0199491/Noorani

In setting the SDG 6 targets, the UN called for increased investment in management of freshwater ecosystems and sanitation facilities on a local level in several developing countries within Sub-Saharan Africa, Central Asia, Southern Asia, Eastern Asia and South-Eastern Asia. UNICEF works with governments and other partners to do just that, taking into account local conditions and circumstances within each country and working to reduce inequalities.

As the UNICEF-WHO report notes, achieving universal access to safe water, adequate sanitation and hygiene will require faster progress in those countries that have the farthest to go.

To learn more: read Progress on household drinking water, sanitation and hygiene, 2000-2017: Special focus on inequalities, the June 2019 report by the UNICEF and WHO Joint Monitoring Program.

For over 70 years, UNICEF has been putting children first, working to protect their rights and provide the assistance and services they need to survive and thrive. Help UNICEF continue its work to improve access to safe water and improved sanitation and hygiene for vulnerable children and families. Your contribution can make a difference.