Getting Ukraine's Children Back to Learning Is a UNICEF Priority

The start of a new school year is typically filled with excitement and anticipation, but for 4 million children in Ukraine, this fall brings unsettling questions: Is my school still standing? Are all my friends and teachers still alive? Will I be safe in my new classroom?

Thousands of schools have been damaged or destroyed by fighting since the war escalated in February. According to the Government of Ukraine, less than 60 percent of the country's school buildings can be safely reopened. UNICEF is working with government and partners to get children back to learning, from rehabilitating schools and bomb shelters to providing education supplies and strengthening mental health support for children struggling with the uncertainty of war. 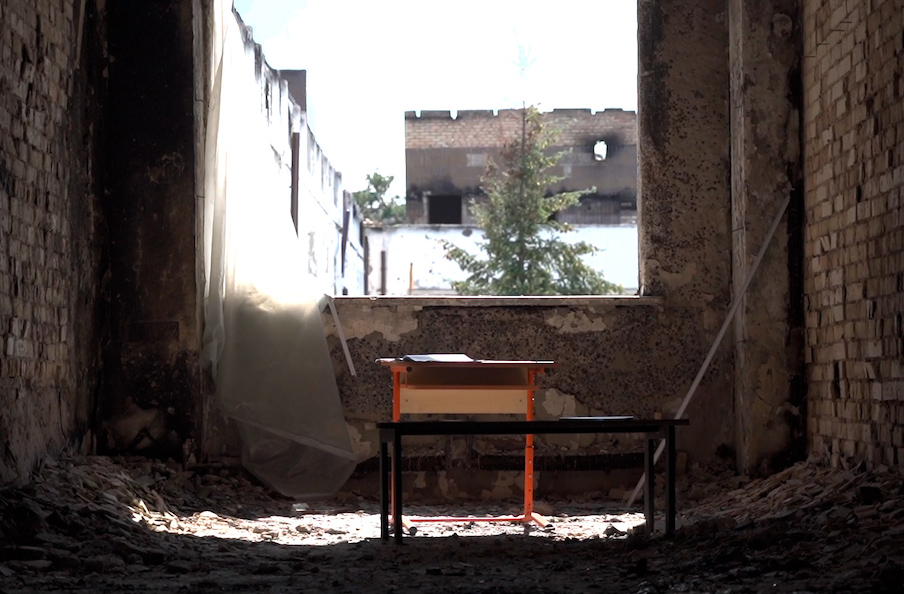 "Attacks on education are horrific because, of course, like the home, a classroom should be the ultimate place where a child should feel safe," UNICEF spokesperson James Elder says in the video below, as he leads viewers through the broken glass and twisted metal of a school building destroyed by fighting, above, on the outskirts of Kyiv. "These are the places that are meant to offer not just learning, but also social connection, a sense of security, some routine."

The threat of yet another attack is never far from the minds of the teachers, social workers and health workers who are working to see that Ukraine's children have a childhood, despite the war. UNICEF is supporting first aid training for teachers, who must be prepared to act as first responders if their school comes under fire.

More than two years of the COVID-19 pandemic and almost seven months of war have taken a heavy toll on the mental and physical health of Ukraine's children. Since the start of the war, UNICEF has been working to connect children with the services they need: more than 1.7 million students and caregivers have benefitted from mental health and psychosocial support interventions.

On the first day of Ukraine's new academic year, UNICEF Executive Director Catherine Russell visited a rehabilitated primary school damaged during the early weeks of the war. Only 300 students can attend at a time, due to the capacity of the school's bomb shelter — a mere 14 percent of the school's capacity before the war.

“Schools in Ukraine are desperate for resources to build bomb shelters instead of playgrounds, with children being taught about unexploded ordinances instead of road safety,” said Russell. “This is the stark reality for Ukrainian students, parents and teachers.”

UNICEF is working around the clock to get Ukraine's children back to learning. Your contribution can make a difference. Please donate today.

Top photo: On Aug. 31, 2022 in Zhytomyr, Ukraine, UNICEF Executive Director Catherine Russell, left, and Nina Sorokopud, Chief of Communication for UNICEF Ukraine, visit School #25, which has been heavily damaged since the escalation of the war. © UNICEF/UN0696675/Kulakowskiy. Video by Tong Su for UNICEF USA.