Amid the Horrors of War, Ukraine's Children Yearn for School

After six months of war, thousands of schools in Ukraine remain inaccessible to children — some damaged or destroyed, others used in the conflict, or as shelters for displaced people and distribution points for humanitarian aid.

One Ukrainian school that will not open its doors to children on Sept. 1 is the village school in Horenka, in the Kyiv region, which became part of the front line in February and was heavily damaged by shelling.

Today, the shattered building is a reminder of some of the most violent weeks of the war, when children had to separate from their families, grab the essentials and flee to safer places. “We left in a panic. It was very scary, but we had to,” says 10-year-old Anya, above in the ruins of her school building. “If we had stayed home longer, we would have been dead."

A shell ripped through her family's home just a few days after they left. “The war destroyed our house, which we had just built."

Anya says she hopes to go abroad with her mother. She no longer feels safe in Horenka. 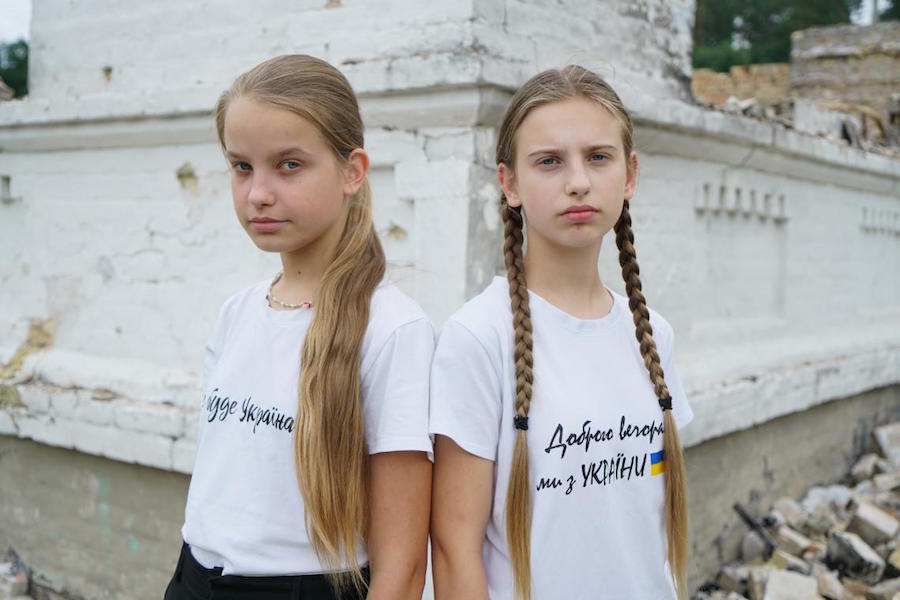 Olena, the mother of three girls – 11-year-old Liliya and 13-year-old Nelya, above, and their little sister, Lyuda – always keeps an emergency suitcase packed and ready to go. 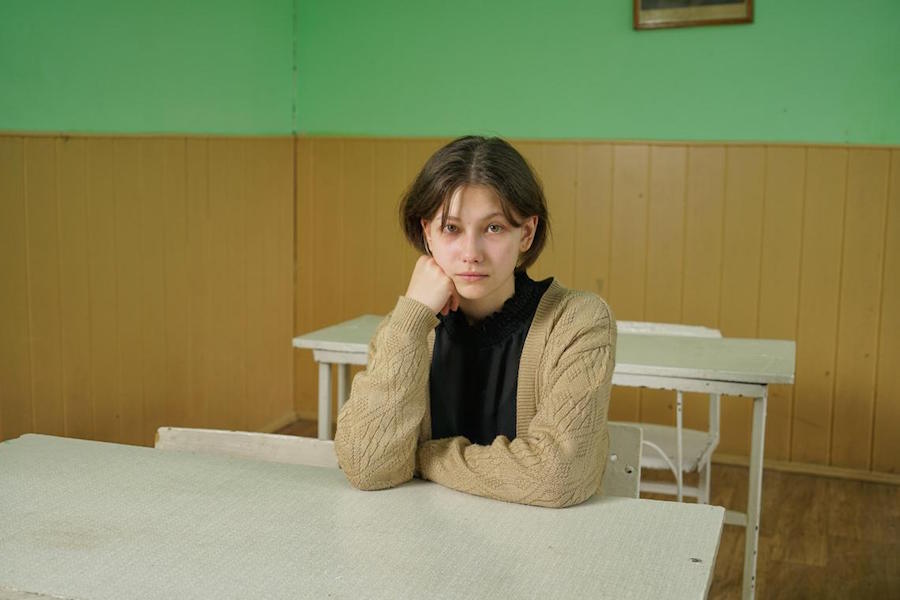 Sixteen-year-old Yana, above in one of the classrooms that remains standing, hid for two weeks in the basements of various houses. She left Horenka when it became impossible to stay. Her home —  windows, doors and fences — suffered damaged amid the hostilities.

"War is a horror that breaks people's lives, their property gained over the years and their mental state," Yana says.

Memories of her old school building fill her with sadness. “I studied there since the first grade,” she says. “Everything was so familiar when I used to go there. Now it's all gone.” The section of the school where the youngest children had their lessons was completely destroyed. Lyuda, above, cried the first time she saw her school in ruins, thinking about all the things that were left inside: her jacket, her shoes, her teddy bear. 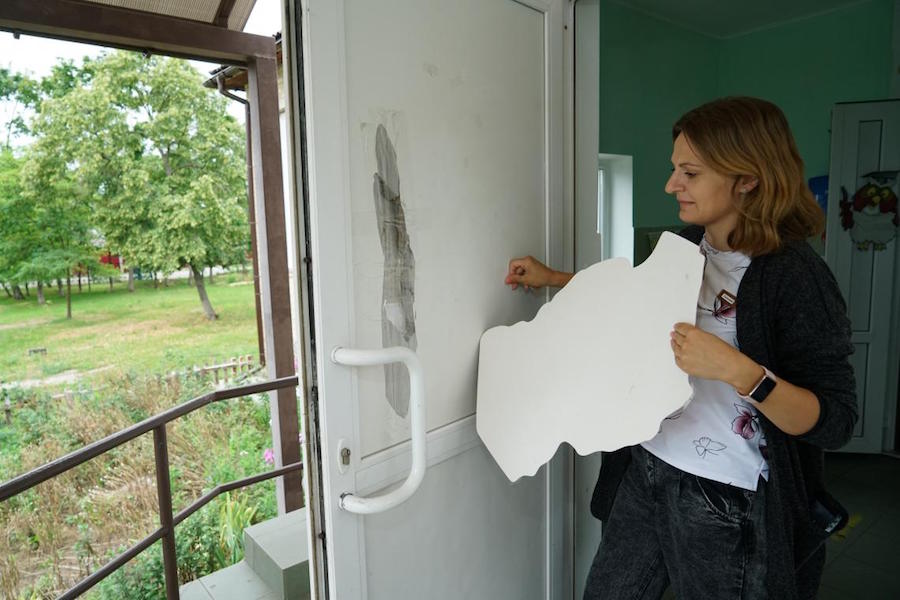 Despite the war, teachers in Horenka have not stopped teaching. They have continued to support children in bomb shelters and in other countries.

“Our class teacher would prepare food for the people in the shelter and, at the same time, she would give assignments and check the lessons,” Olena says. “It was a thin bridge to a peaceful life when assignments came from the teachers and homework had to be completed.” 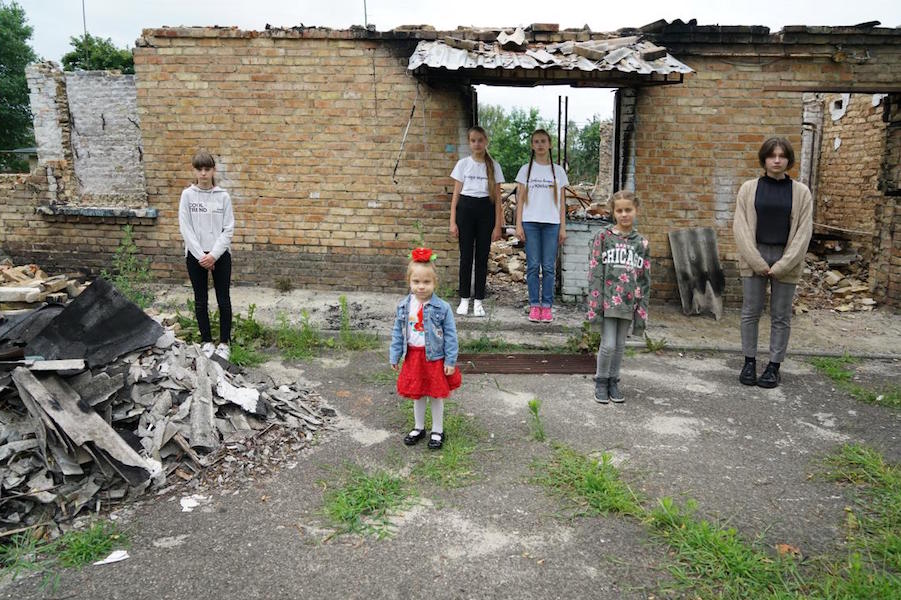 Nelya and Liliya would much rather learn in school. One of their biggest dreams is to walk into their old classroom and sit down to a lesson. "We miss our teachers, our classmates, our school," Nelya says.

Every child has the right to a quality education and a safe learning space. Education is essential to a child's well-being, development and future prospects. It transforms lives and builds better communities, creating stability and prosperity.

UNICEF is working with the Government of Ukraine to get Ukraine's children back to learning, in classrooms when it is deemed safe, and through online or community-based alternatives if in-person is not possible. Some 760,000 children have received formal or nonformal education since the war began. More than 1.7 million children and caregivers have benefitted from UNICEF-supported mental health and psychosocial support interventions.

UNICEF is rehabilitating schools, providing laptops, tablets and supplies to teachers and students; and providing guidance to children and teachers on how to stay safe in wartime.

Help UNICEF reach Ukraine's children with the support and services they urgently need. Your contribution can make a difference. Please donate.

Top photo: Lyuda stands amid the rubble of her school in Horenka, a small village in the Kyiv region of north-central Ukraine. The building was heavily damaged by shelling. © All photos by Olena Hrom for UNICEF