After a Sierra Leone militia group that forced Mohamed Sidibay to kill or be killed let him go at age 10, he had no home, family or food. He did have UNICEF.

In honor of Black History Month, this story is part of a series highlighting the invaluable contributions of African-Americans and the broader African diaspora to UNICEF's work to support and protect children around the world.

Mohamed Sidibay was 5 the day a Sierra Leone militia attacked his village, killed his family and forced him to join their forces. He spent the next five years dodging death as a soldier for the Revolutionary United Front (RUF), longing to be free. But when his freedom was finally secured as the war was winding down, he discovered that after living constantly on the move with his regiment, he suddenly had nowhere to go: “I didn't have a home…. I didn't have food and I didn't have a family.”

Sidibay did, however, have UNICEF, which gave him a chance to make up for lost time by enrolling him in school.

“If it hadn’t, my life would have been different,” says Sidibay, who’s now living in New York City and attending Fordham Law School. “In three years, I am going to be a lawyer. Without UNICEF, that could have never happened. In fact, everything I've been able to achieve through my education is because UNICEF was there.”

Today, in conflict zones around the world, tens of thousands of children are trapped in the very life that UNICEF helped Sidibay leave behind. Many have been taken by force, while others, who are displaced or living in poverty, may have joined an armed group because they felt they had no other choice.

According to a United Nations Security Council study of 20 conflict-ridden countries, their numbers are rising. In Somalia, South Sudan, the Syrian Arab Republic, and Yemen, the ranks of children serving as fighters, cooks, porters, messengers and spies have swelled to alarming proportions. In the Central African Republic, just one of the countries riven by conflict, the verified cases of children enslaved by fighting are four times what they were in 2016.

Whether forced to fight or serve as sexual slaves, these children struggle to stay alive under the most desperate circumstances. But, as Mohamed discovered upon his liberation from the RUF as the war in Sierra Leone was winding down, surviving peacetime as a former fighter is no easy task.

The recruitment and military deployment of children is a grave human rights violation. However, former child soldiers are often ostracized for their associations with the groups that exploited them. And though Mohamed and thousands of children like him received assistance from groups like UNICEF and the United Nations Disarmament, Demobilization and Reintegration (DDR) program, children who are traumatized by the violence they've experienced and forced to perpetrate find adapting to civilian life a painful uphill battle.

Here, Sidibay talks about his strategies for survival, a childhood cut short, and the forces — both good and evil — that have made him who he is today.

The war took my smile, and I have spent the last 16 years trying to reclaim ownership small.jpg 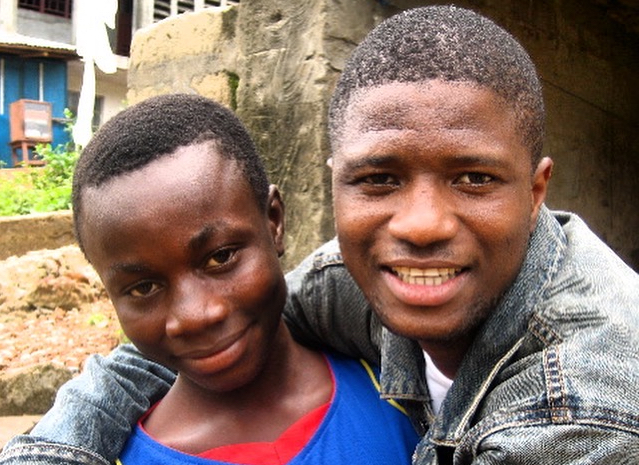 After he was freed, Sidibay, here with his mentor, Andrew Benson Green, in the early 2000s, was homeless in Sierra Leone's capital, Freetown. "Angry at what war had done to our country, Andrew still believed there were people in the world willing to fight to prevent what happened in Sierra Leone from ever happening again. At the time I couldn't fully grasp what he meant, but now I do," says Sidibay.

What was your life like before the RUF attacked your village?

MOHAMED SIDIBAY: Our small village — that was my world. Everyone was always happy. People weren't rich but at the same time, people were content. I had a sister and brother who were much older. All I did was play. I loved to run. Because running was fun. Either I was smart talking someone and they chased me, or I decided to run to do something.

Was your family home the day that the RUF came?

MOHAMED SIDIBAY: Everyone was at home. And it was complete chaos.

MOHAMED SIDIBAY: Playing. And even though the sound of chaos was coming from where home was, I still ran in that direction because as a kid when something scares you, you go home because home is your safe place. When I arrived, they'd already captured people and split them up into two groups. I was going to go where I saw my family sitting but someone shoved me to the other group that was mainly kids and very young people. The fighters picked up their AK-47s and shot all the people on the side where my family was. Then they put us in the back of a van and took us away.

You were five years old, That’s so hard to imagine.

MOHAMED SIDIBAY: As we drove away, I remember thinking it felt so different. There was always smoke in my town because people use firewood to cook outside. But the smoke that I saw this time as we drove away was not smoke that came from people preparing supper. It was smoke from houses being burned.

The pain of dreams deffered and the guilt of dream realized small.jpg 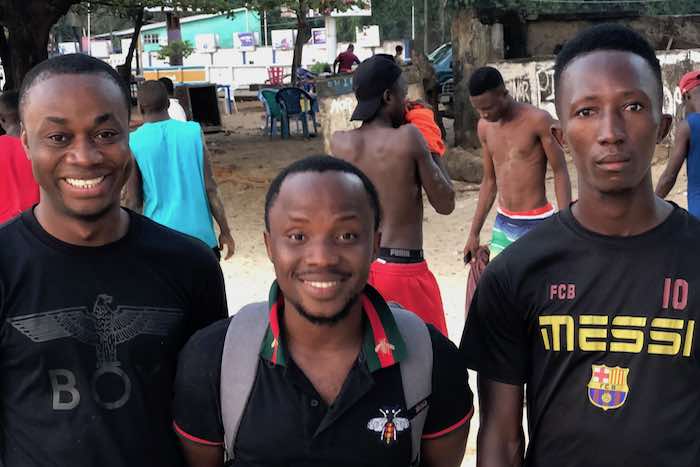 During a recent visit with these childhood friends from Sierra Leone, Sidibay (left) says he listened more than he spoke: "Spending time with them was bittersweet — mainly bitter. The hardships of their lives felt both familiar yet foreign. As they talked about their hopes for a brighter future, their voices told a different story, and I wondered at how my dreams of an education could have come true while theirs have been deferred."

Were friends of yours conscripted along with you?

MOHAMED SIDIBAY: Some of the kids who were running with me were. They were a little older than I was and they did what they could to help but [once we arrived at the RUF camp] we were presented with two choices, kill or be killed.

Did you ever think about trying to escape?

MOHAMED SIDIBAY: I attempted to run away a couple of months later but was captured, and I have a lot of scars on my body, where they dropped lit plastic on my skin. I think I was supposed to be killed. But the commander thought that it would instill more fear if I was kept alive.

So, after experiencing that, as a six-, seven-, or eight-year-old, staying with the RUF seemed like the only way to stay alive.

MOHAMED SIDIBAY: I wanted to run away, but there was this guy, his name was Rambo. In my opinion, he was the devil disguised as an average Joe. I remember him walking around, saying, “We are family. But in our family, we do not forgive and we do not forget." I watched most of the people in my village who were part of that crew die in battle. That was life.

How did you finally get away?

MOHAMED SIDIBAY: In early 1999, the rebels tried to take over the capital and a lot of the leaders were killed and people started asking why were they fighting and who were they fighting for. There was an influx of nonprofit organizations and one of them, the Family Home Movement, began negotiating with the armed groups to let us go. An arrangement was made with the United Nation’s DDR program and we were disarmed.

MOHAMED SIDIBAY: For four years after the war, food and shelter were my number one priority. The Red Cross came in to find our families, and I was placed with some people but discovered that the only thing we had in common was our last names. Then I moved around to a few different centers set up for former child soldiers. The thing about poverty is it prevents you from dreaming. It's not because you're not smart it's just that you're constantly worried about what you're going to eat and where you're going to sleep. And so all your imagination and your energy goes into survival.

While we come from different backgrounds, it is our fight against injustice that unite us small.jpg 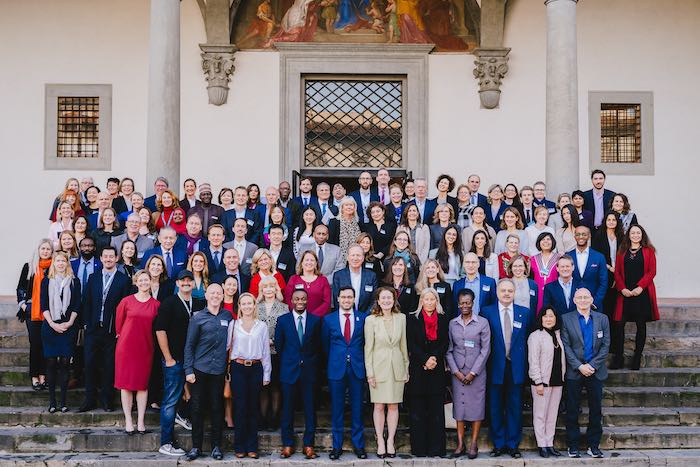 At UNICEF’s International Council Meeting this past November, Sidibay (front row, fourth from left) joined the gathering of UNICEF partners, which for the first time included the 46 young people now serving as UNICEF’s Youth Forum who presented their recommendations for how to address the most urgent issues facing children, including the topic close to Sidibay’s heart: education. "While we come from different backgrounds, it is our fight against injustice that unites us." © UNICEF

Where did you feel safe?

MOHAMED SIDIBAY: School. It was the only place where parents weren't telling their kids not to mingle with me. Though I was often late. I was homeless, so  I often slept on people’s verandas, and if I came late I didn't have to stand in the assembly line and get punished for having beaten up shoes, old socks or a wrinkled uniform.

When did you begin to believe that you actually had a future?

MOHAMED SIDIBAY: Once I started liking school, I discovered I wanted to be a lawyer, thinking law was a way to bring about effective change. What I'm hoping to gain from law school is to be able to go back and help my country develop a strong judicial system. Sierra Leone took everything away from me. I want to help make sure that she gives more than she takes from the next generation.

We are a reminder of what the future could look like when children on the move are giving an opportunity small.jpg 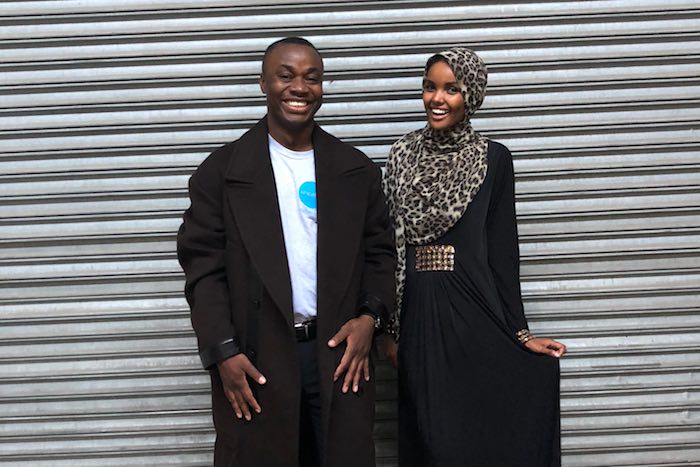 Sidibay appeared with UNICEF Ambassador Halima Aden in the September issue of CR Fashion Book. Born in Kakuma, a refugee camp in Kenya, after her family fled civil war in Somalia, activist-model Aden is working to engage young people in support of UNICEF. “We are a reminder of what the future could look like when children on the move are given an opportunity,” says Sidibay.

We look forward to the day you graduate and are able to begin that important work. In the meantime, though, you continue to support UNICEF and are active as an advocate for two education groups, the Global Partnership for Education and the Education Commission.

MOHAMED SIDIBAY: I'm a byproduct of a fortuitous education. But no child should ever have to rely on chance to receive an education. My goal is to ensure that mine is the last generation to talk about children being deprived of quality education. I want every kid, from Sierra Leone to Somalia, to have the same opportunities as the kid in Scandinavia or in Northern Europe or even the U.S. Education is every child’s right.

Learn more about how UNICEF is helping children released by armed groups reintegrate within their communities and resume their education.

Please support UNICEF's work around the world to free child soldiers and reunite them with their families.

UNICEF and partners are working tirelessly in Sierra Leone, Syria, Yemen, Bangladesh and around the world to save and protect children. With a presence in 190 countries and territories, UNICEF has helped save more children's lives than any other humanitarian organization in the world.

Top photo: In June 2018, Mohamed Sidibay joined a panel discussion during an event dedicated to the protection of education in conflict organized by the Directorate-General for European Civil Protection and Humanitarian Aid Operations as part of the European Development Days. © EDD Brussels