More Than 200 Children Released by Armed Groups in South Sudan

More than 200 children were released by armed groups in a ceremony in Western Equatoria State, South Sudan on April 17. This was the second release of children in a series, supported by UNICEF, that will see almost 1,000 children freed in the coming months. The 207 children released (112 boys and 95 girls) were from the ranks of the South Sudan National Liberation Movement (SSNLM), which signed a peace agreement with the government in 2016 and is now integrating its ranks into the national army, and from the Sudan People's Liberation Army-In Opposition (SPLA-IO).

During the ceremony, the children were formally disarmed and given civilian clothes. The children will be provided with medical care, counseling and vocational training as part of the reintegration program. UNICEF and partners will ensure that in addition to learning job skills, the released children will receive age-specific education services in schools and accelerated learning centers. While they await reunification with their families, many of the released children are living at the Tindoka Childcare Center in Yambio, Western Equatoria. Below, some of their stories: 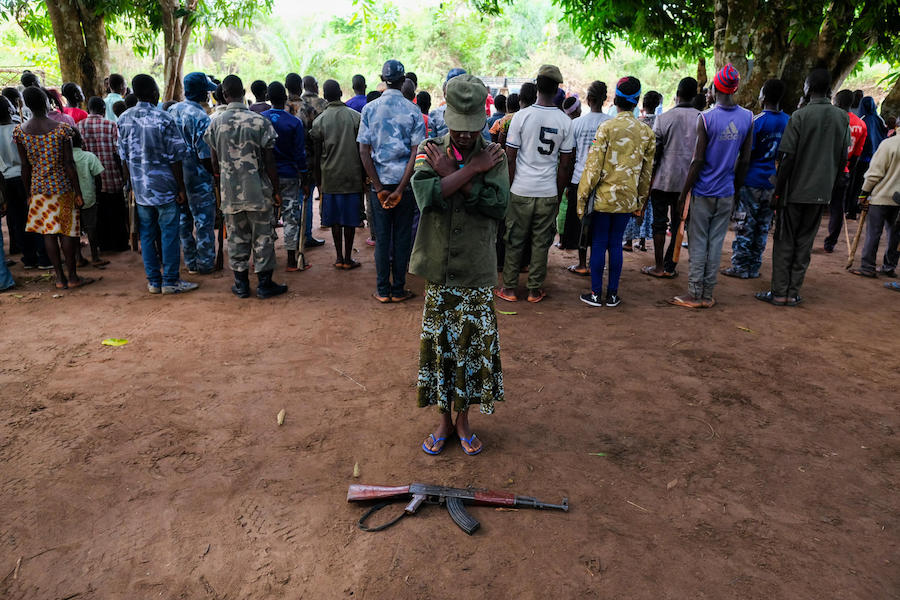 Nawai*, 15, was walking home on the side of the road with her two sisters in 2016 when they were surrounded by armed men and abducted. "They were waiting for us to come back so they could take us," she says. The girls were taken to a nearby base, and forced to work for the fighters. After a few days, the men returned Nawai's youngest sister to the village, because she couldn't stop crying.

For two years, Nawai shared a small room with other abducted girls and cooked, cleaned and fetched water for the armed men. "One time I was asked to collect water, and when I came back, the men said I took too long," she says. "They threatened to burn me." Now that she has been released, Nawai wants to return to school. English is her favorite subject. She does not know if she will ever see her parents again. Musa* is 14 years old. Years ago — he's not sure how many — he and his sister, who is two years older, were apprehended by gunmen and taken to the bush. They stayed with the armed group until earlier this year. "The older men in the group usually took their guns and attacked villages. They killed people and looted," he says. Musa never carried or fired a weapon. He and his sister were forced to do chores like cooking, cleaning and building a shed for the troops. One day, a man accused of stealing was shot to death right in front of him. "That was the scariest day," he says.

Having his sister nearby made life bearable. "She was my only source of happiness. She reminded me of home. There is a big difference between life now and life in the bush. I sleep better now, on a mattress and not on the ground like before. I also eat well. In the bush, we were lucky if we ate once a day." Musa only thinks of one thing now: the day he can go back to school. "I want to be honorable," he says. 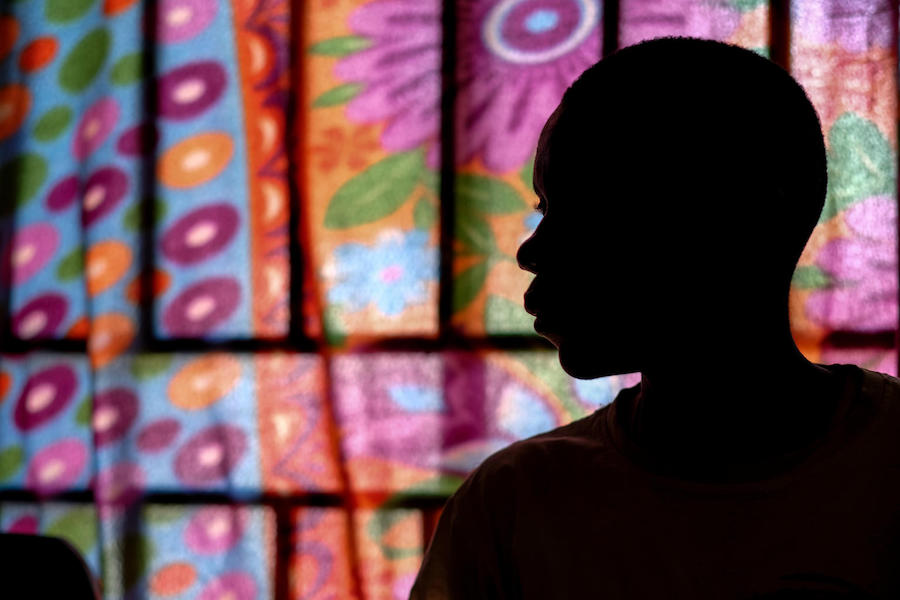 Seventeen-year-old David*  is hoping to be reunited with his mother in Yambio. David was abducted by men carrying guns on his way home from school in 2015. They were from a rebel group he had never heard of. They took him to the bush, where he says thousands of fighters were living. For the next three years, David was trained to shoot a machine gun, to fight, even to kill. If you are carrying a gun in a war, of course you hurt people with it," he says, with not much expression on his face. But he lights up when he talks about his future. "I want to go to school and learn to be a driver," he says. "I love cars." 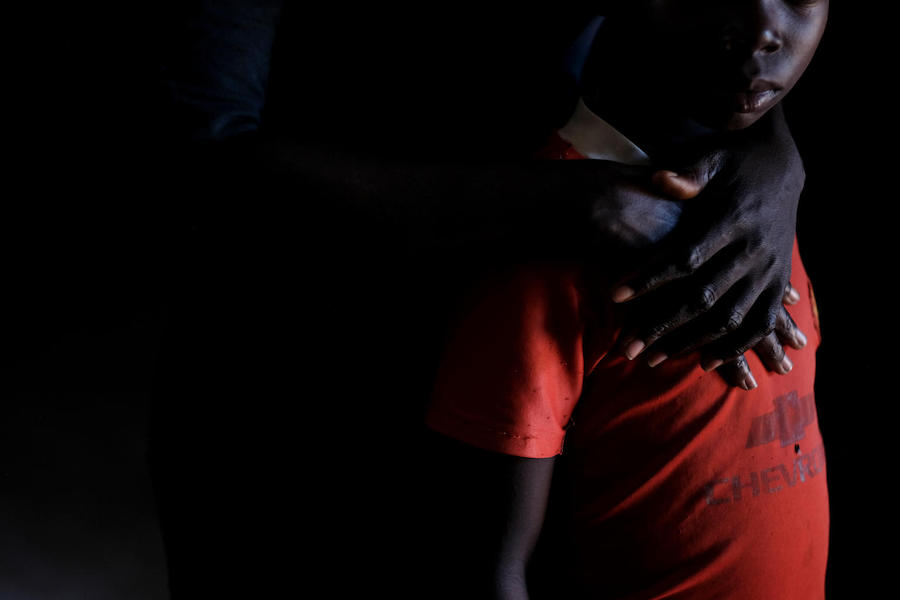 Thirteen-year-old Abel* is the youngest boy at the UNICEF-supported Tindoka Childcare Center.  "I have four brothers and five sisters," he says, speaking in a low, hesitant voice. His entire family was captured by armed gunmen when he was 9. When they tried to escape, he was the only one who didn't manage to run fast enough to get away. "I was very scared," he says. The men around him were violent and kept beating each other up. They attacked villages and stole property. "I never carried a gun, but I saw things," says Abel, his voice trailing off.

His social worker, Christine Sungerukuari, says, "Abel is the youngest but he is also very confident, very smart. The children at the center all respect him. He has authority, despite his young age. I think he can do whatever he sets his mind to. But we need to make sure these children get an education." Abel has big dreams for his future, and for his hometown: "I want to be governor of Yambio. I want to help poor people, and I want to make myself an example to make sure no child ever has to be recruited or to see violence." 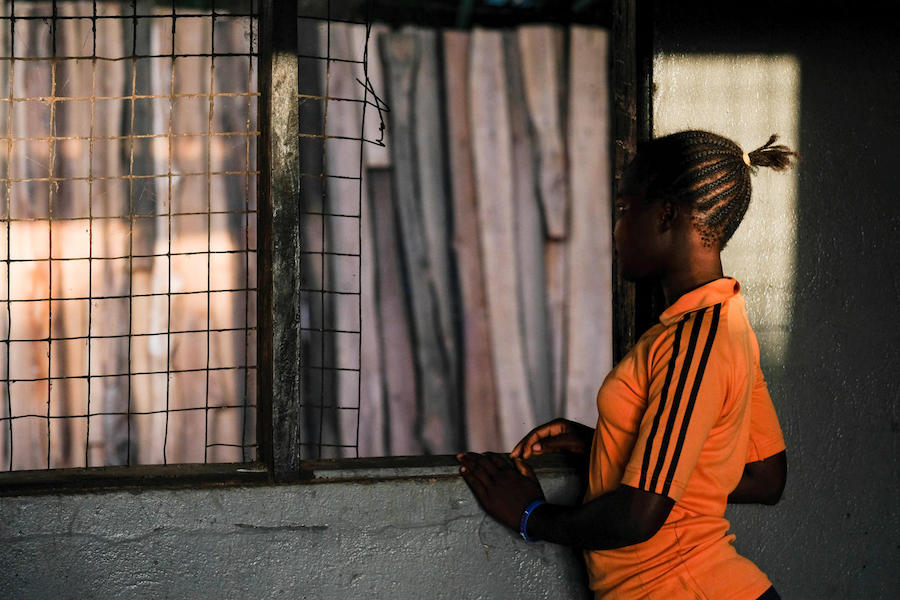 Marie*, 16, and her younger brother, who was only 8 at the time, were abducted by gunmen while they were fetching water. For three years, they lived in the bush with the armed group. Her brother was taken to the home of one of the soldiers to do chores, and Marie was trained in the use of small handguns. Soon she joined units as they ambushed villages, looted and killed.

She remembers the first man she shot and killed. But the memory that haunts her most was the family the fighters caught one day: a father, mother and children. "They forced the mother to kill her own children, then the father to kill the mother. Then they told me to shoot the father and I did," she says, weeping. "One day I will become president," she says forcefully, wiping away her tears. "I want to make a law that forbids people from forcing children into war." 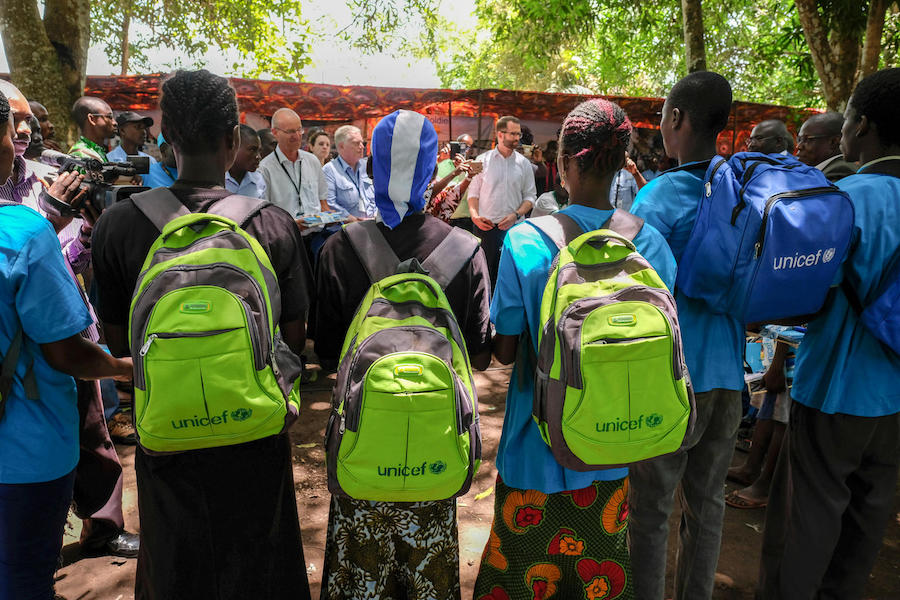 Children released from armed groups receive a "reintegration pack" filled with supplies from UNICEF to support their transition back into the community: civilian clothes, sandals, a blanket, bedding, a mosquito net, toiletries, cutlery, soap and a bucket. Girls also receive a hygiene kit containing a flashlight, laundry soap and reusable sanitary pads.

The children who have been released are starting their lives over again, with the help of UNICEF and partners. Despite this progress, an estimated 19,000 children are still serving in the ranks of armed forces and groups in South Sudan. So long as the recruitment and use of children by armed groups continue, these groups fail on their commitment to uphold the rights of children under international law.

UNICEF urges all parties to the conflict to end the recruitment of children and to release all children in their ranks.

*All names have been changed

Photo at top: Best friends Ganiko,* 12, and Jackson,* 13, stand together on April 17, 2018 in Western Equatoria State, South Sudan during a ceremony to release children from the ranks of armed groups and start a process of reintegration. All photographs by Sebastian Rich for UNICEF.