A resurgence of brutal violence has devastated CAR. Children and families are in urgent need of protection and humanitarian aid.

In December 2012, armed groups began a campaign of sectarian violence in Bangui, the capital of the Central African Republic (CAR). The looting, raping and killing briefly made international headlines, amid speculation of a failed state and possible genocide. But then the story sank from view.

A brutal bloodbath in 2013, and now a resurgence

Now the few early signs of recovery and rebuilding in CAR have given way to a dramatic resurgence in fighting that has enveloped parts of the country previously spared from the violence. Today, life is even more perilous for children than it was at the peak of the crisis: 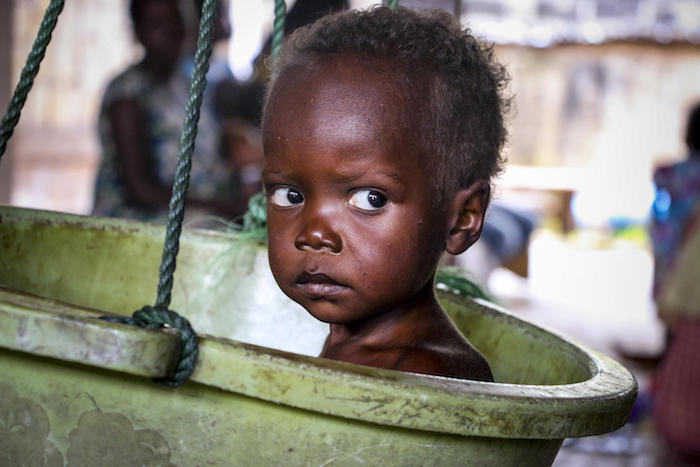 After being admitted for severe acute malnutrition, 3-year-old Pierre is weighed at the Centre de Santé Saint Joseph, a health center on the outskirts of Bangui, Central African Republic, in June 2018. © UNICEF/UN0248770/Le Du

Terrified families are being driven from their homes. Conditions for children are desperate.

"This crisis is taking place in one of the poorest and least developed countries in the world, and one of the most dangerous for humanitarian workers," said Christine Muhigana, UNICEF's Representative in the Central African Republic. "Conditions for children are desperate."

The crisis in CAR is driven largely by fighting between a dozen or so armed groups over cattle routes and lands rich in diamonds, gold and uranium. More often than not, the armed groups target civilians, not one another. They attack health and education facilities and personnel, mosques and churches, as well as sites where displaced people have taken shelter.

Terrified families are being driven from their homes. As of late September, nearly 643,000 people — at least half of them children — were displaced across CAR, and more than 573,000 had sought refuge in neighboring countries. 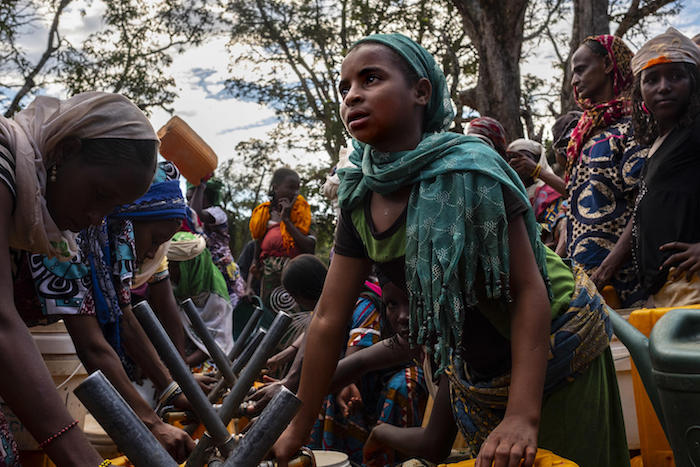 Internally displaced people collect water from a UNICEF-provided bladder at Elevage camp in Bambari, Central African Republic in September 2018. Around 20,000 people, mostly Muslim members of the Fulani ethnic group, live in the camp. Bambari, with a population of 54,000 people and 40,000 internally displaced people, is CAR's second largest city. Since the crisis began, the city has experienced waves of violence. Today, it is split along religious lines. There is no electricity or running water in the city. © UNICEF/UN0239552/Gilbertson VII Photo

CAR ranks 188 out of 189 countries for life expectancy, income and education

There is only one pediatric hospital in CAR. The nation has the world's second highest newborn death rate and maternal mortality ratio. Fewer than three out of five children complete primary school, and almost half the population lacks safe drinking water. The country ranks 188 out of 189 countries (ahead of Niger) on the United Nations Human Development Index, a composite indicator measuring life expectancy, income and education.

UNICEF is working to reach children in desperate need in CAR, even as aid workers themselves are being targetted. The number of attacks against aid workers has more than quadrupled from 67 incidents in 2017 to 294 in just the first eight and a half months of 2018. UNICEF's work includes:

UNICEF provides virtually all the RUTF required to treat SAM and almost all the emergency education supplies in CAR. UNICEF also supplies half of the vaccines required in the country, and procures the other half on behalf of partners and the government.

Despite the major upsurge in fighting and displacement, only 44 percent of UNICEF's US$56.5 million funding appeal for 2018 had been met by the end of October. "The children of the Central African Republic have been abandoned for too long," said Muhigana. "They need attention and help now, and they will need it for the long run."

UNICEF and partners are working tirelessly in the Central African Republic, Syria, Yemen, South Sudan, Bangladesh and around the world to save and protect children. With a presence in 190 countries and territories, UNICEF has helped save more children's lives than any other humanitarian organization in the world.

Top photo: Wearing a mix of modern and traditional costumes, young men and children painted with dried cassava powder walk to a government education ceremony in Bambari, Central African Republic in September 2018. Bambari is the second largest city in the country; vast areas of the country are largely out of government control. Many schools are closed, some with lessons dating back to 2014 still on the blackboard.  © UNICEF/UN0239489/Gilbertson VII Photo