A series of water improvement projects restores health and hope to children and families who have long suffered the effects of a protracted war.

This article is an adaptation of a previous article by UNICEF Yemen.

Faisal Hammoud Hassan Al-Jabri, 42, says life in Ibb, his family's adopted home since fleeing conflict in Saada governorate, was "filled with diseases, poverty and filth" due to the lack of safe water. Unable to keep themselves or their clothes clean, his eight children even stopped attending school, he recalls. “We had to travel to remote locations to search for [or buy] the water we needed just to get by."

Then UNICEF installed water pumps at the community wells, and access was restored.

"Joy has returned to my children’s faces," Al-Jabri says. "They get to be children again, rather than having to spend the day in search of water and clinging to life.”

Water, sanitation and hygiene interventions have been a major focus of UNICEF's response in Yemen since conflict erupted in March 2015. The country remains the worst humanitarian crisis in the world, with 20.7 million people – 71 percent of the total population – in need of humanitarian assistance. The conflict has left three million people, including 1.58 million children, internally displaced.

As part of its WASH response, UNICEF supplied and installed five water pumps for five wells in some of the country’s most under-resourced areas, including Al Sahool, Al Mashannah, and Al Dhihar areas in Ibb governorate, and rehabilitated 12 wells in Al Mashannah, Al Dhihar and Jiblah.

"This project has eliminated the diseases and epidemics that were rampant due to water scarcity and contamination," says Ahmad Al-Darwish, technical director of the local water and sanitation corporation, UNICEF's implementing partner in the project. "In a word, it has brought life back to the city, its residents and farmlands." 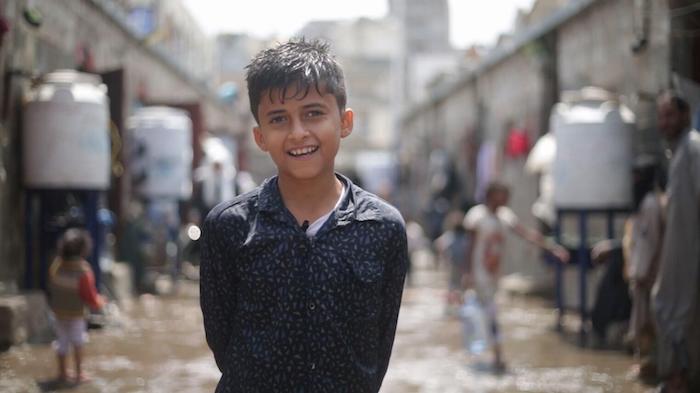 Aiz Al-Din, 11, is one of nearly 1.6 million children in Yemen who have been displaced by the ongoing conflict. He says he has been able to move forward from his feelings of estrangement and displacement now that his needs for safe water are being met. “I’ve learned that water is the most precious thing in life, and I have started to love staying in the camp now that I can access it,” he says. © UNICEF/UN0472889/Gabreez

Jamala Ali Fares, 38, fled the city of Taizz with her seven children, landing at the Al-Salam camp in Ibb, where contaminated water made all of her children sick.

“The camp’s children and adults were stricken by bacteria, amoebas and diarrhea from the unclean liquid we were forced to drink," Fares recalls. "Fortunately, once we gained access to potable water, the diseases disappeared, children returned to school, and we now have water that we can drink and use to clean. I think the simple reason we’ve been spared from the COVID-19 pandemic is that we have water we can use to wash our hands and clean our houses.”

Learn more about how a lack of safe water caused by conflict is far more dangerous for children living in war zones than the conflict itself.

Help UNICEF save and protect vulnerable children in Yemen.

Top photo: At a camp for displaced families in Al-Dhihar district, Ibb, Yemen, children celebrate UNICEF's successful rehabilitation of a nearby water pump. “Before we had water, we could rarely take a bath," says Karim, 8. "I am so happy now. Water is the most beautiful thing in life, and I play in it and enjoy it every day.” © UNICEF/UN0462456/Gabreez