Crisis in Ethiopia: UNICEF Pushes to Get Aid to Children in Tigray | UNICEF USA

Crisis in Ethiopia: UNICEF Pushes to Get Aid to Children in Tigray

UNICEF has been able to get some emergency supplies into Ethiopia's Tigray region, where violent conflict erupted on Nov. 4 and chaos still reigns. But it's nowhere near the scale of what's urgently needed.

Twelve weeks since conflict erupted in Ethiopia's Tigray region, UNICEF is still having trouble reaching vulnerable children amid mounting risks to their health, safety and well-being.

Reports of widespread food insecurity — and refugees arriving at camps in eastern Sudan "emaciated" — are fueling fears that hundreds of thousands of Tigrayans could starve. The region, located in the northern part of the country, was already suffering food shortages before war broke out on Nov. 4, and since then many farmers' crops have been burned, decimating much of the year's harvest.

Thousands of people have been killed. Close to 60,000 have fled to Sudan's Kassala and Gedarif states, including 300 unaccompanied or separated children, according to UNICEF. The refugees are staying in camps, where UNICEF and partners are providing humanitarian aid, including nutrition, safe water, health care and other emergency supplies. A mother and her child, refugees from the Tigray region of Ethiopia, receive support in the UNICEF breastfeeding room at the Hamdayet Reception Center in Gedarif, Sudan. © UNICEF/UN0403207/Abdalkarim

Hundreds of thousands more Ethiopians have been internally displaced inside Tigray, where access to aid remains limited amid continued violence and chaos. The potential for gender-based violence and exploitation of children is high. Critical infrastructure has been damaged or destroyed — including health facilities — and essential supplies looted. Vaccinations have ground to a halt. Continued violence and instability threatens to further erode health services and weaken defenses against the spread of COVID-19.

“Our concern is that what we don’t know could be even more disturbing,” UNICEF Executive Director Henrietta Fore said in a Jan. 27 statement. “For 12 weeks, the international humanitarian community has had very limited access to conflict-affected populations across most of Tigray. The small but crucial opening that enabled UNICEF and partners to dispatch 29 trucks filled with emergency nutrition, health, and child protection supplies was a step in the right direction, but nowhere near the level of access and scale of support that is actually needed." 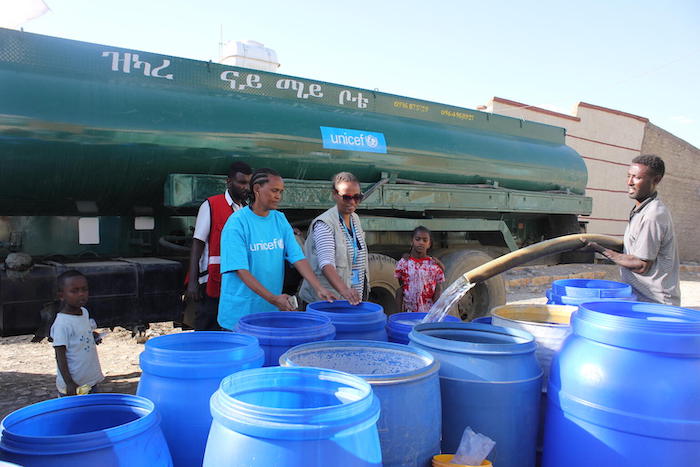 According to the most recent situation report, for example, UNICEF was able to deliver nearly 8,000 cartons of Ready-to-Use-Therapeutic Food (RUTF) inside Tigray, enough to meet 8,000 children’s nutrition needs for three months. UNICEF's response plan aims to reach over 2.8 million of the most vulnerable people — including some 1.3 million children — in Ethiopia's worst affected areas of Tigray and neighboring Amhara with a range of services and support.

Children in most of Ethiopia have returned to school following COVID-19 restrictions, Fore also noted – but not the 1.3 million school-aged children in Tigray.

"All parties to the conflict have a fundamental obligation to enable rapid, unimpeded and sustained access to civilians in need of assistance," Fore said. "Every additional day of waiting for help will only worsen children’s suffering." 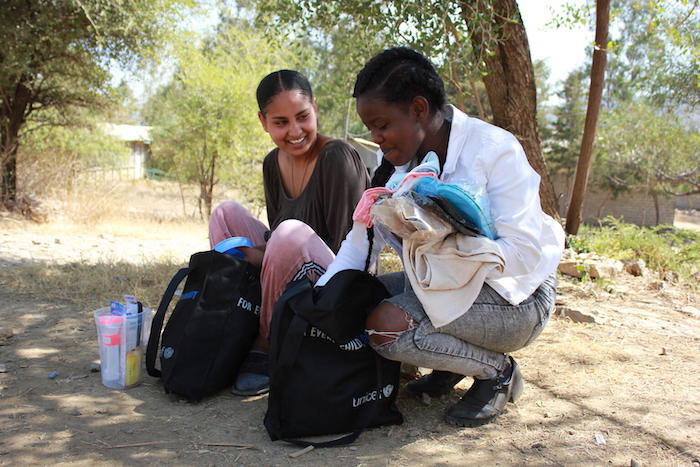 Over 2,000 women and girls inside Tigray have already received emergency dignity kits from UNICEF containing personal hygiene supplies and other items. Thousands more kits are on the way in addition to other services and support as part of the ongoing UNICEF response in the region. Above, 18-year-old Feven, left, and 20-year-old Senait, both from Tigray, both recently uprooted by violence and staying in the town of Mekelle, received their kits on Jan. 15, 2021. © UNICEF/UN0405807/Leul Kinfu

UNICEF responds to hundreds of humanitarian emergencies every year. Help UNICEF deliver lifesaving assistance to children and families caught in conflict. Your contribution can help sustain these efforts.

Top photo: A boy photographed at a refugee camp in eastern Sudan is one of over 25,000 children who have fled Ethiopia's Tigray region to escape violence since early November. © UNICEF/UN0403168/Abdalkarim