People have been crossing the border since Nov. 7, rapidly overwhelming the response capacity on the ground. By the end of the month, nearly 42,000 refugees had registered at entry points in Kassala and Gedaref states — more than 20 percent of them children. The number is expected to more than double in a matter of months. 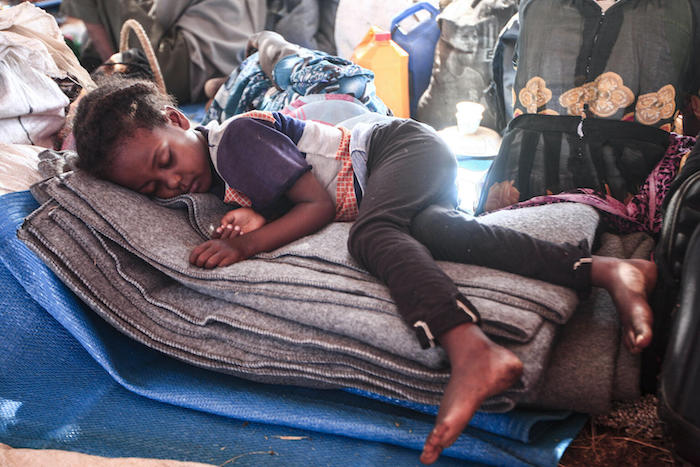 An Ethiopian refugee child who fled fighting in Tigray province sleeps in a hut at the Um Raquba camp in Sudan's eastern Gedaref province. Nearly 42,000 refugees have arrived in Sudan since fighting began. UNICEF and partners are bracing for that number to more than double within six months. © UNICEF/UN0371489/Hamid/AFP

UNICEF and its partners are supporting the Government of Sudan’s response by providing water, sanitation and hygiene (WASH) services, health and nutrition services and psychosocial support.

Needs are expected to increase as fighting intensifies. As of mid-December, humanitarian workers were still unable to deliver aid to those still inside Tigray — home to roughly 180,000 Eritrean refugees, 200,000 Ethiopians who are internally displaced and another 600,000 people who are dependent on food aid.

"We are extremely concerned that the longer access to them is delayed, the worse their situation will become" as supplies of food, medicines, water, fuel and other essentials run low, UNICEF Executive Director Henrietta Fore said. "We have already provided some supplies to a number of partners in Tigray, but this is not enough. We need to be able to provide support at scale in Tigray and to have full access to determine the scale of children’s needs. We call for urgent, sustained, unconditional and impartial humanitarian access to all families in need, wherever they are. " 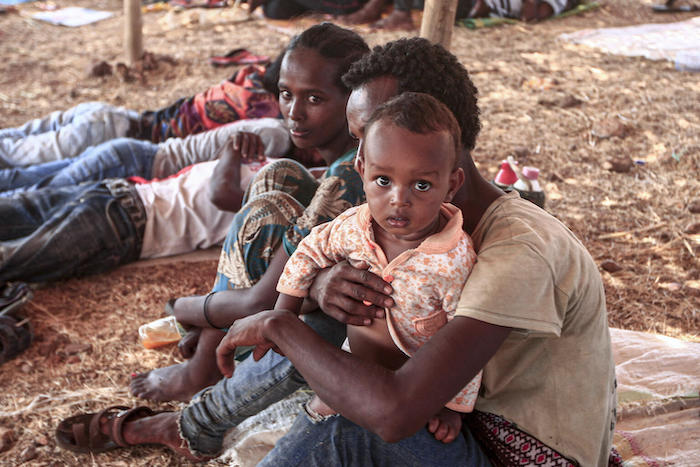 Refugees from Ethiopia's embattled Tigray region find shelter at the Um Raquba camp in Sudan's eastern Gedaref province, where UNICEF is providing safe water and sanitation, health and nutrition services and other support as part of a multi-agency emergency response. © UNICEF/UN0371488/Hamid/AFP

In Sudan, UNICEF has already installed 14 large water tanks and dozens of latrines while also providing jerry cans, soap and chlorine, among other essential supplies. In Hamdayet, a main entry point, UNICEF has set up a child protection center where children can access a range of social services. Health teams are immunizing kids for polio and measles, and nutrition teams are screening for malnutrition and admitting those with severe or acute cases for treatment.

To protect refugees from the potential spread of COVID-19, UNICEF is also organizing a communications campaign with 200 promoters to raise awareness of the need for social distancing and other preventative measures.

"Our serious concern is that what happens here will have repercussions not only for Sudan or Ethiopia but for the entire region," Abdullah Fadil, UNICEF Representative in Sudan said during a recent briefing.

Help UNICEF continue to deliver lifesaving services and support to vulnerable children caught in humanitarian crises around the world.

Top photo: A young girl caught in the crossfire during fighting in Ethiopia's Tigray region recovers from her injuries at her home in Humera. © UNICEF/UN0371491/Soteras/AFP