Breastfeeding a Lifeline for Mothers and Babies in Ukraine

With help from UNICEF, Yevheniya has learned how to keep her baby healthy even amid violence and displacement.

Every time 6-month-old Yehor is breastfed, he uses his tiny fingers to clasp his mother Yevheniya's hand. Then he smiles up at her.

"In my view, breast milk is not only about food for a baby, it's about communication between mom and baby," says 29-year-old Yevheniya.

During wartime, breast milk ... makes me confident that I always have something to feed my child.

Since the outbreak of war in Ukraine, breastfeeding has become an important ritual for Yevheniya’s family. Mother's milk is the key to survival and safety for baby Yehor, who in his short life has already experienced conflict and displacement.

"During wartime, breast milk is something that makes me confident that I always have something to feed my child,” says Yevheniya. Breastfeeding baby Yehor has been a boon to both mother and baby. "While holding him in my hands during shelling, I was always scared and thought just about what could happen to him," says Yehor's mother, Yevheniya. "The only thought that made me rejoice was that I at least have an opportunity to feed him.”  © UNICEF/UN0679249/Filippov

Yevheniya gave birth to Yehor in February. She and her husband had spent the previous few months furnishing a house in Mariupol, eastern Ukraine. They bought baby clothes, and picked out a stroller and playpen.

When the first explosions occurred in Mariupol on Feb. 24, their plans changed in an instant. Yevheniya quickly packed two bags — one for the family and another for the baby.

"We realized it was dangerous to stay in the Donetsk region and that we should leave as soon as possible,” recalls Yevheniya. “The trunk in our car is very small, so we could only take the most necessary stuff."

Just weeks after their son's birth, shelling began in Mariupol and the family was forced to flee

The family traveled seven hours by car to Dnipro, with no time for stops or rest. Yevheniya soon realized the importance of being able to breastfeed, providing her baby with food security and protection from disease even as their world fell apart.

"He was only one month old,” she says. “Only because of breastfeeding did our trip go smoothly. I can’t imagine what I would have done if I had needed to feed Yehor with infant formula. Because not only should I have had this formula with me, but also water at the appropriate temperature and the chance to sterilize bottles. It is very difficult to organize all this in the middle of a journey, especially during wartime.” 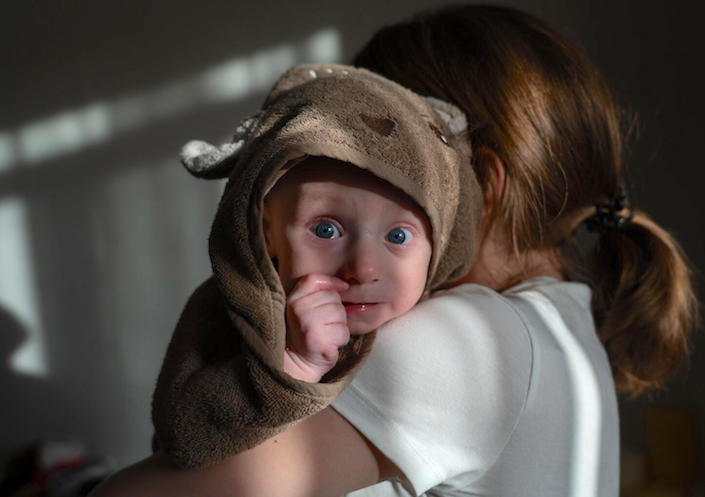 Yehor was a month old when the shelling began in Mariupol. His parents quickly packed two bags, one for themselves and one for him, and fled by car to Dnipro, seven hours away. © UNICEF/UN0679271/Filippov

During the first months of the war, the family lived with acquaintances, enduring countless air raid sirens and even shelling. Every time the siren wailed, Yevheniya wrapped her son in a blanket and ran to the basement. There, too, breastfeeding saved the young mother.

"While holding him in my hands during shelling, I was always scared and thought just about what could happen to him. The only thought that made me rejoice was that I at least have an opportunity to feed him.”

“I was following recommendations aimed to help in such cases, such as holding the baby next to my breast and keeping hydrated,” she says. “I was also trying to stabilize my emotional state.”

A steady diet of breast milk has helped 6-month-old Yehor thrive, despite the upheaval of war. "I realized that I had to pull myself together because all that my baby needed was an emotionally stable mom, attention and breast milk,” says Yevheniya. © UNICEF/UN0679271/Filippov

Since March 2022, UNICEF has been conducting an information campaign to support breastfeeding in Ukraine. More than 1 million mothers have already received information about proper preparation and adjustment to breastfeeding. In partnership with other organizations, UNICEF developed a video course to be distributed in all Ukrainian medical facilities providing care to pregnant women and women in labor.

During World Breastfeeding Week 2022, the UNICEF office in Ukraine is partnering with the NGO Molochni Ricki ("milky rivers") to present a series of lectures, consultations and classes for Spilno community social service centers in Irpin, Lviv and Cherkasy.

Reading UNICEF's educational materials about breastfeeding helped Yevheniya realize that when she worried about her loved ones back home, she stopped eating and drinking.

"I realized that I had to pull myself together because all that my baby needed was an emotionally stable mom, attention and breast milk,” she says.

My biggest joy today is my son. When he smiles, when I see how he's growing up, I forget about everything, even about the war.

The family now lives in an apartment in Kyiv that still bears the scars of a missile attack. Yevheniya often wakes up in the middle of the night — not only because of Yehor’s crying, but because of air raid sirens. She hopes for a better future for her son and is determined to provide him with safety, comfort and healthy food.

"My biggest joy today is my son,” she says, happily. “When he smiles, when I see how he's growing up, I forget about everything, even about the war.”

No matter what the future holds, Yehor's mother is determined to provide him with safety, comfort and nutritious food.  © UNICEF/UN0679271/Filippov

UNICEF and the World Health Organization are calling on governments to allocate increased resources to protect, promote and support breastfeeding policies and programs, especially for the most vulnerable living in emergency settings.

Humanitarian needs in Ukraine are multiplying as the violence continues. UNICEF is working to protect, promote and support the feeding and care of infants and young children, as well as their caregivers. Your contribution can make a difference. Please donate.

Join UNICEF in supporting children and mothers globally. Urge your Members of Congress to support the bipartisan Reach Every Mother and Child Act.

Top photo: Baby Yehor was still a newborn when the shelling began in Mariupol, Ukraine. He and his parents were forced to evacuate. “Only because of breastfeeding did our trip go smoothly," says his mother, Yevheniya. "I can’t imagine what I would have done if I had needed to feed Yehor with infant formula." All photos by Aleksey Filippov for UNICEF.