Presenting the ten best photos of the year: powerful images that reflect the urgent needs of children — and the impact of UNICEF's efforts to save and protect the most vulnerable. 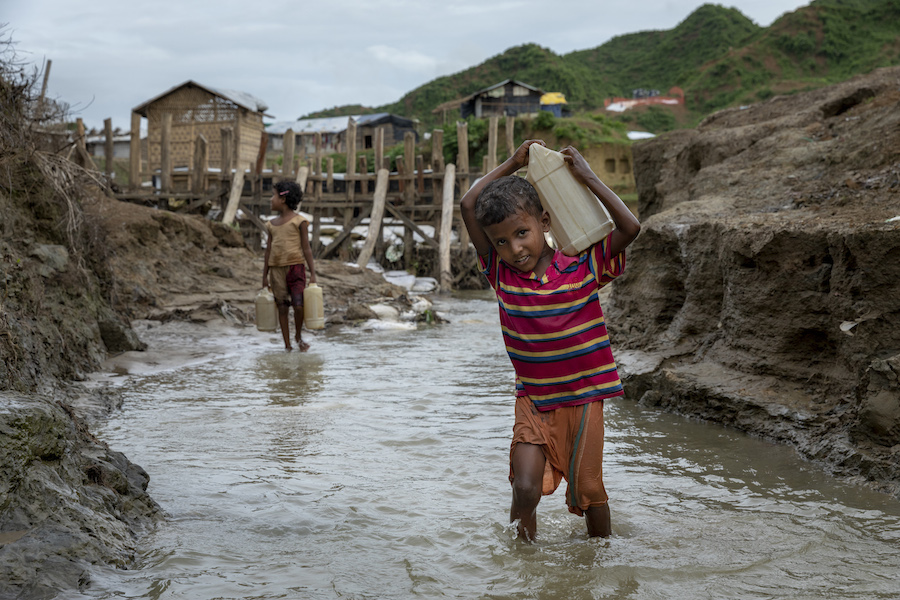 Bibi, 10, fetches water twice a day for his family in Cox's Bazar, Bangladesh, where UNICEF and partners are working to improve access to clean, safe drinking water for Rohingya refugees living in the camps and for members of the surrounding host communities. In the second half of 2018, those efforts reached close to 370,000 people. ©UNICEF/UN0226388/Brown 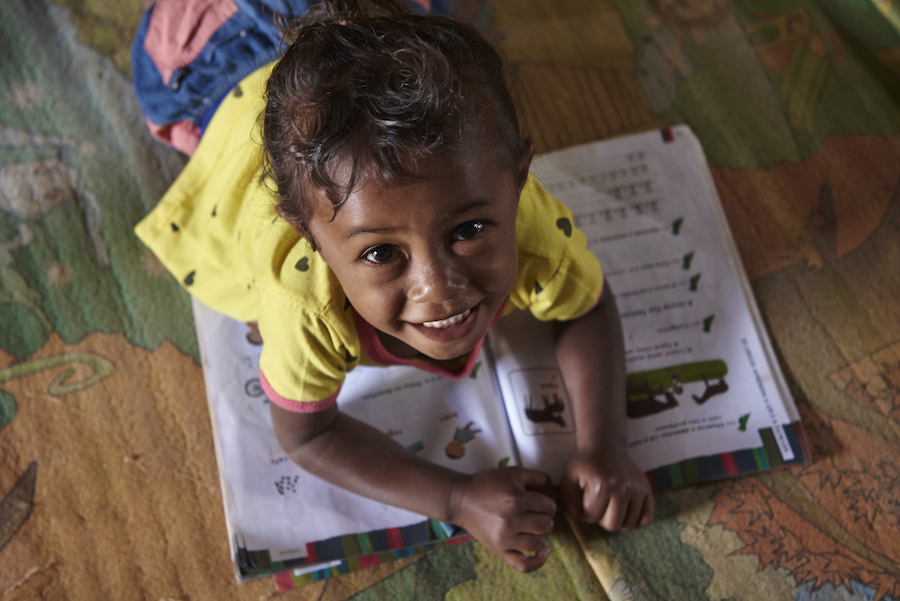 To date, UNICEF and partners have opened more than 1,400 learning centers in the Rohingya refugee camps in Bangladesh — with 700 more on track for completion by mid-2019 — in an effort to provide all children who are living in the camps with the opportunity to continue their education. UNICEF's education programs are as much of a priority as providing health care, nutrition and clean water —they are just as essential to a child's development and future well-being, and a matter of particular urgency for children uprooted by conflict. ©UNICEF/UN0252624/Noorani 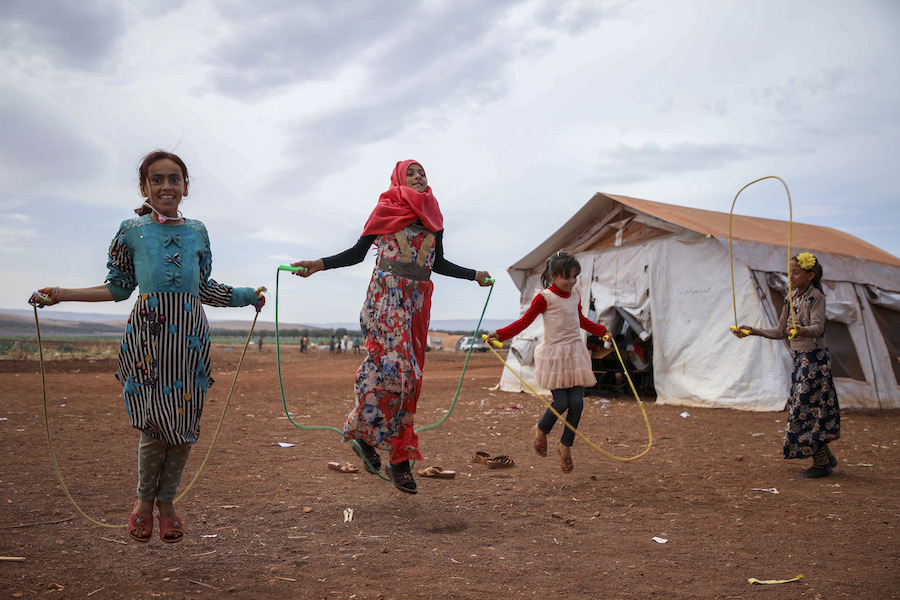 Girls take a break from their studies in rural Idlib, in northern Syria, outside a tent school in the Junaina camp, where 350 children between the ages of 7 and 14 were able to get back to learning in 2018 with UNICEF support. Idlib is home to nearly 1 million children, many of whom arrived having fled violence elsewhere in the country. It is difficult for humanitarian organizations to reach Idlib, but UNICEF has been able to deliver supplies with help from a partner on the ground. As of October this year, UNICEF, through partners, has supported the enrollment of 3 million children in formal education inside Syria and in Syria refugee host countries, helping another 353,000 get back to learning in informal settings. After seven years of civil war, some 2 million Syrian children remain out of school. ©UNICEF/UN0248440/Watad 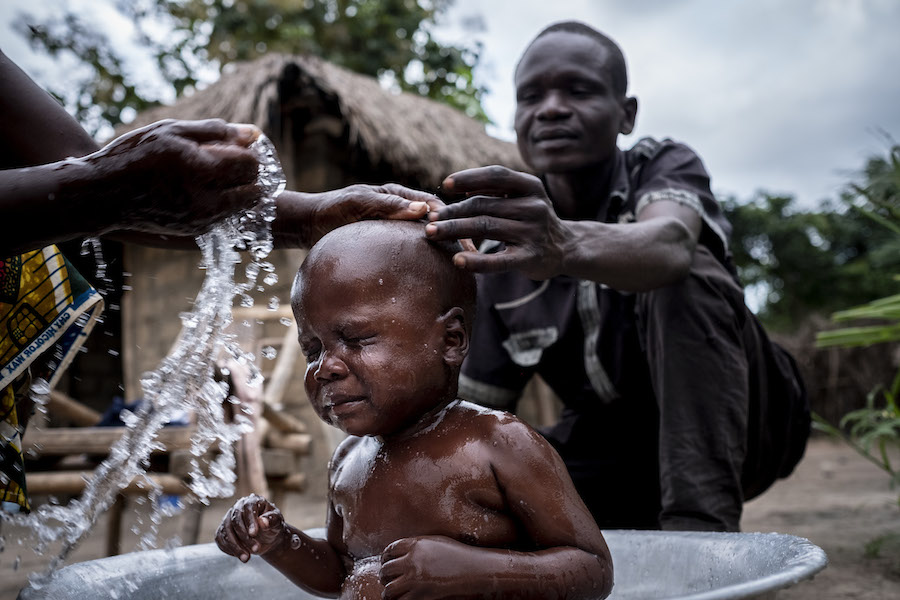 Pierre, 3, gets a bath outside his home in Bambu 2 Village, on the outskirts of Bangui in Central African Republic. Years of sectarian violence in CAR have left children and families in crisis. About six weeks before this photo was taken, Pierre had been suffering from his second case of severe acute malnutrition (SAM). His father brought him to the UNICEF-supported pediatric hospital in Bangui, where he was given fortified therapeutic milk until he was strong enough to move on to the next phase of treatment: a regimen of Ready-to-Use Therapeutic Food (RUTF), a nutritious peanut paste, which led to his full recovery. UNICEF is working to provide RUTF, medicine, equipment and training to treat tens of thousands of children with SAM, and working with partners to reach 890,000 women and children in the country to prevent malnutrition. ©UNICEF/UN0239555/Gilbertson VII Photo 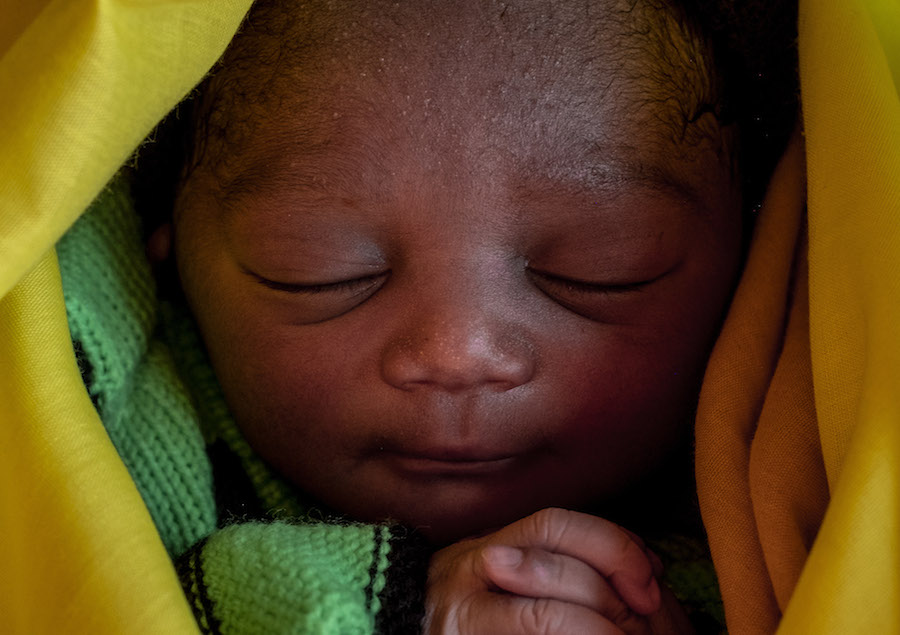 A midwife helped Yvette, 25, deliver this healthy newborn safely in Bambari, Central African Republic (CAR) on Sept. 5, 2018. Infant mortality rates in CAR are the second highest in the world (ahead of Niger) due to multiple crises in the country that have left cities like Bambari deprived of electricity, running water and other basic resources. UNICEF's ongoing humanitarian response includes providing vulnerable communities with tents, anti-malarial bednets, safe drinking water, sanitation services and other support. ©UNICEF/UN0239527/Gilbertson VII Photo 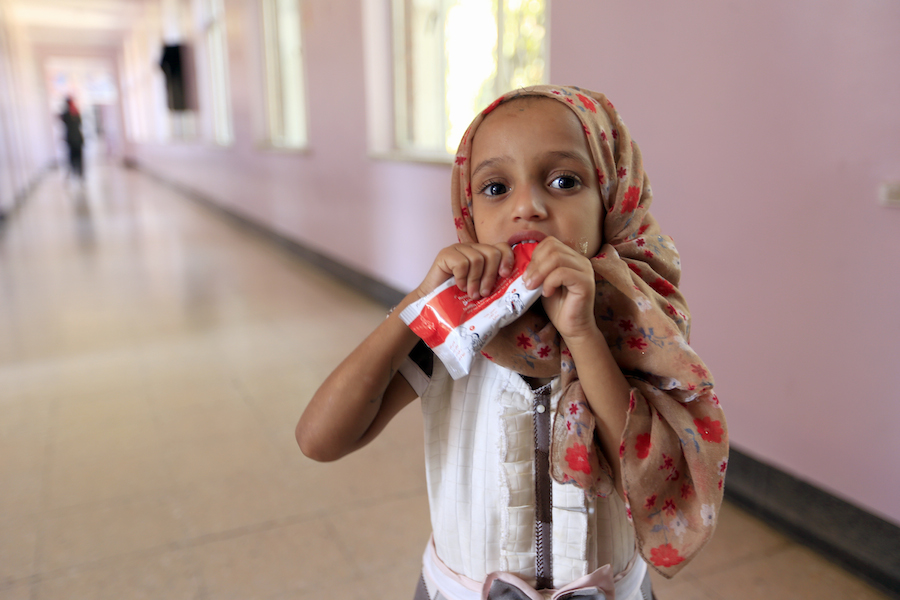 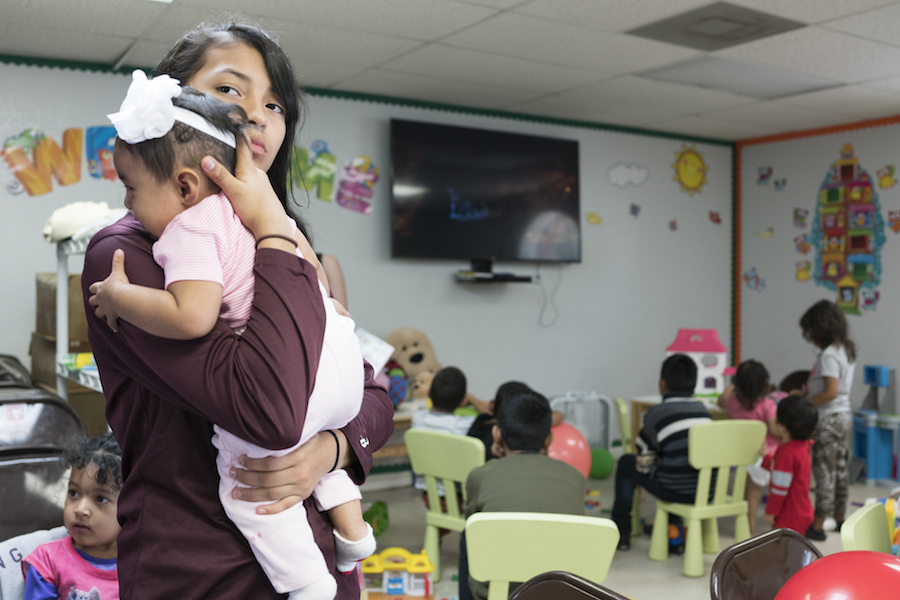 Children play at a support center in McAllen, Texas, where newly arrived migrant families from Central America can come to receive services. UNICEF works with partners to help keep families together and reunite children who become separated from their parents. "Migration is one of the defining issues of our era," writes Caryl M. Stern, UNICEF USA President and CEO. "UNICEF is working around the world to protect migrant children and families at every step of the way —addressing root causes in their home countries, offering essential services along migration routes and providing support in their countries of destination. No matter where they are, or where they are from, all children have a right to health, safety and education." ©UNICEF/UN0220948/Bindra 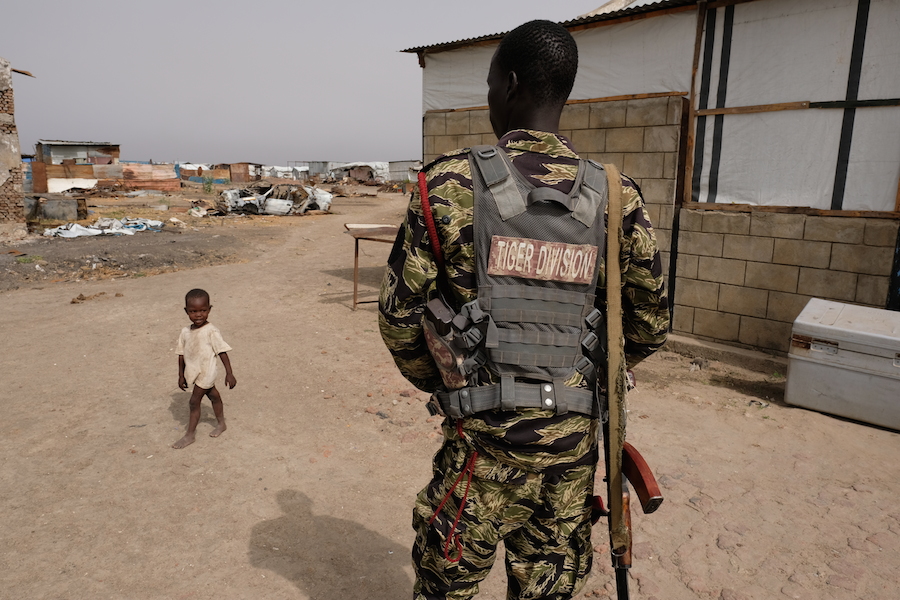 A child passes a soldier standing in the street of a South Sudanese village that has been reduced to rubble as a result of years of violent civil war. UNICEF and partners use helicopters to send humanitarian response teams and supplies to isolated communities that are either inaccessible by road or cut off due to fighting. More than 170 of these missions have been conducted since 2014, reaching more than 3 million people. ©UNICEF/UN0236842/Rich 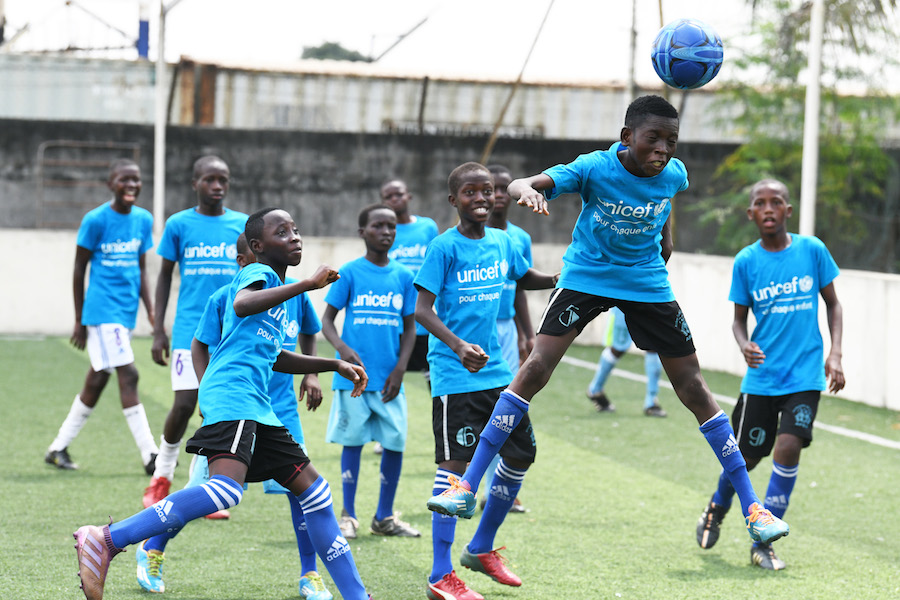 To commemorate this year's World Children's Day — Nov. 20 — school kids in Abidjan, Côte d'Ivoire, go head to head on the soccer field, wearing blue to represent UNICEF's universal call to action: to celebrate, defend and promote the rights of children everywhere. Making sure children know their rights, as well as working to ensure these rights are being upheld, factors into everything UNICEF does, including efforts to end child marriage, child labor, child trafficking and the forced recruitment of child soldiers. It is the driving force behind UNICEF's efforts to get children back to school, and to keep them there and on track to a better future. ©UNICEF/UN0257627/Dejongh

With a presence in 190 countries, UNICEF has helped save more children's lives than any other humanitarian organization in the world. Make a donation before January 1 for a 2018 tax benefit.