UNICEF reports on a war that has "shattered the lives of millions of children," and the impact of the emergency response inside Ukraine and in refugee-hosting countries.

Friday, June 3, marks 100 days of war in Ukraine — a war that has devastated children on a scale and at a speed not seen since World War II. 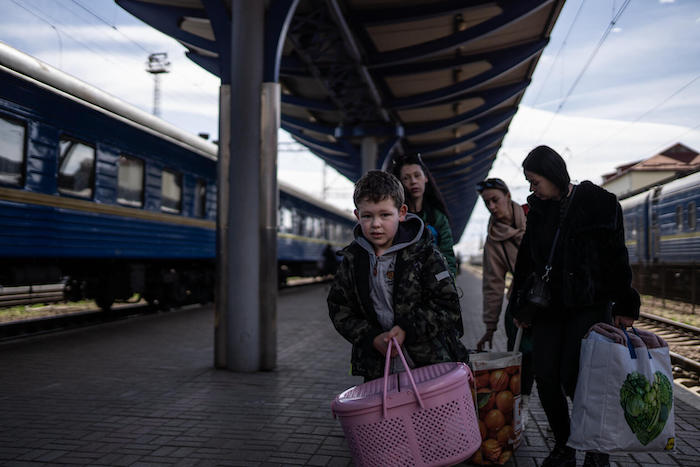 On April 8, 2022, displaced families from Odesa arrive at the railway station in Uzhhorod, Ukraine, a destination for people fleeing fighting throughout the country. © UNICEF/UN0644778/Haro

As of May 30, at least 262 children had been killed and 415 injured in attacks since Feb. 24, according to verified reports — more than two children killed and more than four injured each day, mostly in attacks using explosive weapons in populated areas.

Civilian infrastructure on which children depend continues to be damaged or destroyed. So far this includes at least 256 health facilities and one in six UNICEF-supported ‘Safe Schools’ in the country’s east. Hundreds of other schools across the country have also been damaged.

Conditions for children in eastern and southern Ukraine where fighting has intensified are increasingly desperate.

“June 1st is International Day for the Protection of Children in Ukraine and across the region,” UNICEF Executive Director Catherine Russell said. “Instead of celebrating the occasion, we are solemnly approaching … the 100th day of a war that has shattered the lives of millions of children.

“Without an urgent ceasefire and negotiated peace, children will continue to suffer – and fallout from the war will impact vulnerable children around the world.” 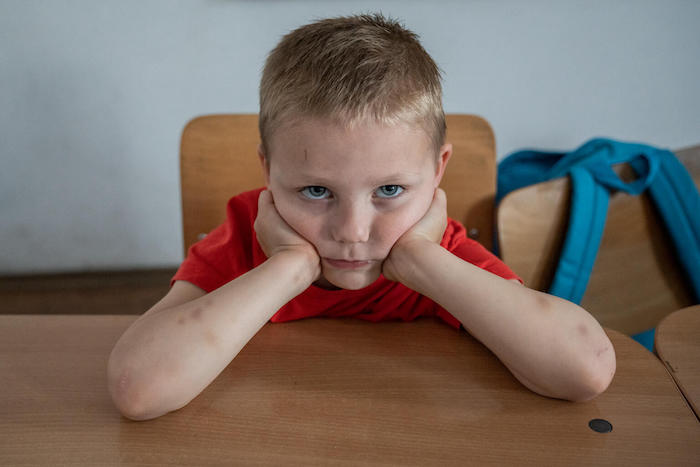 A young boy who is one of more than 230 Ukrainian refugee children who have been able to resume their schooling in Bucharest, Romania, where they have been welcomed with a lot of affection, and where UNICEF is supplying learning materials and other support to teachers and students. The children are studying mathematics and science and are learning how to read and write in Ukrainian and English. © UNICEF/UN0645390/Moldovan

UNICEF has been scaling up emergency operations since Day One to address what it describes as an acute child protection crisis. Children fleeing violence are at significant risk of family separation, violence, abuse, sexual exploitation and trafficking. Most have been exposed to deeply traumatic events and require safety, stability, child protection services and psychosocial support – especially those who are unaccompanied or have been separated from their families.

More than anything, they need peace.

At the same time, the war and mass displacement are devastating livelihoods and economic opportunities, leaving many families without sufficient income to meet basic needs and unable to provide adequate support for their children.

UNICEF continues to call for an immediate ceasefire in Ukraine and to protect all children from harm. This includes ending the use of explosive weapons in populated areas and attacks on civilian infrastructure. UNICEF is also appealing for full humanitarian access to safely and quickly reach children in need wherever they may be.

UNICEF and its partners are on the ground in Ukraine and neighboring countries, working to provide children and their families with humanitarian assistance, including child protection, water and sanitation, health, nutrition and education services. In Ukraine, UNICEF and partners have:

Almost 300,000 vulnerable families have registered to receive cash assistance through a program supported by UNICEF and the Ministry of Social Policy.

In refugee-hosting countries, UNICEF supports national, municipal and local systems that deliver essential services and protection, particularly for the most vulnerable children. This includes: 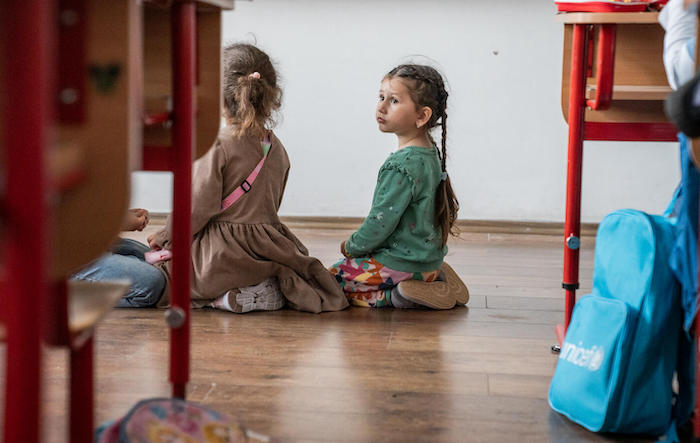 Two of the more than 230 young students, all refugees from Ukraine, who have resumed their schooling in Bucharest, assembling for three-hour daily classes hosted at National College Mihai Viteazul. © UNICEF/UN0645392/Moldovan

Twenty-five 'Blue Dot' centers — one-stop safe havens that provide support and services for families on the move — have been established along major transit routes in Moldova, Romania, Poland, Italy, Bulgaria and Slovakia.

UNICEF’s appeal for support for its humanitarian response inside Ukraine and in refugee-hosting countries is only partially funded. Support UNICEF’s work for the children of Ukraine. Donate today.

Eleven-year-old Yana, who lost two legs during a missile attack at Kramatorsk railway station, recovers at a hospital in Lviv, Ukraine, on May 12, 2022. Since Feb. 24, 1,577,000 children and adults have had access to medical service in UNICEF- and partner-supported hospitals. © UNICEF/UN0643725/Lviv Territorial Medical Union Hospital