Safe, Clean Water Is the Key to Life for Rohingya Refugees

Hundreds of thousands of terrified Rohingya refugees began flooding onto the beaches and paddy fields of southern Bangladesh in August 2017. Fleeing a Myanmar military crackdown that UN officials call "a textbook example of ethnic cleansing," the Rohingya have been subjected to a horrific campaign of brutal violence, including gang rapes and massacres. Now, seven months later, they are still arriving in Bangladesh at the rate of more than 1,000 a week, tired, traumatized and in need of safe, clean water.

"Without clean water, you can get waterborne diseases," says Jean-Jacques Simon, Regional Chief of Communication for UNICEF in South Asia. "Clean water is at the center of this humanitarian crisis."

The monsoon season threatens to bring floods and landslides, further jeopardizing the survival of refugees living in the overcrowded makeshift settlements. "Hundreds of thousands of children are already living in horrific conditions, and they will face an even greater risk of disease, flooding, landslides and further displacement," says Edouard Beigbeder, UNICEF Representative in Bangladesh. 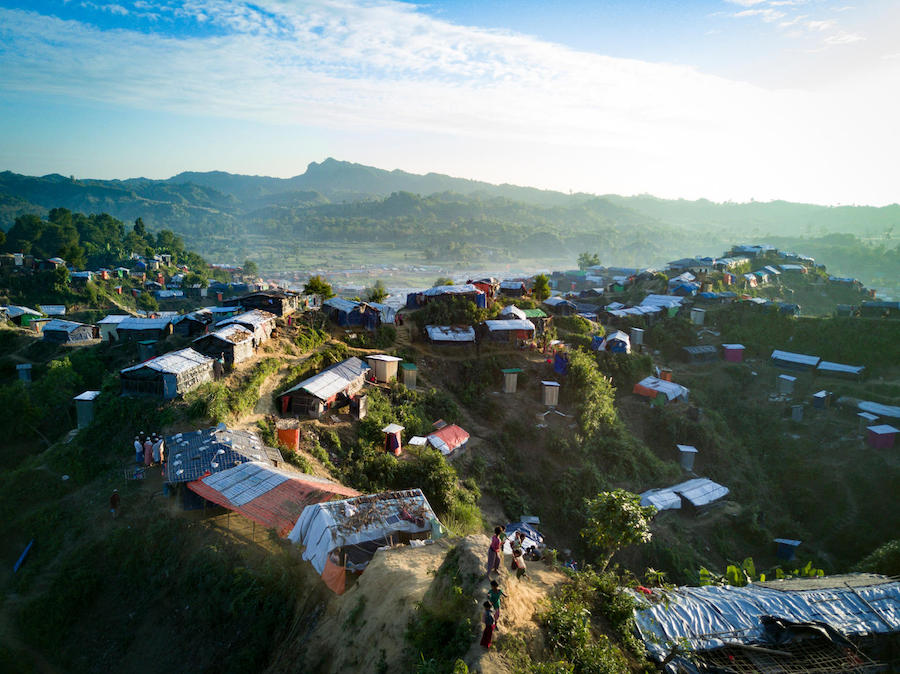 UNICEF and partners are on the ground preparing for storms and flooding, relocating people in the highest risk areas to safer spaces and prepositioning water storage tanks. Toilets are being elevated or moved to higher ground to prevent flooding that could contaminate drinking water and spread waterborne diseases. Community health workers are establishing oral rehydration service points with enough equipment and drugs to treat children in the event of a cholera outbreak. Water is being chlorinated and vaccination teams are spreading out to administer the oral cholera vaccine and to ensure that children under the age of 2 get their full range of immunizations.

Help UNICEF protect Rohingya refugees during the monsoon season. Your contribution can make a difference.

Photos from top: Rohingya refugees continue to arrive in Bangladesh at the rate of 1,000 or more a month. © UNICEF; Rohingya refugee children stand atop a narrow path hugging a steep slope at the Unchiprang makeshift settlement in Cox's Bazar District, Bangladesh, January 2018.  © UNICEF/UN0157358/Nybo