Going Where Help Is Needed Most

UNICEF Senior Emergency Coordinator AK Musse was a child refugee. Now he's devoted his career to helping people in crisis around the world.

Abdulkadir (AK) Musse, Senior Emergency Coordinator with the Humanitarian Field Support section of UNICEF's Office of Emergency Programs, recently returned from an emergency mission to Bangladesh, where he was supporting UNICEF's response to the Rohingya refugee crisis. A total of 910,000 people have fled the crisis in Myanmar to Bangladesh, including the estimated 745,000 Rohingya refugees who arrivied since August 2017. Almost 60 percent of the refugees are children.

AK has been with UNICEF in various roles since 2003. Based in New York, he travels regularly to conflict and natural disaster areas to provide technical support to UNICEF's emergency and humanitarian efforts on the ground. In 2016, he provided technical support to the European migration crisis in Macedonia and Serbia as well as support missions to protracted crises in South Sudan and Somalia. In 2015 he was responsible for coordinating the Nepali earthquake response. He also responded to the Ebola crisis in Sierra Leone, and has experience in Syria, Nigeria, Indonesia, Ethiopia, Ivory Coast and the United States.

What is it like for Rohingya children living in the sprawling refugee settlements that have sprung up in Bangladesh?

AK MUSSE: One thing that struck me was the resilience of the children here in the camps. You can see the first two, three weeks the children are very traumatized, but after a while their mental health improves. I spoke to a child who was 6, 7 years old and I asked him, "What do you want to be when you grow up?" First, he said, "I want to be a teacher." Then the next time, he said, "No, I want to be a doctor." This child was holding a small UNICEF notebook, and it was the first time he was really holding a pen, you know, a 6, 7-year-old child who had never been to school. The hope and expectation that they have, despite all the tragic events that they have gone through, is really very touching. They have hope, they have a future ahead of them. 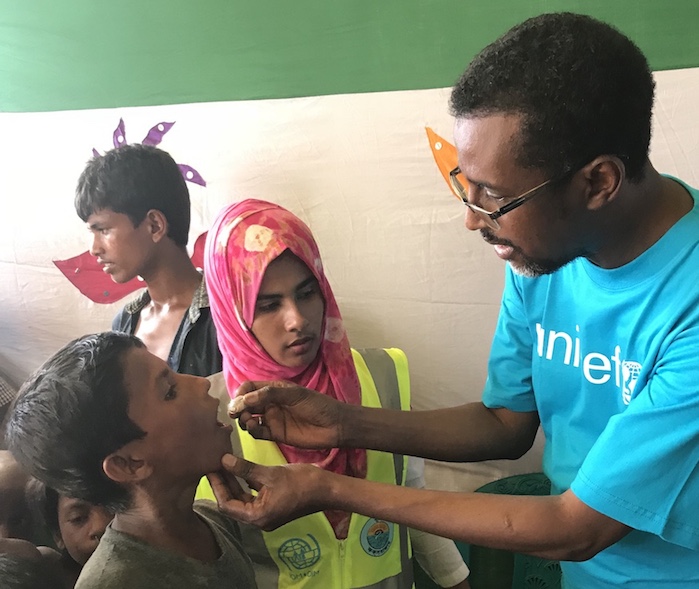 You crossed from Myanmar into Bangladesh with the Rohingya refugees. What was the journey like?

AK MUSSE: When refugees cross from Myanmar into Bangladesh, there's this no man's land, a buffer zone: muddy, wet rice fields. They stay there for a few nights until the government lets them in. So in this case, we have 4,000 refugees who started at the border, and some of the women were pregnant. There was this young girl, 15 or 14, but she claimed to be 16 or 17. She was heavily pregnant. She went into labor while we were there and she had to deliver. Thanks to God we were there. We used our jackets, everything, to give her privacy. We had to run back to get medical supplies and a blanket, then we helped the baby and the mother, cleaned them up and washed them using hand soap.

Then the mother, she kept crying. We were wondering if she had a pain, and we were thinking maybe we can talk to the commander and take her to the hospital. But she was crying of happiness, because she survived. The day before we crossed from the Myanmar side, she witnessed one of her relatives, a young woman, who died in front of her while giving birth. So she was expecting to die. But thank God, with our help, she survived and the baby, beautiful child, was born in no man's land.

What do the Rohingya refugees need most?

AK MUSSE: In Bangladesh, we found that almost all of the children crossing the border are either naked or semi-naked. They don't have a shirt or trousers, forget about shoes. No one in the camps has shoes. So we are giving them clothes and shoes. But now it's really getting cold, especially at night time, so we have a high number of upper respiratory infections recorded in our health facilities. So we thought, if we could give the children from 0 to 10 years old some clothes and shoes, and linkage to child protection and school facilities, that would be a start.

I'm Ethiopian, from East Ethiopia. It's a region that has been exposed to conflict ever since I was born. I was a refugee myself. I know what children need, when they're that young and exposed to displacement.

Where are you from?

AK MUSSE: I'm Ethiopian, from East Ethiopia. It's a region that has been exposed to conflict ever since I was born. Ever since I was a young age, I was exposed to displacement and the refugee life. I was a refugee myself. I was in the same situation, and I know what children need, when they're that young and exposed to displacement. So that's what motivated me to become a humanitarian worker; all my career is working humanitarian operations. I started as initial officer in the field here, but from 2012 to now, and in my international career for the last 10 years, all I do is humanitarian operations.

Did you spend time in a refugee camp as a child?

AK MUSSE: Yes. What happened was there was fighting between Ethiopia and Somali Eastern Ethiopia, and we had to flee to Somalia. I spent some years in a refugee camp before we went back to Ethiopia. So I know what the refugee life is. I was just 4, 5, 6 years old at that time, in the late 70s. 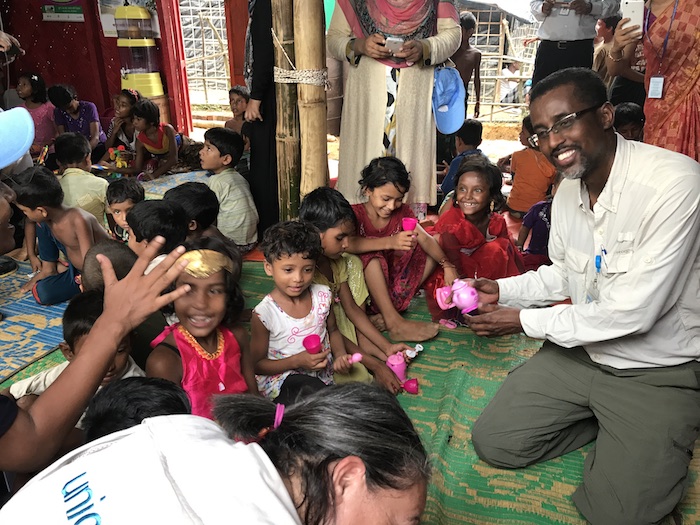 "One thing that struck me was the resilience of the children here in the camps," says UNICEF Senior Emergency Coordinator AK Musse (shown here in Bangladesh). "The hope and expectation that they have, despite all the tragic events that they have gone through, is really very touching. They have hope, they have a future ahead of them."

How did you end up marching with refugees in Europe?

AK MUSSE: I wanted to test myself. I was supporting refugees in Greece, Macedonia, Serbia and I was at the border in Macedonia and I saw these people walking and we helped them and immediately, they left. And I said, 'Why don't I go with them, and see what they face between this land and no man's land." So I walked with refugees from Macedonia to Serbia, almost five kilometers, but as we were about to enter Serbia the Serbian border guards stopped us and demanded our papers. So that's when I had to produce my U.N. passport and say, "I'm not a refugee, I'm U.N. staff." And they said, "No, go back and come through legal immigration."

I really wanted to see how it worked: Syrian, African, Afghan. Women, children, some of them pulling elderly people in wheelchairs. So I walked with them. I marched.

I really wanted to see how it worked: Syrian, African, Afghan. Women, children, some of them pulling elderly people in wheelchairs. So I walked with them. I marched.

What did you learn about the refugees' experience?

AK MUSSE: It was raining, cold, snowing and we gave them lots of blankets and heavy things. These people want to move very fast. So I when they leave, they really throw away most of the heavy stuff. That's what I found out, and it helped us to design our response. Instead of giving them heavy coats, maybe we can give them very light things that they can use temporarily. Instead of giving them big food items, we can give them very small biscuits, suckers they can just eat on the way. If you give them a lot of things that add weight, they just throw them away.

Some of them don't have proper shoes, so we have to give them proper shoes, so that they can walk that 5 kilometer border and the border between Serbia and Macedonia. So it helped me to really change the whole response design.

How were you and the refugees treated by the border guards?

AK MUSSE: For me, it's not a problem. They really just gave me entrance. But the way the Serbian and Croatian border guards were handling the refugees was a bit rough. They were slapping and beating them. Refugees face a lot of harassment at the border they enter. They use barbed wire close to the border, and families become separated: children on this side, the mother on this side.

Do you have children of your own?

Only six! What are their ages?

Do you speak to them about your work?

AK MUSSE: Yes, They know my job, and they understand there are issues. They know that everywhere I go, there's a crisis. The funny thing is, one day I was going to Geneva for a workshop. And they said, "You're going to Geneva? Is there a problem in Geneva?" I said "Come on, guys."

They know that usually I meditate, and that I travel globally. We live in New Jersey. I talk to my children every evening, or every day, depending on the time difference. They ask where I am, and what's happening. Sometimes I'm away for four weeks to two months, depending on the magnitude of the crisis and how fast the country office gets the capacity to take over the operation. But there are times, like in Syria, where I might go for six weeks or longer. It took me nine months to exit from Syria. I go to South Sudan every year, because the crisis keeps getting bigger and bigger and never ending.

[My children] know that everywhere I go, there's a crisis. The funny thing is, one day I was going to Geneva for a workshop. And they said, 'You're going to Geneva? Is there a problem in Geneva?' I said 'Come on, guys.'

Do you notice a difference between the way UNICEF responds to a crisis and the way other organizations respond?

AK MUSSE: Usually I don't, because UNICEF and other organizations work in coordination. We do almost the same thing, but the uniqueness of UNICEF is that, overall, we are a multisector organization. The relief people focus on food. And UNICEF might focus on one area, but UNICEF also deals with everything: water, sanitation, nutrition, education, child protection. We integrate our response. And we always put the child at the center: This is the child, what does the child need? We try to address all the needs of the child. If we cannot, we get our other partners to do it.

UNICEF usually already has a regular presence in most of the countries in the developed world. So, when a crisis starts to hit, we're one of the first groups to be really on the ground to respond. Because we're already there. Emergency programming is part and parcel of our regular programming. Every UNICEF country office is supposed to do risk programming and look at the risks and threats, and have contingency plans for each specific risk, so that whenever something happens, in the first few weeks, each country office has the capacity to respond until we mobilize initial resources. So that is also a unique difference that UNICEF has globally.

I remember in northeast Nigeria, I was able to coordinate the operation in the same way, and other organizations were piggybacking on UNICEF. We were the first people to be deployed, because we were already there as part of our program. So we were the ones who could lead the whole operation.

Help UNICEF continue to support Rohingya refugee children and refugees around the world. Your contribution can make a difference.