When there's an Ebola outbreak, UNICEF is there

An Ebola outbreak of any size is a public health emergency that requires a swift response due to the highly contagious and deadly nature of the disease.

The 2014-2016 Ebola epidemic in West Africa — the worst in history — killed more than 11,000 people in six countries: Guinea, Liberia, Mali, Nigeria, Sierra Leone and the United States. UNICEF played a major role in the response, delivering more than 8,000 metric tons of medical supplies and working with local communities to raise awareness of safe health and hygiene practices. Other critical tasks included:

UNICEF's Ebola response in the DRC

When Ebola resurfaced in the Democratic Republic of the Congo — there were three successive outbreaks from May 2018 through November 2020 — UNICEF and partners immediately responded, mobilizing teams of specialists on the ground and working to protect children from the consequences, including setting up nurseries to care for children whose mothers were undergoing treatment.

Some of the systems put into place to fight Ebola helped lay the groundwork for DRC's response during the COVID-19 pandemic. 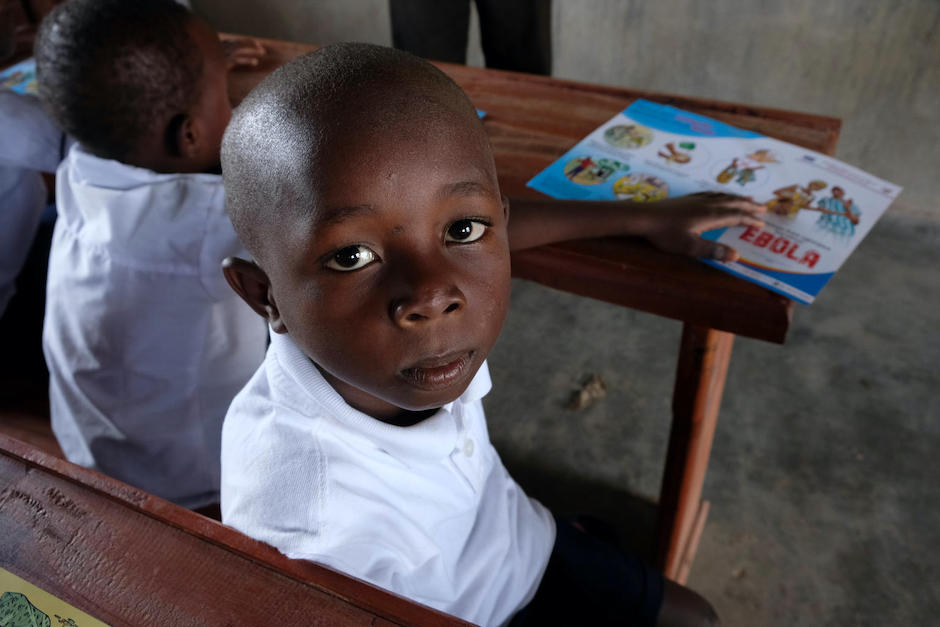 Kambale, 7, from Beni, DRC, learns the importance of washing hands to stop the spread of Ebola. © UNICEF/UN0235943/Nybo

Ebola virus disease, formerly known as Ebola hemorrhagic fever, is a rare but severe and often fatal illness in humans. It was first discovered in 1976 in former Zaire, now DRC, near the Ebola River, by Dr. Peter Piot of Belgium and his colleagues.

The virus is transmitted to people from wild animals and spreads in the human population through human-to-human transmission, via direct contact with the blood and other bodily fluids of those infected. The virus is relatively robust and can survive on materials contaminated with those fluids, such as bedding and clothing.

What are the symptoms of Ebola?

Ebola symptoms include fever, severe headache, redness around the eyes, diarrhea, vomiting, abdominal pain, muscle pain, unexplained bleeding or bruising, weakness and fatigue. Symptoms may appear anywhere from 2 to 21 days after contact with the virus, typically within 8 to 10 days.

Can Ebola be treated?

The fatality rate of an Ebola outbreak varies, but averages around 50 percent, and can be as high as 90 percent. Ebola is treatable; early intervention can significantly improve the chances of a patient's survival.

Who is most at risk for getting Ebola?

Children are at a higher risk of dying from Ebola than adults. One in 10 Ebola cases is under the age of 5. For most people, the risk of getting Ebola is low. The risk increases if you travel to Africa or visit or work in areas where Ebola virus outbreaks have occurred.

Is there an Ebola vaccine?

The injectable single-dose Ebola vaccine was developed by Merck with funding from the U.S. government. UNICEF, in partnership with the World Health Organization, the International Federation of Red Cross and Red Crescent Societies, and Médecins Sans Frontières and with support from Gavi, the Vaccine Alliance, established a global stockpile of the Ebola vaccine in January 2021 to enable rapid response to future outbreaks. (Prior to the vaccine's licensing, the WHO had authorized its compassionate use.)

Because Ebola cases are relatively rare and unpredictable, the vaccine will be held in reserve and administered to those at high risk of contracting the disease, including health and other frontline workers and those with a connection to a patient confirmed to have the virus (family, neighbors). UNICEF manages the Ebola vaccine stockpile, and can ship from its supply warehouse within 48 hours.

Learn more about how UNICEF responds to Ebola emergencies.

Top photo: A student washes her hands outside Elikya primary school in Mbandaka, DRC. A critical part of UNICEF's response in the event of an outbreak of Ebola or other highly contagious disease is to make sure schools have handwashing stations and other hygiene supplies available to students. © UNICEF/UN0367575/Tremeau

Fighting Ebola With Road Shows and Radio Spots in Burundi
More than a year after the Ebola outbreak began in DRC, the chance of the virus spreading to neighboring countries remains high.

Ebola Crisis in DRC Declared a Public Health Emergency
UNICEF and partners are on the ground working to stop the deadly outbreak in the embattled Democratic Republic of the Congo.

Survivors Care for Children Orphaned by Ebola in the DRC
Nearly 1,700 people — almost one-third of them children — have died since the outbreak began.

An Ebola Outbreak Rages in Democratic Republic of Congo
As the first Ebola deaths are confirmed in Uganda, health workers in the DRC are under attack from armed militia groups & a fearful public.

UNICEF Health Workers Are Fighting to Eliminate Ebola in the DRC
Teaching people in the DRC how to avoid Ebola is key to stopping the epidemic. UNICEF health workers are spreading the word.
END_OF_DOCUMENT_TOKEN_TO_BE_REPLACED