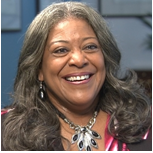 Jocelyn retired from Channel 2 WSB-TV after 45 years of service. She had been the Director of Editorials & Public Affairs at Channel 2 since 1983. From 1973-83, Jocelyn was an anchor/reporter/producer and assignment editor for WSB-TV’s Channel 2 Action News. In fact, she was the first African-American anchor of a Channel 2 newscast as well as the first African American news anchor in the Atlanta market.

In her management role, she supervised the selection, creation, and marketing efforts for all special events and community outreach programs for the Family 2 Family Project, WSB-TV community service projects, and WSB-TV & Radio Tours. In addition, Jocelyn was a producer, writer, editor, and narrator for various non-profit organization videos.

Among her personal honors; Jocelyn was recognized on the floor of the U.S. House of Representatives, by several members of the Georgia Congressional Delegation for her induction into the Georgia Association of Broadcasters Hall of Fame. She was recently inducted into the Atlanta Press Club Hall of Fame. She has been awarded the City of Atlanta’s Highest honor, the Phoenix Award, and issued special proclamations by The Atlanta City Council and the Fulton County & DeKalb County Board of Commissioners both for her years of service as well as retirement.

Jocelyn has won numerous other awards for her work with WSB-TV, including seven Southeast Regional EMMYS for Editorial Excellence from the National Academy of Television Arts & Sciences (NATAS). She was the first African-American inducted into the same organization’s Silver Circle, for more than 25 years in the field of journalism. She was also the first woman and first African-American to receive the Georgia Association of Broadcasters (GAB) Broadcaster’s Citizen of the Year Award, a lifetime-achievement award.

Her active Board affiliations include; The Ohio State University School of Communications Advancement Committee, UNICEF USA, The Trust for Public Land, Thanks Mom & Dad Fund , Sisters By Choice, AG Rhodes Board of Advisors, Communities in Schools Atlanta Advisory Board, and the Atlanta Victim’s Assistance Board.

She is a member of Leadership Atlanta Class of 1989 (the best class ever!)

Jocelyn is the mother of two sons, the late Teo Gebre-Hiwet and Robert-Fassil Gebre-Hiwet. Jocelyn is a NANA four times over.

In 2007, Jocelyn tackled one of her biggest bucket list items ever, as an avid motorcyclist, riding her first Harley Davidson from Fairbanks, Alaska to Key West, Florida, 7,688 miles in 21 days, as an Iron Torch Rider to help raise $250,000.00 for Special Olympics of Georgia.