With Your Zakat, UNICEF Is Helping Children Survive the Syrian Crisis | UNICEF USA

With Your Zakat, UNICEF Is Helping Children Survive the Syrian Crisis

Here are some ways generous donor support helps give hope to children growing up in the shadow of conflict.

After eight years of brutal civil war in Syria, more than 5.5 million children require some form of humanitarian assistance, including nearly half a million in hard-to-reach areas. UNICEF and partners are on the ground in Syria and across the region working to keep children safe and healthy and to help them resume their childhoods.

Below, some the ways your zakat donations, along with those of other UNICEF USA supporters, have helped give hope to children living in places where hope — like so many of life's essentials — is in extremely short supply. 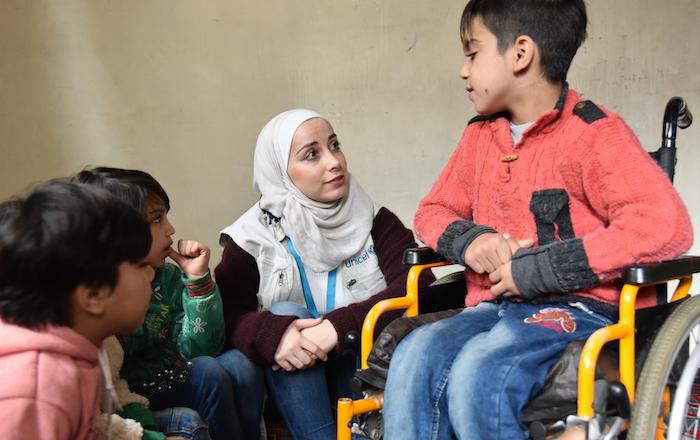 In Aleppo, Syria, a UNICEF-trained staffer talks with 11-year-old Abdullah, who was injured in a roadside bomb blast that killed his father and brother. © UNICEF/UN0287095/Grove Hermansen

Children who have been exposed to violence and displaced from their homes need help recovering from the trauma they've experienced. UNICEF provides counseling and programming to help children and caregivers heal and to restore a sense of normalcy. In the first five months of 2019, some 137,292 children (50 percent girls) received structured psychosocial support services through Child-Friendly Spaces and mobile teams in 12 governates in Syria.

Getting back to learning is one important way to restore equilibrium for children. Donor funding helped UNICEF reach over 922,000 displaced and host children with formal education and about 30,000 children with non-formal education opportunities in Turkey, Lebanon and Jordan in the first months of 2019. UNICEF Representative in Syria Fran Equiza stopped to chat with some young children during a visit to Al-Hol camp in northeastern Syria in July. Nearly 20,000 Syrian children and 29,000 children from 62 different countries have taken refuge in the camp. Many have survived heavy fighting. Most are under the age of 12. © UNICEF/UN0327930/Hawas

Many of the nearly 50,000 children living in Al-Hol camp in northeastern Syria are survivors of heavy fighting and have witnessed unimaginable atrocities. UNICEF is working with partners to provide them with urgently needed basic services and protection, including Child-Friendly Spaces where they can go to play and learn and talk to someone kind.

Mobile health and nutrition teams supported by UNICEF and the World Health Organization are vaccinating children in Al-Hol camp, screening them for malnutriton and referring urgent cases to nearby hospitals. Over the past few months, at least 520 unaccompanied or separated children have been identified and 214 have been reunited with family members. 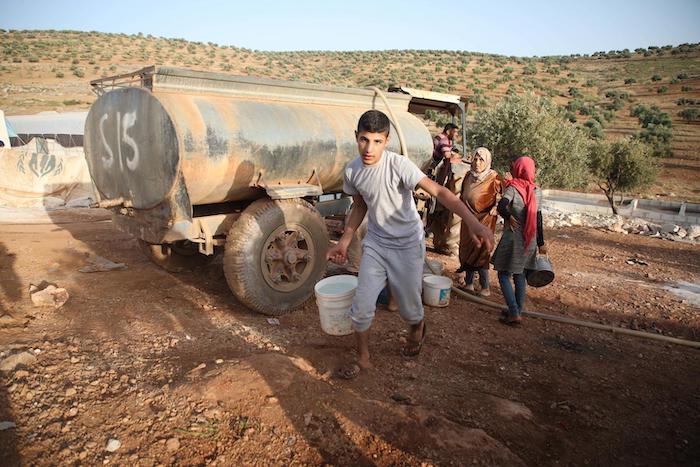 The civil war has decimated Syria's infrastructure, leaving families without safe, clean water and sanitation services. In May alone, an estimated 530,387 people had safe water to drink thanks to UNICEF operation and maintenance in Syria's Idlib governate. UNICEF also helped rehabilitate water systems and equip wells in rural Damascus, Quneitra and As-Sweida, reaching more than 1.7 million people in the first half of 2019. 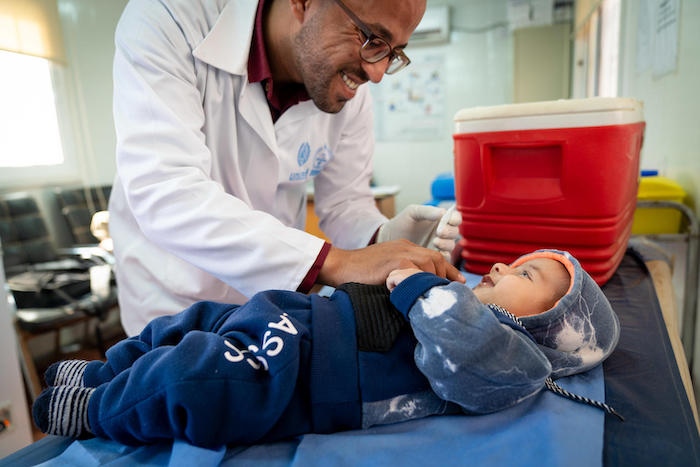 Malek, 4 months, is vaccinated in the UNICEF-supported health clinic in Jordan's Azraq Refugee Camp by Dr. Almanti, who has worked in the camp for five years. Malek was born in the camp. His family fled Raqqa, Syria and came to Jordan three years ago. © UNICEF/UN0303622/Herwig

At UNICEF-supported health clinics, children are vaccinated, screened for malnutrition and treated for common childhood illnesses. In April 2019 alone, 51,789 children under the age of 1 were vaccinated with diphtheria-tetanus-pertussis in Syria. At Jordan's Azraq Refugee Camp, vaccine coverage is at an estimated 95 percent.

"My job is good. I'm proud to help refugees in the camp," said Dr. Almanti (pictured above), the Ministry of Health Coordinator, who has worked in Azraq for five years. "Mothers in the camp are positive about vaccination and say that they want to protect their kids. We have community health workers who spread the word."

In northwest Syria, UNICEF activated more than 100 rapid response and mobile nutrition teams to reach more than 60,000 children under the age of 5, and pregnant and nursing mothers in Idlib and rural northern Aleppo.

The protracted humanitarian emergency in Syria and the surrounding region requires a steady stream of funding to save and protect children and to help them prepare for a brighter future. Thank you for your generous contribution. With your sustained support, UNICEF can continue providing the assistance and services children need to survive and thrive.

Top photo: There are nearly 1 million registered Syrian refugees living in Lebanon, more than half of them children. The three pictured here have taken shelter with their famlies in an informal settlement in Terol in the Bekaa Valley. © UNICEF/UN0299648/Modola