A Young Family's Struggle for Survival During Super Typhoon Rai

Families raced for shelter as the strongest storm to hit the Philippines in 2021 bore down on the country's southeastern islands. But the ferocious winds and heavy rainfall were far worse than they expected. One family's harrowing story.

As Super Typhoon Rai battered Dinagat Island in the Philippines on the afternoon of December 16, 2021, Nelly Cariño, a housewife in her 50s, kept watch out the window, checking to see if her daughter, granddaughter and the baby’s father were safe in another room across the yard.

Cariño’s family was staying in Cuarenta Elementary School, the designated evacuation center for residents of their village in San Jose. Local authorities warned residents that Super Typhoon Rai (known locally as Odette) would be strong, but when it arrived, its strength was far beyond what the residents had expected and prepared for.

Evacuees fled to an adjacent building, but soon it too collapsed in the whipping winds.

Nelly’s fears worsened when fierce winds rocked the school gym. The structure, built with lightweight materials in the middle of the school complex, eventually collapsed. Evacuees fled to an adjacent building, but soon it too collapsed in the whipping winds.

“I watched them, hoping to see the members of my family,” Nelly recalls. “To my horror, the three of them didn’t come out. They were trapped.” 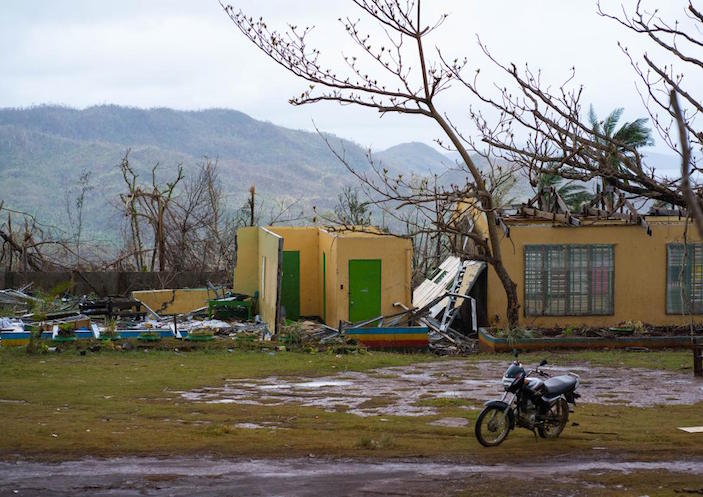 Two bathrooms are all that remain of a collapsed school building, left, on Dinagat Island where evacuees took shelter as Super Typhoon Rai battered the Philippines on December 16, 2021. © UNICEF Philippines/2021/Louie Pacardo

Seventeen-year-old Nicole Angela Cariño was not aware that her mother was worried about her. She was preoccupied with her daughter, 3-month-old Alia. Nicole cradled Alia in her arms. The baby slept soundly as Typhoon Rai raged outside.

When the school gym collapsed next to the classroom where they were sheltering, Nicole’s husband, 26-year-old Mike De Jesus, acted quickly. “He tried opening the door,” says Nicole, “but it would not budge against the rubble outside, so he rushed to the other side of the room and kicked out the window.”

They rushed into a nearby school building. “When we noticed that the building might also collapse, we moved to the principal’s office near the road,” says Nicole. 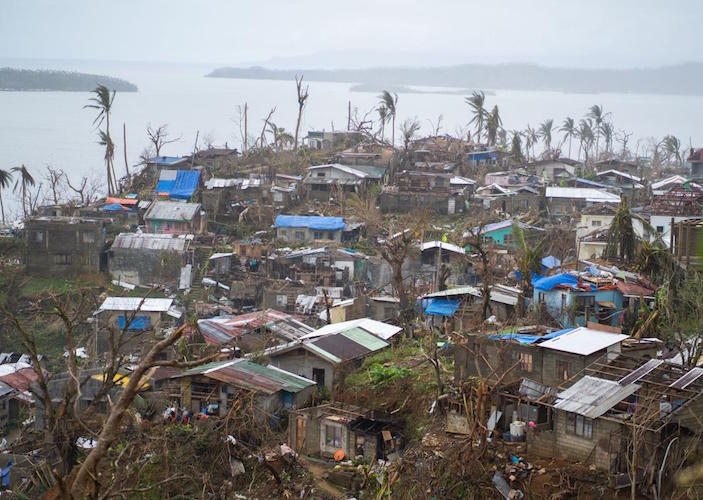 After the onslaught of Super Typhoon Rai (known locally as Odette), residents of San Jose, Dinagat Islands province, had to rebuild their houses with the debris that littered the streets. Roofs with mismatching parts are a common sight all over town. © UNICEF Philippines/2021/Louie Pacardo

Huddled in the principal's office, other evacuees welcomed the family and helped Nicole protect her baby. “They covered me and Alia with mats and pillows because water kept coming in through the holes in the roof and the cracks in the windows,” says Nicole.

When Alia woke up, she smiled at the people around her. They cooed at her, and she kept smiling. “Never did she show a sign of distress,” says Nicole. “She kept us entertained and distracted from what was happening outside.”

When the typhoon left at about 6:30 p.m., Nelly searched for her missing family. She couldn't see them in the dark amid the crowd. When she finally found them, Nicole greeted her with a tight hug. They both cried in relief and exhaustion. “I really thought I had lost them,” says Nelly.

Nelly Cariño walks to the classroom where most members of her family have evacuated. More than a week after Super Typhoon Rai wreaked havoc on Dinagat Island, the family still can’t go home. They don’t have enough resources to rebuild what they have lost. © UNICEF Philippines/2021/Louie Pacardo

More than a week after the ordeal, the Cariño family is still staying in the school. They don’t have enough resources to rebuild their houses. Mike lost his job and Nicole is in Grade 11. The modular learning system implemented during the pandemic allowed her to continue her studies during her pregnancy and later while taking care of her baby.

Without any partitions in the room or a designated breastfeeding area in the evacuation center, Nicole has to nurse Alia in full view of other people. “I’m used to doing it,” she says. “I see other mothers do it, so I stopped being so self-conscious about it.” 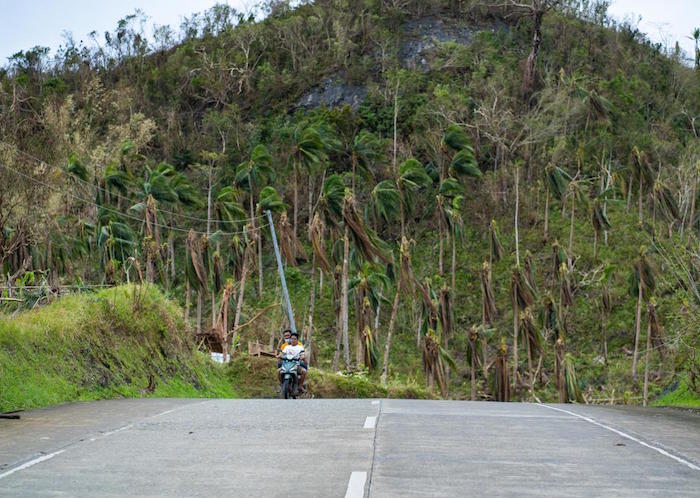 More than a week after Super Typhoon Rai battered Dinagat Island, the grass has started to grow and the trees that managed to stay upright have sprouted new leaves. It may take years, however, for the coconut trees to recover and bear fruit again. © UNICEF Philippines/2021/Louie Pacardo

Her biggest worry is that Alia is not getting enough sleep and might get sick in the evacuation center. They share the classroom with several other families, and noise is inevitable where they are.

Other people staying in the room have been falling ill with fever, cold, cough or a combination of those. “It must be because we got wet during the typhoon,” says Nelly. But given that the pandemic is still here, it’s difficult to tell if people are getting sick because of the poor conditions in the evacuation center or a result of COVID-19 spreading.

UNICEF is on the ground in the Philippines, distributing emergency supplies, conducting assessments and leading the water, sanitation and hygiene (WASH), education and child protection clusters together with the Philippine Government and partners. UNICEF is asking for $39M to provide services for nearly 300,000 children whose lives have been turned upside-down by the devastating storm.

Learn more about UNICEF's emergency response to Super Typhoon Rai in the Philippines.

Top photo: Seventeen-year-old Nicole Angela Cariño, her husband, Mike De Jesus, and their 3-month-old baby, Alia, have been living in a school classroom with several other families since their home was destroyed when Typhoon Rai hit the Philippines on December 16, 2021. UNICEF is on the ground, working with partners to provide emergency supplies and services to those in need. © UNICEF/UN0572660/Pacardo