Children’s marches, family rallies and block parties in Brooklyn, New York are empowering kids to get involved and helping parents talk about sensitive issues like police violence and structural racism.

After more than three months of protests this summer, it’s clear that the Black Lives Matter movement is only gaining momentum.

Though the August 28 shooting of Jacob Blake by a police officer in Kenosha, Wisconsin has brought renewed media attention on police violence and racial injustice, the truth is that peaceful demonstrations have remained a steady presence in neighborhoods across the country. And kids aren’t just watching from the sidelines; they’re actively participating and joining their communities in calls for justice.

Back in June, photographer Ximena Natera captured portraits of young Americans participating in a number of protests and community events in Brooklyn, New York for her series “Children Take the Streets.” For many, it was their first experience as activists, and a stirring example of how our collective voices can be used to effect real change. We recently caught up with a few of these children, as well as their parents, to learn what getting involved in the movement has meant to them. 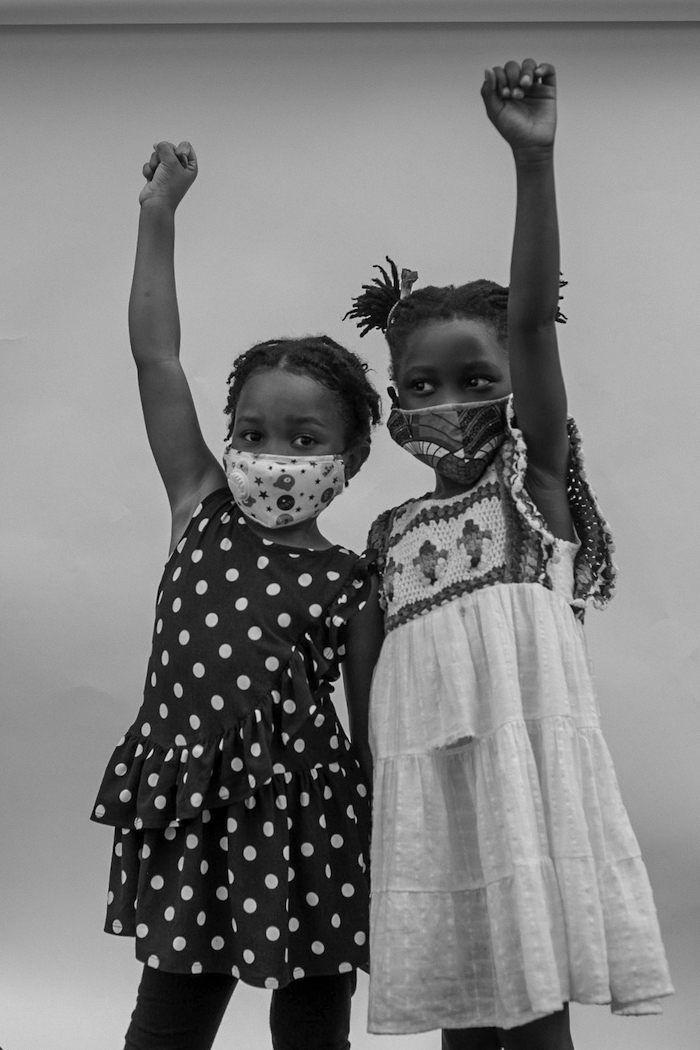 Friends Kennedy (left) and Amina reunited at the Children's March outside the Brooklyn Public Library in Brooklyn, New York in June, 2020. © Ximena Natera

In the days that followed George Floyd’s death at the hands of Minneapolis police on May 25, 5-year-old Kennedy had seen protesters outside her window once or twice a day, sparking her own interest in getting involved. “She was really like, ‘Mommy, can we go please?” recalls her mother, Katrina. The perfect opportunity arrived in the form of a children’s march and rally outside the Brooklyn Public Library that brought hundreds of families together. “The vibe there was so positive,” says Katrina. “It was so beautiful.” For young Kennedy, the rally also gave her a chance to see friends for the first time after two months of social distancing. “I remember that everybody was walking and I kept on bumping into my classmates,” she says.

I want all the people to be treated fairly," says 6-year-old Amina. "By helping them, and caring, and loving.

One of them was 6-year-old Amina. Her mother, Ngone, was initially reluctant to talk about what was happening, given her daughter’s young age, but it was hard to avoid the news coverage and conversations in the neighborhood. “I decided that it was maybe time to actually talk about it,” says Ngone. The Sesame Street CNN special was a helpful place to start, and only piqued Amina’s curiosity more. The rally gave Amina a new outlet to express herself and to call out for change. “I want all the people to be treated fairly. By helping them, and caring, and loving,” she says. She also remembers at one point that kids were asked what they wanted to do when they grew up. Amina said she hopes to become a ballerina. Her friend Kennedy wants to be a news reporter. 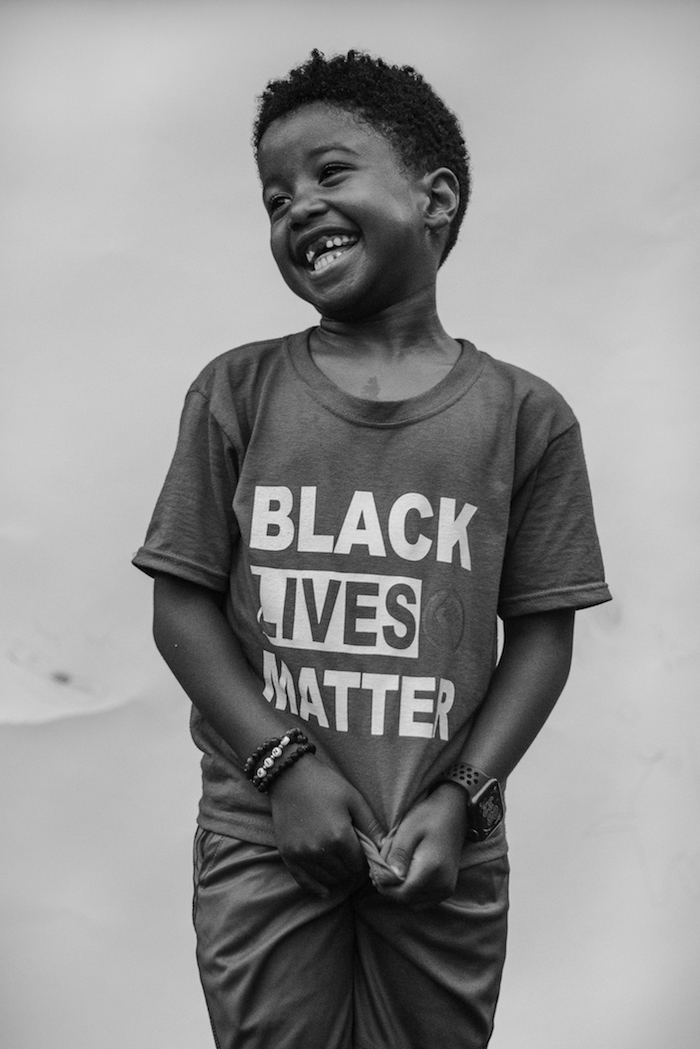 A couple days later, six-year-old Dash and his family joined another neighborhood protest. “I want cops to stop killing us, because if a guy is just carrying chips and juice and has his hoodie on, it doesn't mean he's a bad guy,” he says, reflecting on why he marched. “Black lives matter. Their houses, love, happiness, family.”

I want cops to stop killing us," says Dash, 6. "Because if a guy is just carrying chips and juice and has his hoodie on, it doesn't mean he's a bad guy.

In the days that followed the rally, Dash continued to talk about social activism in school, and wanted to find a way to give back. ”It seemed as if there was a fire that was lit underneath him,” says his mother, Nadine. Drawing inspiration from a treasured crystal his mom had purchased for him over a year ago, Dash came up with a new business venture, ‘Done by Dash.’ “We're making crystal bracelets for everybody, but they're mostly for Black kids so they can feel strong, healthy and brave,” he says. “And we're donating some of the money to Black communities.” 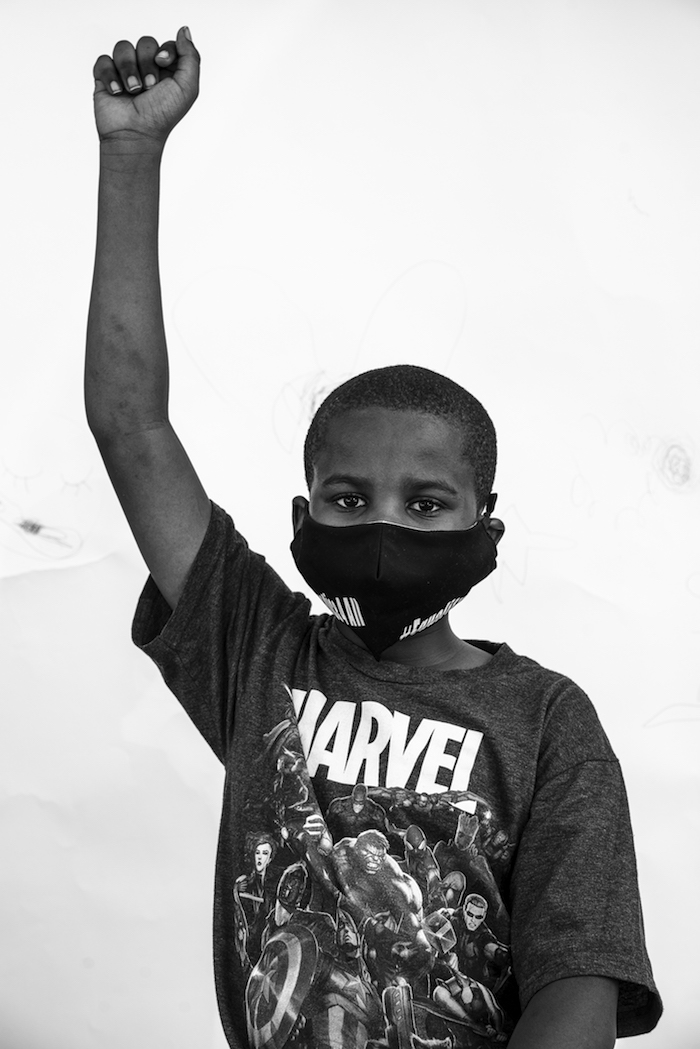 Xavier, 9, at the Stroll for Freedom in Bedford-Stuyvesant, Brooklyn, New York in June 2020. © Ximena Natera

In Bedford-Stuyvesant, the Stroll for Freedom brought kids like Xavier, 9, together for a march and neighborhood party that highlighted the impact of racism on the mental health of the kids. At first, Xavier didn’t want to go because he was worried about getting beaten up by the police. “He stood beside me while we marched. I believe he has a better understanding of why we have to protest,” says his mother, Tonya.

We were marching so we can get our freedom because we matter as much as the next people," says Xavier, 9. "I matter, and everyone else in my family matters.

Xavier echoes this sentiment: “We were marching so we can get our freedom because we matter as much as the next people. I matter, and everyone else in my family matters.” 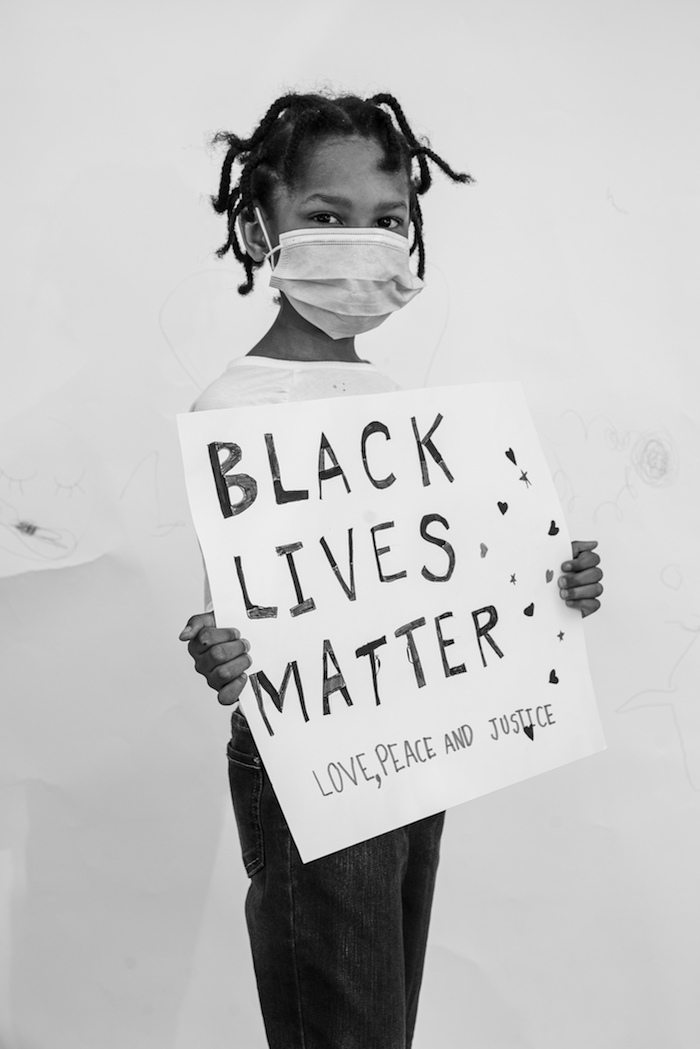 Nayla, 6, at the Stroll for Freedom in Bed-Stuy in Brooklyn, New York in June 2020. © Ximena Natera

Six-year-old Nayla remembers a joyous atmosphere at the Bed-Stuy event. “I went marching with my friends and I yelled out, ‘Black lives matter,’ she says. "I felt happy because I am Black, and I am happy to be Black."

I went marching with my friends and I yelled out, 'Black lives matter,'" says six-year-old Nayla. "I felt happy because I am Black, and I am happy to be Black.

It was an eye-opening experience for Nayla, says her mother, Natania, who found it validating to see the people she cared about supporting her daughter, her culture and her heritage. “It’s important for children to understand that instead of just seeing a certain type of face all the time, their face is also up there, and people of other colors are telling them, ‘You're important, so you don't have to feel left out,’” says Natania.

Contact your Senators and urge them to cosponsor the Justice in Policing Act (S. 3912), a first step toward reimagining public safety in a just and equitable way.

UNICEF's Child Friendly Cities Initiative is working with local governments across the country to help create just and equitable cities and communities. Learn more about how UNICEF is helping to make communities safer and more welcoming for children here.