"When You Have an Education, Nobody Can Take It Away from You"

Muzoon Almellehan, the first person with official refugee status ever to be named a UNICEF Goodwill Ambassador, has never doubted the rock-solid value of a good education — especially for children growing up in conflict zones.

Now 19 and headed to college, Muzoon was only 14 when the Syrian civil war forced her family to leave their home in Daraa in the middle of the night and cross the border into Jordan.  "Even as a child, I knew that education was the key to my future, so when we fled Syria, the only belongings I took with me were my school books," she recalls.

During her family's 18-month stay in Za'atari, one of the world's largest refugee camps, Muzoon noticed a distressing phenomenon: Fully half of the 40 girls in her class dropped out of school to get married. Anxious to secure a stable future for their daughters, Syrian refugee parents were pulling them out of the classroom and pushing them into early, and often disastrous, marriages.

Muzoon began a campaign... pleading with refugee parents to allow their young daughters to stay in school.

A 2014 study showed that nearly one-third of all registered marriages among Syrians in Jordan involved a child. Many of these ill-fated marriages end in divorce, leaving the girls with no education and few prospects.

Alarmed by the trend, Muzoon began a campaign, going door-to-door from tent to trailer in the settlement, pleading with refugee parents to allow their young daughters to stay in school. "I would tell them that we are the future," she says. 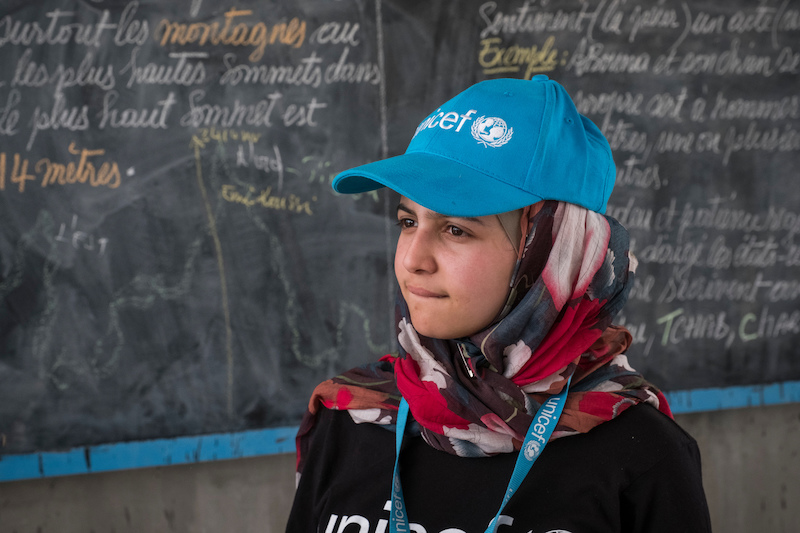 The first person with official refugee status ever to be named a UNICEF Goodwill Ambassador, Muzoon Almellehan, visits Yakoua School in Bol, Lake Region, Chad. The school has only eight teachers for 800 students, 500 of them displaced children. © UNICEF/UN060490/Sokhin

As Muzoon's reputation as an advocate for girls' education grew, some compared her to Pakistani teenage activist Malala Yousafzai, calling her the "Malala of Syria." The two met in person and became fast friends when Malala toured refugee camps in Jordan. In 2014, Malala invited Muzoon to be her guest at the ceremony in Oslo when she became the youngest person ever to be awarded the Nobel Peace Prize.

As Muzoon's reputation as an advocate for girls' education grew, some called her the "Malala of Syria."

Now, as a UNICEF Goodwill Ambassador, Muzoon will continue her campaign to ensure that girls everywhere receive a quality education. At this month's G-20 Summit in Germany, Muzoon told her story and addressed world leaders on the vital importance of education rights for all.

"As a refugee, I saw what happens when children are forced into early marriage or manual labor: they lose out on education and they lose out on possibilities for the future," says Muzoon. "That's why I am proud to be working with UNICEF to help give these children a voice and to get them to school."

In an inspirational video letter, Muzoon offers a message of hope to fellow refugees: "Look how much you have been through and you are still standing. You are much stronger than you think."

Muzoon recently traveled with UNICEF to Chad, where nearly three times as many girls as boys of primary school age are missing out on an education. Overall, at the primary-school level, Chad has the second highest rate of out-of-school children in the world (50 percent), exceeded only by South Sudan, where close to 72 percent of children have never seen the inside of a classroom.

"When children are forced into early marriage or manual labor, they lose out on education... and possibilities for the future."

UNICEF works tirelessly in conflict-affected areas to get children back to learning, by providing catch-up education and informal learning opportunities, training teachers, rehabilitating schools and distributing school furniture and supplies. In 2016 alone, UNICEF provided learning materials for 15.7 million children around the world and supplied educational equipment to more than 330,000 classrooms.

Every child has the right to learn. Support UNICEF's efforts to bring quality education to children worldwide.