When a Refugee Camp Becomes an Innovation Incubator

In Jordan, young people fleeing Syria's civil war are learning about social entrepreneurship and inventing ingenious solutions to problems faced by people in their community.

For most of her life, 18-year-old Siba lived in the bustling Syrian market city of Dara’a, less than 10 miles north of the Jordanian border. Then came the civil war. As — seemingly overnight — Siba’s hometown transformed into a deadly battleground, she and her family joined the massive wave of refugees fleeing to nearby Jordan.

Life Away From the Battleground

Now Siba is just one of approximately 750,000 Syrians living in Jordan — and one of 80,000 who currently calls the sprawling Za’atari refugee camp home. The camp provides Siba with the security, shelter, medical care, food and education that are impossible to find right now in places like Dara’a, which has been reduced to little more than rubble.

But make no mistake: Life in a refugee camp is always a choice of last resort. For young people like Siba in particular (more than 60 percent of the camp population is under 25), it can feel as though they have landed in a treeless, dust-coated state of permanent limbo.

The Za’atari refugee camp in Jordan, where more than 60 percent of the population is under the age of 25. © UNICEF/UN033493/Al-Koud

The challenge, then, for UNICEF and partners is to ensure that displaced youth are not merely surviving in refugee camps like Za’atari and nearby Azraq, but are afforded the skills, challenges and opportunities that can give them control over their lives, both present and future.

An Innovation Start-Up Event Under Canvas

And so, for two days in May, Siba joined over 100 Za’atari young people for the first ever ‘Start-Up Za’atari’ event, held by The One Foundation and UNICEF (and supported by a dozen national organizations, as well as successful business professionals who volunteered their time). 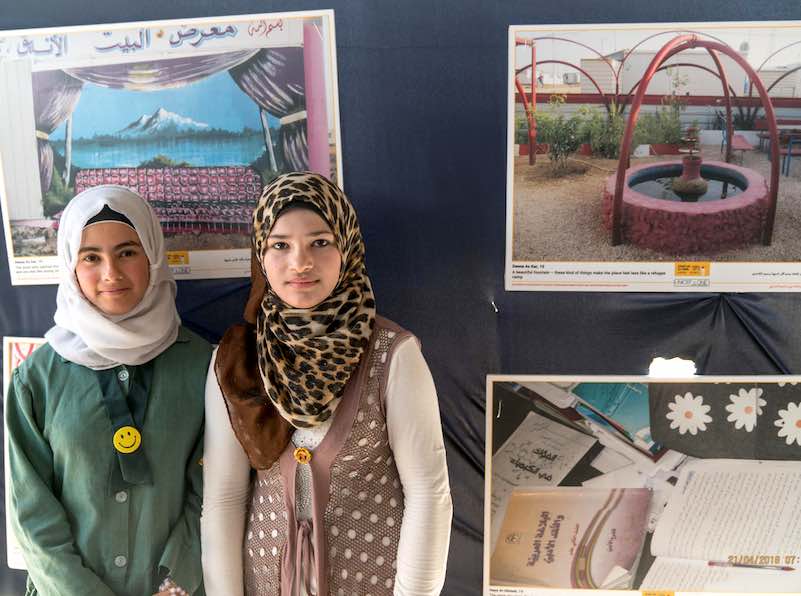 Girls stand beside a photo exhibit they created for Start-Up Za’atari. © UNICEF/UN0207007/Herwig

In large tents and a hangar-like shelter filled with colorful posters, clusters of tables, laptops and myriad supplies, the young people participated in a marathon of skills workshops — including robotics, fashion design and artificial intelligence — designed to foster their creativity and empower them to become co-creators, rather than recipients, of the products and services that impact their lives in the camp.

These young people have immense talent and our job is really to facilitate that. To unleash their talent and potential.

It was also an opportunity for young people to showcase creations that they had already developed while participating in one of Za’atari’s Social Innovation Labs. Through the SILs, which began two years ago, young people get together to collectively identify problems that face their community and then brainstorm, pitch solutions and design and create prototypes of inventions or programs that address the problems.

Along the way, they learn teambuilding, troubleshooting and a core set of technical skills: everything from welding to coding. To date, inventions have included solar-powered phone chargers, water distilleries, reading lamps made from recycled materials, a gas-powered oven, winter rugs, an ice box and a medicine cooler made of recycled materials and two types of washing machines. Some of the most promising projects even receive small grants for further development. There are now a total of nine SILs in the Za’atari and Azraq refugee camps. 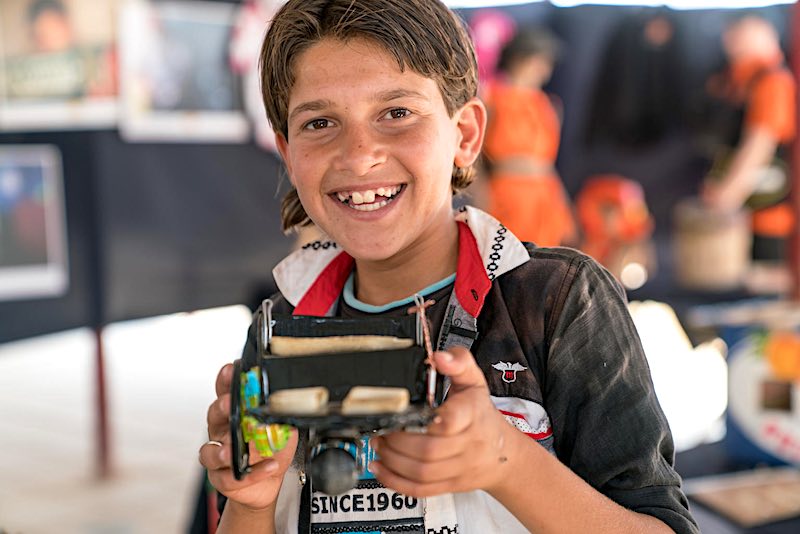 Mahmoud, 13, holds up a model of a lever-propelled wheelchair he invented for Start-Up Za’atari.  © UNICEF/UN0212084/Herwig

At Start-Up Za’atari, 13-year-old Mahmoud couldn’t contain his excitement as he showed off the small-scale prototype he created — using recycled material including cans and foam padding — for an ingenious wheelchair that can be propelled forward with a hand lever. “I took this model wheelchair to explain my idea to my neighbor,” Mahmoud said. “He has a daughter who has a disability. It will enable her to be more independent and not have to ask others for help. He loved the idea very much.” 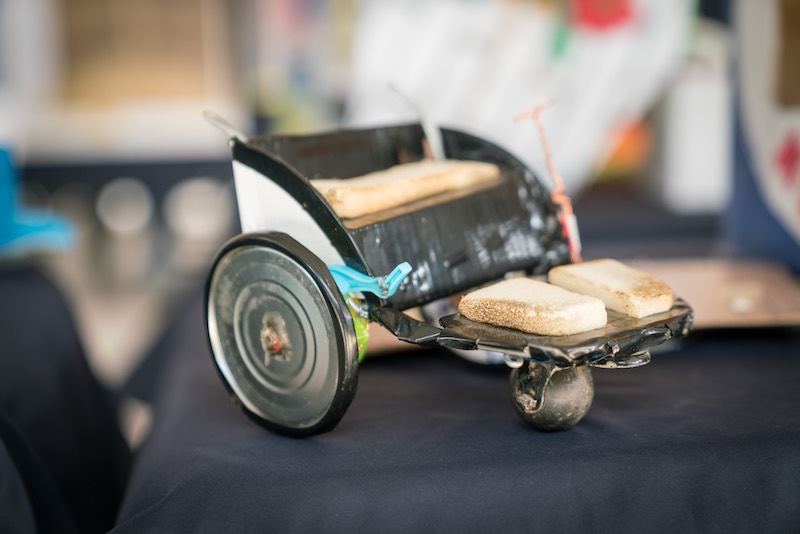 The prototype for a lever-propelled wheelchair, invented by 13-year-old Mahmoud to help a disabled neighbor. © UNICEF/UN0207045/Herwig

Gazing around at the Start-Up Za’atari participants, UNICEF Innovations Specialist Robyn Lui saw a roomful of future leaders. “These young people have immense talent and our job is really to facilitate that. To unleash their talent and potential,” she said.

Displaced Young People Eager to Solve Problems in Their Own Communities

Two months after Start-Up Za’atari, Siba and 14 other participants were on a bus headed to the Fab Lab, a cutting-edge start-up incubator in Irbid, Jordan. They were part of the brand-new UNICEF X ONE Humanitarian Changemakers Lab, a partnership between UNICEF and The One Foundation which will support 200 youths between the ages of 18 and 24 from Azraq and Za’atari camps. The program goes a step beyond the Social Innovation Labs. Changemakers receive regular access to the Fab Lab and support from business incubator ShamalStart. As with the Social Innovation Labs, participants are challenged to specifically identify and solve issues in their own communities. Syrian refugee Siba, 18, on the bus to visit start-up incubator Fab Lab for support on her project to address problems connected to early marriage in her community.  © UNICEF/UN0216407/Herwig

Siba joined the Humanitarian Changemaker training program because she wants to work on practical solutions to social issues facing the youth in her camp — particularly early marriage. Looking both playful and elegant in a white ruffled dress paired with jeans and sneakers, Siba listened intently as Fab Lab entrepreneurs gave advice on how to start a project from scratch and develop it to scale.

I want to make a garden in the camp. We know that green gives hope and life.

“In our community, the problem of early marriage is common — inside and outside camps,” Siba explained. “We are working with UNICEF on the issue of early marriage and would like to develop it further. We are planning a theater full of people to do sketches and plays, to show people the dangers of this issue. I do not think that early marriage has any advantages.” 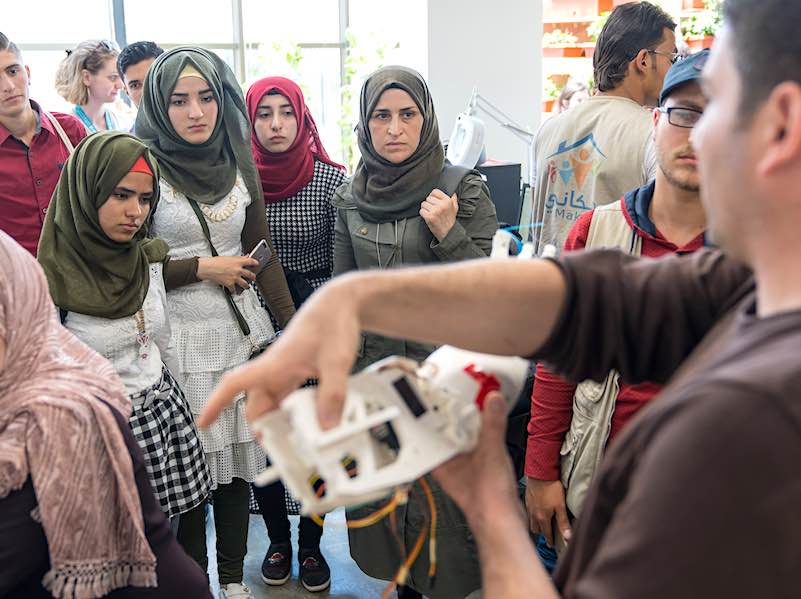 Eighteen-year-olds Siba (in white dress) and Hyatt (in checked skirt) listen to a presentation by a Fab Lab entrepreneur. © UNICEF/UN0216394/Herwig

Walking around the Fab Lab, Siba’s friend, Hyatt, was inspired by the design of a spherical, tiered garden big enough to walk through. After thoroughly exploring the garden, Hyatt said, “I want to make a garden in the camp  — a flower garden with a connected watering system that uses recycled water. Many children and people are feeling down. When they see this, they will be happy. We know that green gives hope and life.”

Hope is essential for young people in the camps. They have lost so much: their homes, their schools, friends, family members and even a sense of certainty about what the future will bring. With these innovation labs, young people are learning to look at problems and think, “Wait, I have the power to solve this myself.” One day, they will take that belief — and their skills — back to Syria. And they will start to rebuild.