"We Honor Their Work Best by Carrying On"

Despite a deadly attack on an Aleppo-bound convoy, UNICEF remains committed to providing Syrian children with critical aid.

In Aleppo, however, hundreds of thousands of children continue to face life-threatening challenges. Four days ago attacks damaged the water pumping station supplying water to 250,000 people in eastern Aleppo. More than 100,000 children have been forced to resort to drinking water from shallow bore holes and craters where water from broken pipes gathers.

Earlier attacks left nearly 2 million people in Aleppo without water. In a statement, UNICEF Syria representative Hanna Singer said, “Depriving children of water puts them at risk of catastrophic outbreaks of waterborne diseases and adds to the suffering, fear and horror that children in Aleppo live through every day."

Yesterday, a U.N. convoy delivered critical UNICEF health, hygiene and nutrition supplies to Moadamiyeh, a town of some 45,000 people, including an estimated 20,000 children, just outside Damascus. This was the first humanitarian convoy to reach the community since July 24.

Last night, an inter-agency humanitarian convoy transporting relief supplies for thousands of families in Aleppo, Syria was attacked. Humanitarian workers were killed, and trucks and critical UNICEF supplies were destroyed. UNICEF Executive Director Anthony Lake has issued the following statement on the attack.

“All those with a conscience must condemn the attack on a humanitarian convoy in Aleppo that killed and injured humanitarian workers.

“The inter-agency convoy was carrying desperately needed humanitarian supplies for tens of thousands of people in extreme need.

“These supplies were for children who have already suffered more than five years of war.  Five years of callous disregard for their lives, their wellbeing, and their future.

“Our deepest sympathy is with the families of those killed in this heartless attack, and our thoughts are with all those who were injured.  These heroes risked their lives – and lost their lives – working to save others in a human catastrophe that has gone on for far too long, and cost far too many lives.”

“We honor their work best by carrying on. UNICEF remains committed to deliver aid to the more than six million children and their families who are in desperate need of help.

“We call again on all parties to the conflict to honour their obligations under international humanitarian law to protect civilians and civilian infrastructure and to facilitate unconditional, unimpeded and sustained access to people in desperate need – wherever they are in Syria.” 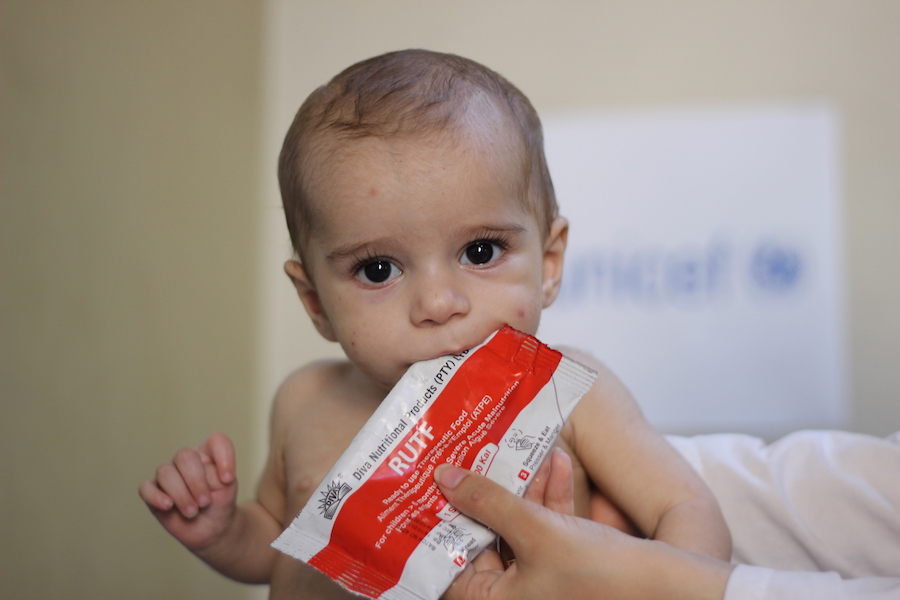 On September 1 in western Aleppo city, nine-month-old Ali receives treatment for malnutrition. UNICEF outreach teams in the city conduct house visits to screen children for malnutrition and make sure they get the treatment they need.

Photo at top: On September 13, a UNICEF worker speaks with displaced mothers and children living in make-shift tents and shelters in the neighborhood of Majabel, in western Aleppo city, during an inter-agency mission for the rapid assessment of humanitarian needs.