“This devastating pattern of warfare in Syria seems to have no checks and balances," says Dr. Peter Salama, UNICEF Regional Director for the Middle East and North Africa. In the space of three hours, three hospitals were attacked in east Aleppo, killing babies, children and medical personnel.

Statement by Peter Salama, UNICEF Regional Director for the Middle East and North Africa on attacks on medical facilities in Syria

“Everyone must question their humanity when babies have to be taken out of incubators because of attacks on hospitals.

UNICEF confirms that three medical facilities were attacked in Aleppo today in the space of three hours. The al-Bayan and al-Hakim hospitals, within a distance of 300 metres, and the Abdulhadi Fares clinic, all in the eastern part of the city were hit.

The Al-Hakim hospital, a UNICEF supported facility, is one of the few that still provide pediatric services. This is the second attack on the hospital.

This devastating pattern of warfare in Syria seems to have no checks and balances.

Hundreds of medical facilities that provide critical life-saving health care for thousands have been damaged or destroyed. In the past two weeks alone, six health facilities were attacked across the country.

Surely this should shake the moral compass of the world. How long will we allow the children of Syria to suffer like this?"

Learn more about UNICEF's efforts to help the children of Syria 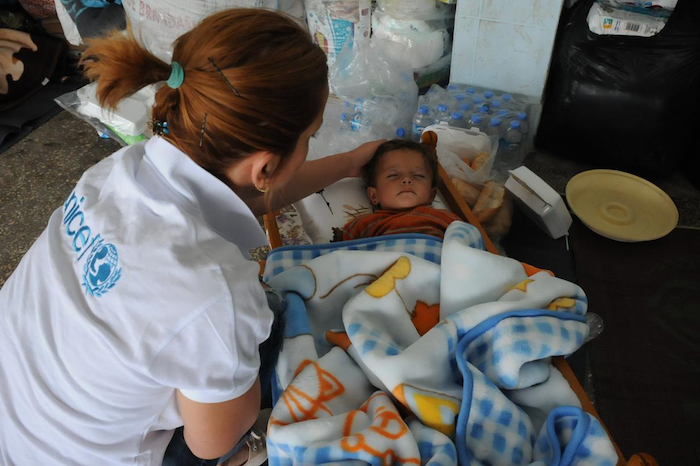 UNICEF staff work with children in a primary school in Sanliurfa Province, Turkey, near the Syrian border. Hundreds of thousands of Syrian refugees from a besieged Kurdish town in the north-western Aleppo Governorate, have crossed into Turkey. Approximately 60 percent of them are children. © UNICEF/NYHQ2014-1710/Yurtsever 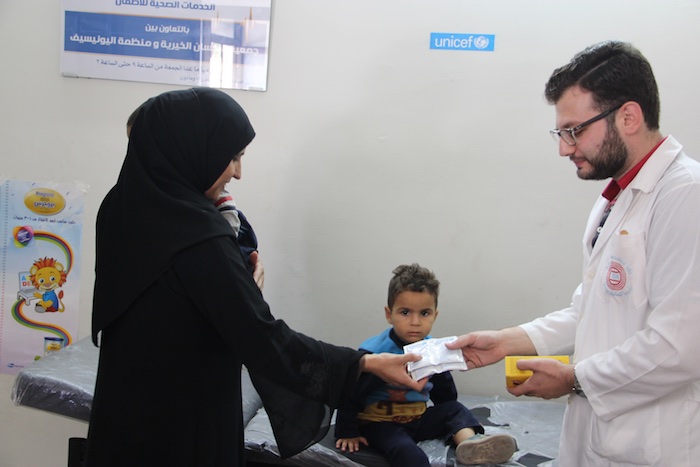 A doctor dispenses medicine to a woman holding a child at a UNICEF-supported clinic in Aleppo. © UNICEF Esraa, 4, and her brother Waleed, 3, sit on the ground near a shelter for internally displaced persons. An estimated 3.7 million Syrian children – 1 in 3 of all Syrian children - have been born since the conflict began five years ago. © UNICEF/UN013172/Al-Issa