UNICEF's Ascent Into the Drone Age

UNICEF USA talks to UNICEF's Drone Lead about his passion for UAV technology and its potential to save and improve lives.

In June 2017, UNICEF and partners opened a drone testing corridor in Malawi to investigate various ways Unmanned Aerial Vehicles (UAVs) could be used for humanitarian work. Many startup companies, university researchers and other drone experts from around the world jumped at the chance to try out their ideas.

Michael Scheibenreif from the UNICEF Office of Innovation oversees the activities as Drone Corridor Lead. UNICEF USA recently caught up with Scheibenreif to find out what makes him so passionate about the technology and its potential to save and improve lives. Here are excerpts from that conversation:

Why did UNICEF choose Malawi as the location for this testing corridor?

MICHAEL SCHEIBENREIF: Malawi is where we ran a very successful trial using drones to expedite HIV testing for babies. That trial demonstrated the huge advantages to using drones to transport medical supplies to doctors and health workers in remote, underresourced areas. Getting essential medicines and other time-sensitive items over that "last mile" is a huge problem. I've talked to a lot of village doctors in Malawi. They spend four to eight hours on bicycles, pedaling over dirt roads to get to the central repository or district hospital to pick up drugs and other items. That's four to eight hours they're not spending with patients. 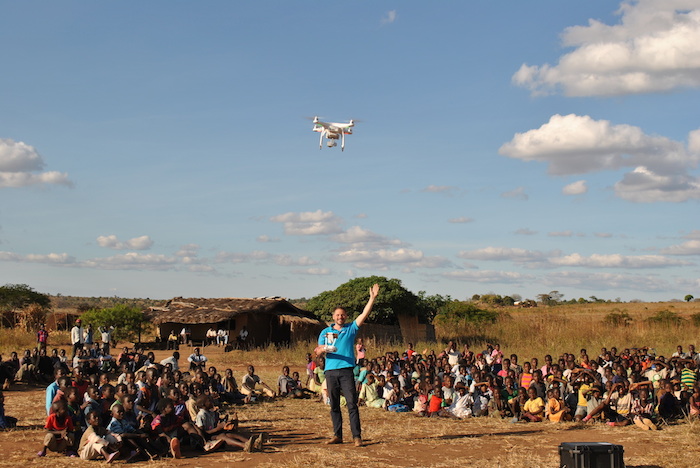 And if the roads are flooded, as happens quite often during the rainy season...

MICHAEL SCHEIBENREIF: You can't even make the trip. This is a great example of how developing countries — countries that lack infrastructure — stand to benefit so much more from drone technology than industrialized ones. Building a comprehensive, reliable network of roads in a country like Malawi would take decades and cost a lot of money. You could get a system of drone deliveries up and running a lot faster, and cost effectively. I saw a TV commercial once where a drone delivers sneakers to someone in 20 minutes. Does anybody really need sneakers in 20 minutes? But if you can get medicine in 20 minutes, you can save a life.

How much can one drone carry?

MICHAEL SCHEIBENREIF: That depends on the drone. There are many different kinds, and each team that comes to Malawi for testing brings their own. Some of these remotely-piloted aircraft systems can carry from 5 to 10 kg [11 to 15 pounds] worth of vaccines, antimalarials, blood and other essentials. Using drones to transport medicine helps ensure the doctors have what they need, when they need it. It also prevents spoilage and theft.

What else are you testing with drones?

MICHAEL SCHEIBENREIF: Connectivity is another important use case for us. In Malawi and many other developing countries, wireless network coverage is spotty. It's getting better, but it's still an issue if you're in an out-of-the-way place. You might have to walk for half an hour up the side of a mountain to get a connection.

That's not a very efficient way to check your email.

MICHAEL SCHEIBENREIF: Not at all [laughs]. But we have found a way to use drones to pick up the signals from a 3G network — or 4G, if there's 4G available — and relay it down. We call that a connectivity drop. We can also use drones to physically transport data in a flying USB stick. As it flies overhead, the intended recipient can download the data via Bluetooth or over Wi-Fi. You can have a drone fly by once or twice a day, or every other day, depending on how many drones you have, to support these data exchanges. 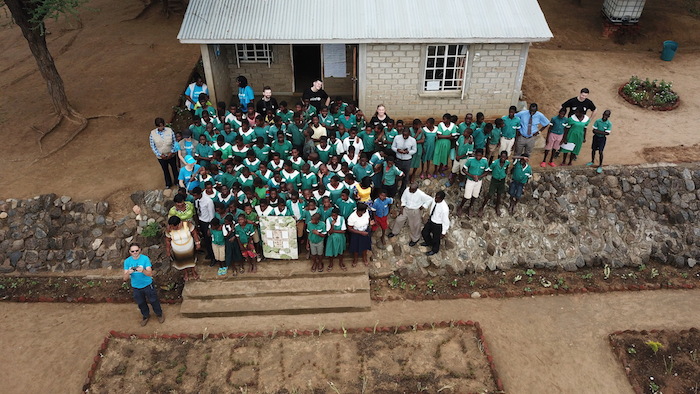 UNICEF Drone Corridor Lead Michael Scheibenreif uses a drone to snap this photo of Malawian students outside the Dzimbiri School as part of a drone demonstration. The high-tech imagery captured by drones can be used to guide response efforts in the event of an emergency. © UNICEF/Malawi/2017/Scheibenreif

You've said that there are three use cases. What's the third one?

MICHAEL SCHEIBENREIF: Drones are essentially flying cameras. Some people consider that a disturbance and there are some privacy concerns, understandably. But for organizations like UNICEF, and in a development context, this is very helpful.

MICHAEL SCHEIBENREIF: Right. And then we have software that can stitch together all those images and create what we call an orthomosaic, or orthophoto — a composite image that adjusts for camera angle and other factors to form a very detailed and highly accurate representation of the terrain below. Like the satellite images in Google Maps, only with way higher resolution.

In early 2018, Malawi's capital city, Lilongwe, was hit by a major cholera outbreak. UNICEF used drones to identify potential sources of contamination to help stop the disease from spreading.

Impressive! So what do you use these orthomosaics for?

MICHAEL SCHEIBENREIF: They can help us determine which specific areas within a country are most vulnerable to flooding, to name one example. While the drones are taking pictures, they are also measuring the distance between points, and from that you get a 3D model of a particular area. Then we can see how flooding will affect certain neighborhoods — who will be underwater first, and who needs to get out first. We can estimate the number of hours or days before a flood will reach you, and where it will go.

So drones are great for what emergency response teams like to call "situational awareness."

MICHAEL SCHEIBENREIF: Yes. Recently, we were flying drones over Malawi’s southern flood-prone region, to provide live feeds to first responders, so they would know where the flooding was happening and where they should go first to assist those affected.

That is very cool.

MICHAEL SCHEIBENREIF: There's something else that's cool, and here's where things get a bit technical. We are working on linking that imagery data with artificial intelligence (AI). After the 2010 earthquake in Haiti, lots of companies and organizations flew drones to capture images to determine what had been damaged or destroyed. They shared those images on the Internet and then crowd-sourced the analytics part. You had students in the U.S. sitting and looking at every single picture and saying, 'OK, everything is fine here, here and here. Oh wait — destroyed building.' They would flag the destroyed building and upload the information so the first responders knew where to go. With AI, we should be able to speed up that process significantly, by automating it. This is the future.

How would that work?

MICHAEL SCHEIBENREIF: AI can already identify objects — a house, a latrine, a palm tree, a water point — according to their shape, color and proportions. We should be able to develop a program that "sees" damage by detecting changes to those shapes and proportions, like when a structure is leveled. The idea is that you'd go into a disaster zone, map the area, download the data and be able to see the impact immediately. Every destroyed building would be marked. You'd match that against locations of schools and hospitals, based on their GPS coordinates, and prioritize your response.

We are already using this software to create what we call vulnerability maps, and these are helping UNICEF in the fight against cholera. We can show them to government officials and other community leaders, so they can see what we're talking about when we talk about what puts a particular neighborhood at risk. Maybe there aren't enough latrines. Cholera thrives in areas that lack proper sanitation and hygiene. The maps get everyone on the same page, and they help guide the interventions.

Can those same mapping capabilities be used to help subsistence farmers?

MICHAEL SCHEIBENREIF: Yes. In fact, we had some faculty members from Kyoto University in Japan come to Malawi recently to map agricultural lands and collect data on soil quality. They were seeing if the imagery and mapping capabilities of the UAVs could help gauge the suitability of certain areas for planting crops other than maize. They want to help the farmers move away from monoculture, which is unsustainable.

Why is it important that everything that is being tried and tested in the corridor remain open source and open data — in keeping with UNICEF Innovation Principles?

MICHAEL SCHEIBENREIF: Everything that's done in the drone testing corridor needs to be shared afterward. Everyone who comes to work with us in Malawi must be willing to share their expertise with local entrepreneurs. They must be willing and able to potentially deliver the service they're testing, not only in Malawi but in other countries in SubSaharan Africa or Southeast Asia. This is not about helping companies turn a profit. It's about advancing a technology that has the potential to do great things for global health and development.

Read about the recent deployment of an unmanned traffic management (UTM) system in the UNICEF drone testing corridor in Kasungu — an important step toward advancing the use of drones in humanitarian work.

Read more about the UNICEF Office of Innovation and how it supports the development of promising new technologies and tools for saving and protecting young lives.

Top photo: UNICEF Drone Corridor Lead Michael Scheibenreif, far left, with a team of drone designers and builders who participated in a successful test flight in Malawi in November 2017. © UNICEF