UNICEF Ramps Up Humanitarian Assistance to Children in Venezuela

As Venezuela's economic and political crisis continues, the nation's most vulnerable citizens are paying the price: 3.2 million children — one in three — growing up in Venezuela now require humanitarian assistance. "Children in Venezuela need help accessing basic nutrition, health and education services, according to preliminary United Nations estimates," said UNICEF Director of Communications Paloma Escudero, who just returned from a three-day trip to the country. "We are barely scratching the surface.

"Millions of children need to be immunized, go to school, drink safe water and feel protected. We have plans in place to further scale up our response, but we need increased flexible funding that would allow us to reach the children in need with the services they need." UNICEF has strengthened its presence on the ground, with offices close to the borders with Colombia and Brazil, making it one of the agencies with the biggest operational footprint in the country. 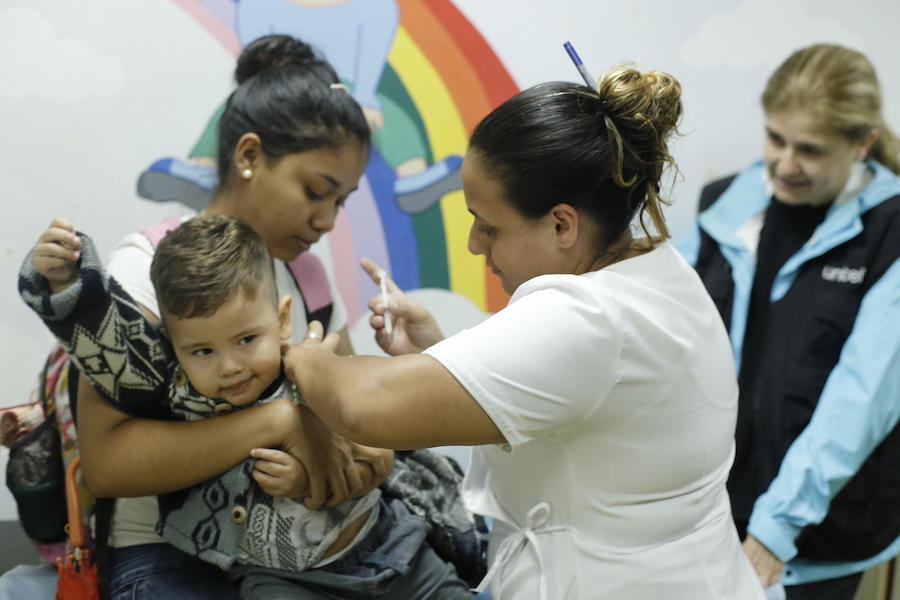 IMMUNIZATION Above, a child is vaccinated against yellow fever at a UNICEF-supported health center in las Minas de Baruta, Caracas on June 5, 2019. This hospital is one of many health facilities that UNICEF supports across Venezuela. The recent shipments of health supplies raise to nearly 200 tons UNICEF's humanitarian assistance in the country in the past year. Supplies including vaccines, midwifery kits, antibiotics and malaria treatment were distributed in 25 hospitals in the most affected states of Caracas, Miranda, Zulia, Bolivar and Táchira. © UNICEF/UN0318597/Velasquez 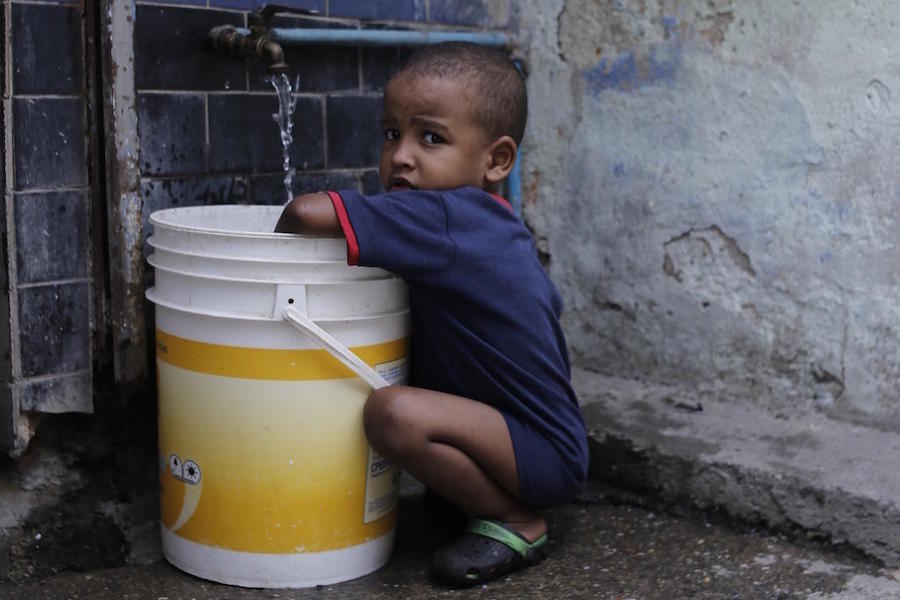 SAFE WATER A child collects water in Petare, one of the most economically fragile neighborhoods in Caracas. UNICEF delivered safe drinking water to 400,000 people in Venezuela in the first half of 2019, and provided an additional 25,300 people with water, sanitation and hygiene services in health centers, schools, learning centers and Child-Friendly Spaces. © UNICEF/UN0318573/Velasquez NUTRITION Hyperinflation and food shortages have left many children in Venezuela malnourished. Since 2018, UNICEF has provided health and nutritional supplies to more than 350,000 children and women in agreement with the Government and with the support of civil society partners. Above, at a school in Petare on the outskirts of Caracas, UNICEF Director of Communication Paloma Escudero and a health worker unpack Ready-to-Use Therapeutic Food for distribution to children suffering from malnutrition. © UNICEF/UN0318539/Velasquez COUNSELING UNICEF supports a network of child protection centers in Caracas, where children can go to play and receive counseling. Activities at the center, including sports and art therapy, are part of the psychosocial support services UNICEF provides for the most vulnerable children in Barrio Union, Petare, on the outskirts of the city. So far this year, UNICEF has reached nearly 10,000 children and young people affected by the current economic crisis with psychosocial support. Above, Naibeth, 13 (center) chats with UNICEF staff on her way to one of the centers. © UNICEF/UN0318563/Velasquez 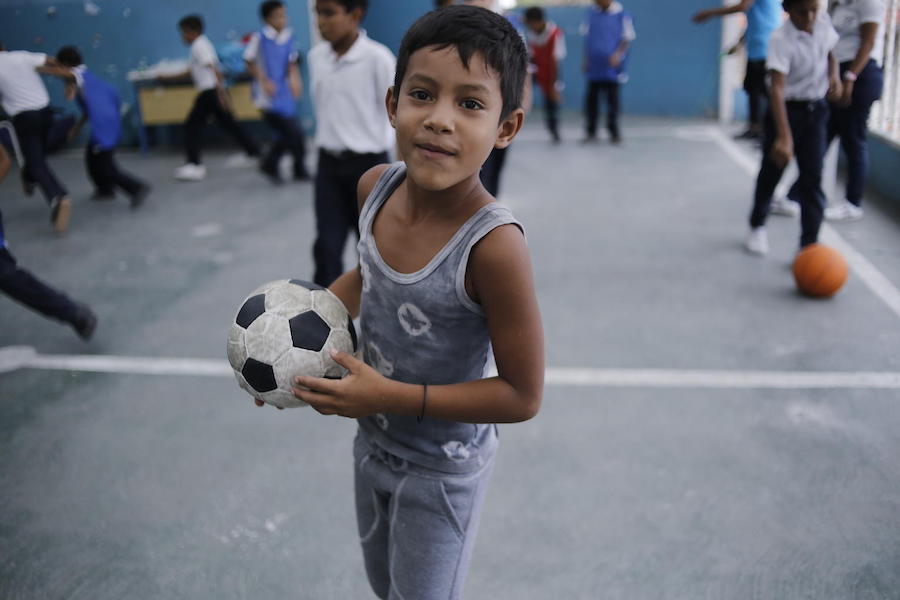 HEALTH Crippled by medicine and gas shortages, medical centers across Venezuela are functioning at minimum capacity. Many doctors and nurses have left the country. In response to repeated power outages, UNICEF provided emergency generators to ensure continued electricity for pediatric care, delivery rooms and vaccine cold storage to major hospitals. Above, children under age 5 and pregnant women wait to be immunized against yellow fever at the Urban Ambulatory Jose Maria Vargas, a UNICEF-supported health center in las Minas de Baruta, Caracas. © UNICEF/UN0318586/Velasquez

"People I spoke to painted a very grim picture of the health situation in the country," said Escudero. "For a country that made remarkable progress for decades on the quality of its health care, this is quite dramatic.

"UNICEF has been working in Venezuela for almost 30 years. As the country grapples with the impact of a devastating economic and political crisis, we will continue to provides its most vulnerable children, wherever they are, with the humanitarian support they need. Children's needs must always remain above politics."

A staggering 4 million people have now fled Venezuela, according to the International Organization for Migration (IOM) and UN Refugee Agency (UNHCR). Most are being hosted in Latin America; more than half are in Colombia and Peru. Learn more about some of the ways UNICEF is helping Venezuelan children living in Colombia, Peru, Brazil, and Ecuador.