UNICEF Is Helping Venezuelan Children Start Over in Peru

Economic and social collapse has separated many Venezuelan children from family and dreams. With help, they can reconnect with both.

TUMBES, Peru — Cristopher, 16, has always wanted to travel the world and learn about new countries – especially their food. He wants to be a chef one day. But like so many migrating Venezuelan children, his dreams are on hold as he makes the journey to Peru to start a new life.

“I didn’t even get to say goodbye to many of my friends,” Cristopher says as he waits with his mother at the Ecuadorian border with Peru for the vaccinations they’ll need to enter the country.

Why are Venezuelans leaving the country?

Spiralling inflation and a dramatic recession have made life unbearable for many in Venezuela. Hunger, social unrest and lack of basic medical care are forcing many out of the country, fueling the largest migratory crisis in the hemisphere.

On average, 5,500 people leave Venezuela every day. Most end up in South America's capital cities, but host communities in every country in Latin America and the Caribbean have felt the impact. A December 2018 report from the United Nations Refugee Agency and the International Organization for Migration estimates that at least 2 million Venezuelans will flee their country in 2019, bringing the total number of Venezuelans living abroad to at least 5.3 million by the end of the year.

Cristopher's dad and sister moved to Peru months ago. He's excited about reuniting with his family, but apprehensive about how he’ll be treated in his new home, especially after some of the stories he’s heard about the response to migrants.

His concerns are not unfounded. In a survey conducted by the International Organization for Migration and UNICEF, 46 percent of Venezuelan migrants who entered Peru through the border city of Tumbes and had stayed at least 30 days in cities in Colombia and Ecuador along the way, reported experiencing xenophobia and discrimination.

"I hope they treat me well, with the respect I always give to others. At one time, my country welcomed people from around the world. Now that we are migrants, I hope we are also welcomed," he says. A Venezuelan child looks at drawings in a Child-Friendly Space set up by UNICEF and Plan International in Tumbes, on Peru's northern border with Ecuador. © UNICEF/UN0267798/Mendívil

Cristopher is one of hundreds of Venezuelan children who have passed through the "Happiness Plan" tent, a Child-Friendly Space set up by UNICEF and implementing partner Plan International. The tent is filled with board games, books and crayons, and staffed with professionals who specialize in providing psychosocial support.

Ariana, 12, and her younger brother have also visited the tent. Ariana says that one day she'd like to be a singer and dancer — maybe as famous as pop star Ariana Grande. "I registered at a famous dance school in Venezuela," the 12-year-old Ariana says. "The dancers from there go on TV. I used to dream of dancing with them on one of the shows, but I had to come here and won't be able to do it now."

Ariana says she has mixed feelings about coming to Peru. She says she is sad to be so far away from her dad, who is still in Venezuela, but she knows how happy her little brother and mother will be to be reunited with her stepfather in Peru. They are heading to Cañete, a province near Lima by the Pacific Ocean.

At least 31,000 Venezuelan students have registered for school in Peru, and more are expected

Ariana says she is nervous about starting at a new school. "I'm always the tallest in my class," she says. "Everyone thinks I'm in university. If they drop me down a grade, I'll be with kids even smaller than me."

According to Peru's Ministry of Education, at least 31,000 Venezuelan students have formally registered in schools, mostly in Lima. With UNICEF's support, education authorities in Lima are preparing for an expected increase in enrollment of Venezuelan students when the new school year starts in March.

In the meantime, Ariana says she still loves singing and dancing, but she isn't sure yet about the music of her new home. 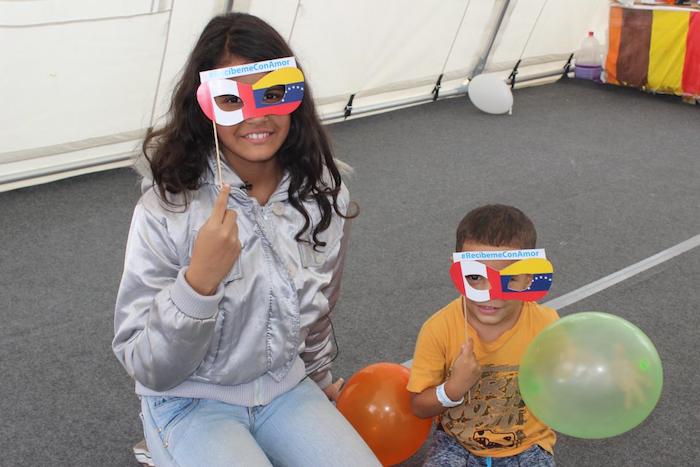 Ariana, 12, plays with her little brother in a UNICEF "Happiness Plan" tent in Peru. Their masks say, "Receive me with love." © ©UNICEF Perú/2018

Hoping for a brighter future, missing family left behind

Eight-year-old Jesús walked along muddy paths and was carried over a river on the shoulders of a stranger on his way to Peru. He feels conflicting emotions about his journey. "I'm happy because I'm going to see my mom and my older sister," he says. "But I'm a little sad because my grandfather, uncle, cousins and friends are still in Venezuela."

Jesús's mother, Angie, was waiting for him in Peru at the end of his torturous eight-day journey. She was ecstatic to see him again. "It was hard to leave him, but I didn't have any other option," she says. "There were days when I couldn't send my son to school because he didn't have any breakfast. There was only enough food for lunch.

"I thought to myself: I'm with my son, but I can't meet either of our needs. Better to go look for other opportunities so that he doesn't have to go without. That's what I did and finally I have him here with me."

Jesús says that while many of his friends are leaving Venezuela to come to Peru, he isn't sure where they will end up. If he is lucky, he might bump into one of them on a street in Lima, where 65 percent of Venezuelans entering through Tumbes say they plan to settle.

But the reality for Jesús and many other children like him is that their days of playing soccer together in Venezuela are over. Those kinds of afternoons, shared with friends, are now just memories of a childhood turned upside-down.

UNICEF and partners are working tirelessly in Venezuela, Peru, Syria, Yemen, South Sudan, Bangladesh and around the world to save and protect children. With a presence in 190 countries and territories, UNICEF has helped save more children's lives than any other humanitarian organization in the world.

Top photo: Newly arrived Venezuelan children are welcome at Child-Friendly Spaces set up by UNICEF and implementing partner Plan International, like this one in Tumbes, Peru. © UNICEF/UN0267800/Mendívil