"My Friends Were in Class, But I Was Sleeping on Cardboard"

A teenager & her family left Venezuela for Brazil. UNICEF learning spaces are making the transition to a new education system less daunting.

BOA VISTA, BRAZIL — Ronneilys remembers working hard at school. But when the time came for classes to start last year, she wasn't able to join her friends at school in Venezuela. She was living in front of a bus station in Brazil; her family was homeless.

"I saw pictures of my friends online wearing their uniforms and studying and [hanging out together]," says the 15-year-old. "But I was living on the street."

Ronneilys's journey from her hometown in northern Venezuela began in August 2018, when the situation in the country prompted her and her two brothers to pack their bags and travel to Brazil to be with their mother. An estimated 1.1 million children will need protection and access to basic services across Latin America and the Caribbean in 2019 as a result of the Venezuelan migrant crisis.

Ronneilys is one of an estimated 1.1 million children in need of protection and services as a result of the Venezuelan migrant crisis

Ronneilys says she grew up in a loving home with her maternal grandparents and had some good memories — even if she only had a few personal possessions — to take with her. She had never actually lived with her mother, and her father passed away before she was born. But after she and her brothers heard that their mother, who had moved to the city of Boa Vista in the northern Brazilian state of Roraima eight months earlier, had found a job and could afford the rent for a small house, the time felt right to join her.

It was the first time in my life I had to live on the street.

A month later, everything changed.

Her mother had lost her job. With no money, the familiy ended up homeless, sleeping on cardboard in front of the city's bus station.

"It was the first time in my life I had to live on the street," Ronneilys recalls. She says they were forced to ask people for food — and to suffer the indignity of having sand thrown at them as they slept.

"People would drive by at dawn and shout at us to go back to Venezuela," Ronneilys says. "It was the most difficult period of my life." 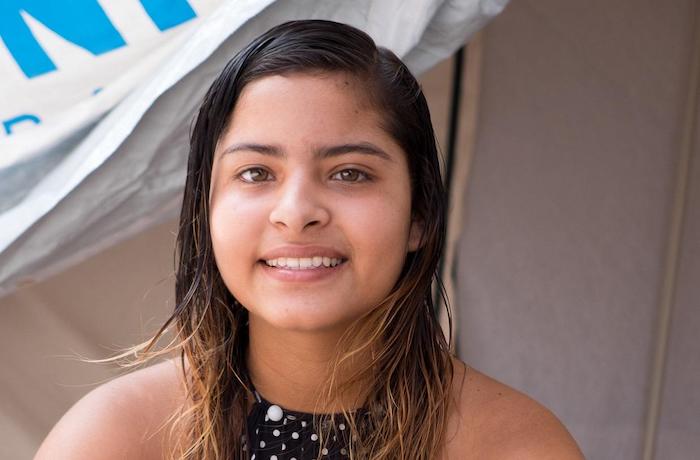 Rising uncertainty in Venezuela prompted Ronneilys, 15, and her brothers to join their mother in Boa Vista, Brazil. But after her mother lost her job, the family ended up sleeping on cardboard outside the city's bus station. A UNICEF learning space gave Ronneilys a safe haven and helped her prepare to enter the Brazilian school system.  © UNICEF/ Inaê Brandão

But after almost two months, the family's fortunes started to change.

In late September, the family was offered a tent at the Jardim Floresta immigration shelter in Boa Vista. During her two-month stay at the shelter, Ronneilys joined a UNICEF learning space, where migrant children and adolescents from Venezuela can study, play and get reaquainted with a normal school routine to help them prepare for entry into the regular Brazilian education system.

UNICEF has established 12 learning spaces, operated by the NGO Fraternidade Internacional, in the state of Roraima, the entry point for most Venezuelans who are migrating from their home country.

At the learning spaces, which had registered attendance for more than 3,210 children by March 2019, Brazilian and Venezuelan teachers lead classes in Portuguese, Spanish and math, among other subjects. Counselors are also on hand to provide support and look for any signs of abuse to ensure suspected victims are quickly referred to child protection units.

"It was a safe place where I knew that nothing would happen to me and that I wouldn't feel humiliated. It had a mattress to sleep on, and we weren't in the cold anymore," Ronneilys says. "We had food every day, and we didn't need to ask for it. Even better, I was studying again."

We had food every day, and we didn't need to ask for it. Even better, I was studying again.

But Ronneilys's journey wasn't over. With assistance made available by Brazil's government, her mother found a new job in São José, Santa Catarina State. The family once again packed up their few belongings and headed south.

Now, around 3,100 miles away from the shelter in Boa Vista, Ronneilys says she misses her grandparents more than ever, but she feels more confident about her situation. She's ready to get back to school — and to continue pursuing her childhood dream of becoming a dentist.

"It's not easy," she says, "But I believe happy days are ahead."

Top photo: Rising uncertainty in Venezuela is prompting many to leave for other countries in the region. Here, a group of Venezuelans cross the border near Cucuta, Colombia in April 2019. © UNICEF/UN0303650/Arcos