For Many in Venezuela, Life Has Become Unbearable

UNICEF is working with partners to support and protect children and families affected by Venezuela's profound economic and social crisis.

Imagine the price of a cup of coffee doubling with every weekly paycheck. Picture anxious shoppers lining up to enter grocery stores and pharmacies only to find almost empty shelves. How can parents feed their children? How can they find basic medicines when their children are sick?

Spiraling hyperinflation and a dramatic recession have left many reeling

For the past four years, spiraling hyperinflation and a dramatic recession have made life unbearable for more and more Venezuelans. Shortages of food, medicine and basic goods are commonplace. Nearly 12 percent of the population is undernourished, according to the latest United Nations report on world food security and nutrition.

Venezuela has the world's highest inflation, surging to 1,000,000 percent this year. Economists are drawing comparisons to Germany in 1923 and Zimbabwe in the late 2000s. The deepening economic and social crisis has forced 3 million Venezuelans out of the country since 2015. Exact figures are unknown, but that number has been rising steadily in recent months.

Shortages of food, medicine and basic goods are commonplace In Rumichaca on the border between Ecuador and Colombia in August 2018, hundreds of Venezuelans sleep in the streets while waiting their turn to stamp their passports and proceed on their journey. © UNICEF/UN0247696/Arcos

An estimated 2.6 million Venezuelans are currently living in countries within Latin America and the Caribbean, including Colombia, Peru, Ecuador, Argentina, Chile, Panama and Brazil. UNICEF has launched a regional response to support the growing number of children and families arriving from Venezuela, as well as children in host communities. This involves working with partners to provide safe drinking water and sanitation, education and health services.

UNICEF is also establishing temporary learning spaces for refugee and migrant children across the region as well as supporting protection and counseling services.

An estimated 2.6 million Venezuelans have left the country 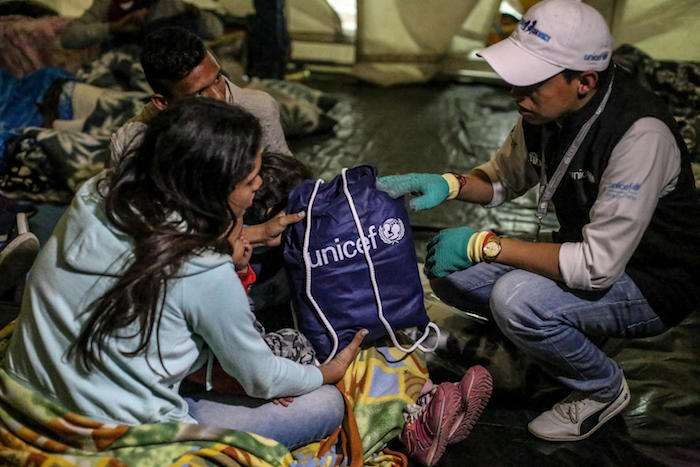 For the many vulnerable children who remain in Venezuela, UNICEF has flown in nearly 130 tons of medicines and health and nutrition supplies since August. In coordination with the National Nutrition Institute and other partners, UNICEF has so far delivered 100 tons of nutritional supplies for 150,000 children, including micronutrients, therapeutic food and deworming and water purification tablets.

Since August, UNICEF has flown nearly 130 tons of medicines and health and nutrition supplies into Venezuela 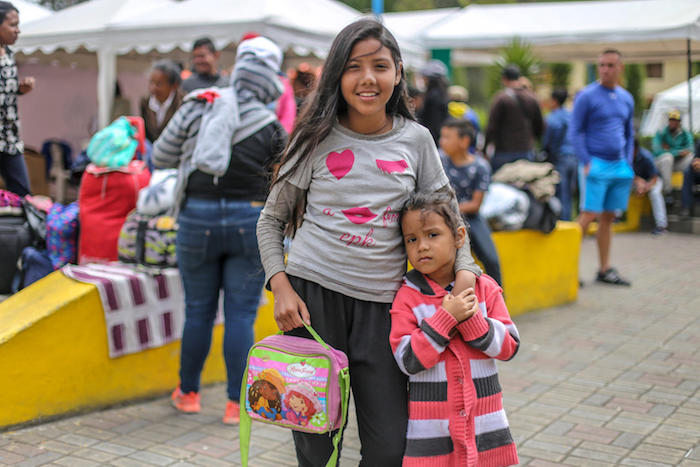 Alegna, 12, and her 4-year-old sister, Aignara, migrated with their family from Venezuela. On October 31, 2018, they waited in Rumichaca on the Ecuadorian side of the border with Colombia. © UNICEF/UN0253273/Moreno Gonzalez

As conditions deteriorate, the risk of disease outbreaks rises. Measles cases increased from 727 in 2017 to 5,525 in 2018, and a diphtheria outbreak that began in July 2016 led to 1,249 confirmed cases, mostly among children.

Working with the Ministry of Health, UNICEF has provided 30 tons of medicines and health supplies to stop the spread of infectious diseases and to treat and care for 25,000 pregnant women, 10,000 newborns in neonatal wards and more than 2,300 children living with HIV.

As conditions deteriorate, the risk of disease outbreaks rises 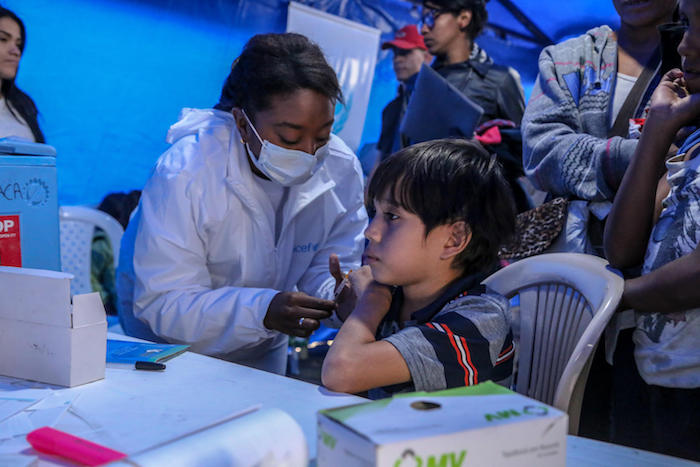 Accompanied by his mother, José David, 9, waits to be vaccinated at a UNICEF health facility in Ipiales, Colombia in October 2018. © UNICEF/UN0253232/Moreno Gonzalez

Present in Venezuela since 1991, UNICEF has strengthened work with partners over the past two years to provide vulnerable children affected by the economic crisis with support in education, health, nutrition and protection. So far this year, UNICEF has also supported the immunization of children with 2.5 million doses of measles vaccines and provided antiretrovirals for 2,334 children and antimalarial treatment for 150,000 children.

UNICEF and partners are working tirelessly in Venezuela, Syria, Yemen, South Sudan, Bangladesh and around the world to save and protect children. With a presence in 190 countries and territories, UNICEF has helped save more children's lives than any other humanitarian organization in the world.

Top photo: Mothers and children from Venezuela take shelter in a UNICEF temporary rest tent in Rumichaca on the border between Ecuador and Colombia in October 2018. © UNICEF/UN0253266/Moreno Gonzalez