A brutal military crackdown that began in August 2017 drove hundreds of thousands of ethnic Muslim Rohingya out of Myanmar. By April 2019, around 910,000 Rohingya had settled in Cox's Bazar District, in southern Bangladesh, effectively forming the world's largest refugee camp.

Why are Rohingya families unable to return home?

The long persecuted ethnic and religious minority group have lived in Myanmar for generations, but they are denied citizenship and their movement is restricted. Until conditions are in place that would allow Rohingya families to return home with basic rights — safety from violence, citizenship, free movement, health and education — they will remain in Bangladesh. Meanwhile, Rohingya children are at risk of missing out on a formal education that will give them the skills they need to develop and thrive in the future.

"This is a crisis without a quick fix that could take years to resolve unless there is a concerted effort to address its root causes," said Manuel Fontaine, UNICEF Director of Emergency Programs.

How is UNICEF helping?

UNICEF is on the ground, working with the government and partners to deliver lifesaving supplies and services to Rohingya refugees and host communities. From January to December 2018, UNICEF and partners:

What is UNICEF doing to help Rohingya refugee children in 2019?

Living conditions are difficult and sometimes dangerous, especially during Bangladesh's long monsoon and cyclone seasons. In 2019, UNICEF will continue providing services and support to Rohingya families, working to: Reach 272,000 children between the ages of 4 and 14 with formal and non-formal education programs, including early learning 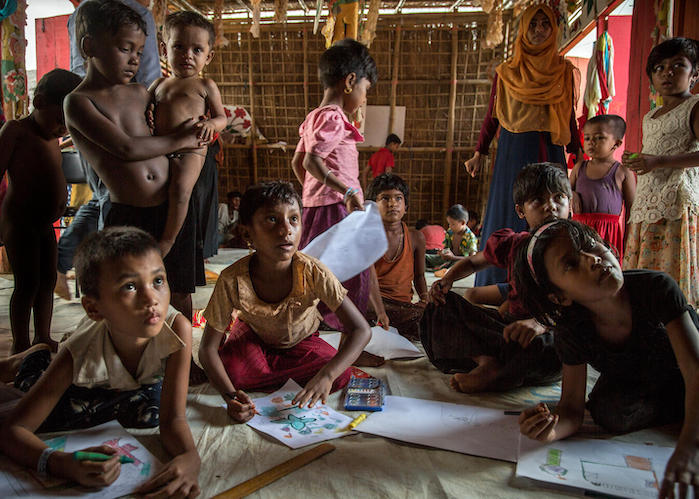 Rohingya refugee children draw at a UNICEF Child-Friendly Space in Balukali Camp 1, Bangladesh. When they first arrived, many children's drawings were filled with violent scenes of the military attacking and killing their friends and family. As they settle into life in the camp, their work contains more positive imagery.  © UNICEF/UN0235141/LeMoyne

Provide mental health and psychosocial support for 160,000 children, including adolescents 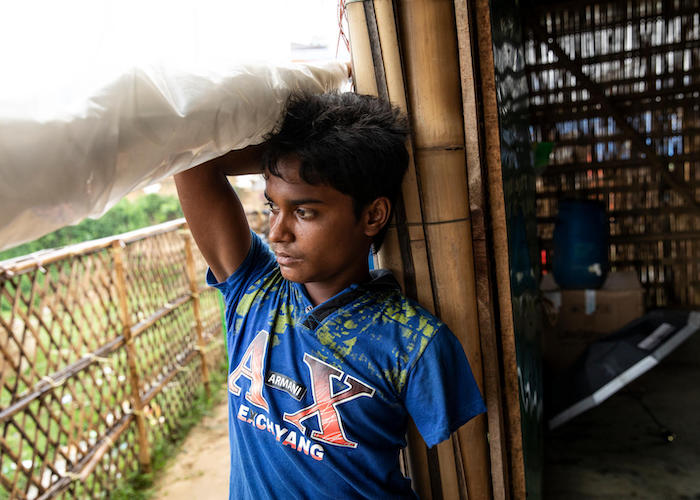 13-year-old Mohamed's arm was shot off as he ran away from his village in Myanmar, where houses were being burned down. He spent a month hiding in a forest close to the Myanmar/Bangladesh border, then made his way to Chakmarkul refugee camp in Cox's Bazar, Bangladesh. He last spoke to his parents, who remain in Myanmar, two months ago. © UNICEF/UN0231414/Brown 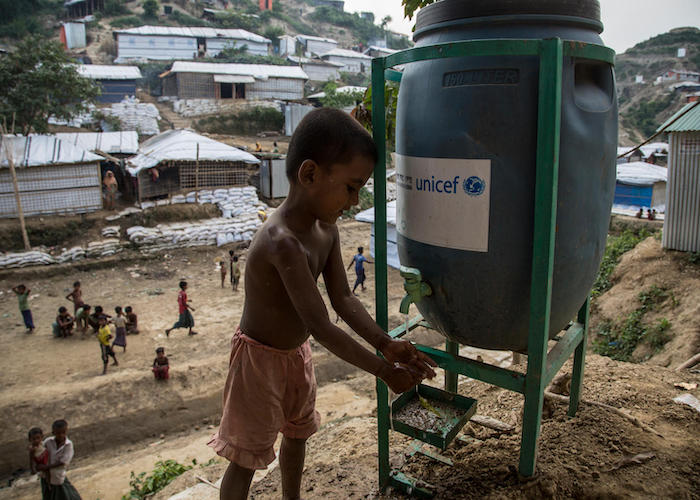 UNICEF has achieved remarkable results for children and affected populations, especially in camp settings, and strengthened its work in the region. UNICEF is requesting $152.2 million to meet the lifesaving and humanitarian-development needs of Rohingya refugees and Bangladeshi host communities, including essential nutrition, health, water & sanitation, protection and education systems and emergency preparedness.