One year ago, close to a million Rohingya people fled violence in Myanmar for Bangladesh. Now a generation of children face uncertain futures.

One year ago, the world watched in horror as hundreds of thousands of Rohingya families fled unspeakable violence in Myanmar for safety in Bangladesh. Sixty percent of those streaming across the border were children, many giving heartbreaking accounts of parents, family and friends tortured, raped and murdered.

Twelve months on, children and adults alike find it hard to shake those memories. But the challenges of daily life in the congested, often unsanitary camps of Cox’s Bazar have created a new all-consuming reality. Survival is hard. While a huge international aid effort led by the Government of Bangladesh has managed to provide the Rohingya basic services and prevent major disease outbreaks, roughly one million men, women and children live a precarious existence.

In the Child Alert published today, Futures in the Balance: Building Hope for a Generation of Rohingya Children, UNICEF warns that children living in Cox’s Bazar District face a bleak future, with few opportunities to learn or thrive — and no idea when they might return home.

Here are five facts about life in the camps and how UNICEF is working to save a generation of Rohingya children:

1. What passes for normal life could easily be swept away In the congested settlements of Cox's Bazar, Rohingya families live on the edge — some, like 60 year-old Dulu and her husband Salamat, quite literally. Outside their door, only a narrow ledge stands between them and a 50-meter deep drop into a gully crowded with other housing. Now that monsoon season is here, the simple bamboo-and-plastic shelter they call home feels even more precarious.

During June's heavy rains, a thin crack opened in the floor, but Dulu and her family — including two young grandchildren — are staying put:  “We won’t go,” says Dulu firmly. “If we are going to die (in Bangladesh), we will die in this place.”

2. Roads, infrastructure and shops have sprung up, but civilization is fragile After one year, the camps appear more settled, with roads, markets, cash-operated small businesses and solar-powered street lamps. Nevertheless, significant gender-based and domestic violence has been reported inside the camp. Outside its borders, sexual exploitation, trafficking, and child labor are significant threats for Rohingya children — particularly for girls.

In order to make this chaotic, largely lawless place safe for children, UNICEF and partners have set up 136 child-friendly spaces, where children can safely play and heal. A network of clubs has also been established, where some 60,000 Rohingya and Bangladeshi teens gather to socialize and develop life skills. They also get a chance to learn about their rights, sexual and reproductive health and think about what — beyond marriage — the future could hold.

3. Girls are especially at risk According to 12-year-old Samira life in the camps is hard on girls. “When we first arrived in Bangladesh, we feared kidnappers. The shelters were flimsier back then and people could easily break in and steal things, even children." Samira feels safer now and has developed a strong group of friends — 15 girls she met at the UNICEF child-friendly space — but she feels a bleaker future closing in.

Once Rohingya girls begin to menstruate, they are typically confined to their homes. Back in Myanmar that might have been a compound, but in the crowded camps, home is likely to be one small space. “Bangladeshi girls are allowed to go to school and move around, by wearing a (hijab)," says Samira. "But we will be kept inside the house and then we get married."

Many families believe that Islamic law sanctions marriage of children as young as 13 or 14, which for girls dashes any dream they might have had of getting an education.

Speaking out at a UNICEF-supported clubs for teens, 14-year-old Ashadia clearly spelled out the cost to girls: “A decent education is the best way for girls to improve their lives. With education, we can challenge some of the things men tell us. We can be who we want to be.”

4. The vast majority of children under 14 are at the preschool level of education 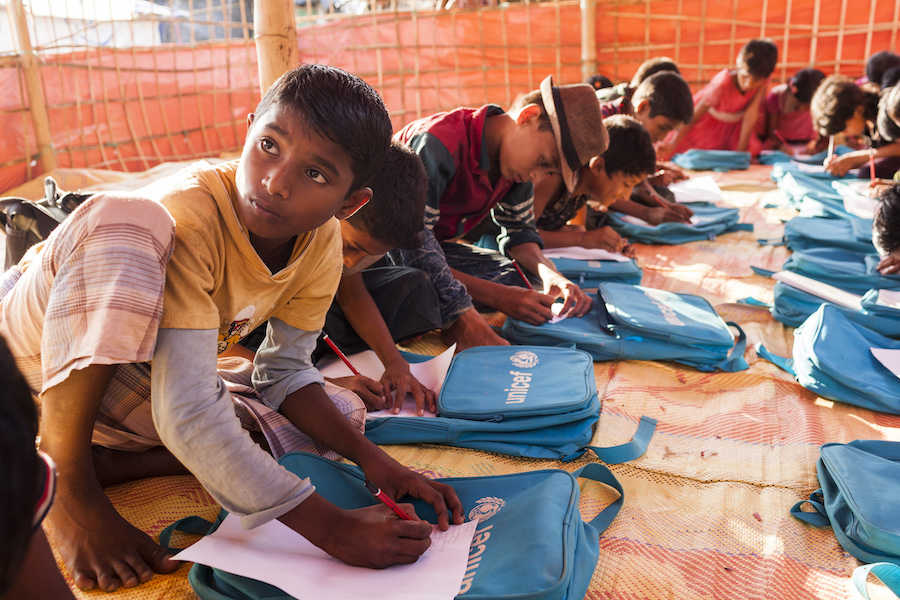 Getting 381,000 refugee children — many of whom had never been to school — learning has been a huge challenge for UNICEF and its education partners.

Hundreds of learning centers were rapidly set up to serve children under the age of 14, many of whom had never gone to school before. As of July 2018, 140,000 Rohingya children are now receiving education of some kind. 1,200 learning centers have been established, and well over 3,000 Bangladeshi and Myanmarese instructors trained.

The challenges have been formidable. Although the children are very enthusiastic about learning, a standard curriculum has yet to be established. “We succeeded in mushrooming the learning centers at a rapid pace,” says acting UNICEF Chief of Education, Bibek Sharma Poudyal. “Now we need to improve the quality of the learning they are offered, and expand it to provide for the requirements of adolescents.”

That can't happen soon enough for 13-year-old Mohamed Faisal. “I see the schools here where the younger children go, but there is nothing for boys like me,” says Mohamed. “I feel very unhappy that I am unable to study here.”

Now in development is a plan to increase children's learning time from two hours to four and eventually offer classes up to the eighth grade in English, Burmese and local Rohingya dialects. For adolescents, pre-primary and primary level instruction in English, Burmese, mathematics, science and life skills is also planned with a focus upon helping them deal with the risks children their age encounter in the camp environment.

“If we don’t make the investment in education now, we face the very real danger of seeing a ‘lost generation’ of Rohingya children, children who lack the skills they need to deal with their current situation, and who will be incapable of contributing to their society whenever they are able to return to Myanmar,” says UNICEF Bangladesh Representative Edouard Beigbeder.

5. The children of local Bangladesh communities need help too 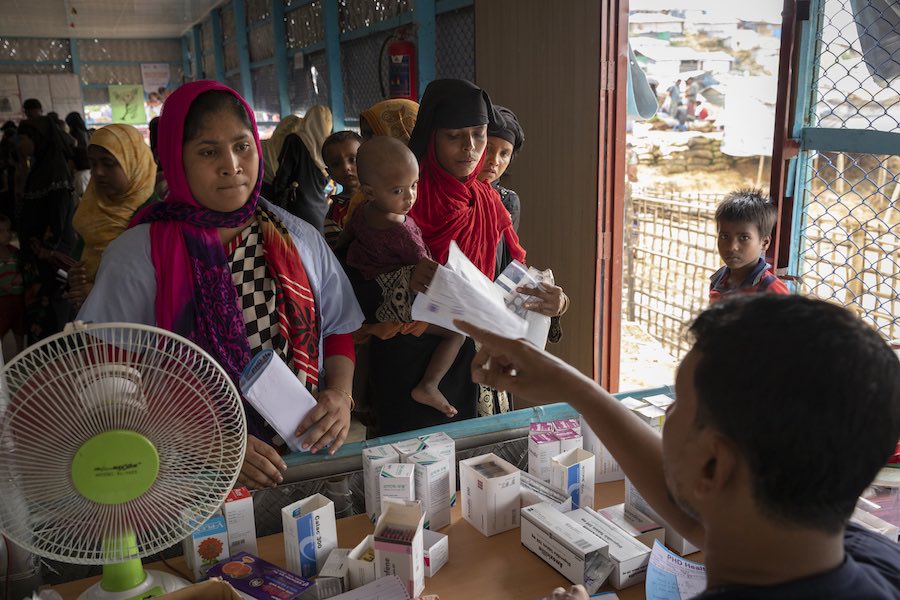 When refugees began arriving in Bangladesh last August, it was the Bangladeshi people and the local authorities of Cox’s Bazar — where one-third of the residents live below the poverty line — who met them with open arms. But as the area's population quadrupled in a matter of months, the strain on public services only grew.

“The host community has paid a heavy price,” says Jean Metenier, Chief of UNICEF Cox’s Bazar Field Office. “This is why, across all UNICEF programs, we are now redoubling our efforts to ensure that as a minimum, Bangladeshi children are not negatively affected as a result of the generosity they have shown.”

Health centers like the one above and immunization campaigns have been key to preventing the major public health crises that health experts have feared. “Given the physical condition the refugees were in, and the lack of vaccination coverage they had, we expected worse outbreaks than have occurred so far,” says UNICEF Health Specialist Yulia Widiati.

To build on that success, a routine immunization system benefiting all the region's children is the next step. “We have a longstanding partnership with local health authorities, and we need to strengthen that, so that refugees and host community children alike see the benefit of the improved maternal, newborn, child and adolescent health services that are being put in place,” says Widiati. 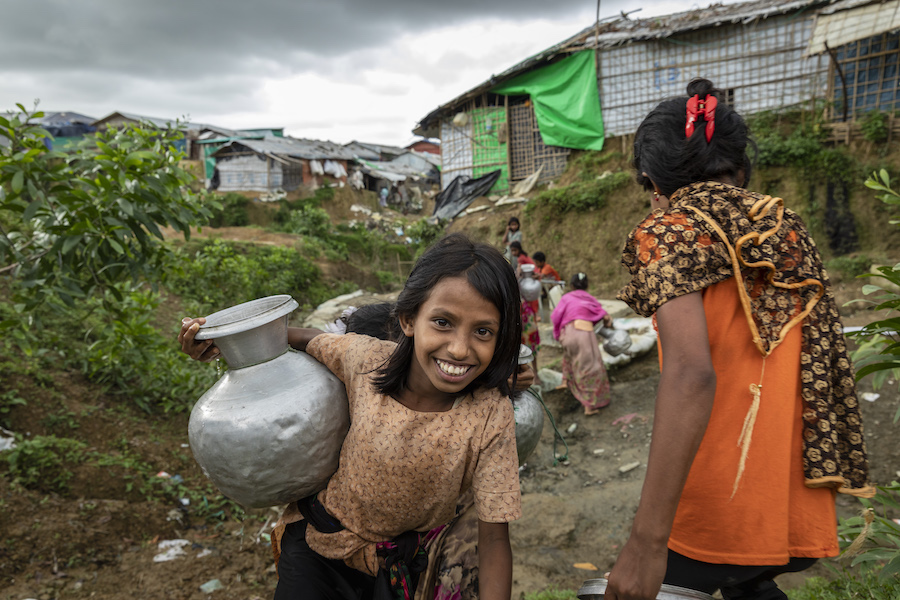 UNICEF and partners are also working to ensure that host communities aren't harmed by the massive demand for safe water.

For now, two water treatment plants and 8,000 tube wells are providing camp residents with water. Maintaining those systems and repairing out-of-commission wells that were poorly constructed in the early weeks of the crisis is a huge challenge, says Salih. But UNICEF and partners are making sure to keep the Bangladesh communities' needs central to future plans.

With four deep boreholes now in progress with the local Department of Public Health Engineering, UNICEF and partners are working toward providing safe water and sanitation to 200,000 Bangladeshi citizens and their 150,000 refugee neighbors by year's end.