World leaders are headed to Glasgow, Scotland for COP26 — the 26th Conference of the Parties to the 1992 United Nations Framework Convention on Climate Change — to confront the worsening climate crisis. UNICEF will be there, urging nations and critical partners to accelerate meaningful action on behalf of the world's children. Here's what's on the agenda, and what's at stake for future generations.

COP26 kicks off Sunday, the start of what many hope will mark a turning point in the current climate crisis — a chance for countries to join together and jumpstart action needed to fulfill the promises made under the Paris Agreement.

The much-anticipated climate summit, to be held in Glasgow Oct. 31 through Nov. 12, is also an important opportunity for UNICEF and other champions for children to push governments to elevate the role of young people in driving climate solutions and to honor their priorities for action. 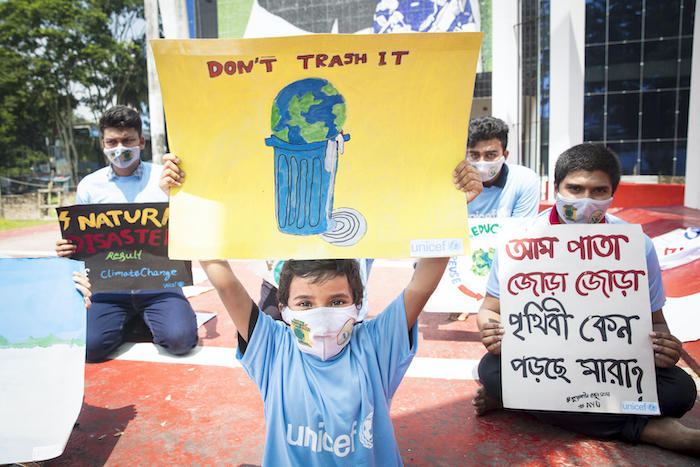 A boy joins other young activists for a Global Climate Strike event in Barishal, Bangladesh organized by the Alliance for Youth and Development with support from UNICEF. More than 200 boys and girls from different youth organizations participated. © UNICEF/UN0540782/Mawa

There's a lot at stake. In many parts of the world, people are facing multiple climate-related impacts such as severe drought and flooding, air pollution and water scarcity, leaving their children vulnerable to malnutrition and disease.

Almost every child on Earth is exposed to at least one of these climate and environmental hazards.

But climate change and related crises do not affect everyone equally. Children suffer more than adults, and those in the poorest communities bear the biggest burdens.

Nearly half of the world's children — roughly 1 billion — live in one of 33 countries classified as "extremely high risk" due to these climate change impacts. 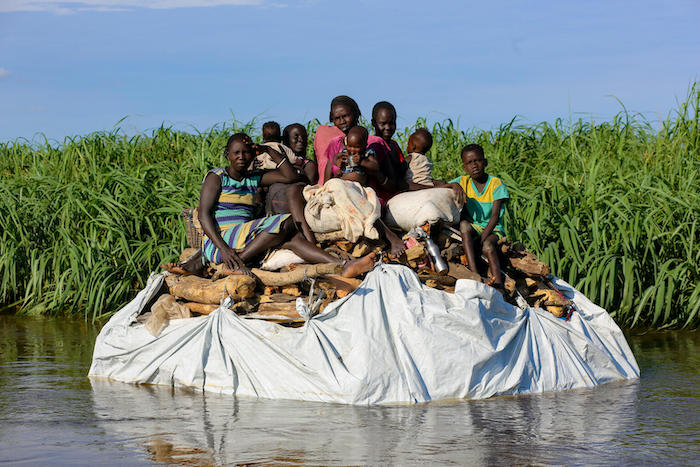 A family displaced by flooding floats down the Sobat River in South Sudan in search of higher ground. They pack what they can manage. This is an increasingly common sight along the Sobat Corridor from Malakal Town in Upper Nile State to the Ethiopian border as more and more people are forced to flee their homes to live in abandoned buildings or to sleep out in the open. The impacts of climate change have grown worse in South Sudan following three years of severe flooding, which is contributing to food insecurity and high rates of malnutrition. © UNICEF/UN0540638/Obel

Without urgent action, climate-related threats to health, safety and future well-being will only intensify

For UNICEF, COP26 is a chance to secure stronger commitments from countries and other key partners to advance three key objectives: "I fight to maintain a dignified future on this planet for us and future generations," writes 21-year-old Ariana, a climate action activist from Uruguay and contributor to the Voices of Youth blog sponsored by UNICEF. UNICEF has accredited nearly 50 young people from around the world to participate in COP26 and offers information, tools and resources to support their mission. © UNICEF/UN0411235

For UNICEF, all three of these goals are crucial for achieving a safe, sustainable and water-secure world for children.

UNICEF's strategies for mitigating impacts and helping communities adapt to climate change are closely intertwined with many longstanding pillars of UNICEF's mission. UNICEF works with partners around the world to identify and implement affordable, scalable solutions to help curb the impact of climate change on the lives of children — and to adapt to new realities.

Take water, sanitation and hygiene (WASH) — a core UNICEF program area for decades. The climate crisis is limiting children’s access to safe water and is contributing to increasing water scarcity. When a child lacks sufficient access to clean water, it threatens every aspect of that child’s life — their survival and their future. UNICEF’s WASH program is already using innovative solutions, like solar-powered water pumps and treatment systems and rainwater harvesting, to reduce these impacts.

Education is another area where climate concerns are driving intervention strategies. UNICEF is working with partners to bring climate education to more schools and to make education systems more resilient to climate change impacts. 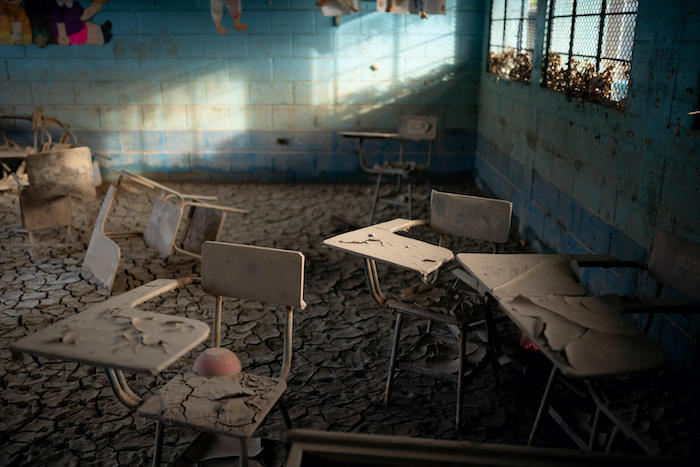 When hurricanes Eta and Iota hit Guatemala in 2020, the Motagua River overflowed, flooding schools and depositing mud inside classrooms. Desks inside a school in El Tenedor were still covered months later, where the back-to-back storms had damaged a perimeter wall. UNICEF is working with partners to make schools and education systems more resilient to the effects of climate change. © UNICEF/UN0403886/Billy/AFP-Services

Adapting to climate change and building resilience is an important and integral part of UNICEF's response to natural disasters. UNICEF responds to hundreds of emergencies every year, bringing relief to children and families who are displaced and otherwise affected by hurricanes and other extreme weather events — which are only growing more frequent, more intense and more destructive as a result of climate change. 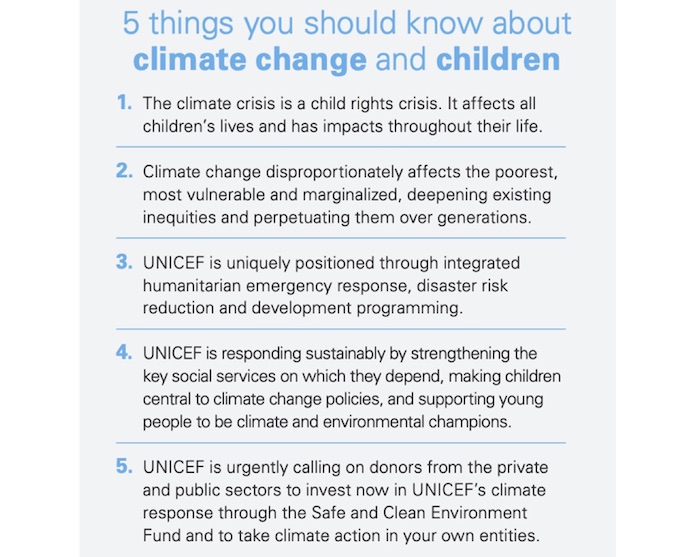 The effects of climate change in Central America — massive floods swallowing entire villages, destroying livelihoods and pushing more and more people into extreme poverty — has been a major factor in children and families seeking to migrate north to Mexico and to the U.S. In 2020 alone, climate-related disasters displaced 30 million people worldwide — three times as many as were displaced by violence and conflict.

UNICEF and partners are looking to find ways to leverage these challenges — and turn them into opportunities to drive solutions — to turn young people who are uprooted by climate impacts into key agents of change.

What happens at COP26 will shape the lives of every child in every nation on earth — now and in the future.

"We have a very narrow window of opportunity to prevent the worst impacts of climate change," says Special Adviser to the UN Secretary-General on Climate Action, Selwin Hart. "Climate action is not something that can be delayed for 10, 20 or 30 years. We must take urgent and ambitious action now." 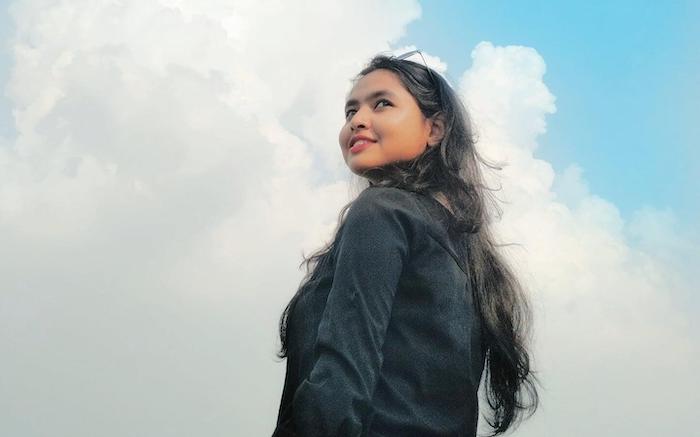 Ankita, 22, has been actively campaigning since 2019 in the hopes of creating change and shifting decision-making on the climate crisis. "Our politicians still believe that young people don’t care about politics, but now, after such a lack of leadership about our futures, the youth are rising up," she says. © UNICEF/UN0411237

Learn more about COP26 meeting agenda, schedule, side events and exhibits. The “green zone” provides details on side events open to the public.

The climate crisis is a child rights crisis — an unprecedented threat to all children and young people. Learn more about what UNICEF is doing to save and protect vulnerable children from the impacts of climate change.

Top photo: A boy in Bilwi, Nicaragua, sits on what remains of his family's home after Hurricane Iota. Storms and other extreme weather events are growing more intense and more frequent as a result of climate change. In 2020, natural disasters displaced 30 million people — three times as many as were displaced by violence and conflict. © UNICEF/UN0372377/Ocon/AFP-Services