UNICEF accelerates humanitarian relief efforts amid intensifying violence in Ethiopia's embattled Tigray region — including a rash of attacks on women and girls.

The situation remains dire, however, with social services having rapidly eroded in the five months since conflict erupted between national government troops and regional forces.

The region's health system has all but collapsed; access to safe water is dangerously limited

UNICEF Executive Director Henrietta Fore cited emerging reports of killings and sexual violence against women and children as cause for deepening concern. Over 500 rape cases have been reported in Tigray since fighting began in November 2020; the UN projects that the total is likely far higher.

With only a fraction of health facilities still operating inside Tigray — and so many others damaged, abandoned and looted — the region's health system has all but collapsed, bringing many critical services to a halt. With water systems no longer functioning, access to safe water is dangerously limited. Severe food shortages — and reports that warring groups are deliberately starving civilians — are fueling fears of famine. 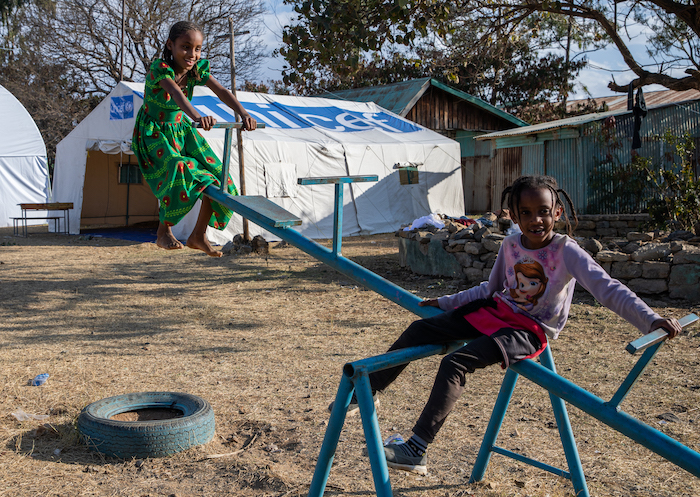 Two girls play in a Child-Friendly Space set up by UNICEF at the Meseret Primary School in Mekelle Town, one of two dozen schools in Tigray now serving as temporary shelters for those displaced by ongoing conflict in the region, mostly women and children. © UNICEF/UN0422028/Sewunet.

UNICEF and partners are rushing critical supplies to children and families

UNICEF is focusing on getting safe water and other critical supplies to those in need and working with partners to restore access to essential services as quickly as possible. So far UNICEF has shipped over 860 metric tons of emergency items to Tigray, including medicines and other medical supplies; therapeutic milk and packets of Ready-to-Use Therapeutic Food, the peanut paste used to treat severe acute malnutrition; soap and water purification tablets.

UNICEF has also dispatched a number of mobile health and nutrition teams, sending specialists into vulnerable areas to provide primary health care services and screenings and treatment for malnutrition. 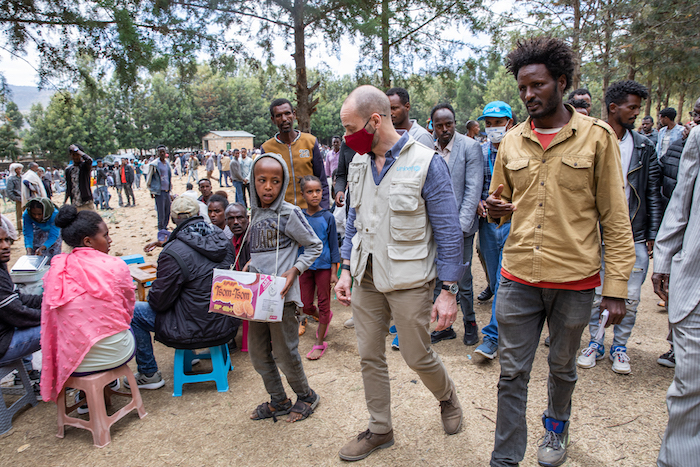 Manuel Fontaine, Director of UNICEF’s Office of Emergency Programs, center, visited a camp for internally displaced people in Adigrat Town, Tigray, on Feb. 22, 2021. "We are responding to massive and growing needs but nowhere near the scale and speed that is required,” Fontaine said. “Delivering a large-scale response is contingent upon reaching rural areas, where most of the population live, and the restoration of essential services." Conditions in displacement sites in Tigray — where the population is overwhelmingly women and children — remains extremely difficult. Malnutrition is widespread, and health services and access to safe water are dangerously limited. © UNICEF/UN0422011/Sewunet

Hundreds of thousands have been uprooted in Tigray

Hundreds of thousands of Tigrayans have been uprooted by the violence. Some have fled across the border into Sudan and are staying in refugee camps there, while others have remained internally displaced, some taking shelter in schools.

With all schools in Tigray closed since March 2020 due to COVID-19 pandemic lockdowns, It is unclear how many have since reopened to students for learning, and how many — if any — students have been able to continue with remote learning. Many schools have been damaged by fighting, while others remain occupied by armed groups.

UNICEF is supporting the reopening of schools wherever security allows, while setting up temporary learning spaces in the displacement camps and host communities, providing materials to teachers and students.

To address gender-based violence, UNICEF is working to revitalize prevention and response services in the refugee camps and displacement shelters, including case management for survivors of gender-based violence, while condemning the attacks as human rights abuses and calling for action to bring perpetrators to justice. 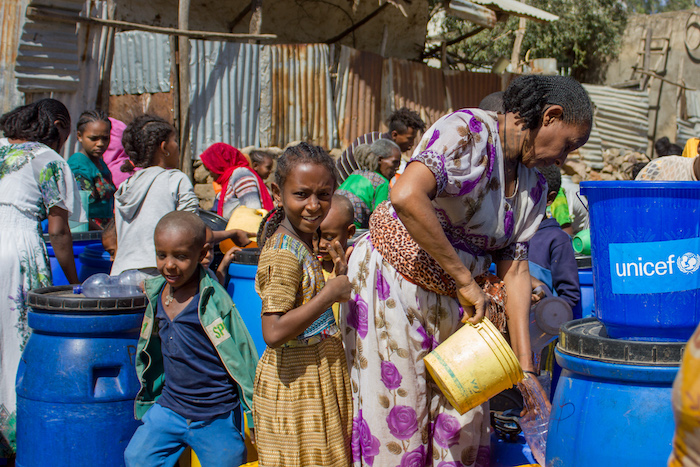 UNICEF continues to support over 425,000 people in and around Ethiopia's embattled Tigray region with safe water for drinking, cooking and personal hygiene by trucking it in or rehabilitating damaged water systems. Above, a family collects water at a distribution point outside a secondary school in Shire, now serving as a shelter for displaced families. © UNICEF/UN0413691/Leul Kinfu

While UNICEF continues to rush critical supplies to the region, stepping up its staff presence, humanitarian aid alone will not be enough to stabilize the situation.

"Monitoring, reporting and protection services for those affected must be urgently expanded to meet the growing needs of survivors," Fore said. “Parties to the conflict must ensure that children are protected from harm at all times. Basic service outlets, such as health centers and schools, must be protected and the safety and security of everyone working in and accessing those services guaranteed.”

To learn more about how UNICEF is responding to the crisis in Ethiopia's Tigray region, read UNICEF's most recent situation report.

UNICEF responds to hundreds of emergencies and disasters every year, delivering lifesaving assistance to vulnerable children and families. Help UNICEF continue this important work. Your contribution can make a difference.

Top photo: Natan, the youngest member of a family displaced by violence in Ethiopia's Tigray region, eats a high-energy biscuit. UNICEF and partners are accelerating relief efforts to meet the urgent needs of affected children and families, including addressing widespread food insecurity and rising rates of malnutrition. © UNICEF/UN0412581/Leul Kinfu