Thirteen million people across 76 countries use UNICEF's U-Report messaging tool to speak up about the issues that matter to them, and get answers to their most urgent questions.

It is August 2019 and rainy season in Nigeria. The Borno camp has pools of water scattered around, and children are kicking at the water. Their laughter ripples through the air. Community volunteers and mobilizers sit under a tent next to the camp clinic. Their phones are pulled out as they wait to share their experiences of using SMS — text messaging — to exchange information with UNICEF and partners, sending and receiving messages through U-Report, a global social messaging platform.

The first person to speak is a father of two children and an active community volunteer for U-Report. He shows his phone and says, “This program helps me get involved with the clinic. I made sure my wife, when she was pregnant, made all her visits. When the latrines were filled up, I reported it on text, and a couple of days later it was fixed. That’s when I knew more people need to join.”

Everyone claps for him. He smiles at the group, and continues, “Yes, we should all join because through this texting, we can make our community better.” Everyone cheers again. It sounds ideal, it sounds like there is a solution. Yet, it is far from the truth. We are only at the beginning. 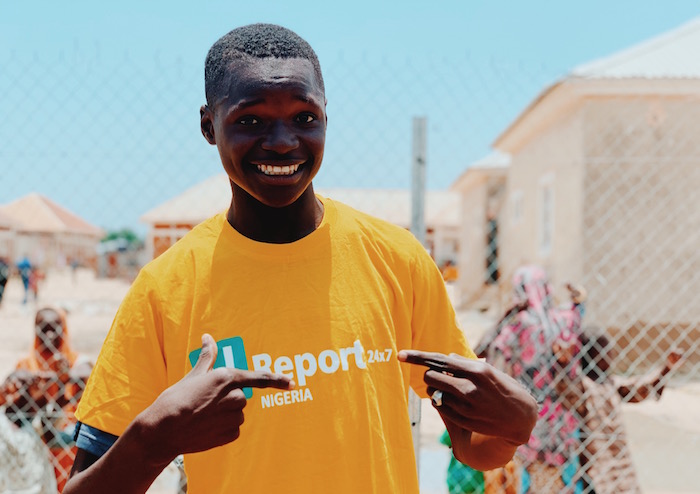 In Nigeria, young U-Reporters use the global social messaging platform to share their concerns and improve their communities. © UNICEF

Over the years, UNICEF has increasingly invested in exploring the use of information communication technologies across all work areas. Investments in digital tools like U-Report have yielded results — there are now 13 million U-Reporters across 76 countries, with a new user signing on every five seconds.

Launched in Uganda in 2011 for use via SMS (text messaging), Facebook and Twitter, U-Report continues to evolve in technical sophistication and its ability to be leveraged for the humanitarian sector’s call for a more coherent approach to information sharing and collecting. With growing success, the platform influences and measures social and behavioral change with the purpose of using people-led information to inform humanitarian decision-making processes and adhere to systems of accountability.

Creating an open dialogue between communities in need and humanitarian actors

In 2018, a team of UNICEF collaborators piloted U-Report to support humanitarian efforts in North East Nigeria’s protracted crisis. The pilot focused on internally displaced people with mobile phones across three North Eastern states. U-Report would act as a platform to reach and engage them in a two-way dialogue about their ongoing needs. The goal was to stretch as far as telecommunications connectivity reaches people, and to remove burdens of SMS costs to the users as well as complement the use of a physical comments box, one of the traditional ways of engaging with the affected population.

If people could text, the assumption was that they would be more open and more frank than they would be if asked the same questions in person. The input from affected communities was meant to directly shape how humanitarian actors respond, and in the process, commit to closing that feedback loop by communicating with communities on what was done or could not be done. The aim was to sustain a dialogue, with affected peoples leading the way and humanitarian actors being held accountable for commitments to those affected. 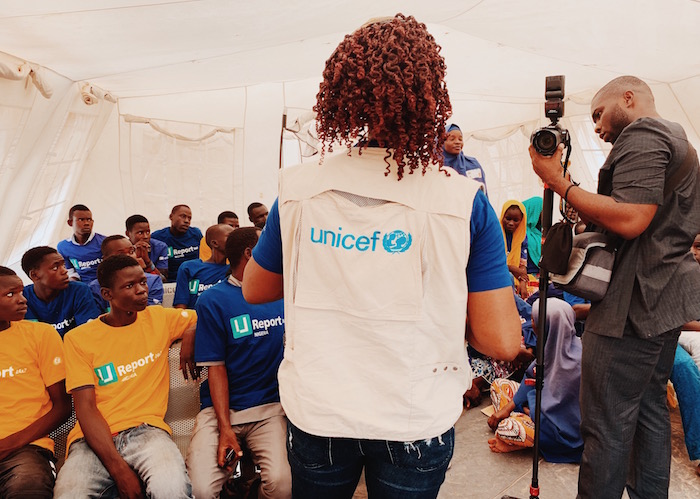 In Adamawa, Nigeria, one of the states where U-Report was piloted, 30 women gather at the center of the hospital’s courtyard. This time it is hot, and the sun is unrelenting. Everyone chats under the shade of the canopy. No men are in sight, and the women relax their scarves. A young woman speaks first: “The last message I received about violence really spoke to me. I responded to the text saying that, Yes, violence is increasing in our community and I want to do something about it. I want everyone to do something about it. It isn’t safe for our children, for us.”

Others begin to echo similar sentiments. A young mother follows, lifting her baby as she stands up. “For me, the information helps me be a better mother. I started boiling my water before giving it to my children. Now, we do it all the time for everyone. But also, I share with other mothers who don’t have phones or don’t know about this program. I just share what I know has worked for me, what is important.”

The others around her nod in agreement. What follow are hours of discussions about all the issues that matter to them, from information that directly influences their behavior to structural issues like high levels of violence against girls and women. The women are discuss what is needed from community leaders, from humanitarian actors — from everyone. They are defining the way forward.

Two years after launching U-Report in North East Nigeria, many lessons were learned, and components of the model were deployed in other countries including Indonesia, Mozambique, Malawi, Zimbabwe and Bangladesh.

In Indonesia, U-Report was rapidly deployed to share lifesaving information and solicit feedback during the 2018 - 2019 earthquake and tsunami crisis. U-Report was also re-designed to track water distribution points in Palu. When packages were distributed, QR sticker codes were placed on the packages to enable communities to provide feedback on the resources received. Although there was a low uptake use of the stickers, a key lesson learned was the need to better engage communities on reporting channels by working more intimately with local actors and community mobilizers. 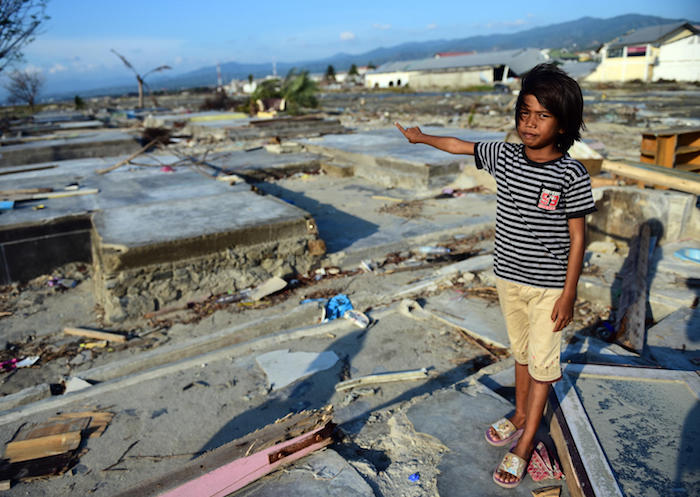 In Talise village, Palu, Indonesia, 9-year-old Tasya points to the ruins of her home, destroyed by the 2018 earthquake and tsunami. When disaster strikes, U-Report allows community members to update others about what's happening in their immediate vicinity and to get up-to-date safety information. © UNICEF/UN0251786/Wilander

Incoming feedback from U-Report users in North-East Nigeria is used to identify areas of actionable change and to shape the ongoing humanitarian response. In a small community in Adamawa state, when the only primary health care center closed due to its poor conditions, concerned community members used U-Report to report it. The incoming reports were collated and shared with government officials and partners. As a result, the government made plans to rehabilitate the health care facility.

When reports and complaints are received, they are referred for action through U-Report's case management tool. A case is not closed until there is a satisfactory resolution that can be reported back to those who raised the issue. This is crucial for trust building; people need to see how their voices are bringing about action and holding both government and humanitarian actors to account.

In Mozambique, social mobilizers were given seven questions to ask affected communities through a face-to-face engagement. Responses were then uploaded to U-Report, collated, analyzed and shared with UNICEF partners to support a coordinated interagency response. The approach of linking offline engagement to digital for rapid analysis extended reach to some of the more vulnerable communities, yet proper inputs of the information received from communities and people’s willingness to respond to the questions proved challenging. The next step will be to better integrate analog and digital data collection. 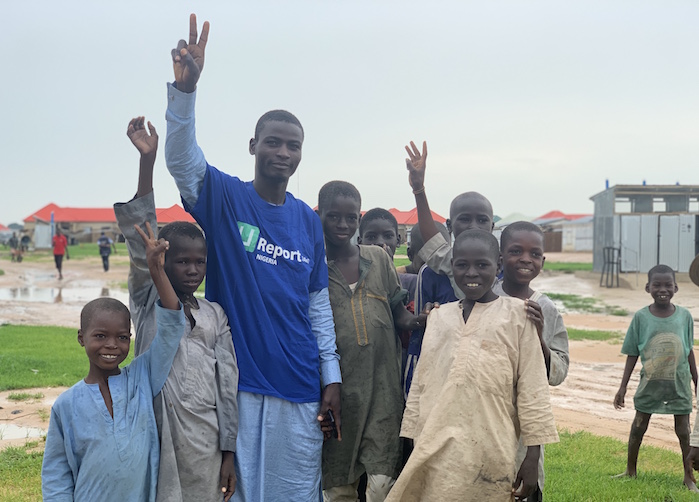 U-Report empowers young people by offering them a way to participate directly in the affairs of their community. © UNICEF Nigeria

Lesson 4: Investing in preparedness is important for a strong, people-centered response

Bangladesh is a good example of identifying areas to support government-led disaster preparedness programming. After Cyclone Fani in 2019, a needs assessments highlighted the importance of investing in preparedness processes with a clear indication that U-Report could support government efforts through its real-time capability (speed) as well as its featured integration across all major social media platforms.

It becomes increasingly clear that looking ahead, humanitarian actors must deepen the commitment to responsibly share power with the communities served. This means a continued investment in strengthening the linkages between digital and analog community engagement mechanism. We must continue to interrogate and invest in building more holistic and integrated systems for continued dialogue between affected communities and humanitarian actors.

Where SMS cannot go, how do we ensure that face-to-face engagement, radio and other traditional methods of information dissemination and community engagement processes feed into a data system that is responsive? When we cannot reach women and girls, how do we innovate and invest in digital and non-digital platforms that are inclusive and safe for women and girls? The questions are many, and so are the opportunities.

Read about how U-Report is being used to protect communities from COVID-19 here and more about U-Report's people-centered approach in the case studies below:

Your generous gift will support UNICEF's lifesaving programs around the world. Please donate.