Six Things You Should Know About Yemen's Deepening Humanitarian Crisis

Three years of intense civil war have pushed underdeveloped, overlooked Yemen to the brink of collapse. UNICEF has been on the ground since the crisis began, working closely with partners to provide nutrition, safe water, health care and immunizations, sanitation, education, physical protection and psychological support to children in Yemen. Please donate now to support UNICEF's lifesaving efforts.

1. Yemen is facing the world's largest, most complex humanitarian crisis. The Middle East's most impoverished country has been devastated by a deadlocked civil war. Social services are barely functional. The economy is in ruins. More than 11 million children in Yemen — 80 percent of all the children in the country — require humanitarian assistance. 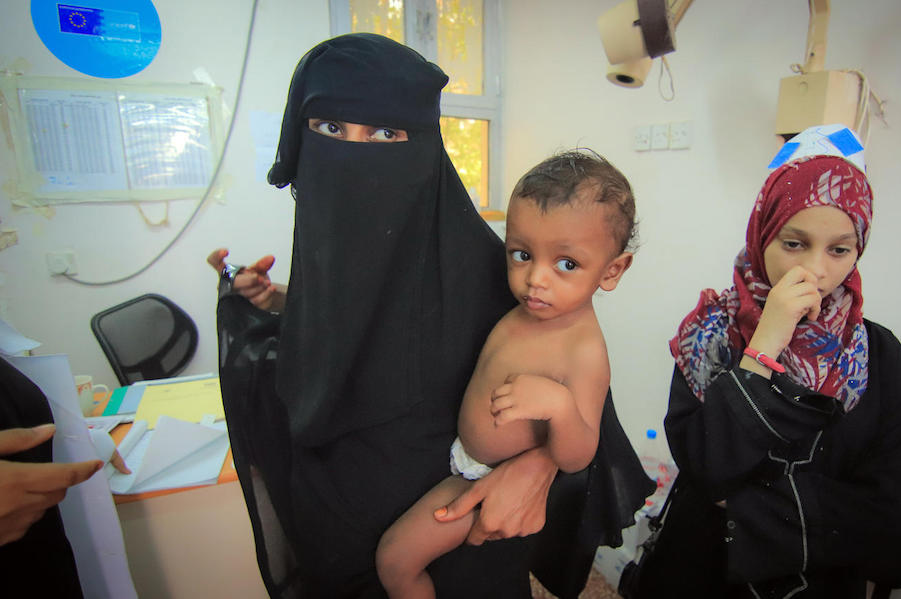 2. A de facto blockade in the Red Sea port city of Hudayda has jeopardized the delivery of urgently needed humanitarian assistance.  Without food imports, famine will engulf the nation. Without fuel imports, critical for water pumping, people's access to safe drinking water will shrink further, leading to even more cases of Acute Watery Diarrhea (AWD) and cholera, both of which can be deadly for small children. UNICEF Yemen has procured and prepositioned vaccines, oral rehydration salts, zinc and IV fluids to treat over 500,000 suspected cases of AWD/cholera. As of October 5, 2018, more than 306,000 people in Yemen, including more than 164,000 children under the age of 15, were vaccinated against cholera as part of a joint WHO-UNICEF campaign. © UNICEF/UN0219828/ 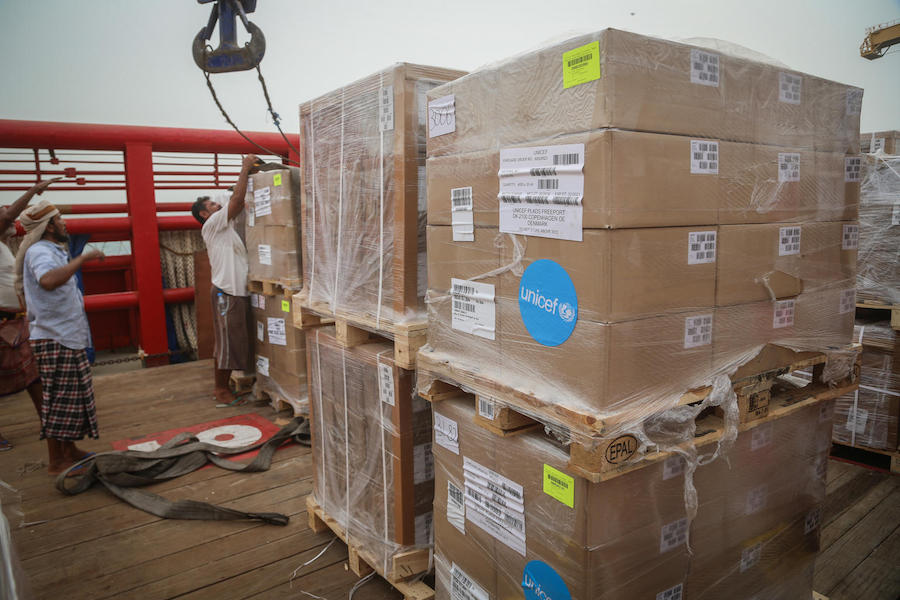 3. Bitter fighting between Houthis and Saudi-led coalition forces has destroyed Yemen's infrastructure. Since 2015, more than half of the nation's health facilities have shut down and 1,500 schools have been damaged due to air strikes and shelling. Remaining schools have been turned into shelters or commandeered by armed groups. This year, UNICEF and partners will reach more than 370,000 Yemeni children with formal or nonformal education. © UNICEF/UN0219920/

4. Soaring inflation in Yemen has nearly doubled the cost of feeding a family, leaving 18.5 million people food insecure. Mothers are desperate to feed their children. The cost of food, fuel and water has skyrocketed as the value of the national currency has plummeted. Supplies of basic commodities including wheat flour, vegetable oil and cooking gas are dwindling.  © UNICEF/UN0219827/ 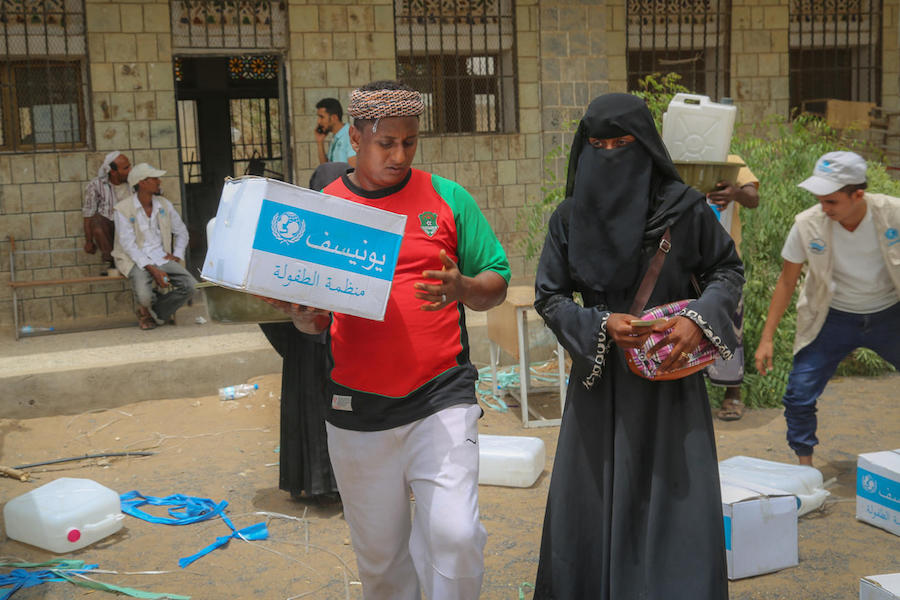 5. UNICEF is on the ground in Aden, Sana'a, Ibb, Hudayda and Saada with a team of more than 250 staff, most of them Yemenis working hard to supply nutrition, health care and other vital services to children. So far this year, UNICEF has worked with its nonprofit and government partners to provide around 9 million people with emergency cash assistance through a joint initiative with the World Bank Group, supplied 4.6 million people with safe water through the rehabilitation of public water systems, treated nearly 800,000 children under age five suffering from severe malnutrition and offered primary health care to nearly half a million Yemeni children.  © UNICEF/UN0219827/ 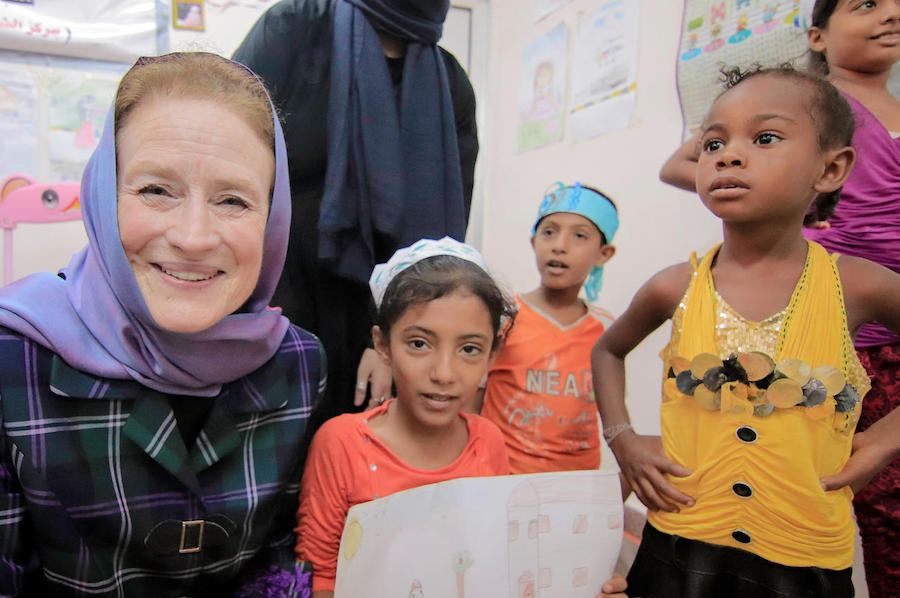 6. Peace is the only way forward. "The only way out of Yemen’s nightmare is to establish peace through a comprehensive political resolution," says UNICEF Executive Director Henrietta H. Fore (above left). "Until then, UNICEF continues its call on parties to the conflict and those who have influence over them to abide by their legal obligations to stop attacks against civilian infrastructure – including the port of Hudaydah – and guarantee safe, unconditional and sustained access to all children in need in Yemen." © UNICEF/UN0219823/