With Yemen on the Brink of Collapse, a Call for an End to the Horrors

Three years of intense civil war have pushed underdeveloped, overlooked Yemen to the brink of collapse. UNICEF has been on the ground since the crisis began, working closely with partners to provide nutrition, safe water, health care and immunizations, sanitation, education, physical protection and psychological support to children in Yemen. Please donate now to support UNICEF's lifesaving efforts.

Yemen's citizens are trapped in a nightmare. With infrastructure destroyed and the nation's economy in ruins, 8 million Yemenis already depend on emergency food aid to survive. That figure could rise to 14 million — half of Yemen's population.

"Millions of desperate children and families across Yemen could soon be without food, clean water or sanitation services because of the deepening economic crisis and unrelenting violence," says UNICEF Executive Director Henrietta H. Fore.

"The cost of food, fuel and water supplies has skyrocketed as the value of the national currency has plummeted. Water and sewage treatment services are at risk of collapse because of soaring fuel prices — meaning many of these same children and families may also be without access to safe water and sanitation." Water, food, fuel and other basic resources remain in critically short supply. Yemen's cholera outbreak is accelerating again, and hundreds of thousands of children are at risk of severe acute malnutrition.

When a country's essential systems and services break down, Fore noted, "children are the first to suffer as their health, education and protection needs are overlooked. Unless we act now, the impact of this war will haunt us for generations to come."

Unless we act now, the impact of this war will haunt us for generations to come. — UNICEF Executive Director Henrietta H. Fore

Fore called on Yemen's warring parties to immediately and unconditionally: 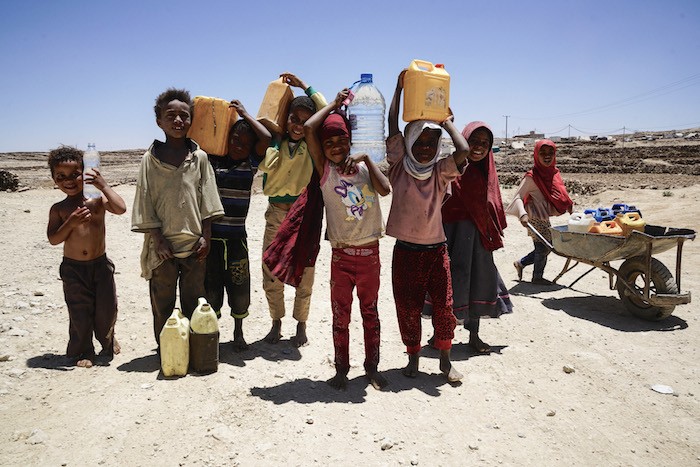 Clean water and other basic needs are in critically short supply in Yemen. Three years of brutal conflict has left the country on the verge of collapse. Some 11 million children are in need of humanitarian assistance. ©UNICEF/UN073858/Clarke for UNOCHA

Even if the conflict were to end today, Fore said, it will take years for the country to rebuild. "The children of Yemen need to heal. They need justice. They need lasting peace, now."

Learn more about the Yemen crisis.

Top photo: UNICEF Executive Director Henrietta H. Fore met with children and families receiving support from UNICEF at the Alqatee'a health center in Aden during her visit to Yemen in June. © UNICEF