She Rallied 2,500 Facebook Friends to Help Syrian Children Under Siege

One day in November, in need of cheering, this Silicon Valley entrepreneur found a way to use social media to bring hope to kids devastated by conflict halfway across the world.

As Syria enters a seventh year of devastating conflict, we appreciate those who take it upon themselves to help. They show us the power of every individual to make a difference in the lives of the children who continue to suffer.

One such person is Narges Bani Asadi.

Narges Bani Asadi is someone who approaches big-picture problems by tackling their most minuscule components. She has deep expertise in systems biology and high-performance computing, a Ph.D. in Electrical Engineering from Stanford University, and holds multiple patents.

Narges is the Founder and CEO of Bina Technologies in Redwood City, California and VP and Life Cycle Leader of Sequencing Informatics at Roche. Bina, founded in 2011 and acquired by Roche in 2014, is comprised of a nimble team of engineers, computer scientists, and genomicists who devote their days to developing ways to personalize genomic analysis and data management — with an eye toward radically raising the standards of healthcare.

Perhaps it was this far-reaching perspective and ambition that enabled Narges, one November day last year, to embrace the idea that many small, individual actions could achieve a large and meaningful purpose: to save and protect the Syrian children under siege and the Syrian child refugees outside the country.

"Here's something hopeful I can do."

The day Narges turned her attention to UNICEF, she had taken the day off work to accompany her parents to a San Francisco hospital. Her mother was very sick. Navigating the curving roads of the Bay Area and the city, Narges’s father, who she describes as “a very ethical man,” spoke about the importance of charity.

At the hospital, the family embarked on a long, difficult day of enduring tests and waiting for results. Narges scanned Facebook. She came across an invitation to start a Facebook Fundraiser for the charity of your choice for Giving Tuesday (November 29). The Bill & Melinda Gates Foundation was offering a match. “Here’s something hopeful I can do,” Narges thought. 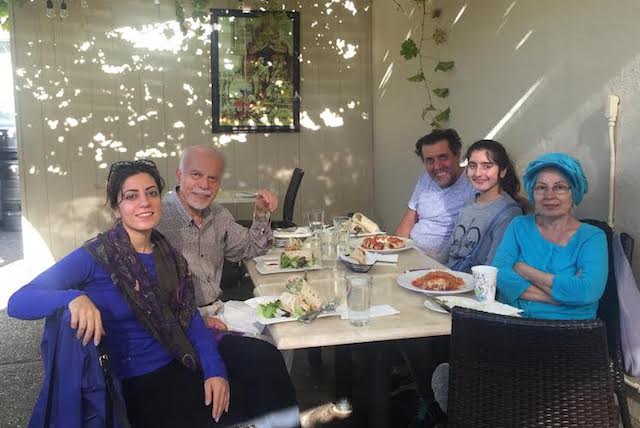 Many small steps led to a big impact.

Narges chose to raise money for UNICEF USA to help Syrian children and Syrian child refugees. She shared her fundraiser, titled "Help Syrian Children Under Siege," with just 50 of her Friends, and set a goal of $5,000.

Over the following two weeks, Narges's plea to "Help Syrian Children Under Siege" was shared and shared again, its circles of influence growing exponentially. The majority donated $20. Very few donated $100 or more. Yet by the time the fundraiser ended on December 13, it had been shared more than 500 times, and almost 2,500 people had donated to help Syrian child refugees. Collectively they had raised over $103,000. Three-year-old Rafi, a Syrian refugee living at Kawergosk Camp in Iraq, receives warm clothing and blankets during a UNICEF distribution in January. © UNICEF/UN042749/Khuzaie

The donations raised were profoundly meaningful to the children and families of Syria. In January alone, UNICEF reached more than 53,000 people in 89 hard-to-reach locations with lifesaving interventions and critical aid. In Damascus and Aleppo, UNICEF reached almost 2 million people with clean safe water and sanitation. And UNICEF helped get 987,000 Syrian kids learning again — despite the toughest challenges imaginable. Every single dollar counted. Every single dollar made a significant difference.

UNICEF USA spoke with Narges to find out why Syria, why UNICEF — and how it feels to make a difference.

How did you choose which cause to support?

NARGES BANI ASADI: “The first thing that came to my mind was Syrian children, because we are all aware of the disaster that's happening in Syria. People justify it by saying it is politics and we can't do much — but everyone can do something. Even if it's small. I just always had this guilty conscious asking, “Why are we not doing more?”

We are all aware of the disaster that's happening, and people justify it by saying it is politics and we can't do much — but everyone can do something.

And what made you choose UNICEF?

NARGES BANI ASADI: UNICEF is always in my mind. I have always had a lot of respect for it. It is a very credible brand. And interestingly, I grew up in Iran — I migrated to the United States about 12 years ago. In Iran, I was aware of UNICEF helping kids with education. So I knew that UNICEF is a good organization, and that it's about children. I knew I can trust UNICEF.

You have agility with all kinds of technologies and apps. Why did you choose to use Facebook for this?

NARGES BANI ASADI: It was easy to do while sitting in the hospital. Since the UNICEF Facebook page already included fundraisers, I didn't have do much planning.

How did you set up the fundraiser?

NARGES BANI ASADI: It was very spontaneous. I selected “start a fundraiser” — it was my first time using this function. I started with a goal of raising $5,000 over 14 days. In the first few hours, it surpassed $5 thousand, so by noon, I changed it to $10 thousand. As I was going to sleep that first night, it was already past $15 thousand.

What do you think made it successful?

NARGES BANI ASADI: First of all, it really showed the power of a social network. Most people contributed maybe $10, $20. A few contributed $1,000, and more contributed $100 or $200. For many, $100 doesn't change anything about their lives — maybe it’s one or two-day expenses. But together, we can raise some tangible money that can really make a difference.

For many, $100 doesn't change anything about their lives ... but together we can raise some tangible money that can really make a difference.

Your fundraiser included daily updates. Was there anything that particularly resonated with your audience?

NARGES ASADI: Yes, people really appreciated when I started sharing the stories about what UNICEF is doing to help children affected by the conflict in Syria. I think they really liked the video that shows children sharing around a Christmas tree.

There's "liking" and "sharing" — and then there's donating.

Do you have a sense of what moved your audience members from "liking" to donating?

NARGES BANI ASADI: It was a call to action. If you look at the number of likes or the number of shares, the posts that actually got most of the attention were the ones in which I asked people for action, the ones in which I told people, "Guys, we're very close, we need to reach beyond this, share, donate." Or, if the post was positive news, I wrote, "I had no idea we were gonna get here. Who knew we would ever get to $60 thousand? Look what we did in these seven days. We can do more."

What's your takeaway from this experience?

NARGES BANI ASADI: It shows that actually, people want to help. And when they saw that I was asking for something, they actually shared the fundraiser and donated. It is very encouraging. And it shows that even when you're a normal citizen, without committing your whole life or family to these causes, you can mobilize people — which is very inspiring.

Were you very surprised by your end result?

NARGES BANI ASADI: About 4% of people who got invited were contributing. I was thinking that 4% is small — but then I realized that even 4% can make a big difference. We don't need to have everyone doing the right thing — even a few people that work together can really drive positive change. And of those who actually donated, about 20-25% shared the fundraiser and encouraged more people to donate, which is impressive.

One of the passions in my life is children's causes — I think it's one of the best ways to build a better world in the future. It all starts with children.

Was there anything special about your network?

NARGES BANI ASADI: When you think about who actually contributed, it relates a little bit to my story. I'm an active member of what I would say is an entrepreneurial community in Silicon Valley, and maybe even more important, an Iranian-American community. So I'm kind of well known in those communities — I'm not a famous person, but I have a strong network among Iranian-Americans in the United States. And if you look at the people who donated, a big percentage is Iranian-Americans.

Yet it wasn't to benefit Iranian children, it was for Syrian children.

NARGES BANI ASADI: It’s interesting. This Iranian-American community is very strong in terms of the members' education and in terms of their ambition and desire to serve. I think it’s just one small example of a community that mobilized over something that matters. Narges makes a positive impact on her adopted U.S.A. while staying connected to her homeland of Iran. Here, she is in Hawaii. © Narges Bani Asadi

NARGES BANI ASADI: One of my passions in life is to be involved in children's causes, especially education. I think it's one of the best ways to build a better world in the future. It all starts with children.

Please donate to help the children affected by the conflict in Syria.