"We are barely breathing," said a mother of three. "Our lives have been destroyed."

UNICEF and partners are providing assistance to children and families displaced by violence in northeast Syria. You can help.

Since the start of military action in northeastern Syria, an estimated 166,000 civilians are reported to have been displaced, many of them multiple times. As of October 27, 11,664 Syrian refugees — including approximately 5,700 children — have entered Dohuk, in the Kurdistan Region of northern Iraq. Many of the recent arrivals are women, children and the elderly. Almost all of them walked long distances through the night, hoping to reach safety. They arrive in physical and mental distress.

"A bomb fell near our house and my 4-year-old son is haunted by that experience. He remembers everything, including the sound of mortars and explosions," said Awaz Subhi, who fled from the town of Kobani, Syria with her three children.

"Even when the children play, they enact the fighting," she added sadly. "The memories are always with us."

I want peace for my children, but it's difficult to imagine life ever getting back to normal.

This is not the first time the family have crossed the border as refugees, Subhi explained. They first came to northern Iraq in 2014 fleeing the so-called Islamic State. They stayed in Erbil, the capital of the Kurdistan region, for 11 months before returning home.

"I want peace for my children, but it's difficult to imagine life ever getting back to normal," she said with the weariness of someone who has witnessed too much conflict. "We are barely breathing. Our lives have been destroyed." 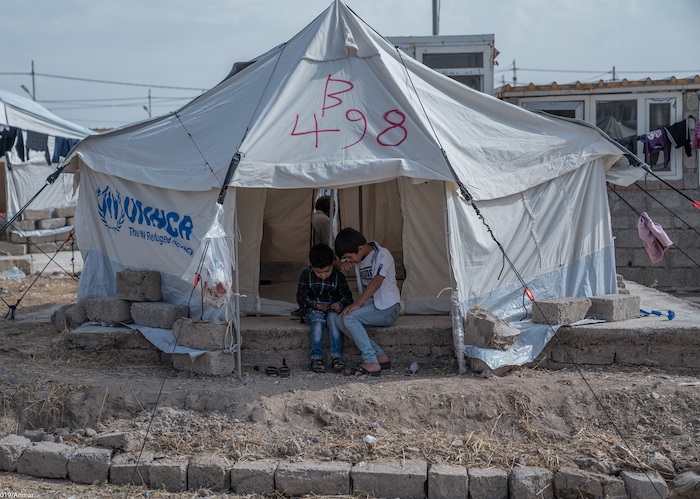 Five-year-old Salam (left) and 10-year-old Salih, both from Hasakeh, Syria, are part of a wave of refugees arriving in Iraq who are receiving lifesaving assistance from UNICEF and partners. © UNICEF/UNI00807/Iraq/Rfaat

UNICEF and partners are providing lifesaving assistance to vulnerable people at the Iraq-Syria border crossing. UNICEF is distributing water and other essentials to refugees before they are transported to the camps, where they are provided with temporary shelter, food, water and basic relief items including sanitation. Medical teams are available if assistance is needed.

The children tried to be brave as we walked to the border, but they are starting to understand the meaning of war.

Dalil Suliman and his family of five fled from Ras Ain. "The air strikes started late at night and carried on throughout. As soon as I could, I sold my motorbike and paid a smuggler $400 to show us the way out," he said.  "The children tried to be brave as we walked to the border, but they are starting to understand the meaning of war." 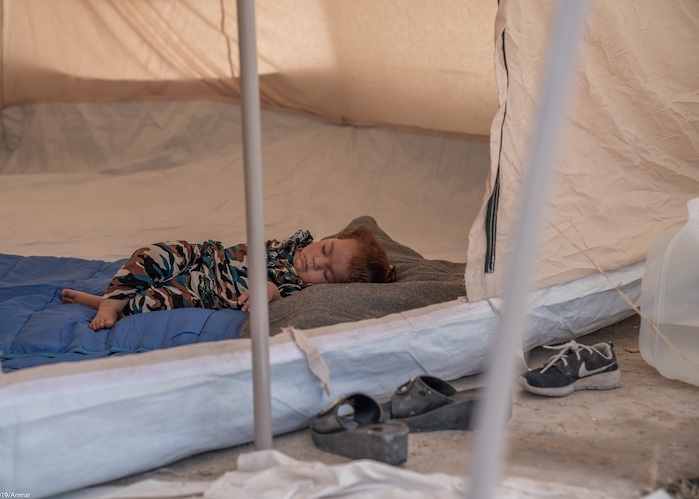 Darya, a 2-year-old from Qamishli in northeastern Syria, sleeps alone in a tent in the Barderash refugee camp in Akre, Iraq on October 21, 2019. © UNICEF/UNI218429/Rfaat

"The journey to safety was extremely hard and the children have endured so much," explained Hamida Lasseko, UNICEF's Representative in Iraq. "Our priority is to reintroduce a degree of normalcy in their lives as quickly as possible, and to identify the most vulnerable children, including those who have been separated from their caregivers while fleeing the violence."

Our priority is to reintroduce a degree of normalcy in their lives as quickly as possible, and to identify the most vulnerable children, including those who have been separated from their caregivers while fleeing the violence.

UNICEF's mobile child protection team has so far identified nine unaccompanied children at the Sahela border near Duhok and Ninewah. Six of the children have already been reunited with their families, two have had their families traced and are awaiting reunification and one child is still being looked after while the search for family members continues.

In the camp, UNICEF is working on setting up Child-Friendly Spaces to give children a safe place to play and relax, and establishing temporary learning spaces so that students can quickly resume their education. Health and nutrition teams are also in action, working to vaccinate all children under age 15 against polio and measles in order to prevent disease outbreaks.

Between October 9 and October 23, the movement of 200,4565 people was recorded in Syria. Of these, 139,265 people remain displaced in Hasakeh, Raqqa and Aleppo governates, while 61,200 people have returned to their areas of orgin in Hasakeh and Raqqa governates. In addition to the newest refugees, Iraq continues to host more than 250,000 refugees and asylum-seekers who arrived in the country following the conflict in Syria in 2012 and 2013.

On October 27, the Syrian Humanitarian Fund was launched with a reserve allocation of $15 million to support partners in Syria responding to the crisis in northeastern Syria. Refugee response in Iraq remains highly underfunded. There will be a need to mobilize new, additional resources to respond to the humanitarian needs of the increasing number of new arrivals.

Children did not start the war in Syria, but they are paying the highest price. Please support UNICEF's work to save and protect vulnerable children.