As the COP27 climate conference gets underway in Sharm el Sheikh, Egypt, UNICEF is sounding the alarm: this year has brought devastating flooding to 27.7 million children in 27 countries worldwide.

"We are seeing unprecedented levels of flooding all around the world this year, and with it, an explosion in threats to children," said Paloma Escudero, head of the UNICEF delegation for COP27.

"The climate crisis is here. In many places, the flooding is the worst it has been in a generation, or several. Our children are already suffering at a scale their parents never did."

Flooding exacerbates a number of risks for already vulnerable children. Where there is flooding: 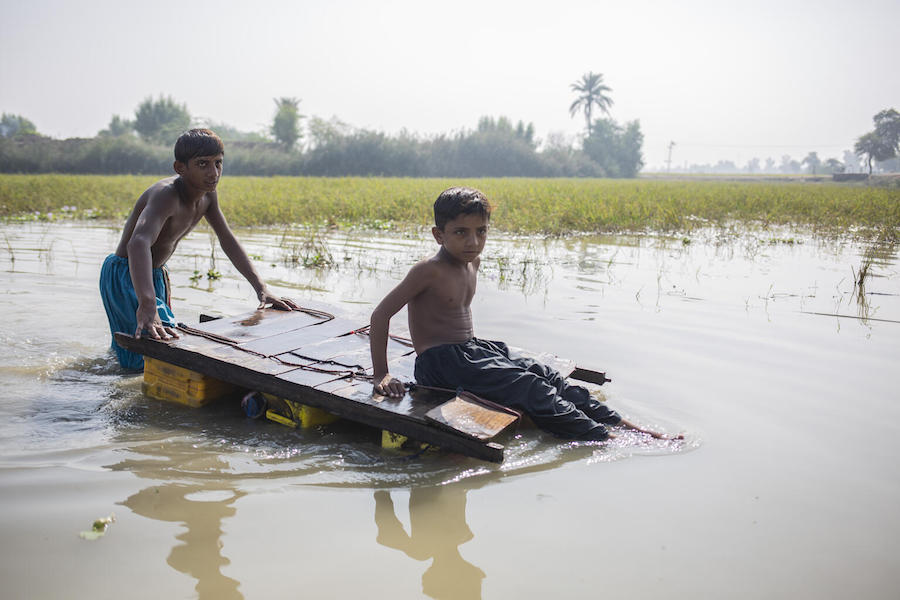 The aftermath of flooding is often more deadly for children than the extreme weather that caused the floods in the first place. In 2022, floods have contributed to the increased spread of major killers of children, such as malnutrition, malaria, cholera and diarrhea.

Above, children make their way home through stagnant floodwaters in Jacobabad, Sindh Province, Pakistan, on Nov. 3, 2022. 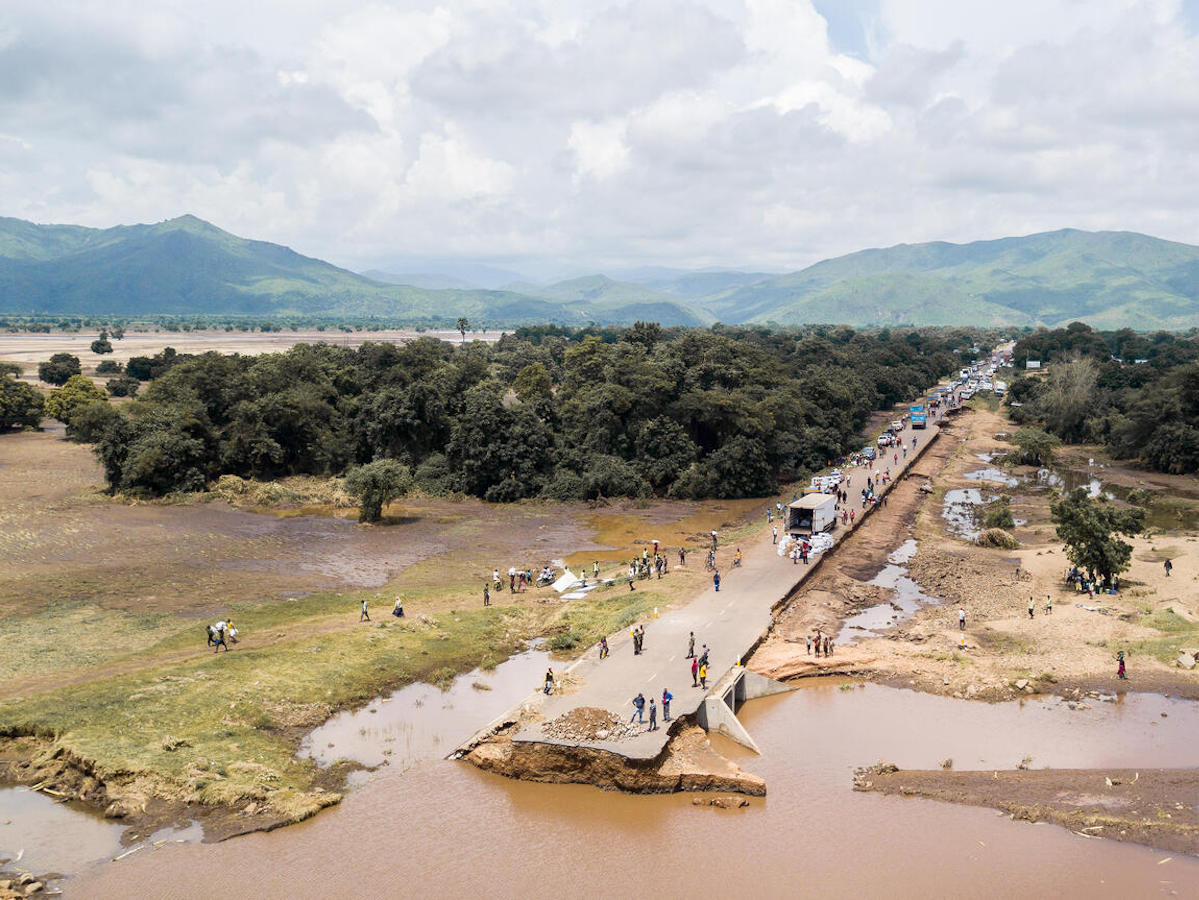 In January 2022, Tropical Storm Ana's torrential rains caused major flooding in Malawi. Above, an aerial view of the devastation in Chikwawa district in the Southern Region.

Extensive damage to Malawi's water and sanitation systems created the perfect conditions for a cholera outbreak that has since claimed the lives of 203 people, 28 of them children. To date, 1,631 children have been diagnosed with cholera, an acute diarrheal illness caused by drinking contaminated water. 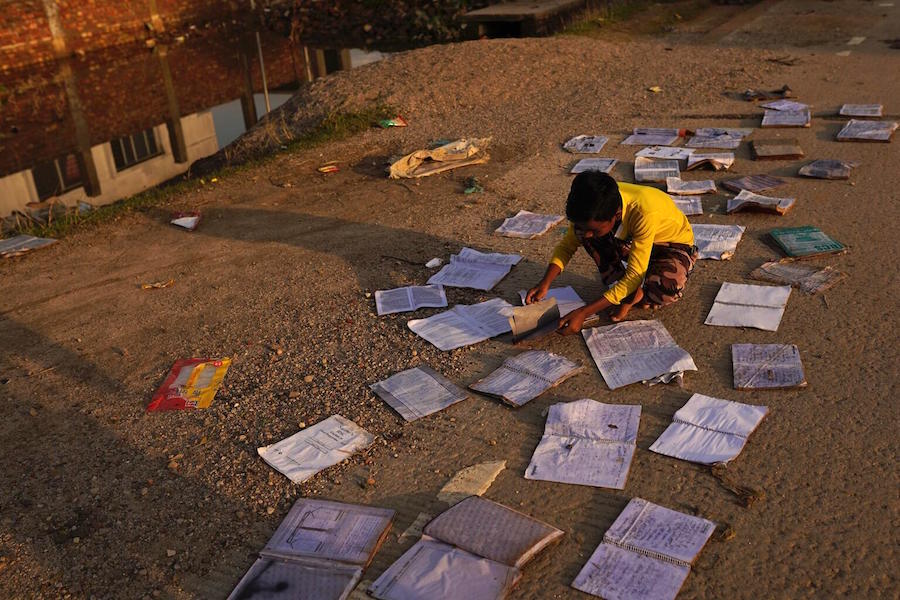 Flooding damages and destroys school buildings, interrupting children's education and threatening their future. In May and June 2022, 7.2 million people — including 3.5 million children — were swamped by one of the worst floods in northeastern Bangladesh in 122 years. Above, a boy in Sylhet district spreads his soaked school books, salvaged from his family's flooded house, out to dry on a patch of high ground. 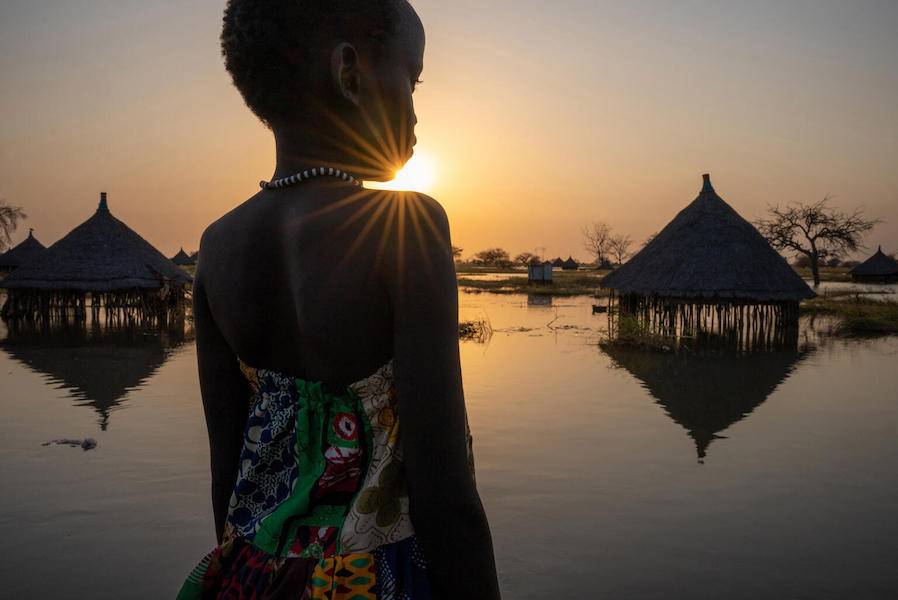 Torrential rains and flooding in 9 out of 10 states in South Sudan have forced families into temporary camps where they are living in limbo, unsure if or when they will be able to return home. Over 900,000 people have been directly impacted — half are children.

"We are not a statistic in a report," said Hans, a young climate activist from South Sudan. "We are people, living in a crisis we did not create."

Above, a girl looks out over houses surrounded by floodwaters in Panyagor, Twic East, Jonglei State, South Sudan.

Since September 2022, Nigeria's worst flooding in a decade has displaced an estimated 1.4 million people. Children living in makeshift displacement sites lack access to basic facilities and are in danger of becoming separated from their families and experiencing gender-based violence.

Above, Akpoebi Germany, far left, and his children rigged up a wooden walkway to cross the flooded yard outside their home in Sagbama, Bayelsa State, Nigeria.

Today's political decisions are leading to a world of global warming that is becoming unlivable for billions of people. COP27 provides an opportunity to chart a credible road map with clear milestones for financing climate adaptation and solutions for damage and loss, Escudero said.

"These rolling disasters are straining the ability of governments and the international community to respond at the enormous scale needed," she said.  "Young people from the most affected areas on earth are drowning in climate inaction. Enough is enough. Lives are on the line — children need action now."

Help UNICEF stay at the ready to help children and families when climate-related disasters hit and build back better to withstand future shocks. Please donate.

Top photo: Twelve-year-old Alekiir stands in the floodwater where she washes her family's cooking pots outside the village of Panyagor in Twic East, Jonglei State, South Sudan. "I often feel sick because of the floodwater," she said. "There's been so much disease around here." © UNICEF/UN0594312/Naftalin