It’s nearly two weeks since Cyclone Idai made its deadly assault on Mozambique and neighboring countries. Shell-shocked parents who have made their way to a shelter in the district of Gondola, in western Mozambique, are just beginning to grapple with the difficult road ahead. With their homes and everything in them destroyed, families desperately need help to keep their children healthy and safe.

Idai made landfall in Mozambique’s Sofala region March 14, pounding the area with heavy rain and 106-mph winds, which cut the power to the 500,000 residents of the port city of Beira. Initial eports of a nearly 20-foot-high storm surge hinted at utter destruction, which the first flights over the region five days later confirmed as the rain continued to fall and families, sheltering in buildings left only half standing, struggled to survive without food or water.

With many of the hardest hit areas inaccessible at first, the picture of human suffering emerged in horrific fragments. Photographs of people crowded on rooftops waiting to be rescued. A CNN report that as many as 300 to 400 bodies lined the banks of a road leading out of the city. Satellite photos of the “inland ocean” created by the floodwaters that was large enough to be visible from space.

As of March 25, the confirmed number of deaths in Mozambique is 293. But the United Nations Office for the Coordination of Humanitarian Affairs (OCHA) spokesperson Jens Laerkeut warns that those numbers are expected to rise:

"Many areas remain inundated and tragically, the counting of the dead will take some time.”

The storm and flooding caused by the tropical depression that moved into the area in early March have impacted an estimated 3 million people in Mozambique, Zimbabwe and Malawi, around half of them children. Roads and bridges have been washed away; homes, schools and businesses have been destroyed. The search-and-rescue operation continues as thousands of people remain stranded in the floodwaters. 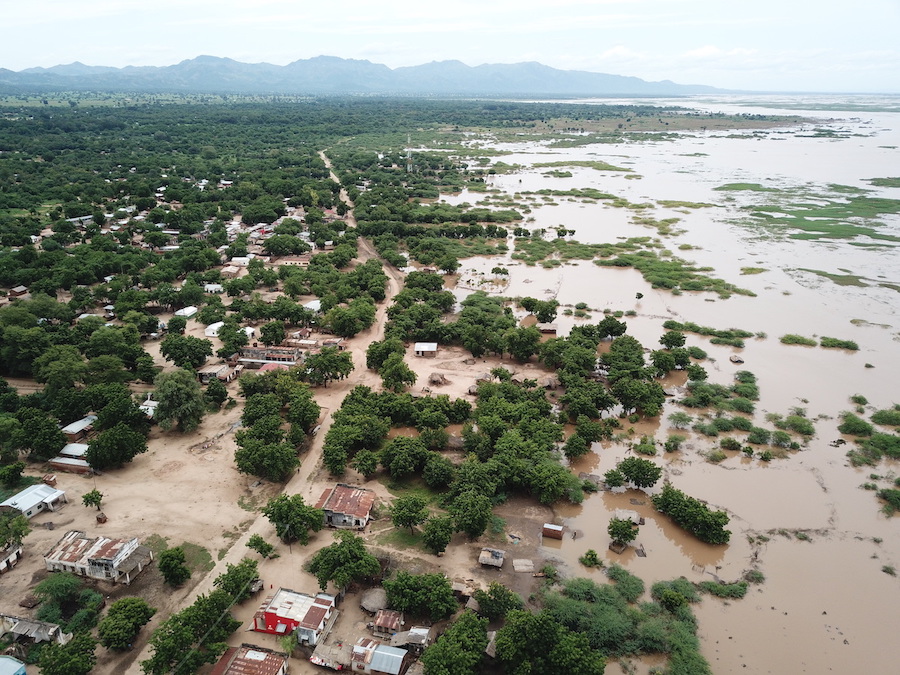 Marka (above), located on the Malawi – Mozambique border, has been partially submerged by the Cyclone Idai floodwaters. Some areas have fared far worse. Humanitarian aid officials who flew over affected areas last Tuesday described an endless stretch of water, running for mile after mile.

“Many people are in desperate situations; several thousand are fighting for their lives at the moment, sitting on rooftops, in trees and other elevated areas,” said UNICEF spokesperson Christophe Boulierac. “This includes families and obviously many children.”

At a warehouse (above) now serving as a shelter in the district of Gondola in western Mozambique, some 150 families from 11 different neighborhoods have come for help. The majority of the people here are women and children. They are being treated by members of a mobile healthcare team, the children mainly for diarrhea and respiratory infections. So far, at least two children have been diagnosed with malaria. As the health workers take children's vitals, they offer comfort to mothers who have harrowing stories to tell.

Angelina Paulo (below), a 35-year-old single mother of seven, was inside her home with her four youngest children when the cyclone hit. 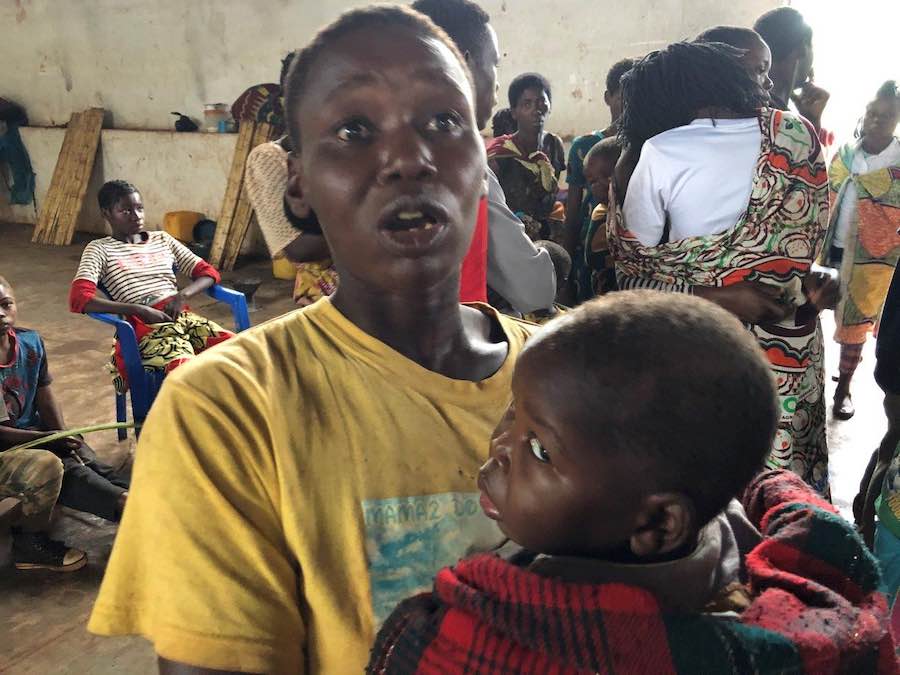 “First it was the wind blowing hard and making noises and then came the heavy rain. All of a sudden, the roof went down over our heads," she said. "We managed to get out alive and ran to a neighbor’s house, where we stayed until the storm passed. We moved to find shelter at the nearby school. Then we came here. I just went to my plot of land to get something, but everything is destroyed. I’ve lost everything — my house and my crops.” 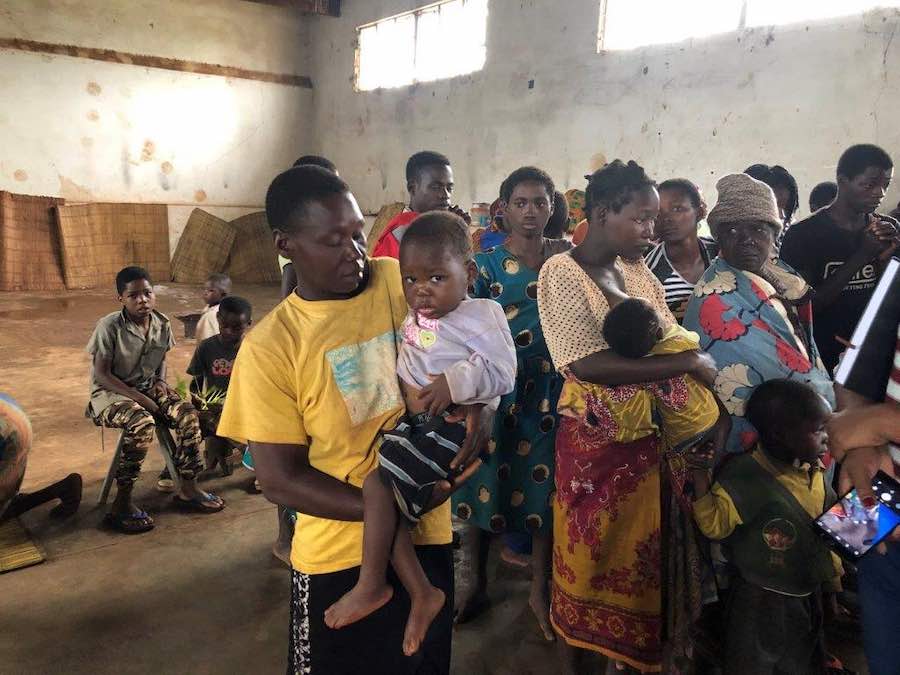 Paulo’s 3-year-old son, António (above), is running a temperature. Upon closer examination, doctors discovered his condition is far more serious. Antonio is suffering from Severe Acute Malnutrition (SAM) and malaria. Though the toddler will need to be transferred to a health center, the mobile health team begins treating him for malaria and starts him on a course of Ready-to-Use Therapeutic Food (RUTF) to stabilize him and help him to feel better. 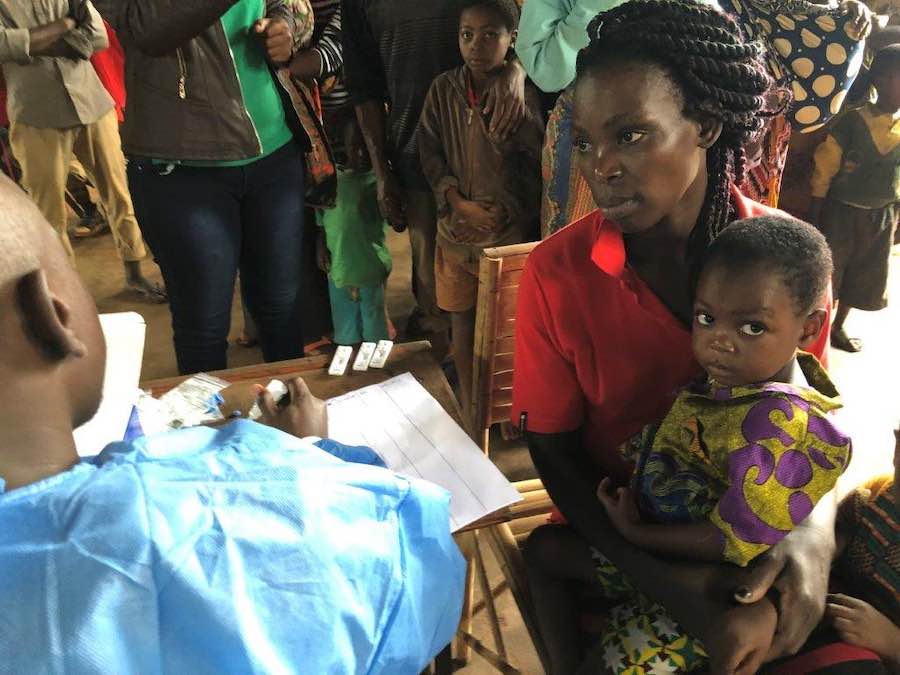 UNICEF is working in close coordination with the Mozambique government and partners to scale up its response quickly so it can help more families like Paulo's. “Hundreds of thousands of children have already seen their lives turned upside-down by the devastating floods, and now Cyclone Idai has brought further suffering to families in its path,” said UNICEF Regional Director for Eastern and Southern Africa, Leila Pakkala. “Many children will have lost their homes, schools, hospitals and even friends and loved ones. UNICEF is on the ground working to meet the immediate needs of affected children and their families.”

Top photo: In some areas, Cyclone Idai flooding has transformed the landscape in Mozambique and Malawi into an endless stretch of water. Photo credits: top two photos, © UNICEF/Juskauskas; all other photos, © UNICEF Mozambique/2019/Javier Rodriguez