Meningitis: Symptoms, Treatment and Other Facts You Need To Know | UNICEF USA

Meningitis: Symptoms, Treatment and Other Facts You Need To Know

Meningitis is a serious disease affecting many kids worldwide. UNICEF is leading the way in meningitis prevention and treatment within vulnerable populations. Here's how you can help — and everything else you need to know about symptoms, treatment and how to protect yourself and your loved ones.

Bacterial meningitis, or meningococcal disease, is relatively rare in the United States but remains a threat in many of the countries where UNICEF has been working for over 70 years, putting children first.

Here are the answers to some Frequently Asked Questions about this devastating disease based on information provided by the U.S. Centers for Disease Control and Prevention, the World Health Organization and other sources.

Meningococcal meningitis is a bacterial infection in the membranes that surround the brain and spinal cord (the meninges). The bacteria that causes the infection is typically carried in the nose and throat; from there it can spread through the bloodstream to the brain.

What are the causes of meningitis?

There are many different types of bacteria that can cause it. There are also viral, fungal, parasitic and noninfectious forms of the disease, but bacterial meningitis (meningococcal disease) is the most dangerous and the target of global elimination efforts.

How prevalent is it?

In the United States, incidence rates of the life-threatening form of meningitis have sharply declined since the mid-1990s, hitting an historic low in 2016. Vaccines are available and recommended for those considered at highest risk, primarily young people.

Due to a variety of factors, meningitis remains a major public health threat in Africa. There are 26 countries that make up the "meningitis belt," stretching from Ethiopia in the east to Senegal in the west. Roughly 30,000 cases are still reported annually in the region. The outbreaks tend to happen during the dry season, which lasts from December to June, a time when dust winds and cold nights cause respiratory tract infections that can lead to meningitis.

Vaccinations have helped reduce the number of cases worldwide, but do not protect against every type of germ that can cause the disease.

How easy is it to catch meningitis?

The bacteria that cause meningitis can spread from person to person. Coming into close contact or sharing close quarters with an infected person puts you at risk — mainly from exposure to droplets that are released into the air from the nose or mouth whenever that person sneezes or coughs. Those who pick up the infection may or may not become ill.

What are the symptoms of meningitis?

Meningitis in babies and children

The disease can affect people of any age, but most cases occur in babies under a year old, in teenagers and young adults. Infants with meningitis often present with a bulging fontanelle (known as the soft spot on a baby's head) and a ragdoll-like appearance. The CDC recommends vaccinating children as young as six weeks old only if they have certain medical conditions or will be traveling to specific countries.

How is meningitis diagnosed?

A clinical exam typically includes a spinal tap test — drawing spinal fluid through a puncture in the lumbar region (lower back). The spinal fluid is tested for the bacteria to determine appropriate antibiotic treatment.

How can you treat meningitis?

Early treatment with antibiotics is critical to save lives and reduce complications and decrease the risk of transmission. If left untreated, the survival rate is only 50%. Up to one out of five survivors suffer complications that can be permanent, such as brain damage or hearing loss.

How is UNICEF helping?

A big part of UNICEF's mission is to link children and families with the services and support they need to get and stay healthy. This includes making sure children are immunized against vaccine-preventable diseases such as meningitis. UNICEF procures vaccines and vaccine-related supplies for around 100 countries annually, including vaccines that protect against meningitis.

UNICEF supports the WHO's three-tiered strategy that includes:

When epidemics occur, UNICEF provides technical and operational assistance to local health districts that are affected. 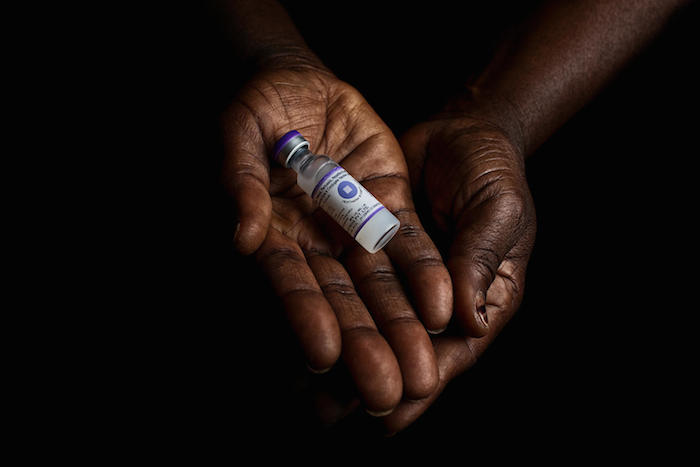 UNICEF and partners introduced the Pentavalent vaccine in Somalia in 2013 to protect against five different diseases, including Hib (short for Haemophilus influenza type b), a bacteria that can lead to a life-threatening form of meningitis in children. Three years later, UNICEF negotiated a deal with manufacturers that cut the cost of the vaccine in half. It is now one of the most widely used vaccines in the world © UNICEF/UN0198285/Njiokiktjien VII Photo

How effective are vaccines against meningitis?

Vaccines to protect against meningitis have been available for decades, but no one vaccine protects against every type or form of the disease. The two that UNICEF procures are the Pentavalent vaccine, a relatively new vaccine that protects against five diseases, including Haemophilus influenza type b, or Hib, which can lead to meningitis, and the meningococcal A conjugate vaccine, which was introduced in Africa in 2010 to protect against a strain commonly found on the continent.

UNICEF has worked steadily to help countries incorporate these vaccines into routine immunization programs for children worldwide, particularly those living in conflict and other hard-to-reach places.

Mobile health teams supported by UNICEF Nigeria, for example, work to ensure that children receive vaccinations against meningitis, as well as polio, measles and other diseases as part of a comprehensive package of preventative care for children. As part of ongoing emergency response in Yemen — where conflict has decimated the health system, endangering millions — UNICEF airlifted 1.9 million doses of vaccines to immunize 600,000 kids there.

A global immunization campaign spearheaded by GAVI and supported by UNICEF has helped drastically reduce the number of cases of the more common types of meningitis in recent years.

Mothers bring children to a UNICEF-supported mobile health clinic in Kadaura, settlement, Niger State, Nigeria, where they are vaccinated against meningitis as part of a package of preventative care. © UNICEF/UN0269700/Knowles-Coursin

Is there a plan to eradicate meningitis once and for all?

Progress against meningitis has lagged behind other vaccine-preventable diseases. A technical task force convened by the World Health Organization, and supported by UNICEF, is developing a road map for defeating meningitis by 2030. Part of UNICEF's role will be to help address market conditions as needed to ensure adequate supplies of the vaccine, and to support public awareness and communication plans. Additional details are provided in the task force July 2018 meeting report.

How can I help UNICEF save and protect kids at risk of contracting meningitis?

Contribute to UNICEF's ongoing efforts to fight and treat meningitis around the world. Every donation of any amount makes a difference.

Learn more about meningitis, the many different causes and symptoms, and how to protect your kids.

Learn more about the vaccines the CDC recommends to protect against meningitis.

Learn more about how vaccine hesitancy in the U.S. is threatening to bring back diseases of the past — including mumps, which can lead to viral meningitis.

Top photo: A child in Côte d'Ivoire is immunized against meningitis as part of a UNICEF-supported effort to protect kids against vaccine-preventable disease. © UNICEF/UN0265884/Dejongh