In the arid deep south, less than one quarter of the population can get drinking water regularly. And this year, El Niño has hit the region hard.

Tsihombe district, Madagascar, August 2016 - Under a blazing sun, men, women and children are digging in the sand. Holes are scattered everywhere in what used to be a river, suggesting a kind of gold rush. And indeed, it is a rush for something more precious than gold: liquid blue gold! In the dried-up Manambovo riverbed in Madagascar's southernmost Tsihombe district, people and cattle share the water, for drinking, showering, washing laundry and doing the dishes. 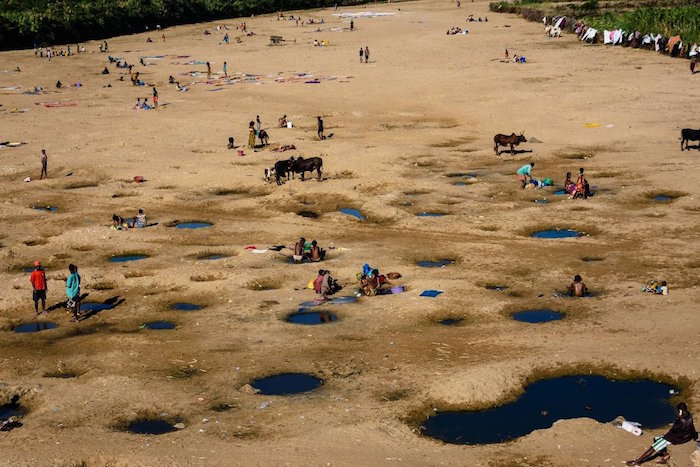 For three-quarters of those living in the deep south of Madagascar, it's impossible to get drinking water regularly. Manambovo River, Androy Region, Madagascar. ©UNICEF Madagascar/2016/Ana Gabriela Guerrero Serdan

Water has always been a major issue in this arid part of Madagascar. In the deep south, less than one quarter of the population has regular access to drinking water. In districts like Tsihombe, only two percent of the population has drinking water. And this year, El Niño has hit the southern regions badly. Water has become more and more scarce. Entire rivers, wells and water tanks are dry.

In districts like Tsihombe only two percent of the population has drinking water.

In July, Kyung-Wha Kang, a high-level U.N. humanitarian aid official, visited Madagascar to witness first-hand the impact of the devastating drought. Assessing the emergency response from the international community, she met with communities in the South. She quickly realized the extent of the water crisis:

"Water, which is hard to generate and harvest at the best of times in this arid region, is now critically short due to the drought. For example, driving to a project site along bumpy dirt roads, our convoy had to stop and wait for a farmer carting water home from a small, muddy puddle in the middle of the road. The same puddle was also used by cattle and other livestock. Then we had to drive through the puddle to get to our project site. The farmer and his family then used the water for drinking without any further treatment. That was one of most jarring experiences," said Ms. Kang. 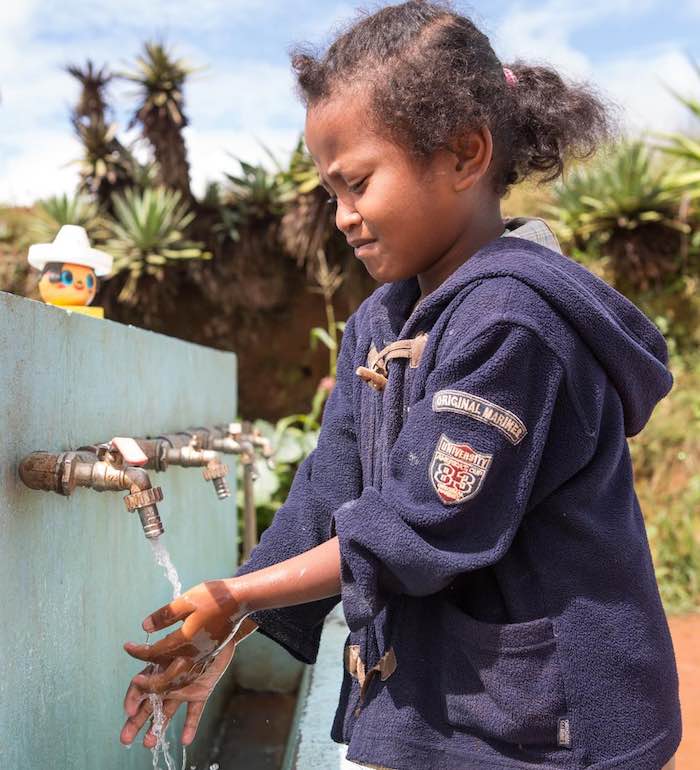 In response to the crisis, UNICEF worked in close collaboration with the Ministry of Water, Sanitation and Hygiene to help expand water access and water efficiency.

"With local communities and authorities, we set up groundwater extraction systems, using solar energy," explains Silvia Gaya, Chief of Water, Sanitation and Hygiene at UNICEF Madagascar. "These systems are managed by private operators in collaboration with local water point committees. The whole community, households, schools and health centres is regularly provided with safe drinking water. Families use the water for their household needs but also for their micro-irrigation activities, cattle watering and seeds production. UNICEF actions help people continue farming for their own consumption and for selling.”

Imongy and the surrounding villages are examples of communities benefiting from UNICEF’s WASH actions. Leonard lives in the village of Antsakoamanga, in Tsihombe district. Every day, he walks more than six miles of bad road to gather water in the village of Imongy at the water point built by UNICEF.

Every day, early in the morning, the water point in Imongy is crowded with men and women with their yellow jerry cans. And every day, Leonard fills the 50-gallon barrel on his cart. He needs to bring this water back home for his large family.

I am very relieved and grateful to have this water point. Before, we had to walk much further to find water.

Also among the people gathered at the water source is Mrs Voromasy. With great patience, she waits for her turn and talks with her friends. "I am very relieved and grateful to have this water point," she says. "It really helps us. Before, we had to walk much further to find water, which is muddy most of the time and not enough for our needs. Our children were suffering from diarrhea and missed school very often." 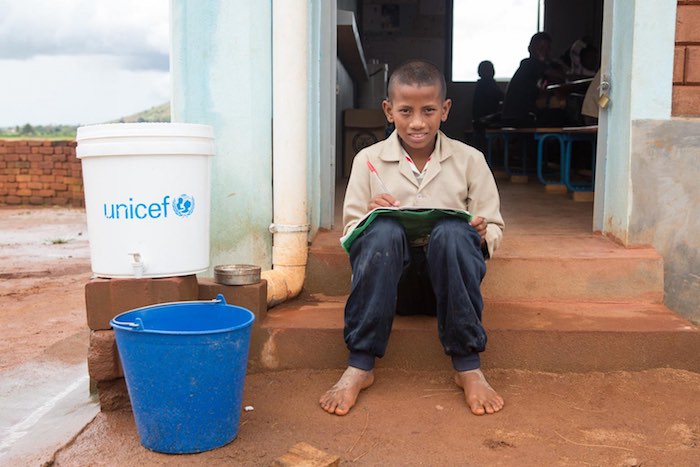 Elyse Christian Mianvontsoa's family is struggling to both provide food and pay their children’s school fees. At the Lohanosy Primary School, where Elyse studies, UNICEF supported construction of water and sanitation facilities as well as classrooms. ©UNICEF/UNI180140/Matas

Access to safe drinking water — and improved sanitation and hygiene, especially handwashing in homes, schools and health centres — go a long way toward addressing the multiple deprivations of the Malagasy population. These measures can reduce mortality due to diarrhea, fight against chronic malnutrition (which affects half of children under the age of five), keep children in school and increase their overall wellbeing and productivity there. These factors, in turn, contribute to the attainment of the U.N.'s Sustainable Development Goals.

Poor access to water and sanitation costs Madagascar up to US$567 million per year.

Poor access to water and sanitation costs Madagascar up to US$567 million per year. Yet, every US$1 invested in water supply and sanitation interventions could yield a return of US$3.20.

By 2019, UNICEF, in collaboration with the Ministry of Water, Sanitation and Hygiene, aims to provide 500,000 people with access to safe drinking water.

Take a look at UNICEF water projects around the world here.