Accelerating UNICEF's humanitarian response in Indonesia is just the latest example of how UNICEF USA is leveraging its innovative financing tool to support the global mission for children.

The 7.4-magnitude earthquake that struck off the coast of Sulawesi, Indonesia on Sept. 28 wasn't the first to hit the Southeast Asian nation of islands last summer, but it was the strongest — and deadliest. A tsunami followed; then, a volcanic eruption, landslides and soil liquefaction — literally, earth turning to soup — causing homes to collapse and sending hundreds of thousands of island residents fleeing for stable ground. More than 2,000 people were killed, another 212,000 displaced. 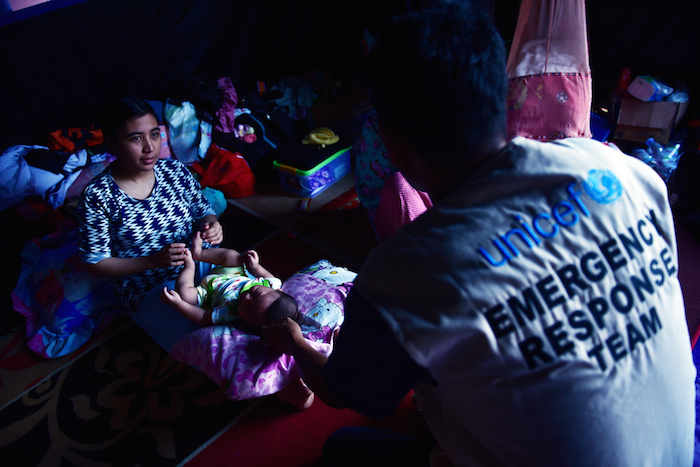 A UNICEF child protection officer helps a mother and her child seeking support after a devastating earthquake and tsunami in Palu, Sulawesi island, Indonesia. © UNICEF/UN0245813/Wilander

While UNICEF works to address the root causes of extreme weather and mitigate its effects on vulnerable populations, when weather-related disasters like this occur, how can the organization — one that relies on annual contributions from governments and donor pledges — move so fast?

One answer: the UNICEF USA Bridge Fund, an impact investing tool created and managed by UNICEF USA. Aptly named, the Bridge Fund helps bridge potential fundraising gaps to support a swift response in a crisis, when any delay to act can cost lives; in other words, it temporarily covers costs to help UNICEF avoid a cash flow problem.

For Indonesia, the Bridge Fund provided $500,000 to UNICEF to accelerate the delivery of humanitarian aid and child protection during those critical first days and weeks. The full amount was replenished 10 days later by various donors, deposited back into the equity pool and available for the next urgent need. Nearly three months later, UNICEF continues to work with partners in Indonesia — in Sulawesi and also in Lombok, where a series of earthquakes had displaced 340,000 people last August — to provide health care, nutrition and education for children, setting up temporary learning centers for kids whose schools had been destroyed while helping communities rebuild. 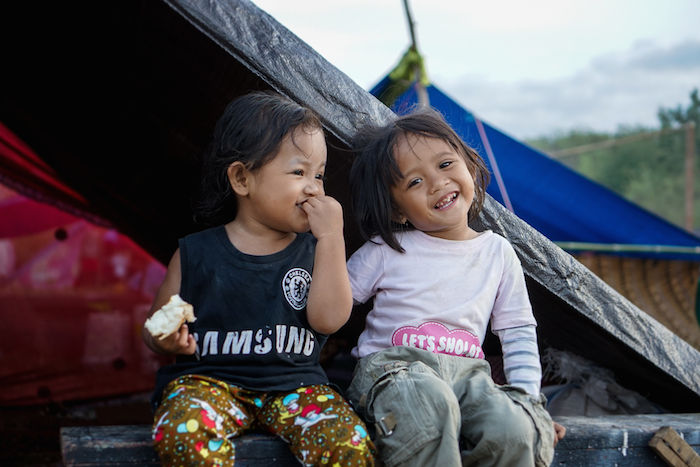 Lisa, 3, above right, received psychosocial support services from UNICEF following the Sept. 28 earthquake that destroyed her family's home in the Balaroa area of Sulawesi. Her mother recalled: "When the ground started moving, my children were thrown about the house, and the eldest was stuck in the cupboard. I crawled on my hands and knees to save Lisa from the hole in the ground. It felt like the world was ending." ©UNICEF/UN0250102/Veska

In addition to supporting UNICEF's emergency response activities, The Bridge Fund has another important purpose: it also provides significant financing support for UNICEF's core programs. Bridge Fund dollars are dispensed strategically to accelerate, and amplify, UNICEF's contributions toward the Sustainable Development Goals (SDGs) in health and other areas. More than a handy stop-gap, it is a tool to be leveraged to serve UNICEF's broader commitments to children.

The area where the Bridge Fund has been most heavily involved is in UNICEF's immunization work. Specifically, the Bridge Fund pays for vaccine procurement, helping to maintain supplies at the best prices, and to support immunization campaigns. In Papua New Guinea, for example, $1.5 million from the Bridge Fund accelerated the purchase of vaccines and injection devices and covered operational expenses incurred during a recent massive effort to eliminate maternal and neonatal tetanus (MNT). UNICEF is the largest procurer of vaccines in the world, and vaccinates about 40% of the world's children against diseases such as polio, measles and rubella.

The Bridge Fund is also a way for investors to get into impact investing — a booming trend, especially among millenials. The Bridge Fund accepts both outright donations and loans. Lenders earn a fixed rate of return — with the added bonus of knowing their money is being put to work for children in need. "It's a low-risk, high-impact vehicle," explains Bridge Fund Director Erin Egan, "and it's steadly growing. The whole point is to support UNICEF so that cash flow issues never interfere with the mission of saving and protecting lives."

With the enormous gap in funding that will be required to meet the SDGs — an estimated $2.5 trillion annual shortfall —the UNICEF USA Bridge Fund, Egan points out, "is a way to get investor dollars to help fill that gap."

Thanks to increased interest among investors, the Bridge Fund has grown from $5 million to $40 million in just seven years.

To find out more about how you can be an investor or donor to the UNICEF USA Bridge Fund, contact Erin Egan at eegan@unicefusa.org.

Top photo: Marwah, 8, stands amid the ruins of her family's home in Palu, destroyed when a tsunami hit the island of Sulawesi, Indonesia. The UNICEF USA Bridge Fund supported the initial deployment of UNICEF personnel and resources to ensure a swift and effective humanitarian response. ©UNICEF/UN025178/Wilander