Carrying their children on their backs and in their arms, worried mothers crowd into UNICEF-supported nutrition screening centers in Tigray, Ethiopia's northernmost region.

More than nine months of insecurity linked to armed conflict between the Ethiopian Government and the Tigray People's Liberation Front has left thousands dead and 2 million displaced across the region. More than 90 percent of Tigray's population — 5.2 million people — now depend on humanitarian aid for survival. 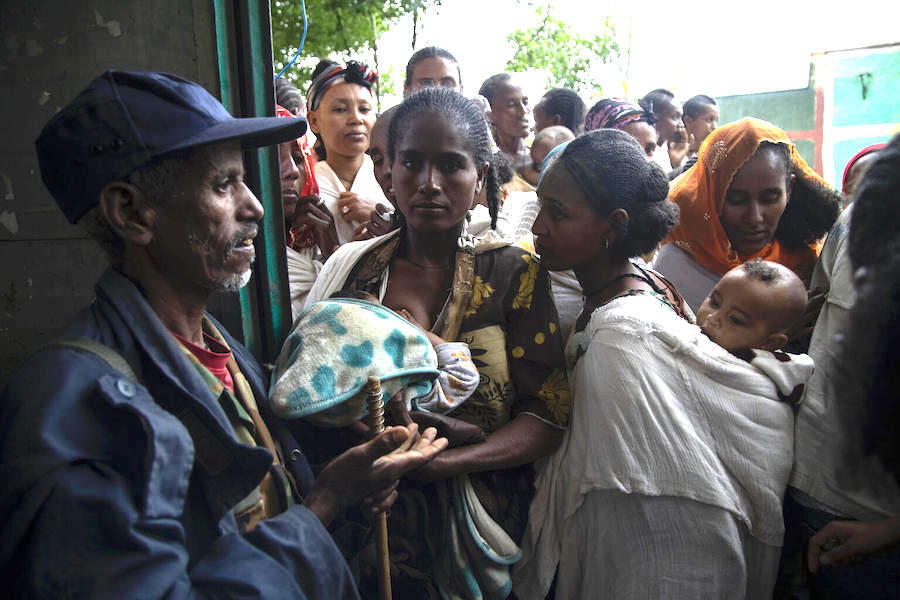 UNICEF has been reaching tens of thousands of children each month with critical health and nutrition support, but many others in Tigray still need assistance. Sobering new screening data indicates that 100,000 children across the region could suffer from life-threatening severe acute malnutrition over the next 12 months — ten times the annual average caseload. 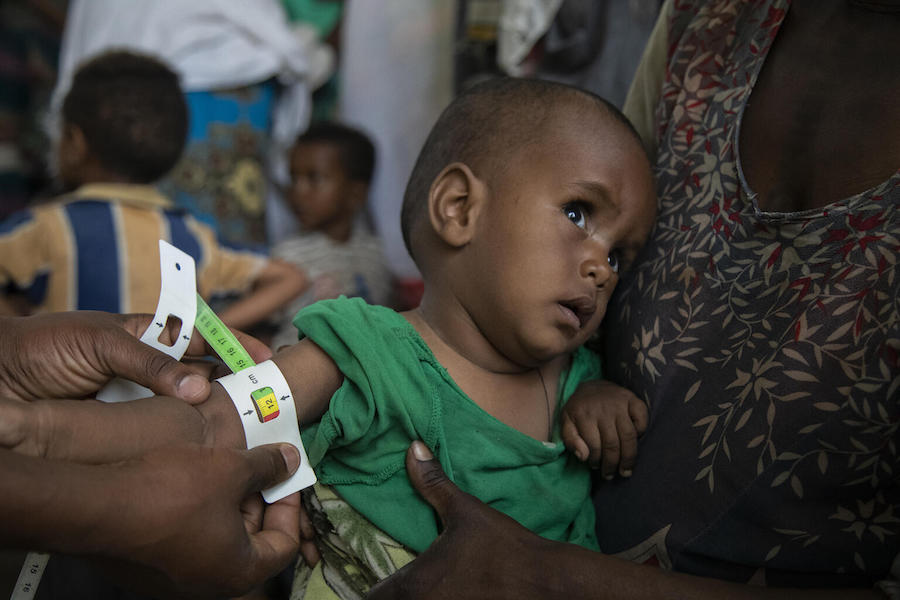 Above, a UNICEF nutrition specialist measures a small child's mid-upper arm circumference using a MUAC strip, a malnutrition screening tool. The measuring tape is in the yellow zone, indicating the child is moderately malnourished. Red means severe malnutrition, which can be fatal if left untreated.

After being evaluated at a nutrition screening center, children suffering from malnutrition are given Ready-to-Use Therapeutic Food, a nutritious peanut paste.  Rising demand is outstripping available RUTF supplies. 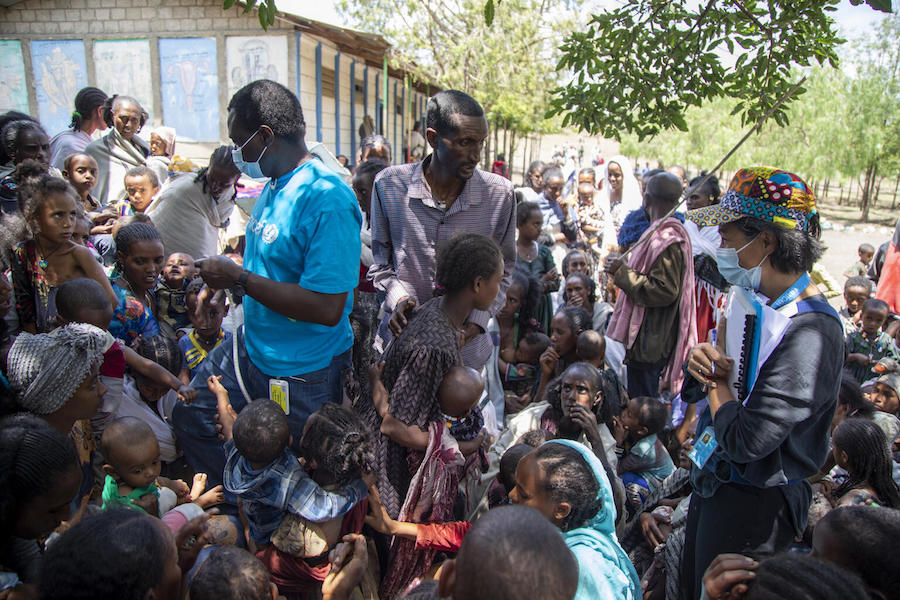 "What I saw was a confluence of conditions that put children's lives at grave risk," Mercado said. "In many places, there were no supplies of the therapeutic foods needed to treat severe acute malnutrition. There were no antibiotics. Health facilities had no electricity. Plus, children had not been vaccinated in months." 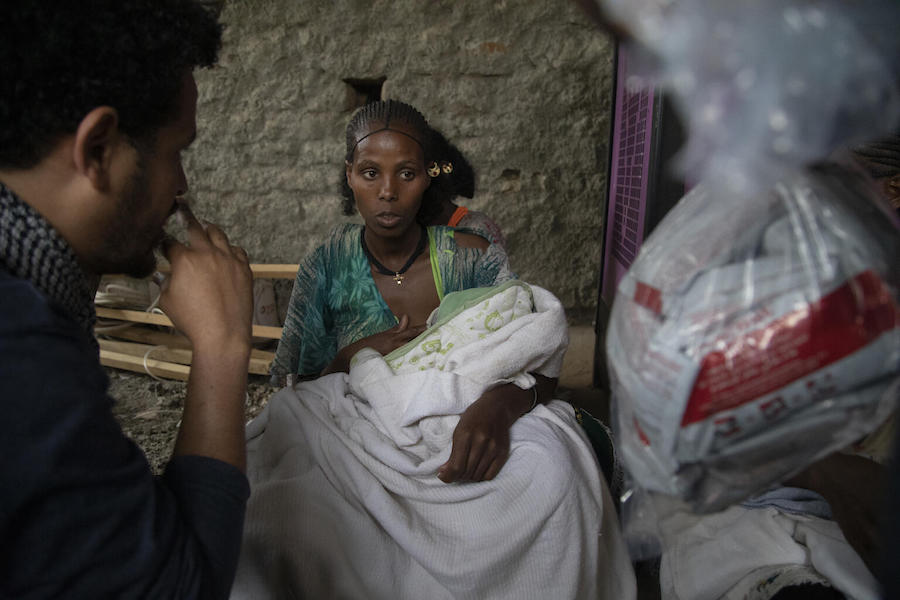 Almost half (47 percent) of all pregnant women and breastfeeding mothers screened in Tigray are also suffering from acute malnutrition, increasing the likelihood of complications related to nursing and pregnancy including maternal death and medically fragile low birth weight babies.

Above, 25-year-old Ababa nurses her third child, 6-month-old Wegahta, who was identified as severely acutely malnourished during a UNICEF screening in Gijet. Ababa, too, is acutely malnourished. The two were sent home with a limited supply of RUTF and high-energy, vitamin-enriched biscuits. 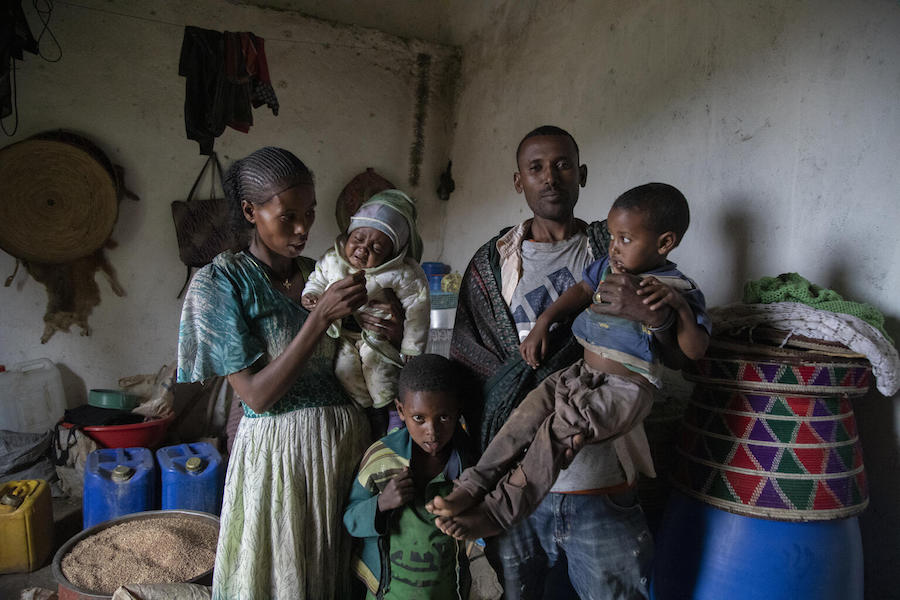 Ababa gave birth to Wegahta at home with only her mother's help, because the health center in Gijet was no longer functioning. Six days later, she and her husband, 28-year-old Mebrhetu, and their children Tsegaye, 6, and Mulu, 3, fled their one-room home to escape fighting that was taking place nearby. 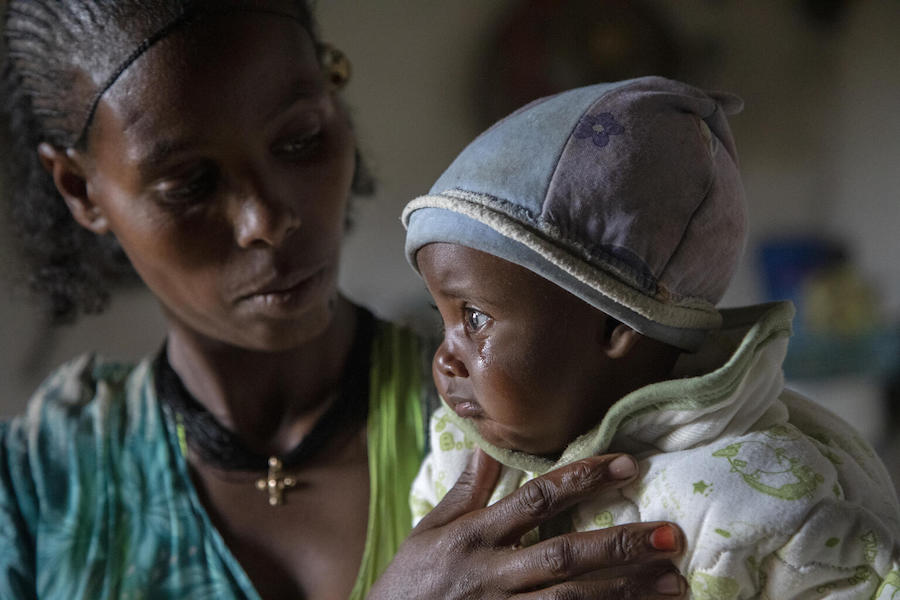 "Our biggest challenge was fear," Ababa said. "I was constantly afraid, worried that we would be attacked. At night, I was unable to sleep. I was always ready to flee." 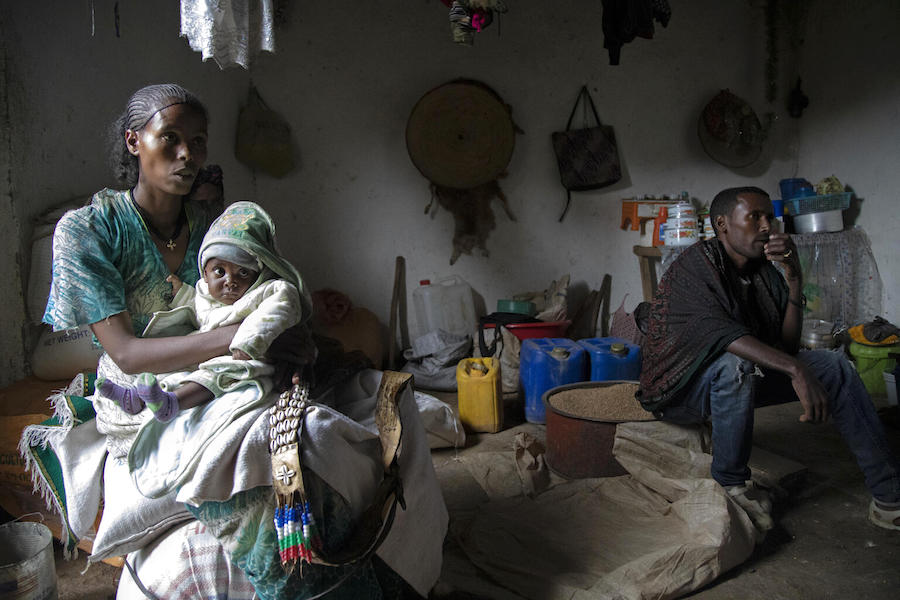 Back in their home in Gijet for now, the family eat and sell eggs laid by their eight chickens. The price of teff, the grain used to make injera bread served at every meal, has increased dramatically. 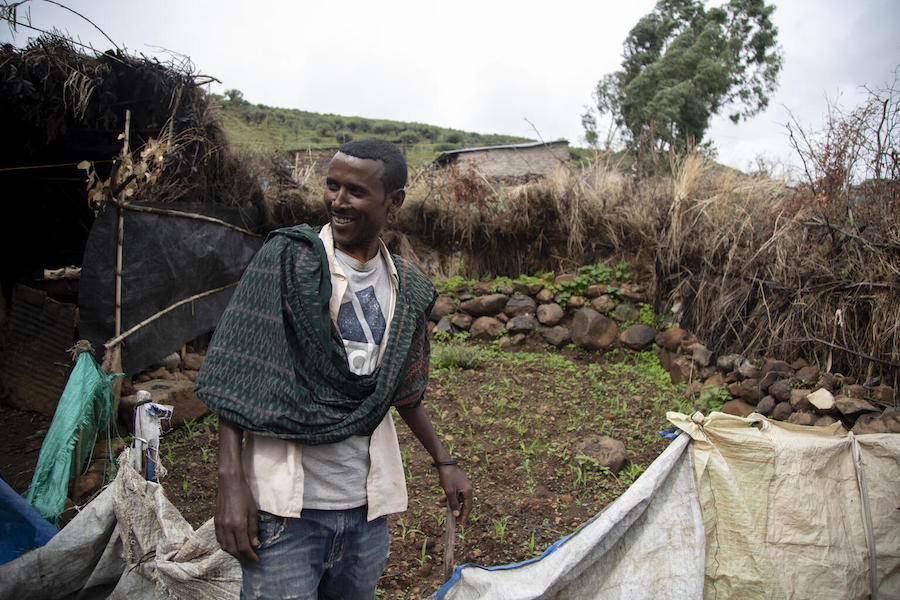 To help feed his family, Mebrehtu has planted some vegetables in the small yard outside their home. Before the war in Ethiopia began, he made his living as a tailor, sewing women's dresses. Now he only works one day a week doing small repairs because there is no fabric for sale in the market and no one has any money to buy anything. 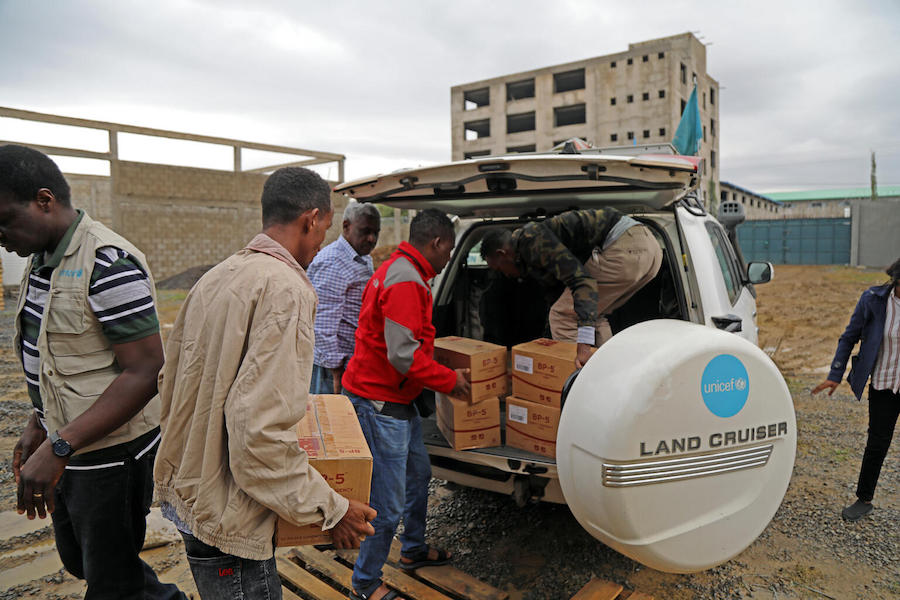 "Our worst fears ... about the health and well-being of children are being confirmed," said Mercado. "We need unfettered access into Tigray and across the region in order to provide support children and women urgently need."

Above, UNICEF workers fill a vehicle with nutrition supplies from a UNICEF warehouse in Mekelle, Tigray's capital. Access to those in need has increased since early July, but the limited availability of fuel, supply shipments and reliable communications continues to hinder efforts to reach children and families with the goods and services they need to survive the ongoing crisis. 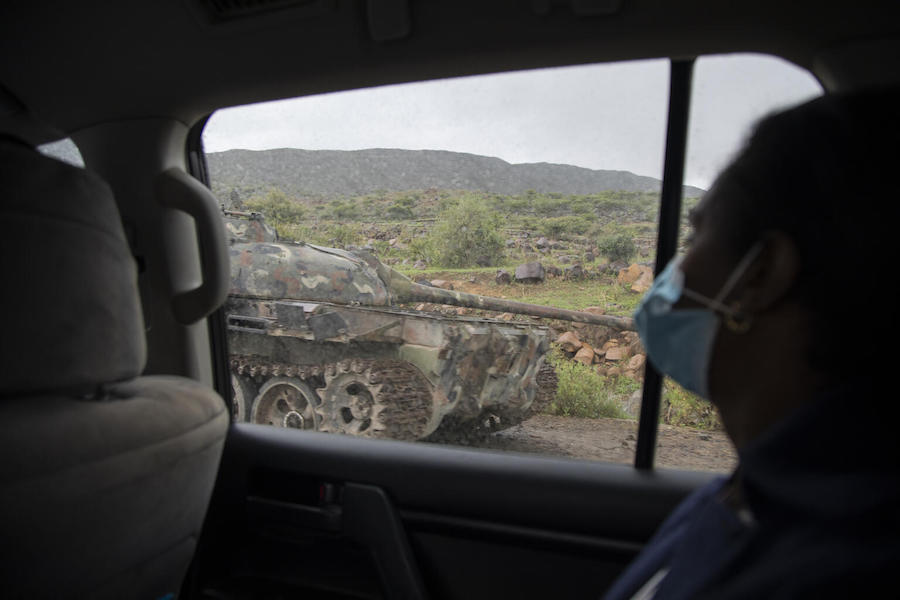 The operating environment in Tigray remains extremely dangerous. United Nations spokesperson Jens Laerke noted that at least 12 aid workers have been killed in the region to date. On the way to a nutrition health screening in Gijet, a UNICEF vehicle passed a tank and other military equipment at the site of an earlier confrontation, above. 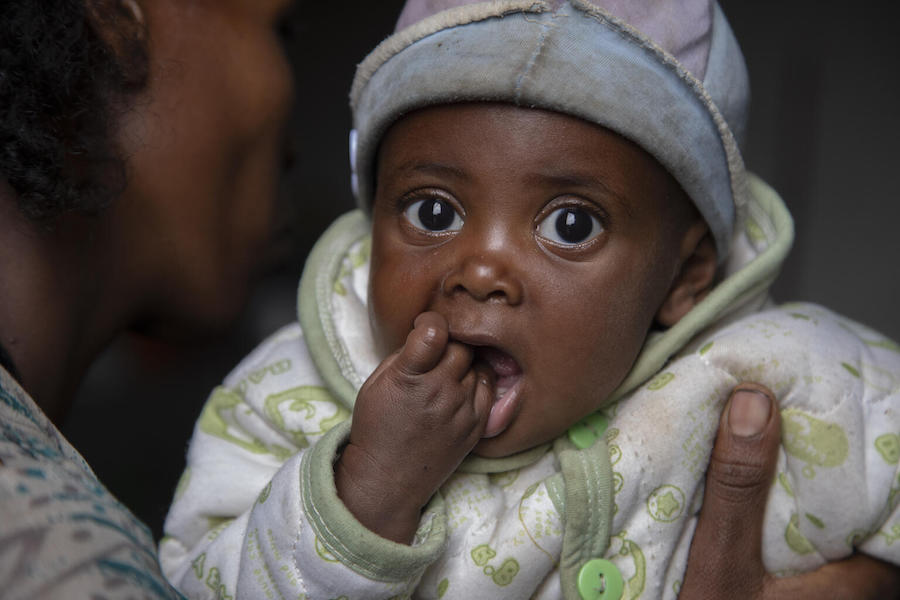 UNICEF has been working with partners since November 2020 to reach people in Tigray in need of emergency aid and protection. The therapeutic food Ababa received will restore baby Wegahta to health. But there are many more children who still need assistance.

"The humanitarian crisis spreading across northern Ethiopia is being driven by armed conflict and can only be resolved by the parties to the conflict," UNICEF Executive Director Henrietta Fore said on August 9. "UNICEF calls on all parties to end the fighting, and to implement an immediate humanitarian ceasefire. Above all, we call on all parties to do everything in their power to protect children from harm."

Help UNICEF step up its lifesaving work to end malnutrition in Ethiopia. Your contribution can make a difference.

Top photo: Ababa, 25, brought her 6-month-old baby girl, Wegahta, to a UNICEF-supported nutrition screening site in Gijet in southern TIgray, Ethiopia on July 20, 2021. Both mother and daughter were acutely malnourished. Nutrition specialists sent them home with Ready-to-Use Therapeutic Food for Wegahta and high-calorie, vitamin-fortified biscuits for Ababa. Photos by Christine Nesbitt for UNICEF