U-Report gives kids in danger a voice — and a way to reach out for help.

Within minutes of learning Hurricane Irma’s trajectory on September 2, the UNICEF Latin America and Caribbean office in Panama was on the phone with UNICEF's Global Innovation Center in Bangkok. They were busy getting the experts and systems in place to launch U-Report in the Caribbean and promote it via Facebook.

Within hours, they had set up a lifeline for youth and adolescents.

Half of the teens polled by U-Report said this was the only source of emergency preparedness advice they had been able to find.

U-Report is a communications platform that engages easily accessible SMS technology — texting — to collect and disseminate potentially life-saving information for adolescents. Equally important, U-Report gives adolescents a voice — and a way to reach out for help. U-Report is among UNICEF and partners' groundbreaking innovations for good.

UNICEF and partners regularly use U-Report to send out polls to learn what concerns and issues adolescents and teens are struggling with, and find out how best to reach them with potentially life-saving information. And that information is expressed in highly shareable teen-speak, by region. U-Report played a key role in UNICEF's successful fight against the spread of the deadly Ebola virus in Liberia in 2014. 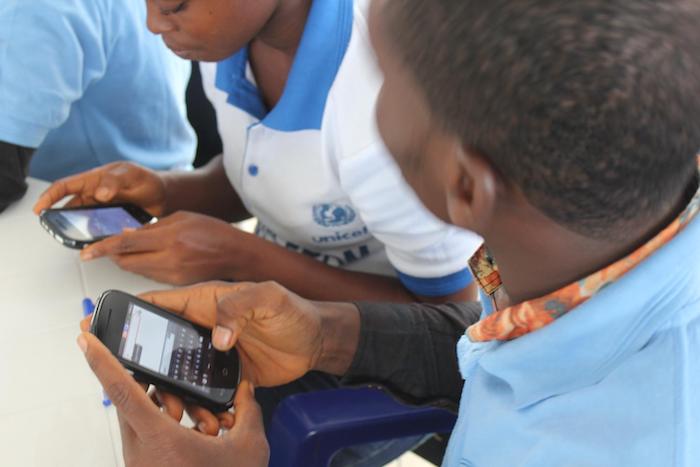 in Liberia, "social mobilizers" learned to record survey data using their mobile phones so they could fight the spread of Ebola as U-Reporters.

Within 24 hours of learning the wrathful Hurricane Irma’s path, UNICEF had used U-Report to send ‘how to stay safe’ messages to 2,500 people; 48 hours later, that number stood at 8,500. By September 6, a new U-Reporter was accessing information about Hurricane Irma every 10 seconds. And in the Caribbean, that means having all information available in English, Spanish and French.

More than 10.5 million children live in the countries exposed to Hurricane Irma’s destruction. As the storm passes, UNICEF is using U-Report to help gather information about who needs help, and where. In turn, UNICEF can start responding effectively to the needs of affected children.

Like clockwork, UNICEF’s Supplies Division in Copenhagen takes its cue, and in the largest warehouse in the world, supplies are packed and loaded into planes.

Help is on the way.

Like clockwork, UNICEF’s Supplies Division in Copenhagen takes its cue, and in the largest warehouse in the world, supplies are packed and loaded into planes. Help is on the way.

Please support UNICEF in getting emergency relief to those most in need all across the globe. Text RELIEF to 864233/UNICEF to make a $10 donation for children impacted by natural disasters. To donate for Hurricane Harvey relief, click here. A full 100 percent of your donation goes directly to helping kids recovering in Houston.