Since war escalated in late February, UNICEF has delivered over 8,500 metric tons of emergency supplies to Ukraine — from health and medical equipment to education kits to water purification tablets — to support impacted children and families. A look at how UNICEF kicked its already formidable supply operation into high gear and continues to adapt to meet urgent needs across the country.

This article was reported by Ian Lacey and originally appeared on the UNICEF Supply Division's website.

When war escalated in Ukraine six months ago, UNICEF immediately scaled up its emergency response to meet the urgent needs of millions of children and their families. A major component of that response: rushing humanitarian supplies from UNICEF's global hub in Copenhagen to distribution points inside the country against a backdrop of complex policy environments, access issues and ongoing security concerns.

To pull this off, UNICEF's global supply team had to get creative while leaning into decades of expertise in rapid humanitarian response.

At first, UNICEF had only a single supply route through Poland into Ukraine, where a warehouse was set up on the grounds of an old chicken factory in Lviv.

Originally intended as a temporary solution, that warehouse has since become a critical piece of infrastructure for UNICEF's entire supply operation inside Ukraine, serving as the primary storage and collection point for supplies heading for children and families throughout the country.

"In the first few weeks of deliveries, we weren't sure how long it was going to take to get supplies in; we were finding our way,” recalls Emma Maspero, UNICEF Supply Division’s Senior Emergency Manager. 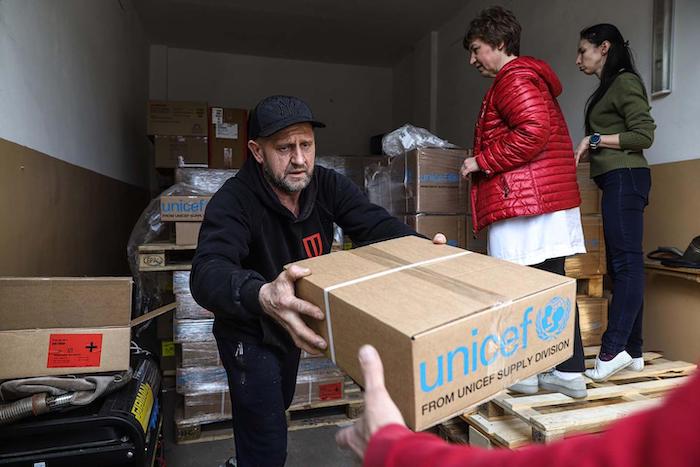 A man helps unload boxes of emergency supplies from UNICEF outside Regional Child Hospital in Zaporizhzhia, Ukraine, on March 30, 2022. © UNICEF/UN0625327/Klochko

UNICEF is now using larger warehouses with better equipment and more loading bays in strategic locations to try to reach as many communities as possible. This helps keep the supply and logistics pipeline running, making it easier to receive and dispatch trucks bound for municipal distribution points. The addition of a Dnipro supply hub has also been instrumental in expanding UNICEF's reach. The closer the warehouses are to those in need, the quicker UNICEF can get supplies into their hands.

It has also become easier to find drivers, which has helped stabilize staffing. Now there are an average of 10 to 20 trucks arriving at UNICEF’s Lviv warehouse every day.

Keeping regular supplies flowing into Ukraine during wartime remains a challenge, however. “It’s far from being a perfect pipeline, and we're always going to be looking at ways to expand it,” says Jean-Cédric Meeùs, UNICEF Supply Division’s Chief of Transport. “We are always aiming to push supplies through faster because the volume that the UNICEF Ukraine office is ordering is mind-blowing. It's bigger than we've ever seen before.”

Another move that has proved beneficial: UNICEF's Supply Division sent warehousing and logistics experts to provide on-the-ground support to colleagues inside Ukraine. For every emergency, Meeùs explains, "we must always adapt our supply chain according to the context and the environment."

A big part of that is to be always thinking of new ways to improve the flow of goods. UNICEF is dependent on local knowledge about not just where to deliver supplies, but what supplies to deliver within communities. This means exploring other networks, including relying on volunteers, communities and local authorities in hard-to-reach areas. Where formal distribution networks do not exist, innovation is essential.

"Every colleague that has left on assignment is building on someone else’s work," Meeùs says. "We can’t just think outside the box, we must not see a box in the first place.”

We can’t just think outside the box, we must not see a box in the first place. — Jean-Cédric Meeùs, Chief of Transport, UNICEF Supply Division

While the war rages on, UNICEF's goal will be to remain flexible and able to make adjustments as the situation — and seasons — change. In late summer, UNICEF Supply added $40 million in purchase orders to the pipeline  — blankets, coats, boots and other winter supplies that UNICEF plans to ship to roughly 1,000 distribution hubs across Ukraine this fall in order to reach around 450,000 children in need before the cold weather sets in.

According to UNICEF's most recent situation report, since Feb. 24, 2022, UNICEF has:

Help UNICEF reach more children and families impacted by the war in Ukraine with assistance they urgently need. Donate today. 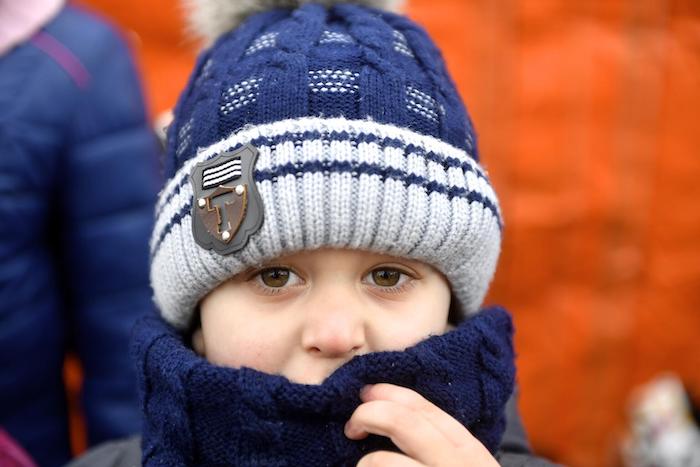 Yaroslav, 4, fled to Romania with his mother and siblings from their home in Chernivtsi, Ukraine, to escape the war. Since February, UNICEF has been sending emergency supplies to support the urgent needs of children and families inside Ukraine and in refugee-hosting countries. © UNICEF/UN0599215/Nicodim

Top photo: A view of the packing line inside UNICEF's supply warehouse in Copenhagen, as School-in-a-Box kits are assembled to be shipped to Ukraine to support students whose schools have been damaged or destroyed by fighting. UNICEF has delivered over 8,500 metric tons of emergency supplies to Ukraine since Feb. 24, 2022, to meet urgent needs. © UNICEF/UN0659883/Asamoah